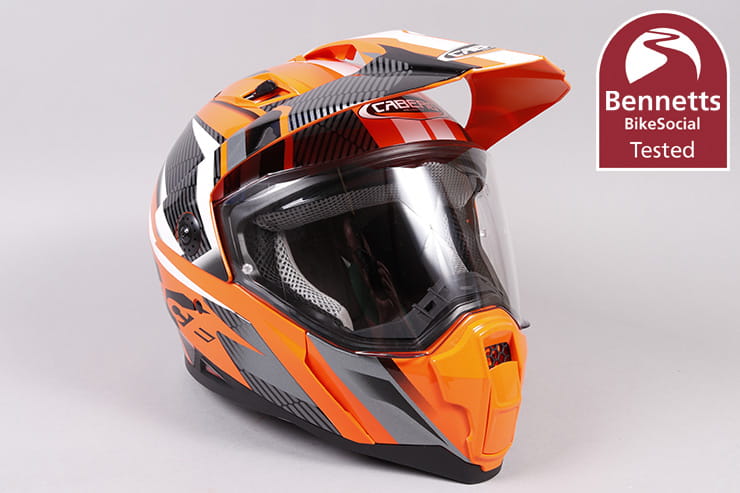 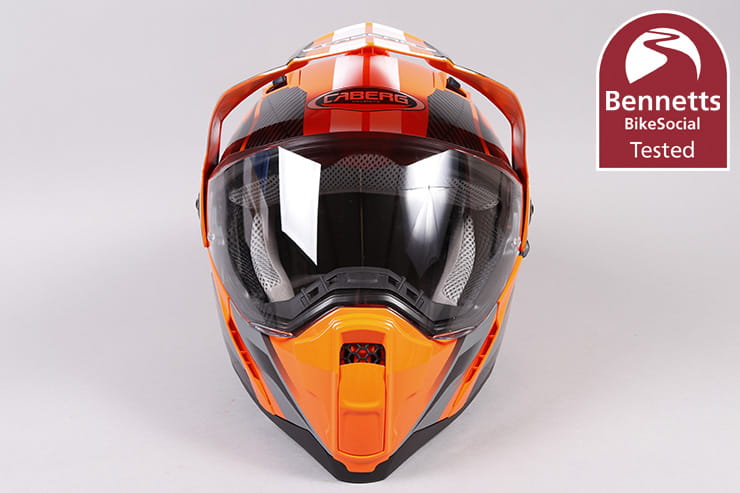 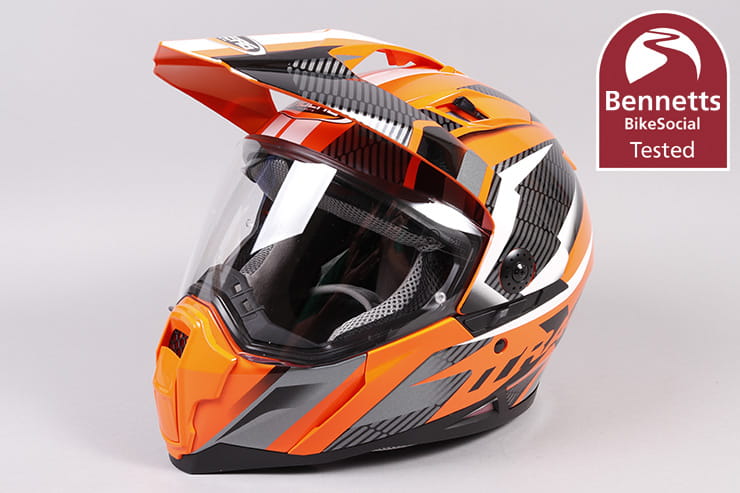 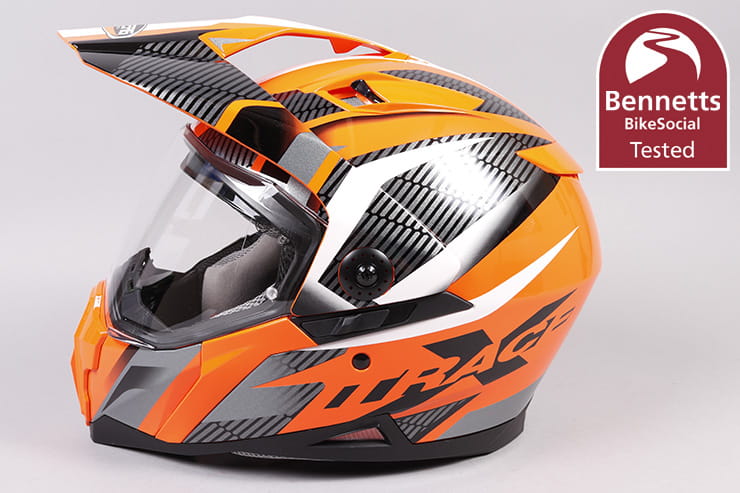 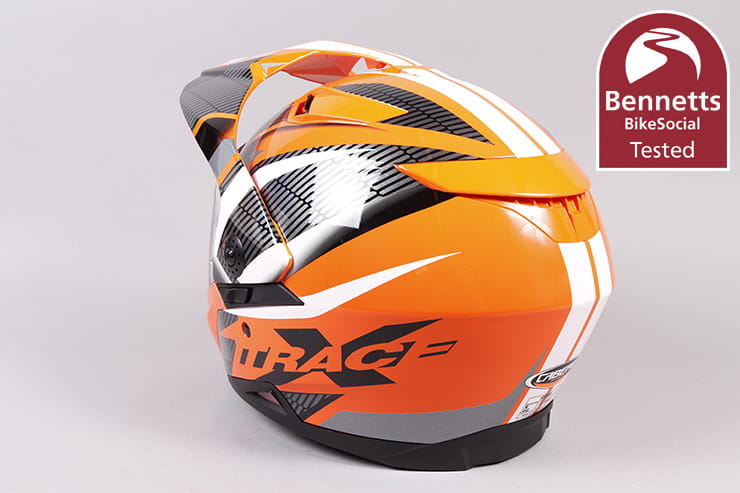 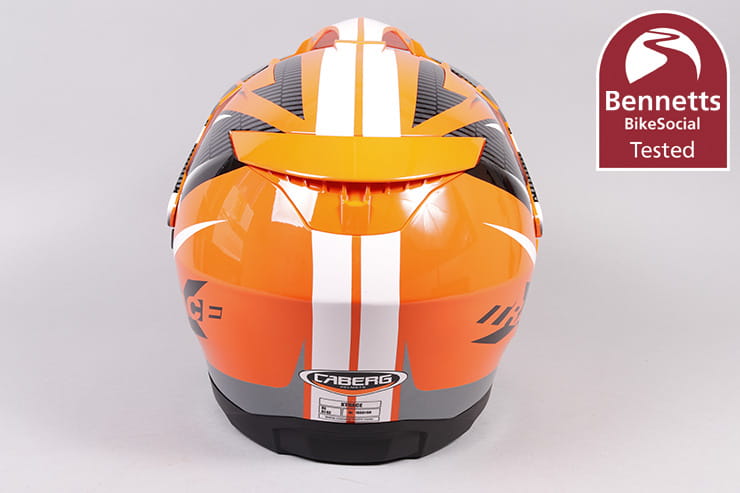 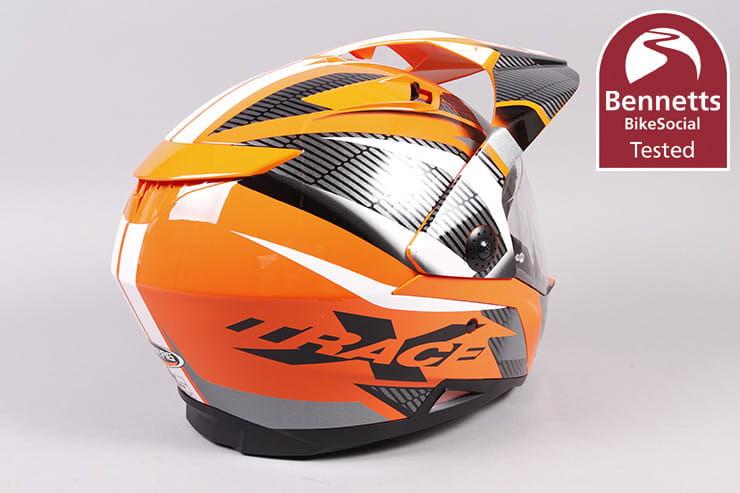 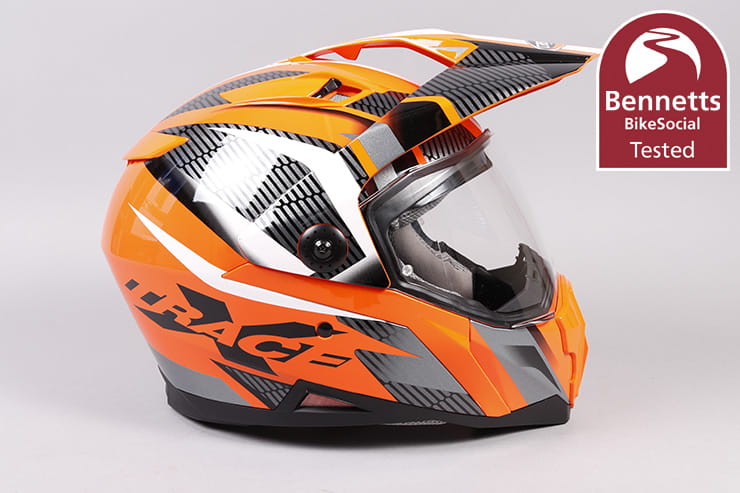 I’ve been wearing this Caberg X-Trace Savana over several months, through good weather and what proved to be some very wet days. It’s been used for well over 2,000 miles on- and off-road in Wales and England, as well as a five-day tour around Scotland, all while on my Honda Africa Twin…

The shell is made from ABS plastic and comes in two outer sizes covering XS to L and XL to XXL, so a small doesn’t have the huge silhouette of an XXL.

The Caberg X-Trace conforms to ECE 22:05, meaning that while it’s of course fine to use in Europe, it’s not approved if you’re exploring in the USA or Canada.

The overall finish is fine, though this is a budget lid. Little things like the vent slides and the plastic finishing rim around the bottom feel cheap and hard to the touch, especially at the back.

Caberg says the shell weighs 1,550g +/– 50g. The large I have came in at 1,550g, but as it can be worn in a number of configurations it goes up to around 1,600g once the peak and visor are added. It’s certainly not heavy thought there is an obvious drag at motorway speeds caused by the peak when doing shoulder checks. But nothing untoward and it certainly doesn’t feel like it’s going to fall to pieces when exposed to that drag. 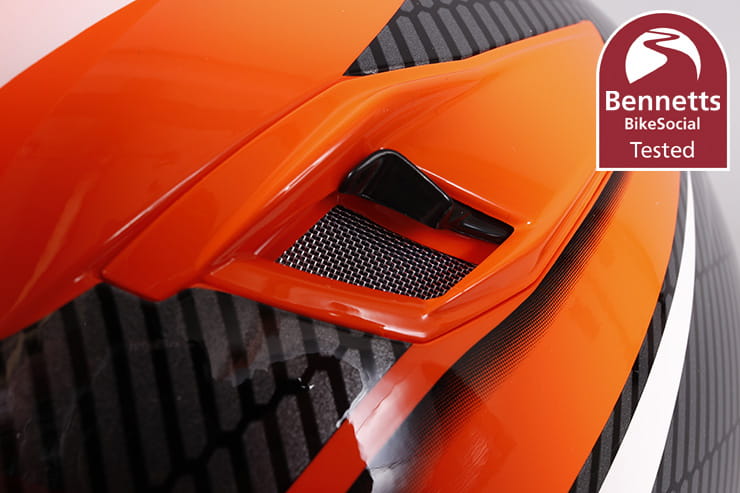 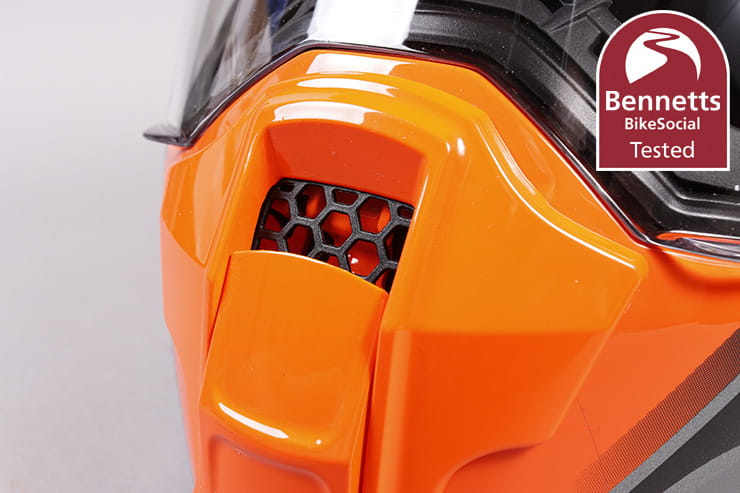 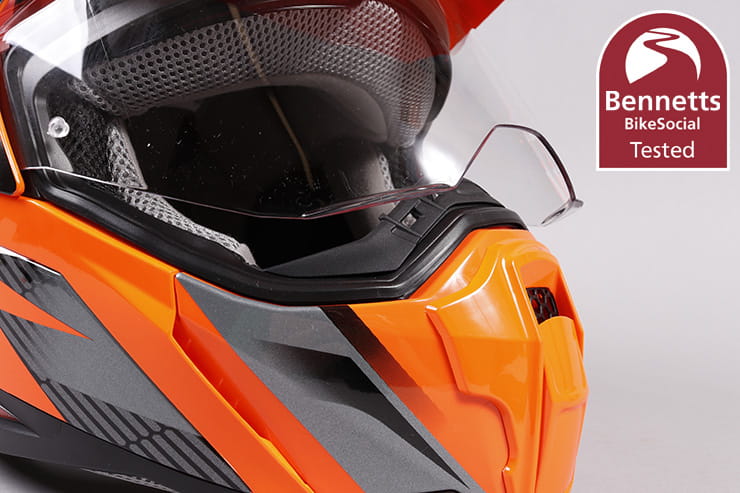 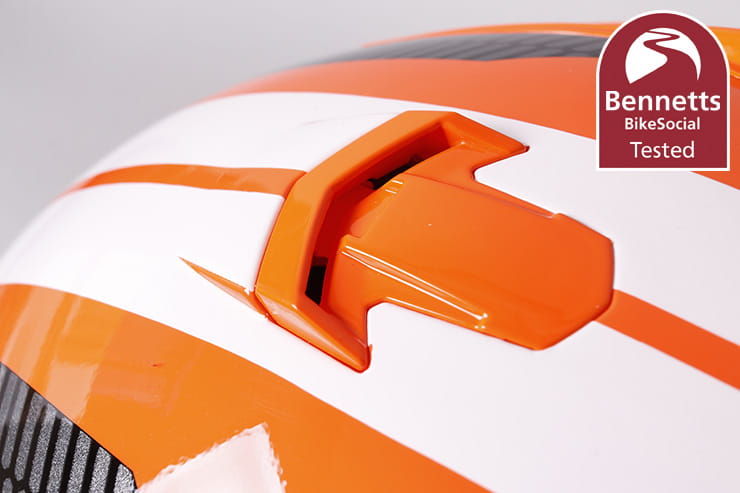 There’s a large two-stage open or closed vent on the chin that’s easy to find and operate with a gloved thumb, along with two stage open, or closed, vents on the top that are also easy to operate once you’re used to them.

The quality of the plastic doesn’t feel that good, and while one still works fine the other has become sticky; keeping them clean helps but they are still hard to operate at times with a glove on.

There’s a large, always open exhaust vent at the rear to aid circulation and overall the vents do provide a noticeable change inside the helmet, though it’s worth noting that the chin vent doesn’t feed to the mouth (like many adventure helmets do), and the scoops on the sides of the chin are decorative only. 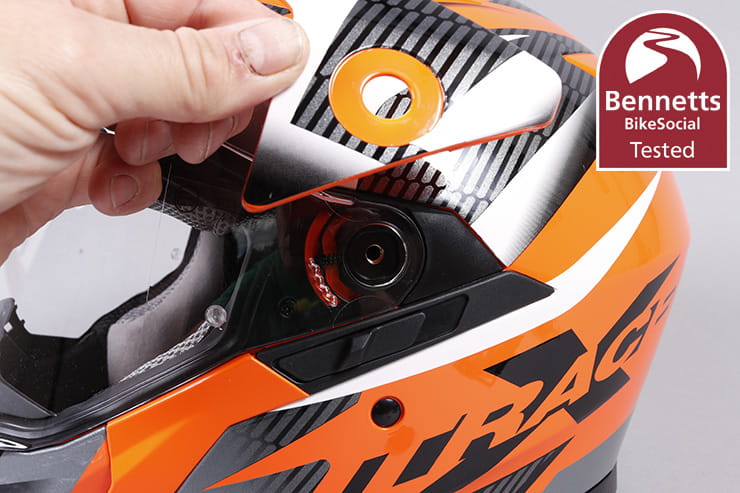 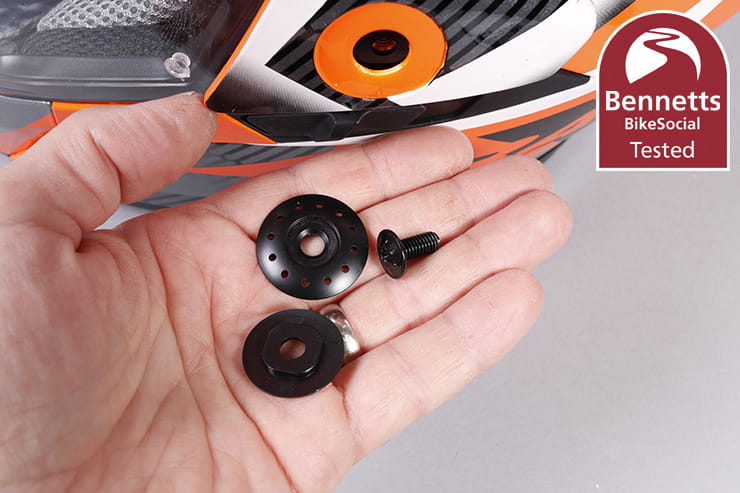 The helmet can be worn in a number of configurations:

The Italian Caberg catalogue shows the visor and peak being held on by a screw with a knurled top that you tighten with fingers, but this helmet arrived with a very similar screw but with a Phillips head. (Who carries a screwdriver with them to change visor?) I asked the importers Feridax for a replacement screw set and the knurled one turned up as per the catalogue.

In full configuration with visor and peak, which I predominantly wore, the visor performed well and didn’t let any let rain in. It’s anti-scratch and Pinlock-ready thanks to pins fitted, but if you want to avoid misting up you’ll have to purchase one separately (£27.99 RRP), so factor that into the price. I bought one and maintained good vision through the worst of the weather.

Should you require the visor up a little when riding there are four stages after closed in the mechanism, though there’s no ‘just-cracked’ setting.

There’s a decent field of view so I didn’t feel restricted, plus there’s also a slide-down sun visor (also anti-scratch); the slide to operate it is easily used once you know where it is. 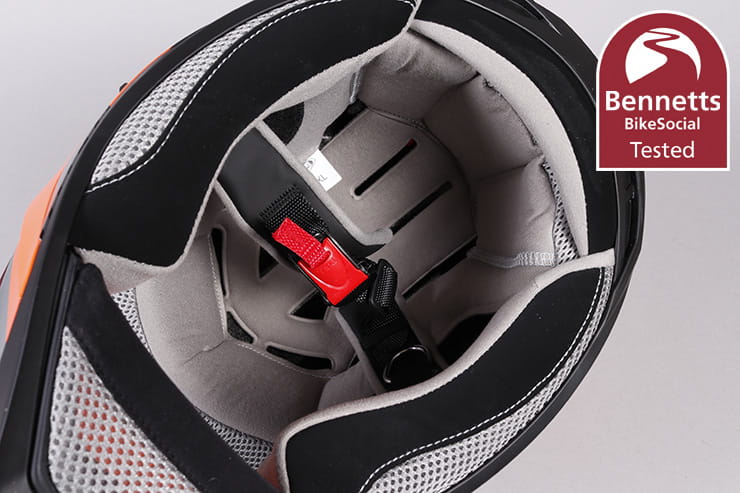 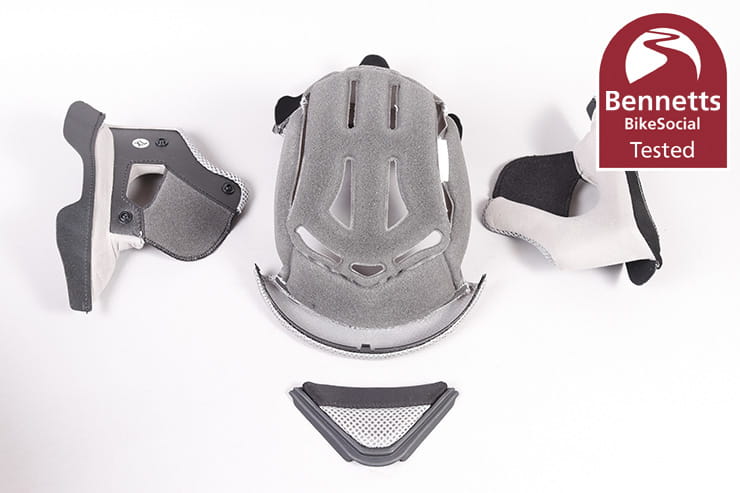 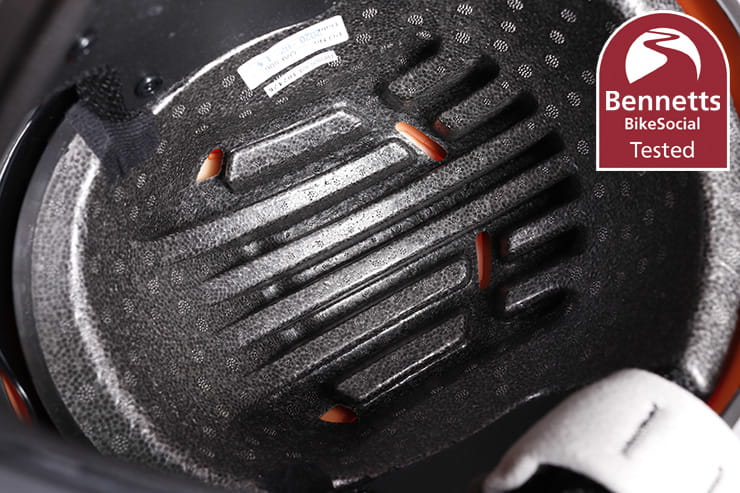 The lining is fully removable and washable, and comfortable during all-day wear, and there’s a comfortable mesh wind guard under the chin that’s also removable.

The expanded polystyrene (EPS) inner shell is a single density with deep grooves that allow for varied impact transfer across various areas of the skull in an accident. This is typical of lower-priced helmets, whereas the more expensive ones will often have multiple-density EPS. 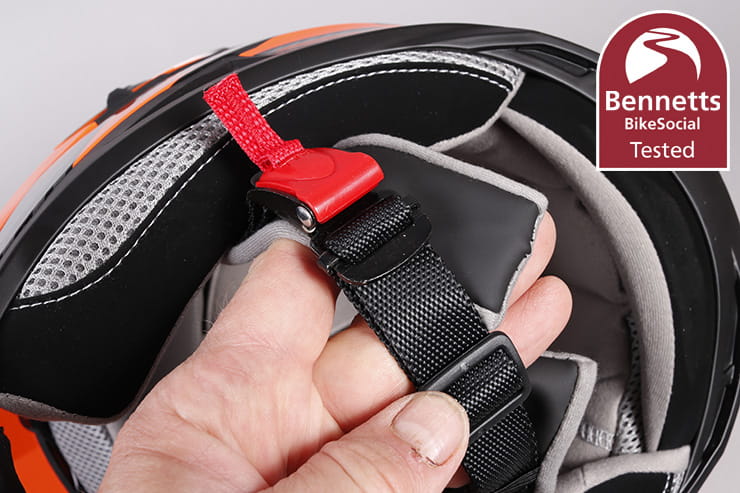 The Caberg X-trace has a quick and easy to use micrometric fastening strap that operated without fault and is covered in soft-touch material, so doesn’t rub or irritate. These fasteners have the advantage of being operable with gloves on.

The sizing is in line with what I normally wear; a 61cm is an XL and there’s room for my spectacles.

There aren’t any hollows for comms system speakers, but the padding in the liner is such that I got a pair of in that didn’t place undue pressure on my ears. 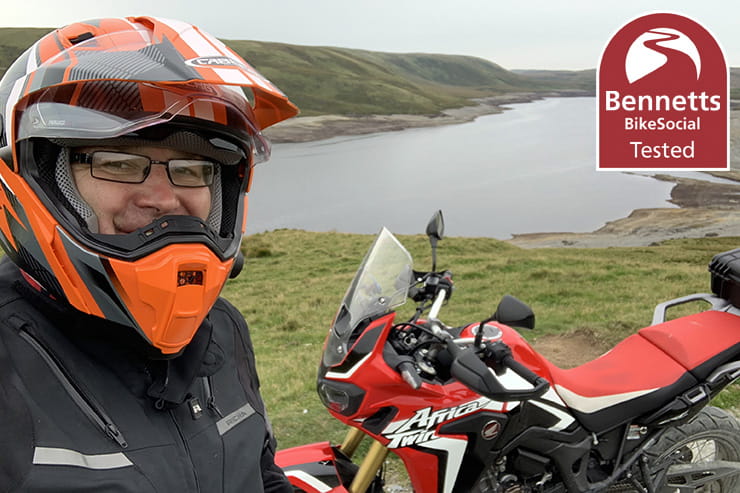 The X-Trace isn’t really any noisier or quieter than other helmets l’ve worn, but you should always wear earplugs when riding to protect your hearing, I wear custom moulded ones.

If I’m riding off-road, I prefer having a helmet with a peak as it gives a sharper contrast for uneven terrain. It’s a similar effect when snowboarding and the light goes flat – there’s no contrast and you can’t plan your ride.

When I’m riding predominantly on motorways I do prefer a plain full-face. For the relatively low price, the Caberg X-trace has got plenty of features like the adaptable configurations and drop-down sunshade visor.

It’s a shame the Pinlock insert isn’t included as for winter riding it’s pretty useful but overall I found it comfortable for all-day wear, including some gentle off-roading.