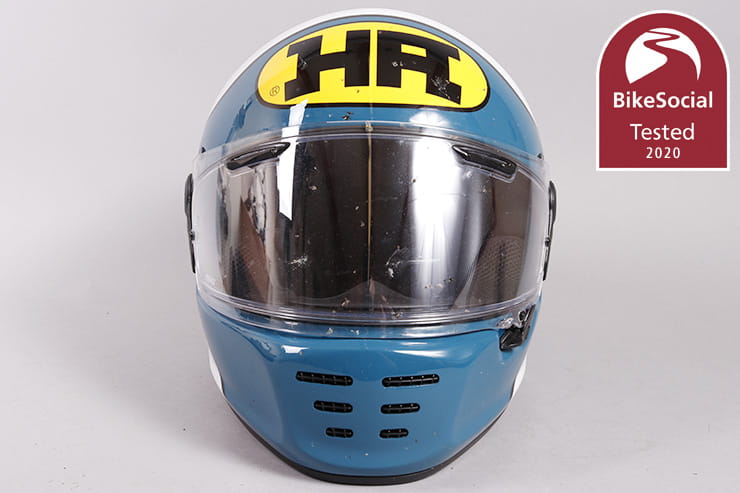 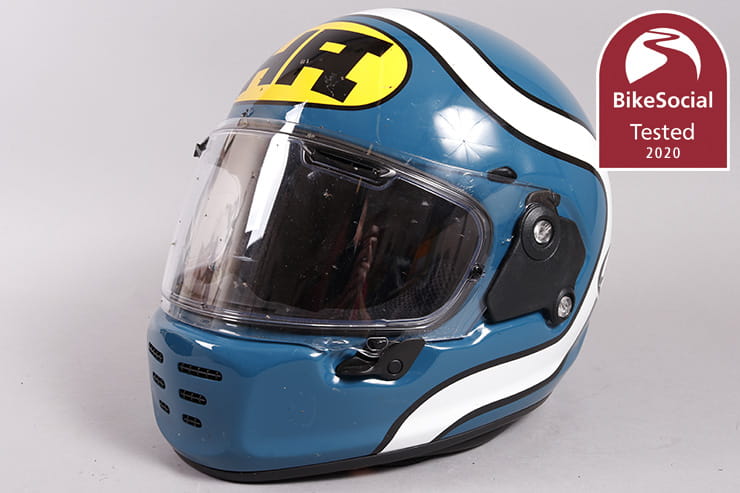 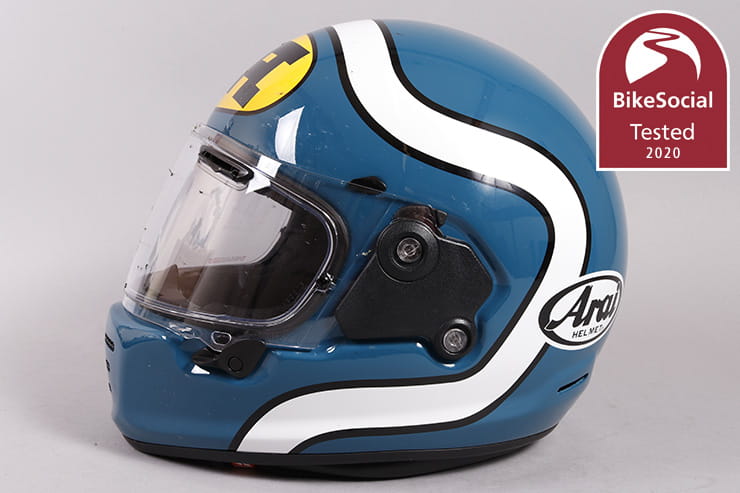 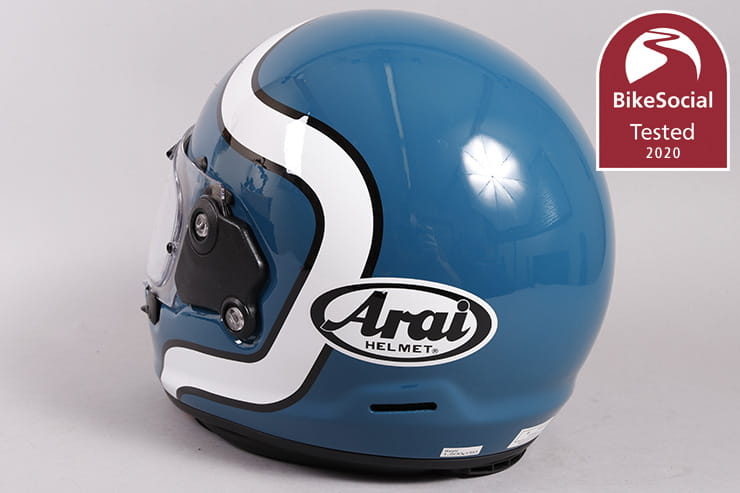 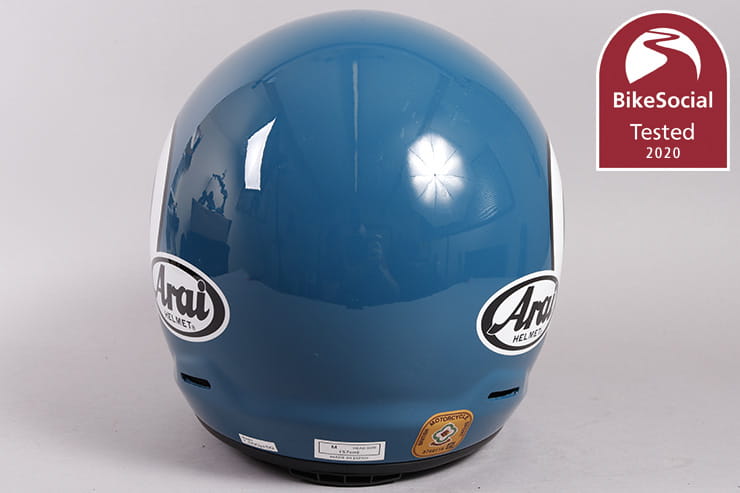 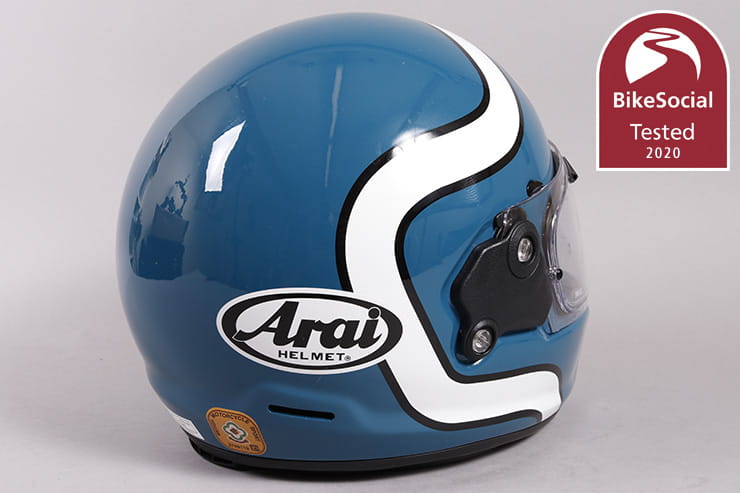 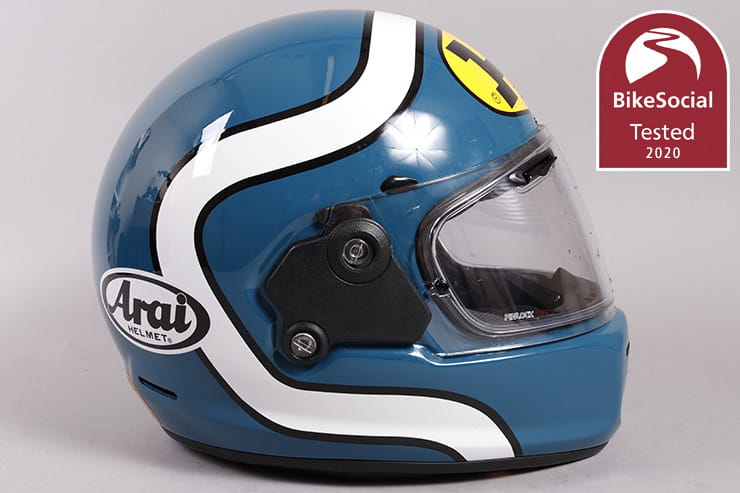 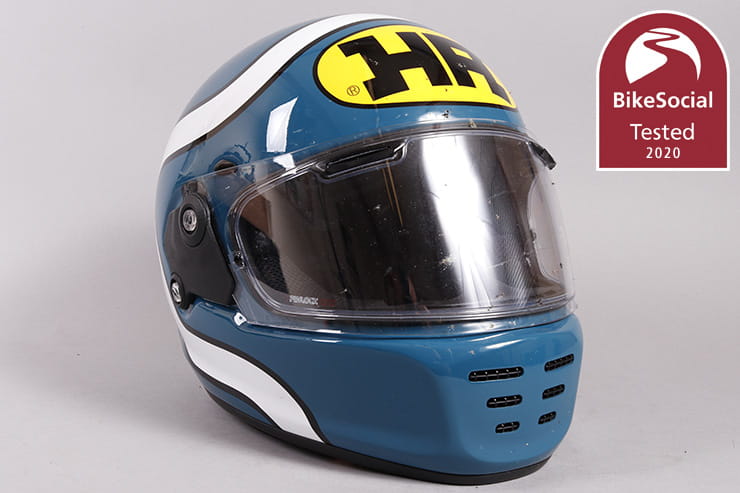 The Arai Rapide – with its clean lines and aggressive chin shape – is a helmet designed to appeal to classic and retro-style motorcycle riders. I’m reviewing the version with the HA graphics, which carries the original logo first used by the company’s founder – Hirotake Arai – in 1956, and ridden with it on a Royal Enfield Interceptor 650, Kawasaki W800, Kawasaki Versys 1000 and a BMW S1000XR…

The ACU Gold-approved Arai Rapide uses the company’s multi fibre and resin construction to create an extremely strong outer shell; this design allows any impact force to be spread across a larger area, before being transferred to the skull via what’s a much softer inner than on some other lids. The smooth silhouette of Arai helmets is also designed to glide during an impact, rather than snag and snatch the head, which can cause torsional injury to the brain. It’s along the same lines as what MIPS is aiming for in some other lids.

Having a soft liner can make for a more comfortable helmet as it conforms more readily to the intricacies of your own head, and Arai has a unique construction method that blends multiple densities of expanded polystyrene (EPS) into one single insert, maintaining the integrity of that part; most other manufacturers use several pieces of different density polystyrene in their helmets.

This HA version has very simple graphics, but they’re clean, sharp and well-applied, with a deep gloss over everything. You can also get this design in green or yellow, or there’s a ‘Number’ version (with no numbers on, but more complex graphics and the standard Arai logo) in three colours for the same price of £529.99. A plain version in gloss or matt black, white or grey costs £449.99 (the white looks particularly cool, with echoes of the old Simpson Bandit thanks to the chin section).

Like all Arais, the Rapide is handmade in Japan and inspected five times before leaving the factory.

Weighing 1,585g, the Arai Rapide is at the lighter end of the Arai range, but there are of course many lighter lids on the market. Whether that matters of course is another issue – I’ve never worn any helmet that I considered too heavy in use; the only time any difference has been noticeable is when picking up various lids. On the head, it really doesn’t matter. 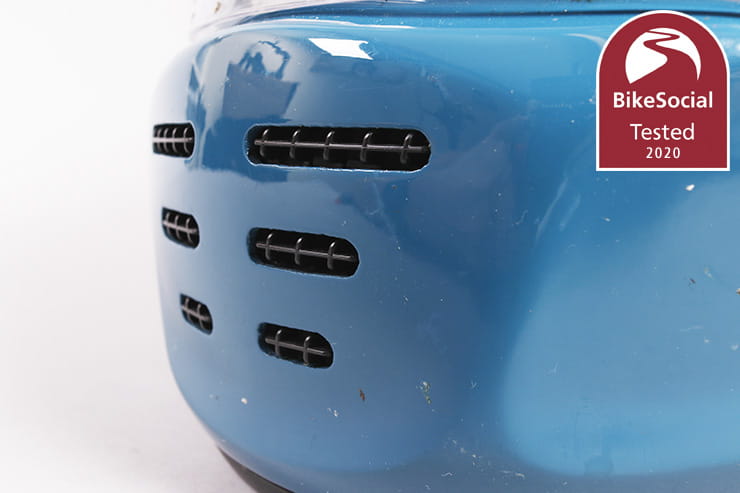 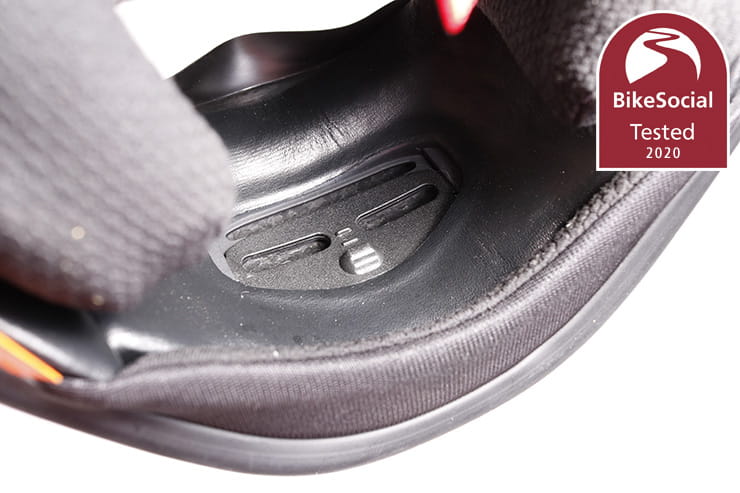 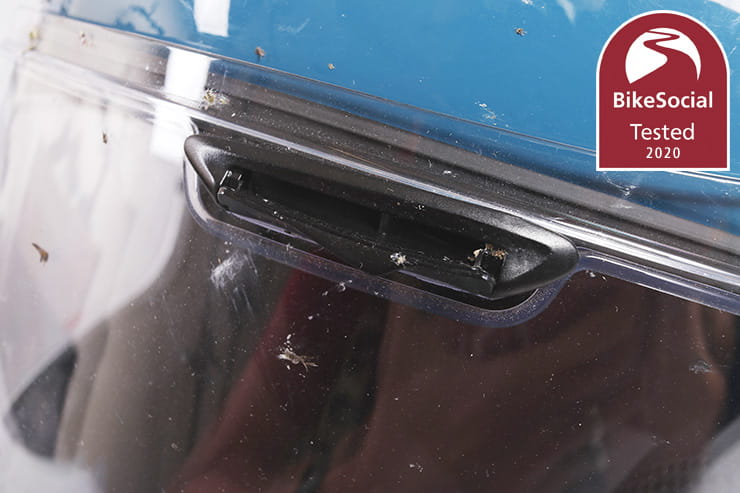 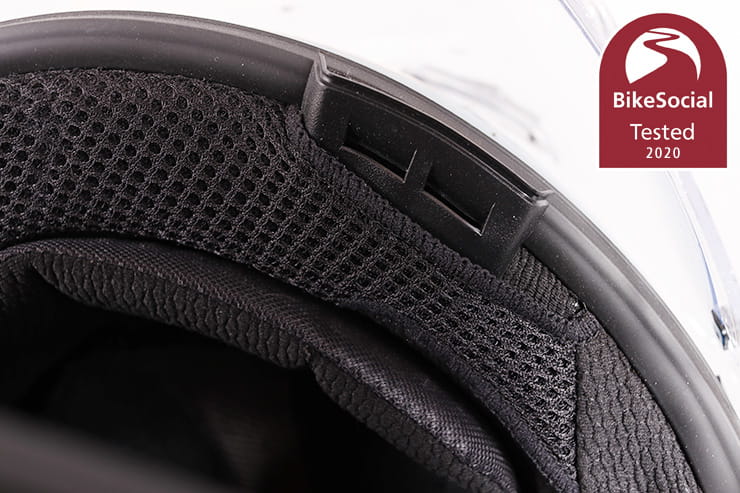 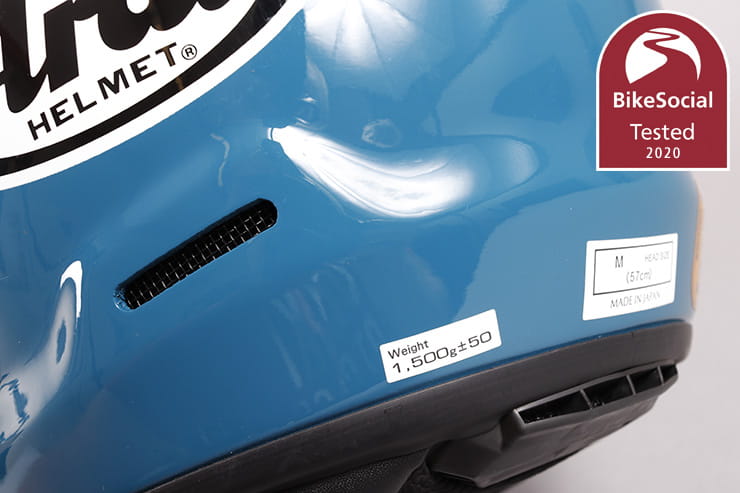 Thanks to its old-school styling, the Arai Rapide doesn’t have much in the way of vents stuck on it, but it’s far from stuffy.

The chin has six vent slots filled with what looks like wire mesh but is actually a plastic grid that won’t deform like wire can. This is always open to feed up over the inside of the visor, but there’s also a sliding cover inside that, when opened, allows air to be directed straight to the mouth. This is a bit of a fiddle to get to with gloves on, but it’s a large surface so you soon get used to it; it’s a lot easier than the tiny sliders fitted to the previous Arai Renegade V, which tended to jump out of their guides.

The visor has closeable vents built into the top that feed the brow… and that’s it for external vents.

But there is more hidden inside – three roughly 8mm holes draw air away from the head and between the EPS liner and outer shell, via a pair of rear/side exhaust ports (wind passing over the lid will draw air out of here), and another rubber vent built into the back of the neck skirt, which also has ports encouraging wind to blow through and pull air out of the helmet.

Needless to say, having ducted vents on the top of the lid would be more effective, and this is no race lid when it comes to venting (the RX-7V is up there with the very best), but it does work, stopping you from getting too hot, too quickly.

This isn’t the kind of helmet that’ll be worn by riders who are climbing all over their bikes while pushing them to the limit, and Arai has done an admirable job of maintaining a reasonable level of ventilation in a classically clean design.

With the internal vent shut, thanks to air movement around the chin area and up past the visor, the Rapide is never truly sealed so I’d think twice before buying this as an all-year-round helmet. You could commute in it of course, but if you ride through winter there’d be better choices, though not with the classic styling. 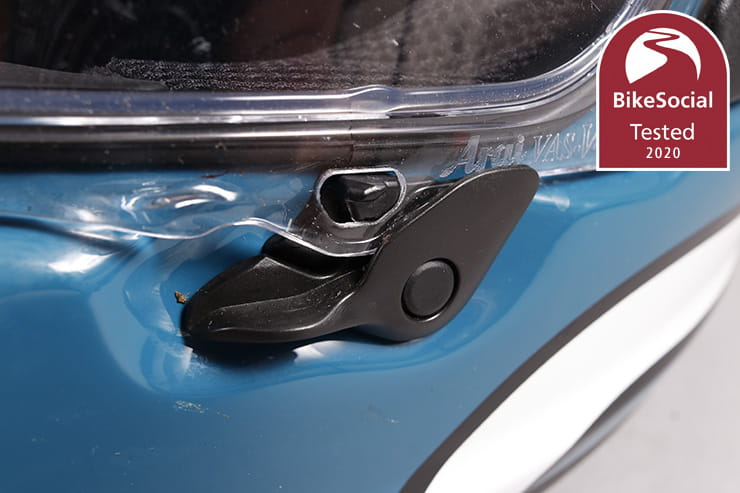 Misting of the visor isn’t an issue thanks to the top-of-the-range Pinlock Maxvision 120 anti-fog insert supplied. Spectacle wearers like me though will need to crack the visor open in colder weather to prevent them from misting.

Opening the visor while stopped at traffic lights with the clutch held in would be easier if there were left and right tabs (or a central one), but like all Arais, the visor locks down on the left. The Rapide uses the latest visor design, which latches with a solidly-made plastic thumb tab. A new user will no doubt take some time to get used to this system, but once you fathom the motion of sliding your thumb up to release, it works well.

I’m a fan of the infinitely-adjustable positioning of Arai visors, preferring it to the ratchets used on the majority of other lids. I also really like the quick-release system employed by Arai, despite it not being universally adored. It’s a shame then that this visor, while being the same as others in the Arai range, is one of the fiddliest I’ve ever had to remove… 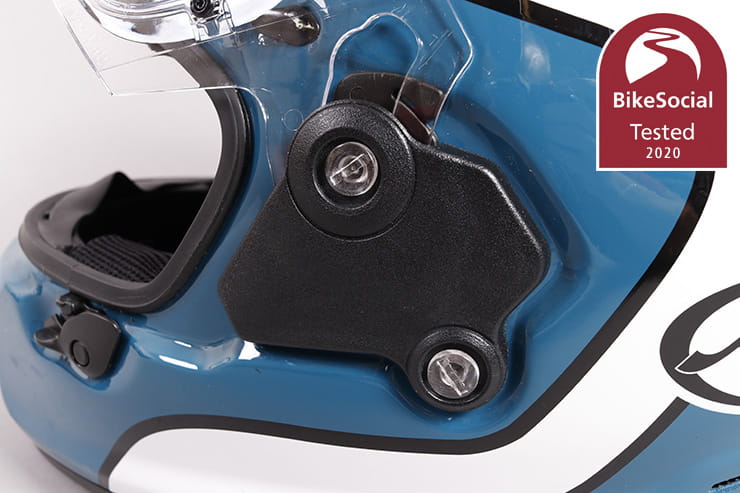 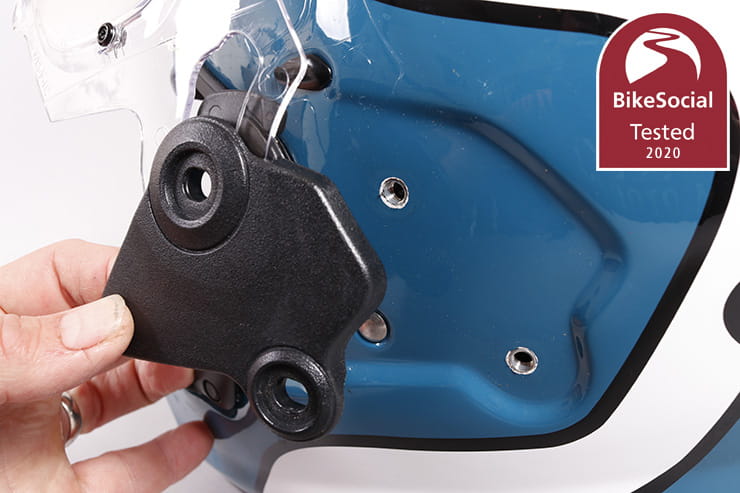 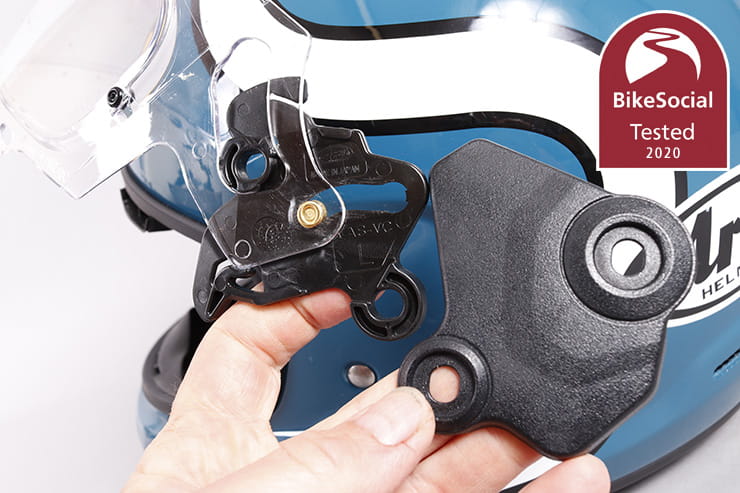 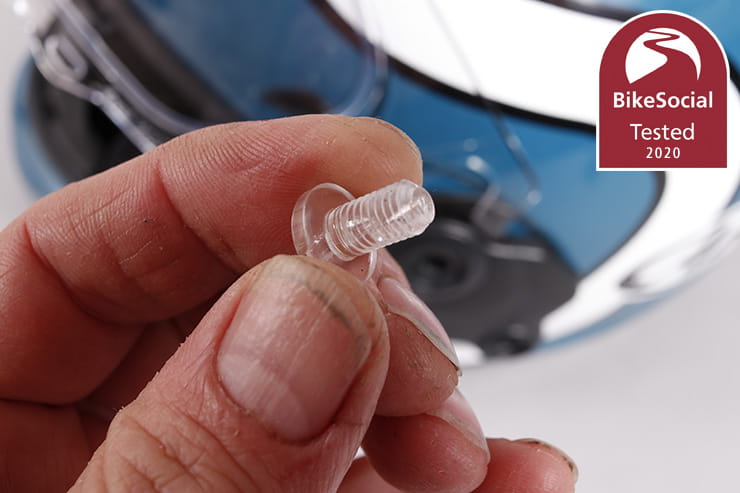 Like a flash-back to the days of old, the Arai Rapide uses screws to hold the visor on; not two but four, and you have to take them all out, then unclip the two halves of each visor holder to get it out. It’s what’s technically known as a ball-ache.

For general cleaning it’s not such a big deal – I tend to leave my visors on and drape some wet kitchen roll over them to soak the flies off. But I love wearing a dark visor on sunny days and with the Rapide it’s just too much hassle to swap them over.

Preventing water ingress at the top of the visor is down to the quality of the seal (excellent here), and the correct adjustment of the visor’s position on the shell, which is frustrating on the Rapide as the position is adjusted by loosening those same four screws you just took off to change or clean the visor. Getting it back in the right place is just a matter of closing the visor with the screws loose, then gently pushing it back tight against the seal when you nip them up. Not a great trauma, and this is a classic-style lid… perhaps modern luxuries have spoiled us. 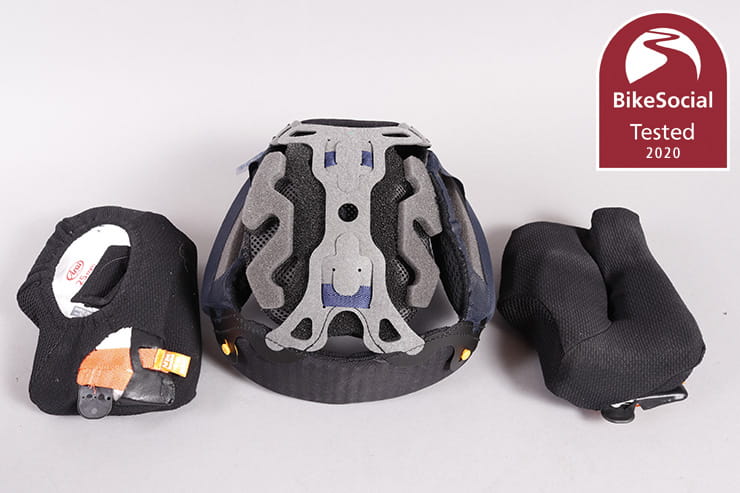 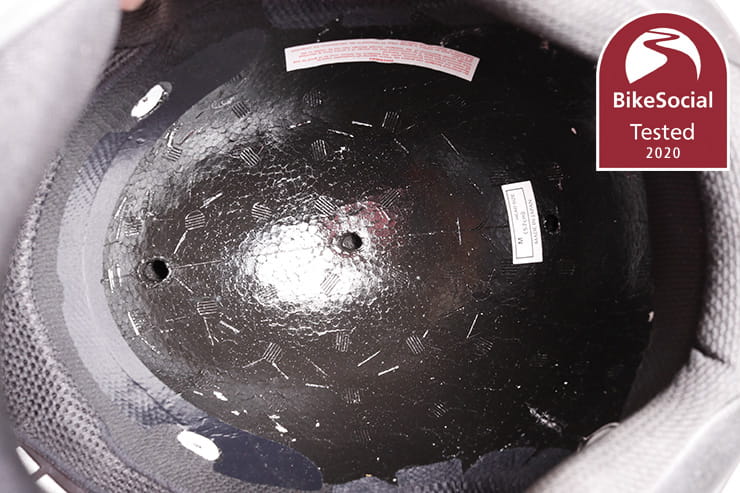 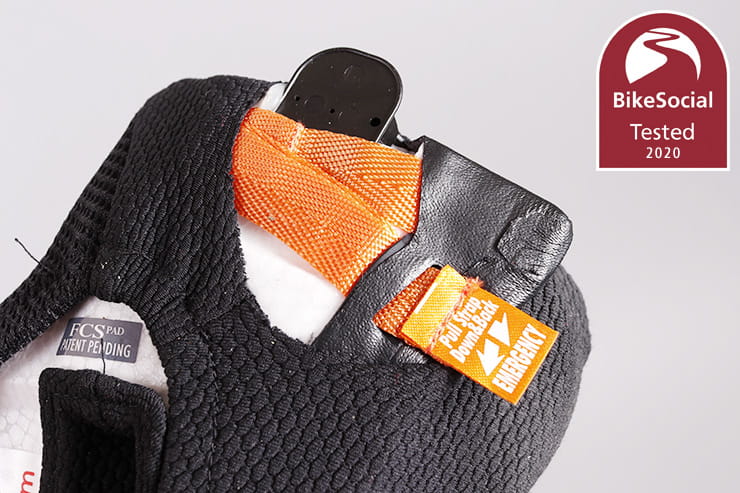 The cheek pads and skull cap are a lot easier to remove and replace than the visor, so washing them isn’t a problem. The chin and neck skirts, as well as the strap covers, aren’t removable, so when the helmet does get grubby you’ll need to wash these by hand with a shower-head or similar.

You’ll find the usual high-quality Arai construction here, and while the cheek pad material feels a fraction coarser than on some other Arais, it’s still a lovely place to be.

Those cheek pads also have quick-release tags fitted, which would allow an emergency responder to pop them out, making it much easier to remove the helmet without straining the neck in an emergency. 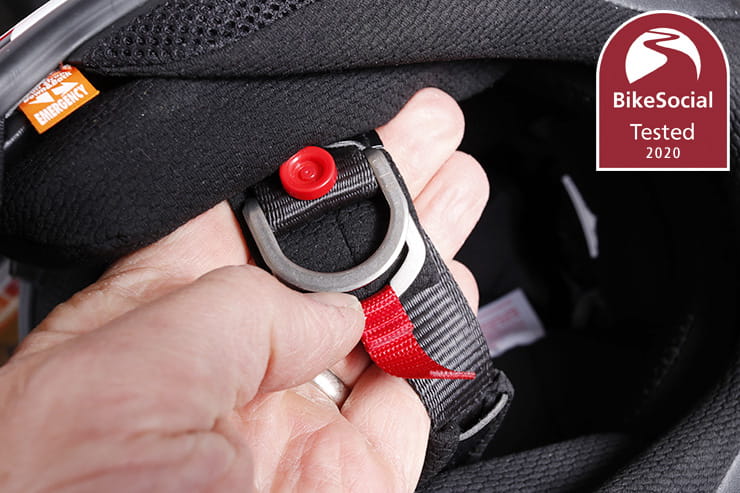 The fastener is a standard double-D ring, which gives a secure fit every time. While not as convenient and easy to use with gloves on as a micrometric ratchet, you’ll find these traditional fasteners on all Arais.

Always ensure you try any helmet on for yourself before buying; regardless of whether you think one brand works for you, designs – and our heads – do change. Check for a snug fit all over the lid, as well as for any pressure points that can go from barely noticeable to severely painful after an hour or so of riding. 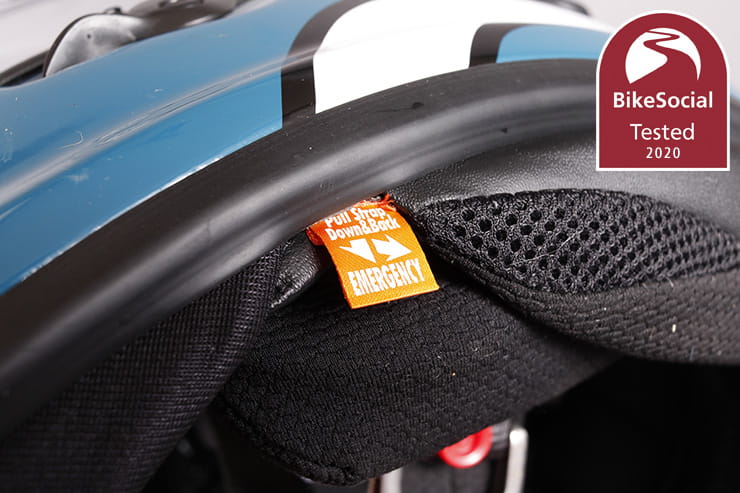 Thanks to its clean design and smooth shell, the Arai Rapide is surprisingly quiet. Not to the point that you can get away without wearing earplugs at anything above town-riding speeds but there’s no whistling or drumming, just a comfortable rush of air. Of course, remember that it’s the fairings and screens of bikes that tend to introduce the most noise, and this is a lid more likely to be worn on a naked machine.

It’s easy for people to rave about a helmet because they love the styling, but what matters is how well it fits and how it performs on the bike. I love the graphics and the squared-off chin-piece of the Arai Rapide, but it manages to give surprisingly effective ventilation while also feeling comfortable all day long.

What lets it down is the visor change, though if you’re not in the habit of swapping them around regularly, it’s much less of an issue. Overall, a great retro-style lid that gives you the modern confidence and build quality you’d expect of a premium brand.