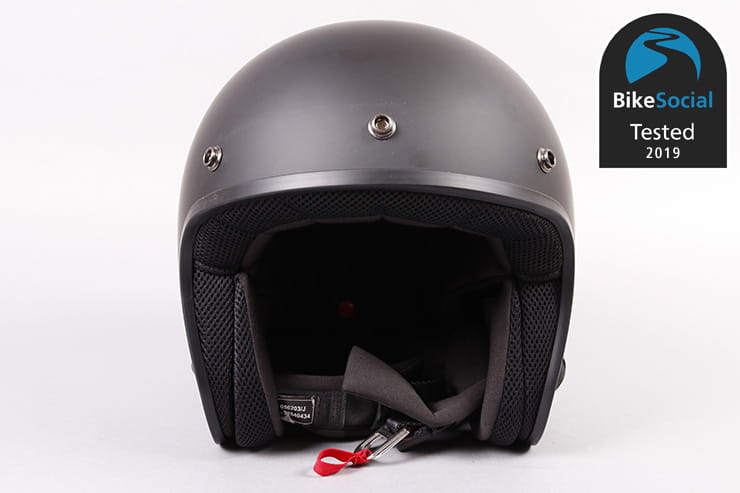 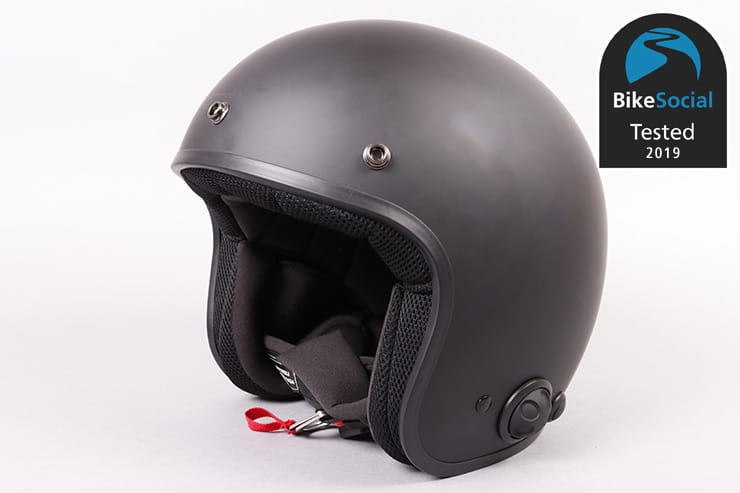 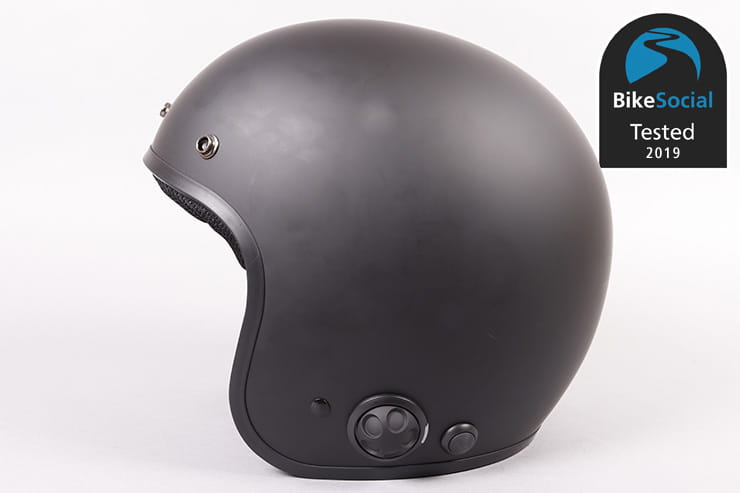 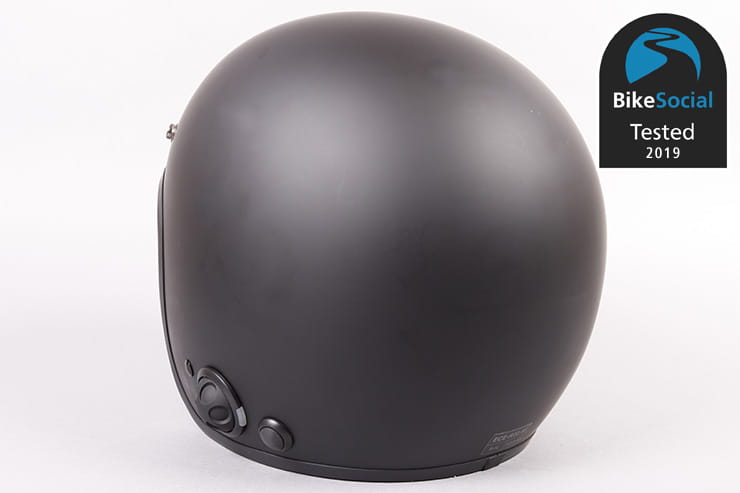 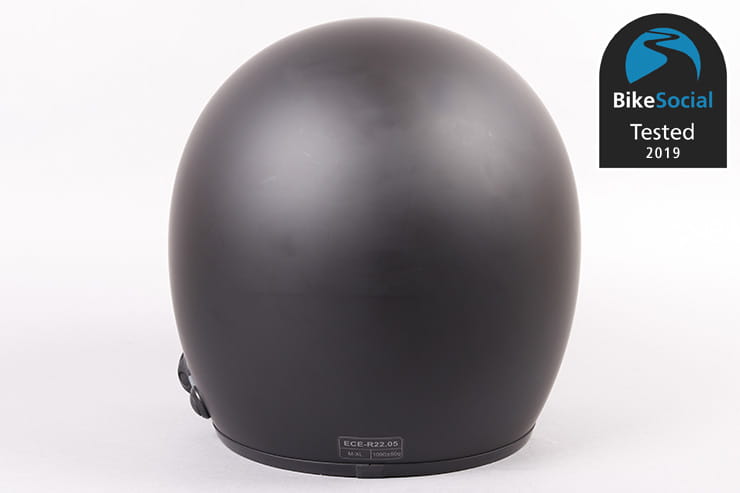 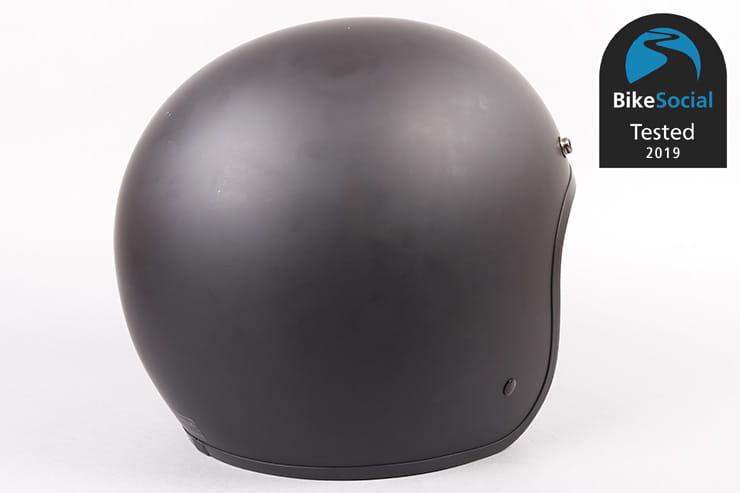 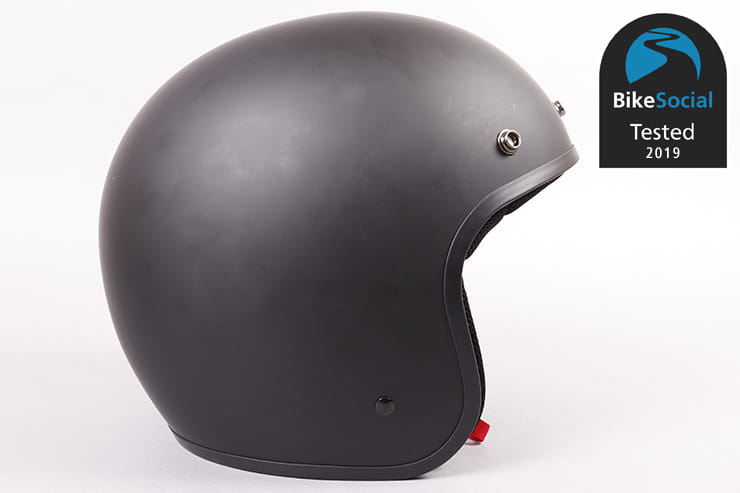 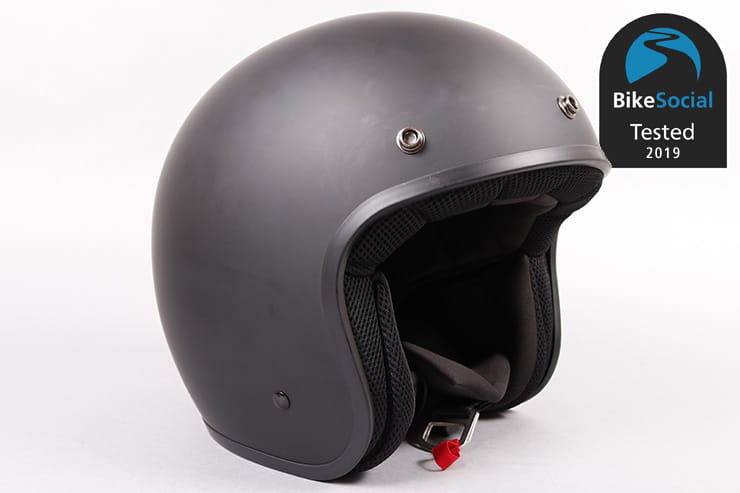 The Sena Savage on review here is an open-face helmet with a built-in Bluetooth intercom. I’ve been wearing it while riding several bikes, including the Kawasaki Vesys 1000 and Honda MSX125, but it’s best suited to custom, cruiser and street machines…

The Sena Savage uses a composite fibreglass shell that comes in two sizes across the XS to XXL range (so someone with a small head won’t be having to wear a massive shell that accommodates an XL).

While Sena does offer a gloss white and a matt black version, only the black is available in the UK and across Europe. It’s a very clean and simple design that looks great with or without the two supplied gloss-black plastic peaks (which have standard popper spacing, so could be replaced if you wanted).

I’d guess that some riders might want to use this helmet as a base for their own paint designs, and while no manufacturer will recommend modifying or painting a helmet, the fibreglass construction is a lot safer to paint than a plastic shell.

The shell is extremely slim – open-face lids can often look a bit Wallace and Gromit on me, but (with a Buff), this can look very good; it’s as pleasing a shape as the £299.99 Shoei J•O, which does have a built-in visor, but doesn’t rock its own intercom.

At 1,082g, the intercom kit is clearly not adding much weight to this medium-sized Sena – I weighed the Shoei J•O at just 1,000g (though its visor will be some of that). To be honest, I’ve yet to find any helmet that’s so heavy you can feel it in use, but the Sena is certainly light on the head. 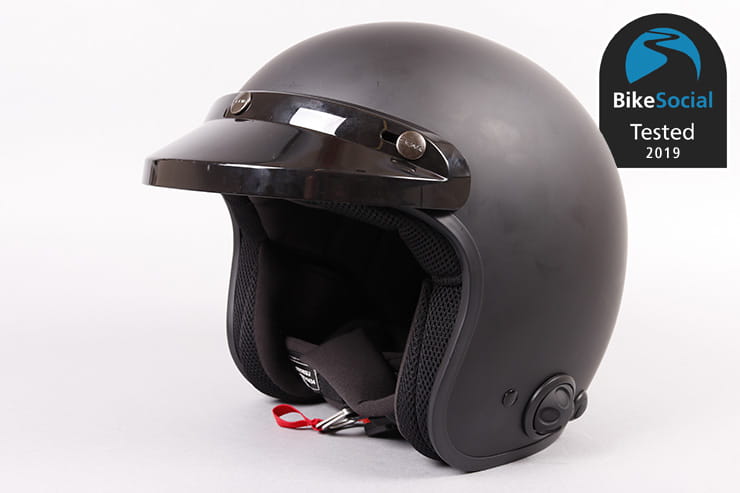 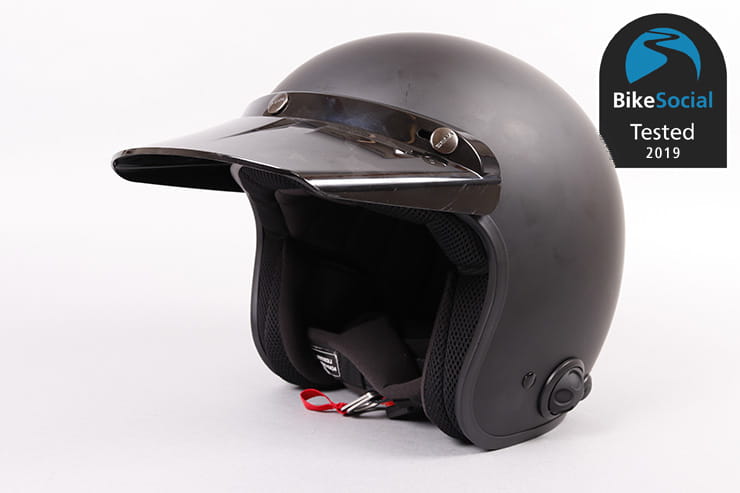 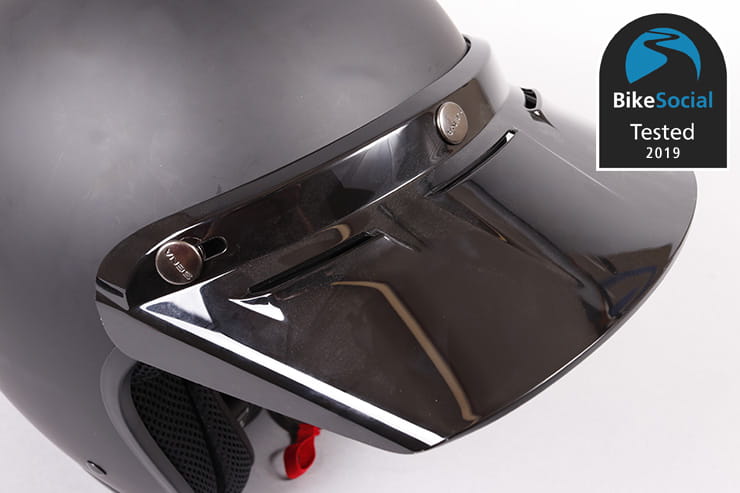 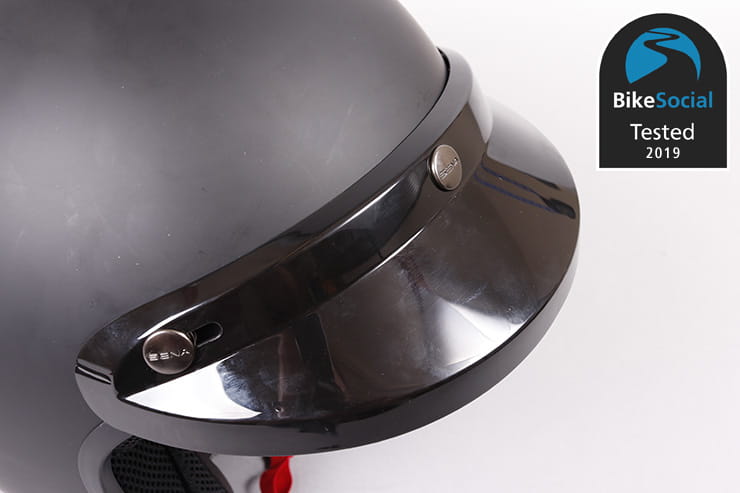 As is typical on an open-face lid, there are no vents built into the Savage’s shell; there’s no need when the entire front of your head is exposed to the elements.

It’s an open-face, so there’s no visor. The peaks (one short and one long) do help reduce glare, which is helpful in Autumn with the low sun, and while it’s worth noting that some lids (again, like the J•O) do come with a built-in visor, Sena is sticking with the classic style of an open face.

Of course, you’ll probably wear this with goggles, so it is a shame that there’s no tag on the back to retain the goggle strap. 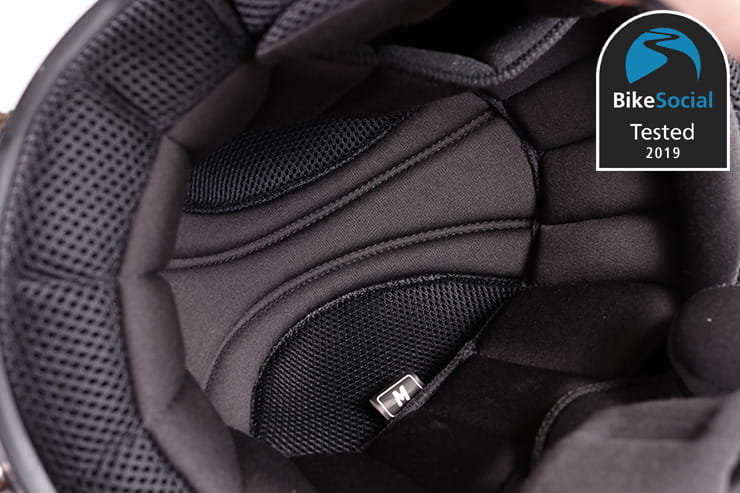 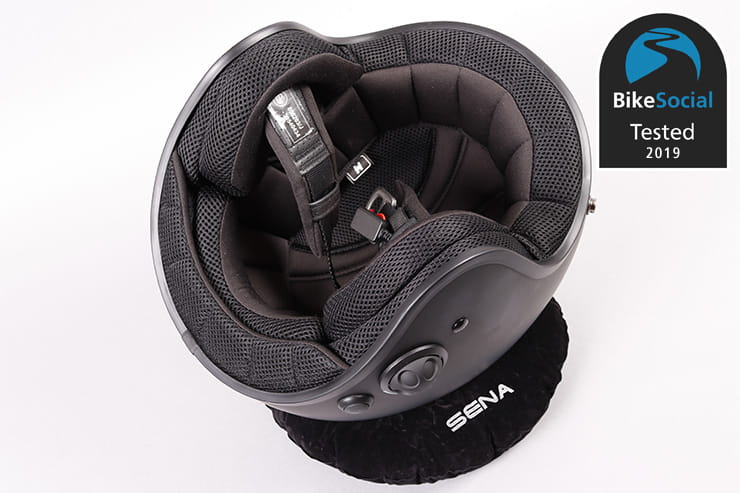 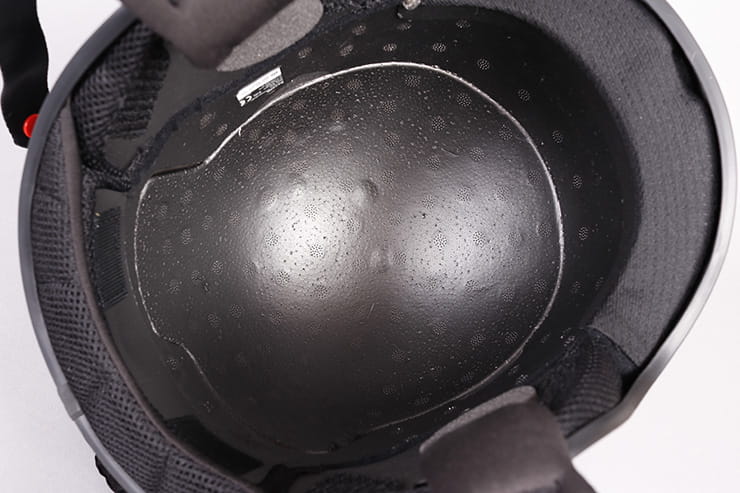 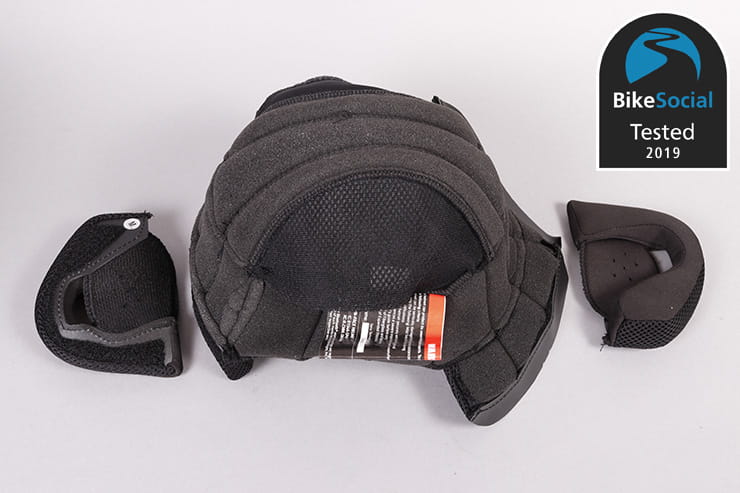 The lining is comfortable and fully-removable, which is particularly important in a helmet with integrated electronics; while they’re tucked well away from the rain, soaking this under a shower-head wouldn’t be a good idea. The cheek pads and the skull cap are all retained with simple hook-and-loop patches and are quick and easy to remove and refit. 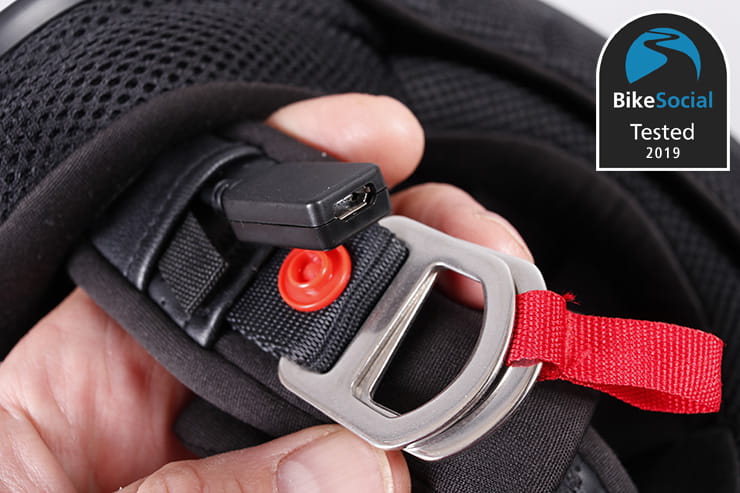 The fastener is a simple double-D ring – it’s not quite as smooth in use as some others (possibly due to sharper edges on the rings), but it’s really not a problem. A micrometric ratchet adjuster is quicker in use but wouldn’t have suited the classic style.

Running along one of the straps is the microUSB charging port, making it easy to get to. It’s not got any weather protection, so while I haven’t had any problems – and open face helmets aren’t the usual choice of all-weather commuters – it’s just worth being aware of, if only to make sure it’s dry before plugging the charger in.

Helmet fit is extremely subjective, so always try any lid on (or other biking gear) before you buy. I find the Savage to be very comfortable with no pressure points; If anything it’s perhaps slightly on the large side for me, but not to the extent that I’d consider going down to a small.

My glasses fit under the lining without any problems.

An open-face lid can be surprisingly quiet as it’s not got as much on it to cause buffeting. It’s also the buffeting from fairings and screens that are the biggest problem for noise in helmets, but this Sena would typically be worn on naked customs and cruisers where the only sound is the rushing of the wind.

The only point of note is that the peak has occasionally rattled, but pressing against it has always cured it; if it ever got to the stage that I couldn’t stop it I’d simply add some foam strip to the back of the peak to keep pressure against the helmet’s shell.

The built-in intercom connects quickly to your phone and sat-nav via Bluetooth 4.1, so you can listen to music or make and receive calls if you want, as well as hear directions.

Up to three speed dial numbers can be programmed into the Savage and accessed via the jog dial, though you’ll have to remember which is which as the device simply says “Speed dial one.” You should also be able to use voice commands in your phone to call a specific contact – I have it set up on my phone with Google Assistant.

The Savage supports intercom conversations with up to three other people – if you want to access more you’ll need to buy Sena’s +Mesh adaptor, but as a rider who typically only uses the intercom to talk to my pillion, the Savage is more than capable enough. 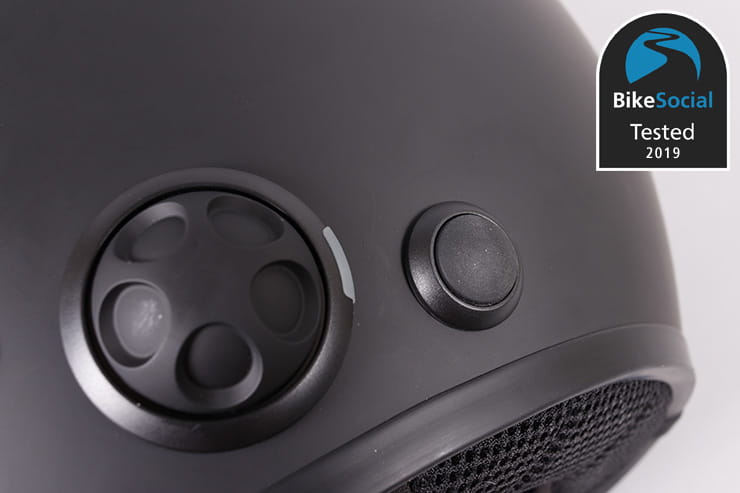 There are just two controls on the Sena Savage – a jog dial that rotates and acts as a push button, with a smaller push button behind it; spend some time with the printed quick-start guide and you’ll soon get to grips with it. There’s also a downloadable full user guide on the site, and either can also be accessed via the Sena Utility app on iPhone and Android.

The smartphone app is very easy to use and stable – you can easily access settings like radio presets and speed dials, or this can also be done with the Device Manager that’s available to download on Mac or PC. 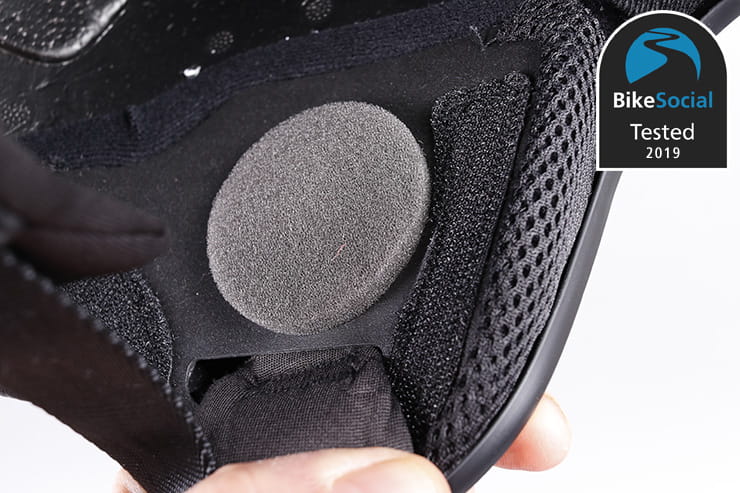 All Sena intercom systems are supplied with ‘audio boost’ disabled – turning it on can only be done with the Device Manager on your computer, or via the smartphone app – it’s worth doing as without it, full volume isn’t available. It’s also worth checking what volume your smartphone is outputting when connected to the helmet for music – I have my Samsung Galaxy S10 set up via Bixby Routines to automatically go to full volume when it connects to the Sena, so I can easily adjust my listening volume on the lid.

Overall sound quality is very good, considering you’ll typically be listening through earplugs; it’s certainly comparable to other intercom systems. Audiophiles might prefer in-ear audio, but I’m very happy with the sound quality of the Savage.

Where this open-face helmet can’t compete with the other systems I’ve used (in full-face lids) is the quality of speech when talking to a pillion, other riders or making a call. I tested it by phoning home and connecting an audio recorder to the phone line to get the best idea of the quality.

Riding the Kawasaki Versys 1000 (which of course has a screen), the clarity of speech from the microphone – which is hidden up in the brow of the lid – is acceptable up to about 40mph, but unsurprisingly not up to the clarity you’d expect from a full-face helmet. Beyond that it drops off significantly as the electronics try to cancel out the buffeting caused by the screen. However, if I stand up into clean air – the kind of wind blast you’d be more likely to get on a bike without a screen – the performance improves again, becoming pretty usable up to 70mph if you speak loudly. Of course, if your bike has a huge screen that leaves you sat in a bubble of still air, you’ll also find clarity much better; it’s the buffeting that’s a problem.

Performance would likely be improved with a boom microphone placed in front of the mouth but that would really spoil the look. If you want the very best communication performance, you’ll likely be wearing a full-face or flip-front lid. But for those after an open-face, I think Sena has made the right compromises in hiding the mic and by assuming most owners won’t be sat behind a screen.

While range will be affected by the environment and weather, the Savage performed very well – using the same test I carry out for all intercoms, with a clear line of site over flat ground it achieved 995km before starting to break up. Out to 1.35km the Savage hung onto the connection but it got a bit noisy; usually intercoms will just shut down, then reconnect when the signal is stronger again. Of course, I could have tapped the intercom button to break the connection had the noise become too annoying.

In a busy town environment it achieved 390m, again trying to hang on to the signal as the distance increased. Both of these tests indicate that the Savage was among the best I’ve tried when it came to range, and in a built-up housing estate it cut off at the same point as others – 100m after turning a corner and a house blocked the signal. Here it also tried to hold the signal, resulting in a lot of noise, so the Savage does seem a bit reluctant to admit it can’t maintain a connection. Again, tapping the button will break that connection manually, but it does mean it won’t be re-established automatically when back in range; you’ll have to tap to start talking again.

Like every other intercom, the built-in FM radio isn’t something you should buy the device for. It’s easy to use, and if you’re not riding far it’s fine, but stray more than about 10-15 miles from where you had a good reception and things usually fall apart. Even with the RDS option turned on to retune to a stronger station, the results are disappointing.

Through Cardo, Interphone and Sena, I’ve yet to use a system that has a useful radio for long-distance. 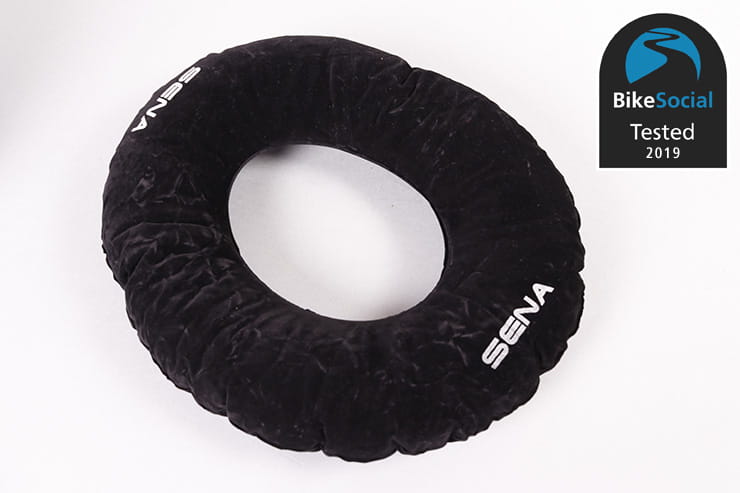 The Savage has a 650mAh battery built in – like other intercoms, you can’t replace it, but I’d expect it to last the safe life of the helmet (five to seven years).

Using my usual test of streaming music at full volume, the Savage ran for a very impressive 11 hours 45 minutes, and charging is easy with the microUSB cable; it takes about three hours from flat.

There’s even an inflatable donut supplied that you can rest the helmet in upside down while it’s on charge, even though you can easily get to the charging port when it’s stood upright.

It’s a shame you can’t update the Sena via your smartphone, but like many current electronic devices, you’ll need to plug it into a computer. Fortunately the PC or Mac Device Manager software is easy to install on your computer and guides you through the process. There’s only been one update necessary in the several months I’ve been using the helmet, and that was to introduce iOS13 compatibility.

I’ve repeatedly compared this helmet to the Shoei J•O because they’re very similar prices. While the Sena isn’t as plush inside as the Shoei, and it doesn’t have a built-in visor, it’s still a very nicely made lid, and the fact that it has a very good built-in Bluetooth intercom means it really does offer great value for money, especially when you consider that an equivalent stand-alone comms system from Sena costs at least £190.

It’d be great to see more colour options, and while this intercom can’t give the performance of a full-face system, its comms are okay for those on an unfaired bike, and it’s great for those who generally want the kit in order to enjoy music on a ride.

The shape means this is one of the few open-face helmets I want to wear, and the neat incorporation of an intercom makes it a great option at a really good price.