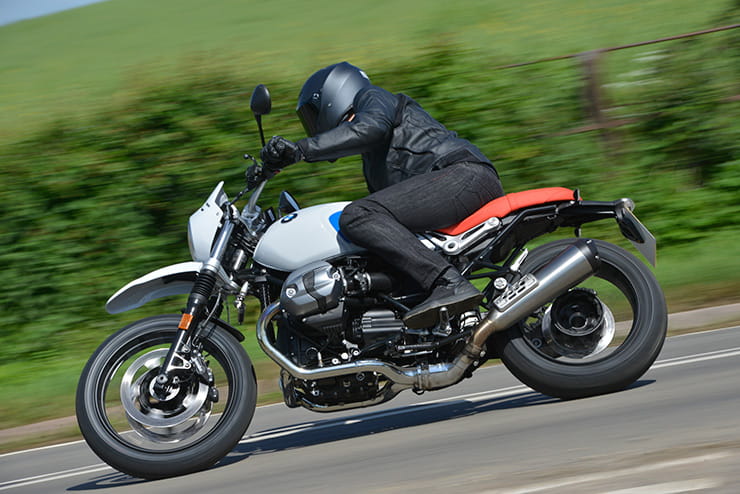 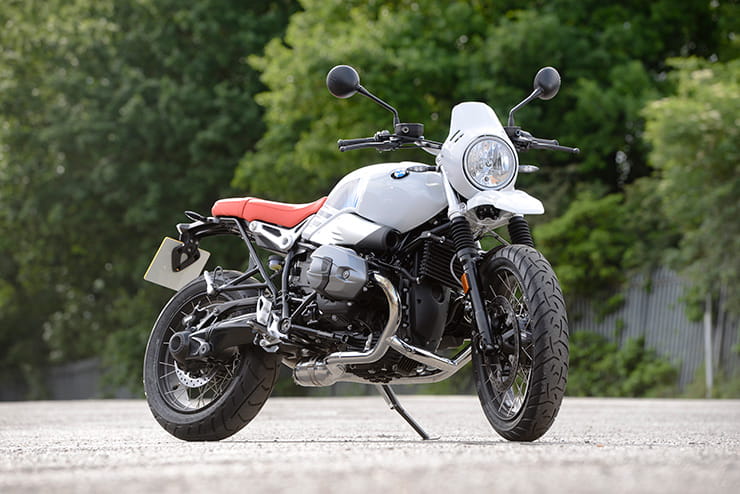 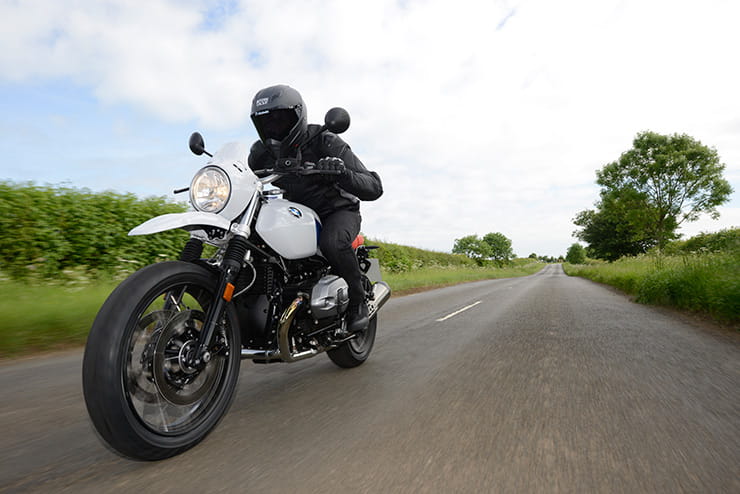 At the beginning of the 80s, KC and the Sunshine Band topped the charts with ‘Please Don’t Go’ while ‘The Empire Strikes Back’ was getting bums on seats in movie theatres across the land. A young Northern Irishman named Joey Dunlop emerged as one of the greats while Kenny Roberts took the 500cc World Championship, Vauxhall launched the Astra and Alton Towers opened.

It was also the year BMW released the grandfather of the almighty R1200 GS, called the R80 G/S, yes it even had a backslash in its title. This was the bike that generated what has become one of the most important and popular categories of motorcycles. GS or G/S stands for the German ‘Gelände/Straße’ or ‘Off road/Road’ by the way, and that is semi-relevant to this new model. More on that later.

Paying homage to the R80 G/S in the Bavarian manufacturer’s 2017 model line-up is the R nineT’s fifth version in the heritage range; the Urban G/S, a classic enduro machine fitted with the same 1170cc, air/oil-cooled, Boxer Twin engine as seen in the four other models. The range was launched back in 2013 with the standard yet rather trick in terms of its components, R nineT. Such was its popularity, BMW have continued to milk the cow by bringing us the Scrambler (and Scrambler X), Pure (and Pure C), Racer (and Racer S) and now Urban G/S (and Urban G/S X). 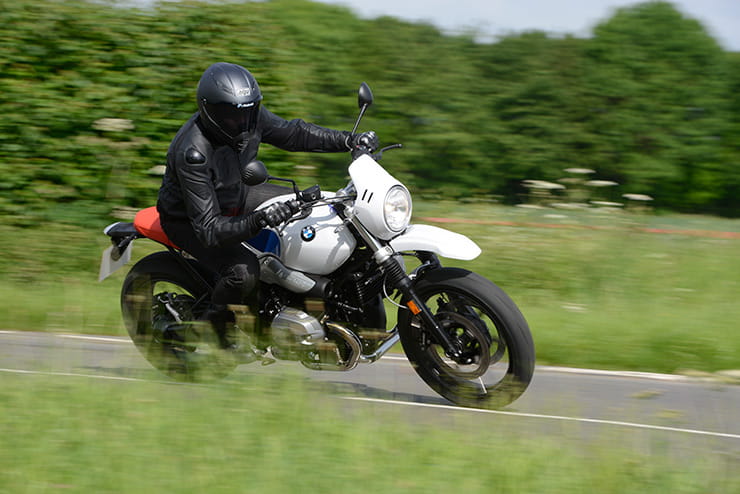 The Urban G/S was one of three new GS models in BMW’s 2017 range unveiled back in November 2016 at the annual EICMA show in Milan, alongside the G310 GS and the latest edition of the uber popular, and now Euro-4 friendly, R1200 GS.

In its standard form, the Urban G/S comes in at £10,550 but for an extra £635, giving it a price of £11,185, the ‘X’ model gets spoke wheels, heated grips, a chrome exhaust cover and LED indicators plus the option of the far better looking off-road orientated tyres; Continental’s TKC80 instead of Metzeler Tourance Next.

So, if you're into 80s styling with 80s simplicity then this is the bike for you. Nostalgic and retro are words one might use to describe its look and it’s certainly fair to assess the BMW Motorsport colours of yesteryear with the lightwhite non-metallic combined with fuel tank decor in two blue tones with a bright red, flat, bench-like seat as a nod to its predecessor.

The 80s theme continues with the straight forward controls and lack of electronic interference, in fact I thought how pleasant it was not to worry about riding modes and how much engine braking I would prefer or which of the 8 traction control settings I might want or weather I fancied the rev counter on the left, right or underneath the speedo. Nope, none of these options are available and for a while it felt refreshing. ABS is fitted as standard while Traction Control is a £310 option. Even the rocker switch on the left handlebar marked ‘Info’ and ‘Trip’ confused itself. ‘Trip’ actually offered the ‘Info’ while ‘Info’ offered nothing…until the gearbox was in neutral. Oh well, all I had to play with was the three-stage heated grip button but that was redundant given the 22-degree air temperature on this, the final day of May. All I had to do was concentrate on the riding bit. 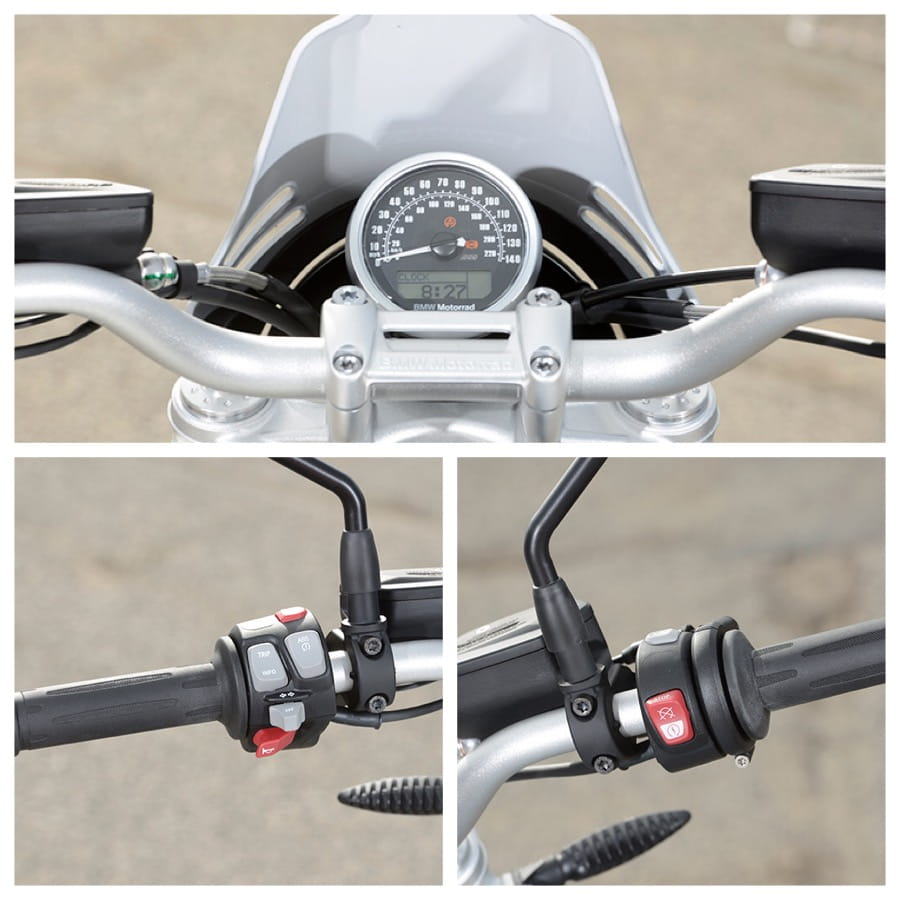 The air-cooled boxer engine is the dominant part of the Urban G/S. Yes, it looks good, but so do loads of retro bikes, what sets the BMW aside is the feel and character of the engine – and that’s why the R nineT range has been such a sales success. Get on the gas and the twin cylinders thump you forward while both sounding and feeling authentic and raw. On paper the 110bhp doesn’t sound that impressive, it’s not going to be chasing many sports bikes but it is the 85.6 ft-lb of torque that matters and that’s the lovely boxer punch fans of this engine long for.

True, without the GS’s various gizmos it can feel a little unrefined, but that suits the Urban G/S’s stripped back feel and attitude.

Its torque lies in wait, like a kitten ready to pounce on the wiggling toe or even Iannone heading towards Dovizioso at the final corner of Argentina's MotoGP last year. But it’s far more controlled than those examples, and there’s oodles of it too driving you along through each of its tall gears. It hits you in waves at 4000 and 5000 rpm, pulling and pulling to its peak at 6000rpm – in fact it has the same torque figures as the Fireblade SP I’d ridden to the press launch based at the Sywell Aerodrome in Northamptonshire. Though the Honda hits its peak at 11,000rpm and packs around 189bhp.

It sounds mega too. The delicious, classic, throaty crackle from the first blip of the throttle at the bottom of the rev range is barky and exciting, it quietens off and then the noise comes again as the grip angle increases. Its 2-into-1 stainless steel exhaust system looks the business and definitely makes the right noise. 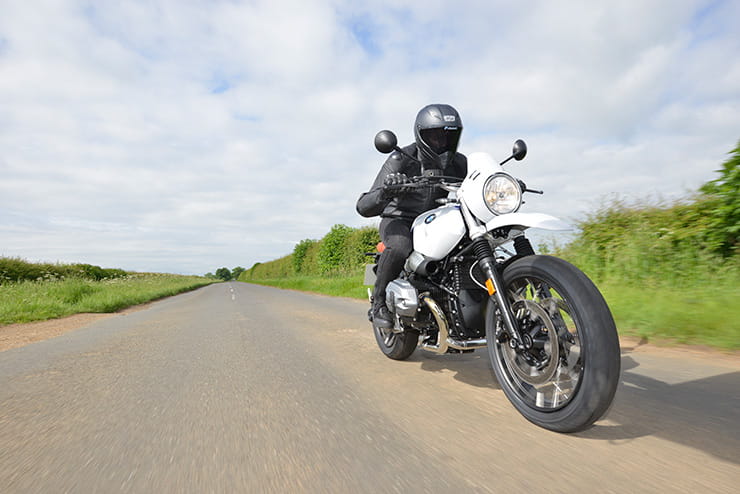 Top speed is claimed to be north of 120mph and I expect that given the chance the BMW would get to three figures pretty quickly too dropping its power off the line impressively. Then when it comes to stopping, the lightest lever squeeze of the Brembo-assisted 320mm brakes do a fine job with no ABS interruption while helped by the engine braking of this shaft-driven motorcycle.

The basic single clock offers an analogue speedo and a basic digital display but neither a rev counter nor a gear indicator. The numbers were tricky to read with the vibrations of the Boxer twin throbbing beneath but pah, whatever, there’s a slightly romantic side to riding as riding was supposed to be 37 years ago.

I found the high, wide bars and upright seating position comfortable enough for our test ride of only 60 miles, I even noted how good the flat, twin seat was despite its appearance. With the lack of wind protection, you’d have to be a more committed man than I to rack up any motorway miles but that’s not the Urban G/S’s forte. With hands positioned out wide, a semi-crouched position engaged and 110bhp firing the BMW along via the R nineT models’ synonymous shaft-drive, I found the bike easier to handle than I expected. ‘221kg wet weight’ reads the spec sheet and for a naked enduro-style bike, that’s plenty. It takes a little time to trust the chassis and tyre combo to carry the kind of corner speed an enduro-style bike could only dream of but give the Urban G/S a chance and it’ll do more than the job you hoped for.

The weight thing can easily be overlooked when you start nosing around at the build quality. Being a BMW you know that everything has been put together with precision and there’s certainly a feel-good factor when riding a solid and robust yet charming bike all at the same time. The back roads are its home, it’s where it thrives. Urban? Yes, ok it won’t look out of place doing a city commute, especially with the 850mm seat height enabling a bit of peering over cars in traffic jams but this is no true G/S, despite its family tree, it may have the right components to appear as though it can handle more than just a dry farm track with its dual-section front mudguard, telescopic forks and 19” front wheel but listen to my advice and stick to the tarmac. It’s certainly more Urban than G/S. 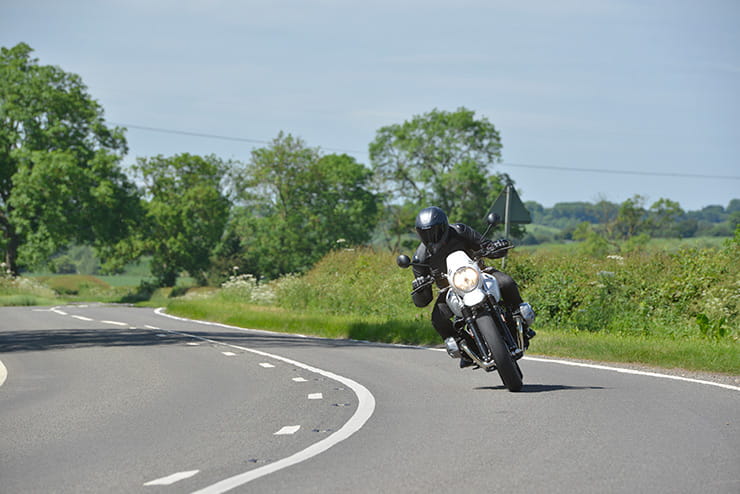 The B-roads used on the test offered a handy combination of blind corners opening into straights and fast bends too each encouraging a fistful of throttle. I doubt BMW’s designers had ‘Performance’ written in big letters on their notebooks during their product development meetings but the Urban G/S doesn’t hang about. The pace is good for a back-road hustle and despite the clunky nature of the gearbox it still pounds through the tall gears, never missing a beat and requiring only the slightest touch of the springy clutch lever…if you wish to offer a degree of mechanical sympathy. A minor throttle roll-off and no clutch will suffice.

Any gripes? Well, only a handful of minor ones really; the rear suspension is slightly firm but can be easily fixed either by the rider eating several more pies or investing in a lighter spring perhaps. I wouldn’t fancy riding the Urban G/S any great motorway distance and I doubt the styling or price tag would be to everyone’s tastes either. I’m clutching at straws because really the Urban G/S is hearty, solid, easy-to-ride, cracking, gown-up bike with a stack of torque, a glorious mid-range and it makes you feel good and has plenty of character to boot.

Did I care about the less-than-smooth nature of the gearbox? Nope, it’s all part of the experience. Was I worried about the vibrations? Not at all, they aren’t intrusive enough. Did I miss rider modes? Not with this style of bike. Did I miss a rev counter? To be honest no, although I did find myself looking for a gear indicator. Did I miss a decent screen? Well, that depends on what you are looking for in your bike.

37 years on after the R80 G/S made its debut and the old school charm remains in the Urban G/S. It's definitely a feel-good bike. 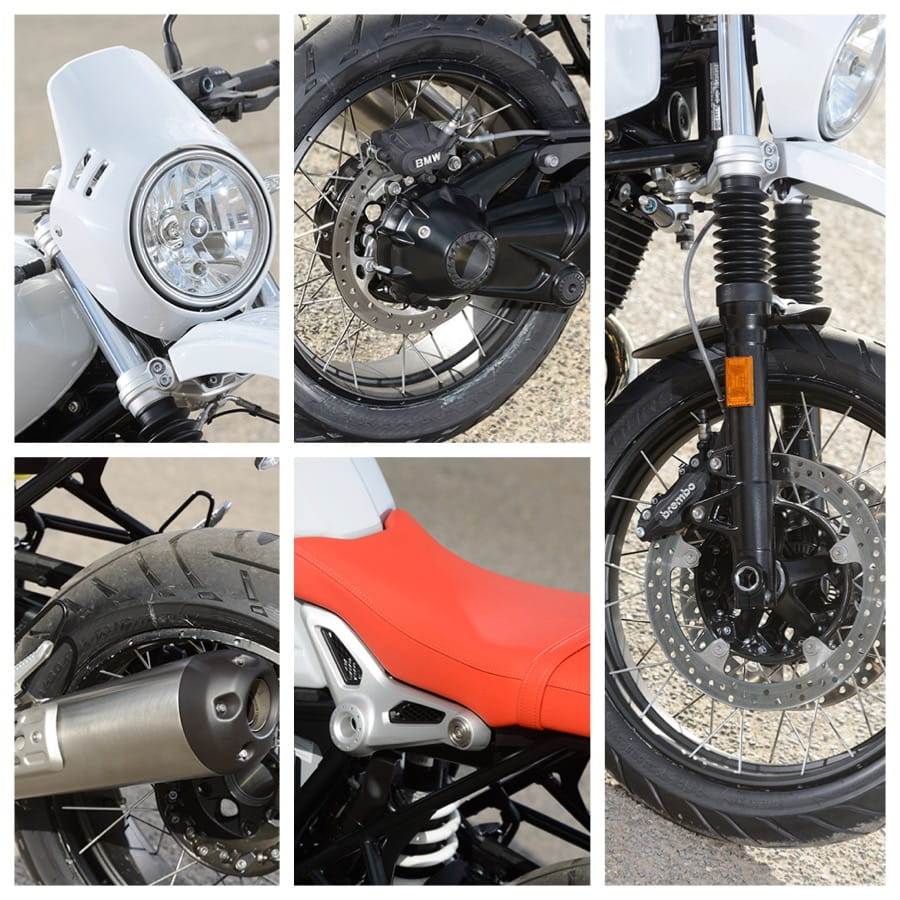 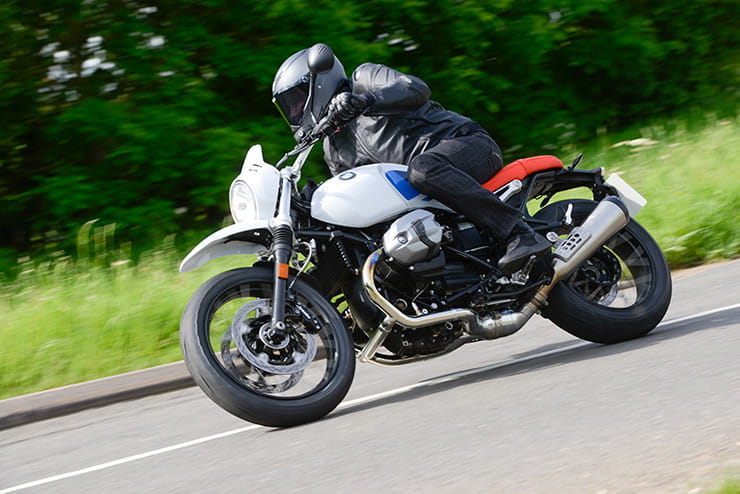