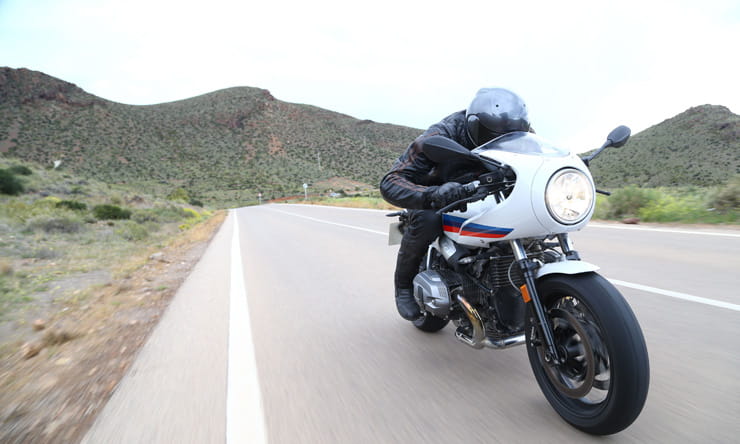 The only surprise about BMW launching a café racer powered by an aircooled boxer motor is that such a switched-on manufacturer has taken so long to do it.

After all, old boxers have been a mainstay of the café racer cult in recent years, with firms including Devon-based Kevil’s Speed Shop, Fuel of Barcelona, Blitz from Paris, Berlin’s Urban Moto and Ritmo Sereno of Tokyo building classy flat-twin customs, many of them with clip-on bars, racy single seats and plenty of sporting attitude.

BMW even joined in themselves, you’ll recall, with the stunning Concept Ninety that Roland Sands helped create in 2013. Inspired by the R90S that was one of the world’s best superbikes of the early Seventies, the gorgeous orange-painted prototype looked sure to reach production.

Well it has taken four more years, and the orange paint has been replaced by BMW’s Motorsport white, but that café-racer concept has finally reached the streets in the shapely form of the R nineT Racer. And as the launch route in southern Spain flattens out, the road opens up and I crouch behind the low screen with the throttle wound open and the speedo needle approaching the 100mph mark, this latest member of BMW’s Heritage division is making plenty of sense.

The Racer’s 1170cc, aircooled boxer motor is punching it through the air with enough force to get my attention, and with a slightly old-school character and flat exhaust drone that are adding to the experience. The bike is feeling respectably taut and stable, too; and its fairing and the stretched-out riding position dictated by low clip-on bars are combining to make rapid riding as effortless as it is fun. 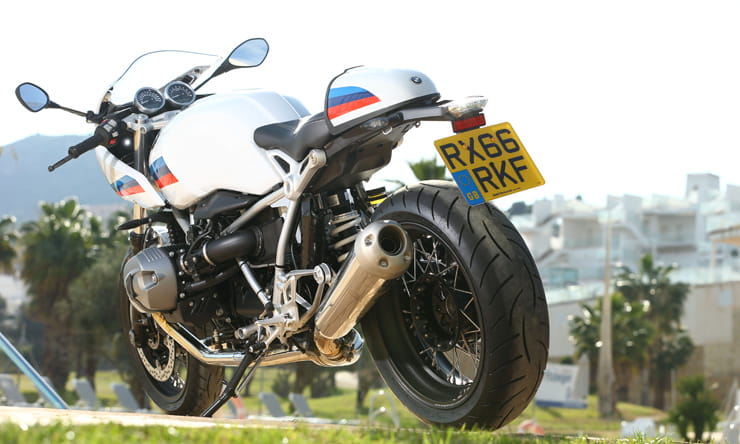 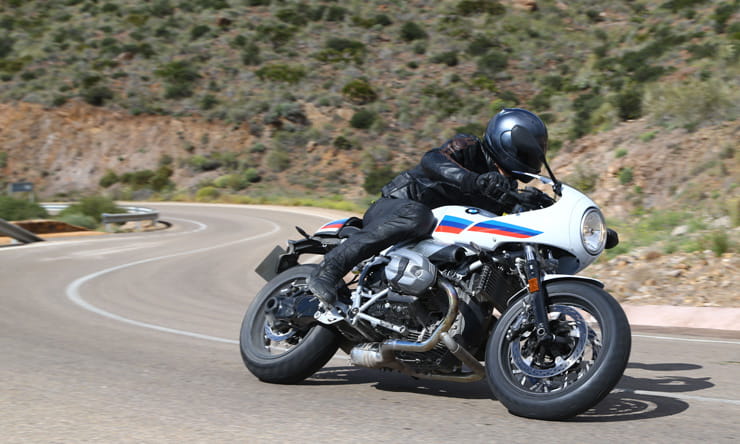 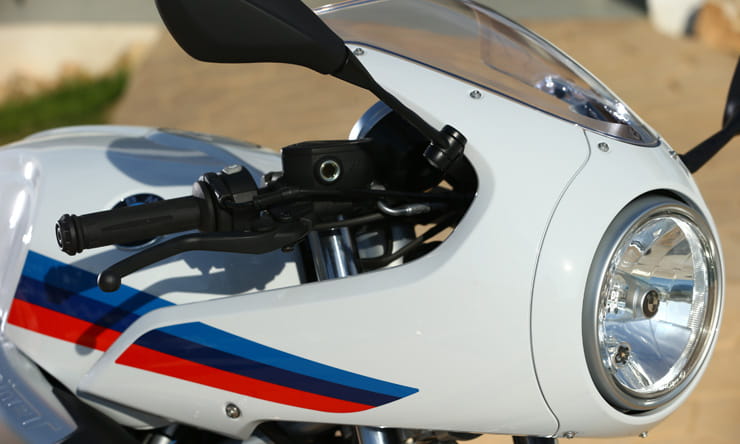 The Racer and the naked Pure that is introduced alongside it are the third wave of BMW’s retro-themed line-up, based on the 110bhp, dohc motor that previously powered models including the R1200GS. Like last year’s Scrambler, they’re directly descended from the classy, naked R nineT that has been a big success following its launch in 2014.

While the Pure keeps things simple and the Scrambler has an off-road image with longer-travel suspension, the Racer heads in the opposite direction with its half-fairing, clip-on bars, single seat and sporty vibe.

It does so very convincingly. That old air/oilcooled boxer motor manages to look perfectly at home in a café-racer, especially one as sleekly sculpted as the Racer with its fairing lowers running neatly into the shapely petrol tank, and its trim tailpiece’s seat-hump in matching white with red and two-tone blue flashes. 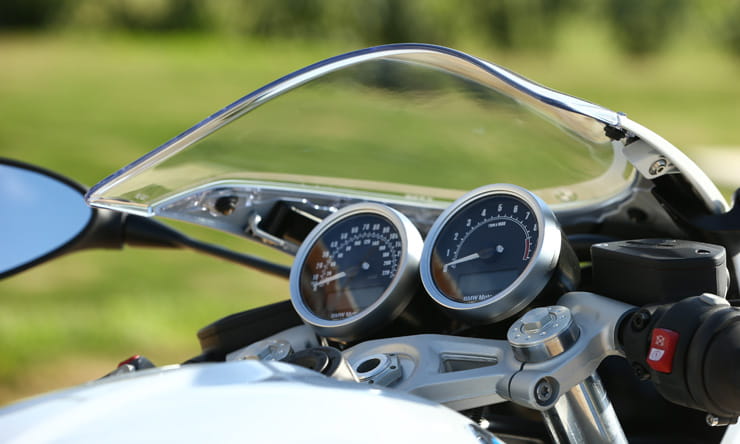 The trellis frame fits the look too. Like the Scrambler and Pure frames it comprises tubular steel sections at front and rear. But while those bikes add a bolt-on rear subframe that holds a dual-seat, the Racer is single-seat as standard so makes do without the subframe, which can be added as an accessory.

In BMW tradition there are two models. The Racer S replaces the standard Racer’s cast 17-inch wheels with wire-spokers, and also adds heated grips, chromed exhaust and LED indicators. The wire spokes add to the period image, and the heated grips are sure to be useful because the frame-mounted fairing gives hands no protection.

What the fairing does, in conjunction with narrow handlebars that bolt directly into each side of the forged aluminium top yoke, is dramatically change the riding position and the whole feel of the bike. Instead of sitting upright, you lean forward across the long petrol tank, with feet on pegs that are no higher but a bit further back.

This has a considerable effect on the handling. The Racer shares the Pure’s suspension spec, with non-adjustable 43mm forks and a rear shock that can be fine-tuned for preload and rebound damping. It has very slightly sportier steering geometry, and at 220kg with a full tank it’s only a kilo heavier despite the fairing’s extra weight.

But much more of that mass is over the front wheel, and the narrow clip-ons give less leverage than the higher, wider one-piece handlebars of the other R nineT models. All of which meant that the Racer was much less agile, feeling almost unwieldy at slow speeds. At least its seat is fairly slim and low, which aided manoeuvrability through villages on the launch route near Almeria.

Perhaps it’s confirmation of the BMW’s café racer status that the faster I rode, the better the bike felt. It was reasonably happy being cranked through tight second-gear bends in the hills, but required fairly firm pressure on the clip-ons to get it to change direction. And although its respectably well-damped suspension was also sufficiently compliant to cope with bumps, the leant-forward riding position didn’t take long to generate a slight café racer wrist-ache.

Thankfully that was much less noticeable on the faster, more open coast road, where the fairing diverted some of the wind from my chest, but allowed enough breeze past to take some of my weight off the clip-ons. The bike’s natural gait seemed to be with about 90mph showing on the alloy rimmed speedo. At that point the Racer felt relaxed and smooth, and had maybe 40mph in hand if I tucked behind the bubble and gave the throttle a tweak.

There’s certainly enough power for some excitement in a straight line. And although the engine lacks the refinement of the modern liquid-cooled boxer, it revved sufficiently smoothly to encourage me to keep the tacho needle jabbing at the 8500rpm redline, via plenty of use of the efficient six-speed box.

The BMW stopped reasonably hard, too, though its conventional four-piston Brembo calipers required a firmer squeeze than the original R nineT’s more powerful radial Monoblocs. Not that I had a chance to brake hard for long, because much of the ride was spent on wet roads where I was more glad of the Roadtec Z8 tyres’ impressive wet-weather grip, and also the BMW’s ASC traction control, a £310 option.

There are also many accessories because, in R nineT family tradition, the Racer is designed to form the basis for easy customisation, with parts ranging from brushed aluminium petrol tank and adjustable rearsets to pillion seat and saddle-bags. Even in standard form it could be quite practical on a longish, mostly main-road ride, when the reasonably economical boxer engine’s typical 45mpg would allow a fairly generous range of about 150 miles.

Even so, for riders who value versatility there are plenty of more suitable boxers, both aircooled and modern. The Racer has been created to go quite fast and look very cool, and succeeds on both counts. If that’s what you want from a BMW flat-twin, just be thankful that it’s here at last.

The Racer is neatly detailed and has enough performance to be exciting as well as bursting with character. At £10,775 for the standard model and £11,360 for the S it’s decent value too. (The Racer S is better value if you want its wire wheels and hot grips, in which case its other included extras cost just £15.)

Either way, the Racer is one of those rare bikes that would be as perfectly at home outside the Bike Shed as it would parked at the Silverstone MotoGP. Despite rather heavy steering it would provide plenty of entertainment on the rides to either venue, too.

Perhaps the only drawback with BMW’s singleminded Racer is that some nostalgic riders will be seduced by its name, looks and riding position, even though – as with Ducati’s SportClassic V-twins a decade ago – their riding styles and stamina levels are better suited to something less aggressive. 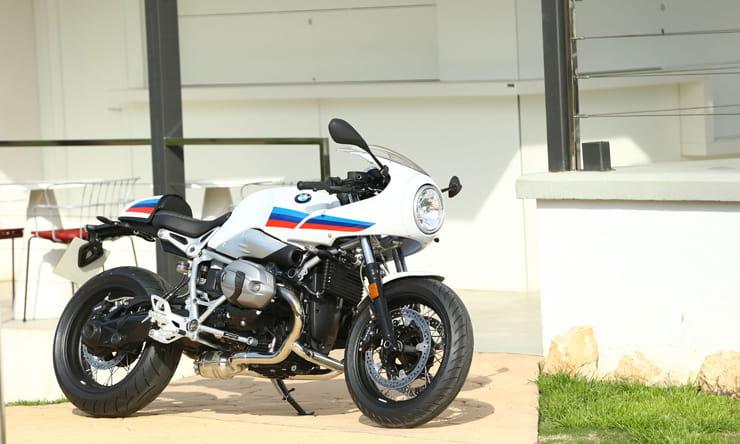