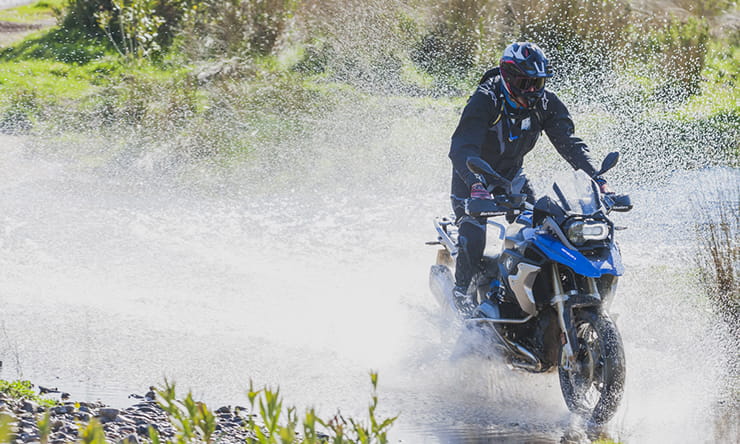 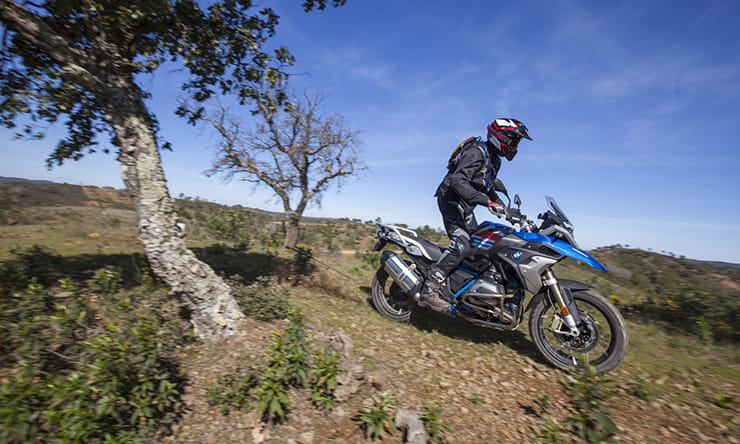 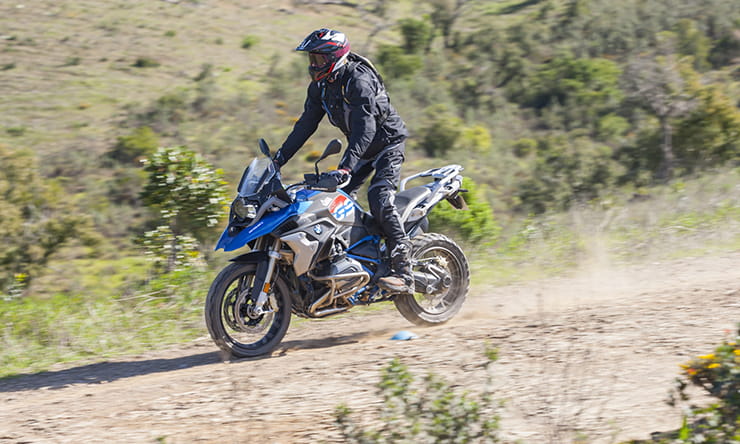 When an R1200GS Adventure is just that bit too tall, and a standard R1200GS just won’t quite cut it off-road, try the new R1200GS Rallye. It’s the most off-road focussed GS yet, looks mesmerising in its BMW Motorsport/Dakar Rally-inspired blue frame and blue/grey and red paintwork, but tackles road riding as well as any GS before it.

“Watch the first few roundabouts in town, a million tourists every year here mean they’re slippery as ice, we’ve all had a moment.”

When a man like Dakar finisher and leader of the BMW Off Road Skills courses, Simon Pavey, tells you that, you take notice.

He’s here in Portugal to guide us around the hundreds of miles or trails near Vilamoura in Portugal, and prove this new GS Rallye is way more than just a fancy paint job it may first appear to be.

Pavey runs 5-day off-road riding courses and riding holidays in the Algarve every year, and we were invited to get a taste of what the holidays are like with a one day experience, combined with the UK journalist press launch of the new R1200GS Rallye.

It’s certainly a great-looking bike, and has had tons of interest at shows so far, with bikes just landing in UK dealers.

Using the 125bhp liquid-cooled R1200GS as its base is a great place to start. It has consistently been Britain’s biggest-selling motorcycle above 500cc for more than a decade. But the R1200GS Rallye is all about sharpening the already legendary R1200GS and making it into an even better off-road bike. It’s an absolute belting motorcycle.  A bike that you can happily cruise along at 70-80mph on Portuguese roads that appear to have been dropped from heaven, and then just turn left up a set of gnarly trails and pretend you are a Dakar riding God.

Don’t believe me? We bumped into Husqvarna factory Dakar rider Ruben Faria out with his mate for a training ride on a full-factory Husqvarna 450 rally bike, at the end of one of the trails we were riding. Seriously.

The R1200GS Rallye isn’t a factory rally bike, but at 250kg fuelled, it never feels its weight off-road. The weight of the Euro-4 friendly Boxer twin is carried low down, and it’s surprisingly easy to manage at low speed in the dirt. Some of the shorter riders in our group also used a low suspension bike with an 800/820mm seat height and had no problem manoeuvring during some of the exercises Pavey and his brilliant team had us doing.

Emergency braking on gravel from 40mph with the ABS turned off needs the faith of someone like Pavey to show you how to do it first. 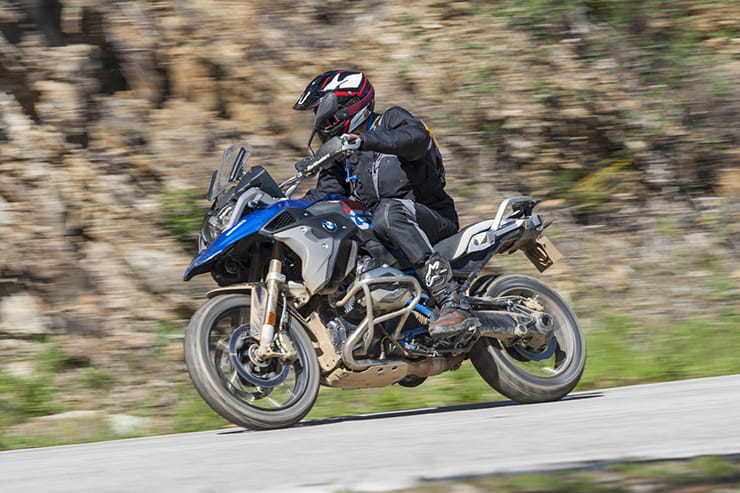 But most of all, we’re here to ride, and that’s what the R1200GS Rallye is built for. Anywhere and everywhere. It’s designed to take the GS even further.

It feels just at home doing both on or off-road, even on the optional off-road tyres.

We rode on Metzeler Karoo 3s, but Michelins are also available depending on supply when bikes are ordered. Or, you can spec the bike with road tyres when you order it. But after riding on the Metzelers for 120 miles today, I’m not sure why you’d want road tyres.

They enhance the riding off-road so much, letting you climb up rocky paths, use the ABS hard off-road on gravelly and rocky drops, yet allow you to drag your boots on some of the twistiest roads I’ve ever ridden. Sure, the tyres and that punchy 125bhp motor mean you can make the next generation traction control light start flashing when really having a go on the road, but then this tyre will take you to the top of a mountain, too. On road tyres, I doubt you’d notice the traction control working at all.

On the road, with traction-off, it leaves big black lines out of corners in a predictable, but this could really kind of hurt way, such is the smooth nature of the motor and its torque delivery.

Purists of GS heritage will notice this bike gets a new, restyled front-end (the same as all the 2017 1200GS range), a shorter screen, radiator guards, wide bear trap style off-road footrests, removable pillion pegs, an enduro seat at 860mm or 840 adjustable high with a sort of half a pillion pad, frame protectors, hand guards, those lush wire-spoked black rims, a black engine, plus left and right pannier fittings. It’s not a whole lot different to ride, but the changes are noticeable.

Pavey’s team run the 5-day holidays in Portugal, as well as the BMW Off Road Skills courses in Wales.

You’d be forgiven for thinking the bikes from the BMW school would be factory specials, but they’re far from it. They’re totally standard, except for engine crash bars, barkbuster hand guards, and the optional Metzelers. The guys from the school tell us that they’ve played around with tyre pressures but remarkably they work on or off-road at 32psi, not at lower pressures as you might expect in the dirt.

It’s true that almost all R1200GS’s bought in the UK have optional ESA (semi-active suspension), and as an option on this bike is the new generation ESA. 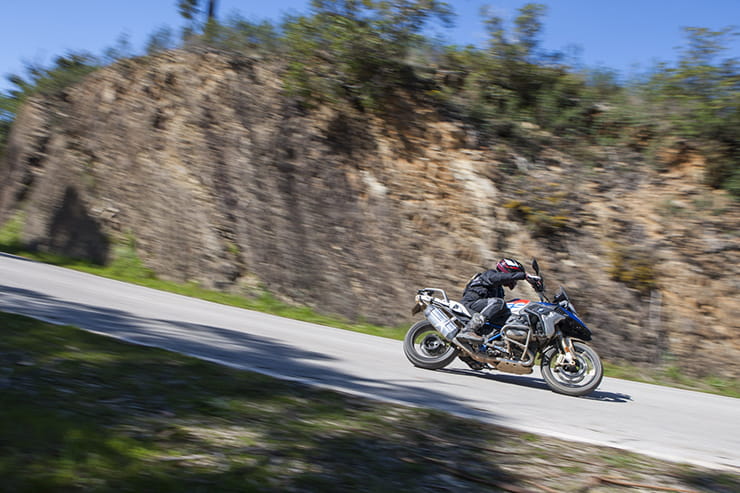 But the bike I spent most of the time riding today had good old-fashioned BMW Paralever front forks with zero adjustment, and a basic rear shock with adjustment for preload only. What they can cope with off-road is phenomenal. Bang them off some rocks, pile it into ruts and it gets on with it. ESA definitely improves the ride, and stops the bike pitching and diving at the rear, especially on the road, but the standard stuff never feels wrong. In fact, it feels more natural for road riders brought up on standard suspension. But the ESA definitely makes it quicker cross country.

Other than that, the bikes we tested has an LED front headlight, the new riding modes pro system which includes, road, rain, enduro and dynamic riding modes.

Dynamic gives the best throttle response, and a more aggressive fuel map, road setting calms it down, and rain dumbs down the power and winds up the traction and ABS to suit.

The ABS Pro system also features cornering ABS and hill hold too. On the trails we did some brake tests from 40mph or so and it’s barely noticeable that the ABS is cutting in. It stops up so quickly. Pavey himself is a big fan and reckons he can only just out brake the bike’s own system. He’s an off-road legend, not a normal bloke like you and me.

I usually hate most ABS systems off-road, but I left it switched on pretty much all day. This being Portugal, more than one loose dog ran out of a farm and gave the Brembo calipers and Bosch ABS system a real-life test. The dogs all survived, so it must be good.

It’s the same for the Dynamic Traction control. Off-road, it finds grip when you get too eager on the gas. Personally, I had it switched off most of the time so I could feel the rear sliding. It’s all about personal preference, but the traction-control will never hold you back.

As standard the bike comes with gear shift pro too. It means you can do clutchless up or downshifts. Juts flick the gear lever up or down and it changes allowing full throttle on the way up, and then blips the revs on the way down. It’s a brilliant bit of kit and makes you feel less tired off-road as your clutch hand is almost redundant, except at low speed and when stopping.

The bike is comfortable, it feels much narrower at the base of the tank with the enduro seat on, especially when standing up. The short seat is a bit hard for big miles, but then any of the BMW GS seat options can be fitted.

I’d have the shorty, good-looking sports seat for day-to-day and off-road, and a comfort seat for longer rider. Those bear trap pegs kay be designed for off-road, but they give loads more feel and grip, and help you move the bike around off-road. They give better feel through the chassis on road too.

In general the R1200GS Rallye is a GS made even better. It doesn’t compromise the already remarkable ability of the standard bike, it just enhances it, and makes the Rallye even more capable, even more flexible, and even more ready to take on a round the world trip, or a blast up your local green lane than before. It somehow seems to bring even more of a heart and soul to the GS and is the best-looking GS in the range.