The Top 10 Best Selling Motorcycles in the UK for 2021

The year 2021 has been a good one for the motorcycle industry in the United Kingdom with sales up across the board, consumer confidence seemingly riding high and a bevy of quality models to squeeze onto your Christmas list if you’ve been a particularly good boy or girl.

Sales to the end of November confirmed the UK has already exceeded the totals of 2020 with a month to go and before someone cries at the back ‘that wouldn’t be difficult given the impact of COVID last year’ we would respond that you’re absolutely right, but that also it took only 11 months to exceed the totals of 2019 too. That and we didn’t exactly start 2021 off completely free from lockdown either.

Point is, consumers have returned to purchasing PTWs (powered two wheels, the term the MCIA – Motorcycle Industry Association - uses to describe motorcycles and scooters) in droves, which can only be good news for the trend to continue into what will hopefully be a lockdown free 2022… Omicron notwithstanding, of course.

But what have you been buying out there? Yes, we’re perhaps jumping the gun by revealing the ten best-selling motorcycles and scooters of 2021 in mid-December, but if you haven’t been a good enough boy or girl to have something two-wheeled wrapped up the tree, then the January sales start approximately 00:01 on Boxing Day now, so we figured why wait? 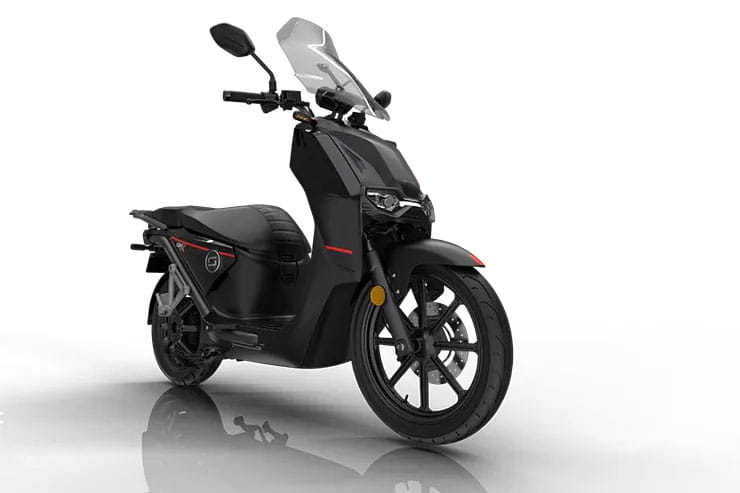 The significance of seeing the Super Soco CPX inside the overall top ten best-selling two wheelers in the UK should not be underestimated. This is a brand that was only founded in 2015 in Australia as Vmoto before joining forces with China’s Soco to begin global distribution of its low-cost, smartly-designed electric scooters and motorcycles.

It has been in the right place at the right time for the scooter market’s logical shift towards zero emissions urban runarounds and won favour with its cheap deals and modern styling, while it has landed some fairly high-profile tie-ins, from its Ducati MotoGP-liveried CUX to even its endorsement from triple MotoGP World Champion Jorge Lorenzo.

And now, its best-seller - the Vmoto Super Soco CPX to give it its full title - has squeezed into the overall top ten for 2021, breaking ground as the first electric-powered model to reach such upper echelons.

Motorcycle buyers might continue to shy away from electric but the same cannot be said for scooter buyers, with the only thing stopping the CPX from climbing higher in 2022 likely to be the growing number of alternatives in its market space.

Click here for our review of the Super Soco CPX. 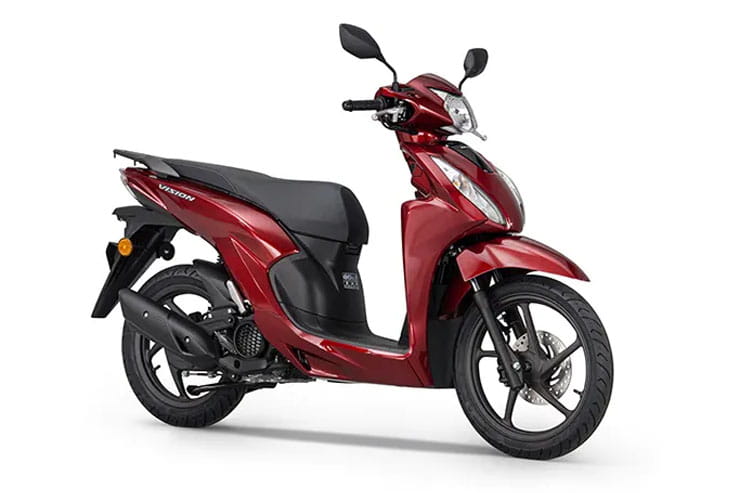 Start-up electric brands like Super Soco may be penetrating the ever-popular scooter marketplace, but that doesn’t mean it is the UK’s favourite run-around. In fact, in a top ten of five scooters and five large motorcycles, the CPX is the fifth most popular scooter in the UK… and this is the fourth, the Honda NSC 110 WH - or Honda Vision to you and me.

For many who prefer their scooter to drink from the fuel pump, a scooter with a Honda badge remains the top choice… and you’re certainly spoiled for choice. In fact, Honda offers ten variations on the scooter formula, not including the barmy Honda X-ADV scooter-cum-adventure machine.

Its entry-level Vision though remains very popular from this broad selection, offering all that Honda gravitas in a slender, stylish and good value package. 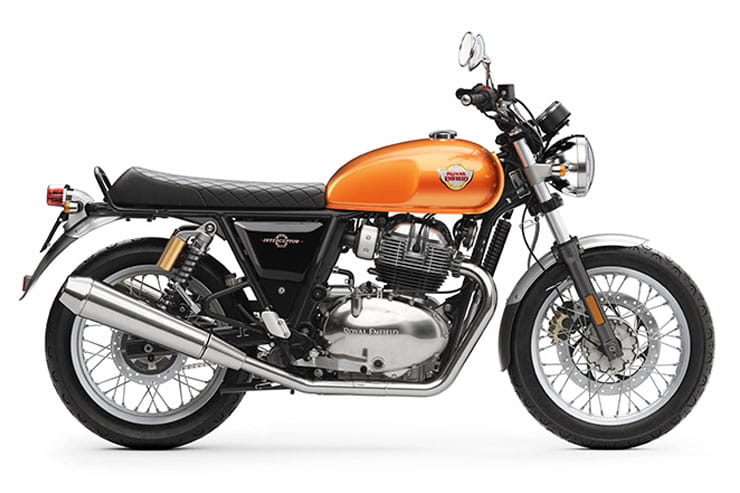 This has been a very good year for Royal Enfield as it continues to make strides beyond its crucial domestic Indian market, where even a moderate downturn in sales impacts its entire global count, such is its big bike homegrown dominance when it comes to big bikes.

Indeed, us Brits are having a bit of a love affair with the one-time English marque, as demonstrated by the excellent early sales for the new Meteor 350, which would be knocking on the door of the top ten here had it gone on sale earlier in the year.

Nevertheless, Royal Enfield is still represented in the overall top ten by the larger Interceptor 650, with buyers adoring its no-nonsense classic styling, bargain price tags and honest running gear to choose it over myriad models it is pitched against like the Yamaha XSR 700.

New rivals from Kawasaki with its Z650 RS and the even cheaper CFMoto CL-X Heritage threatens its number one spot for 2022, but the Meteor 350 should keep things in the black all the same. 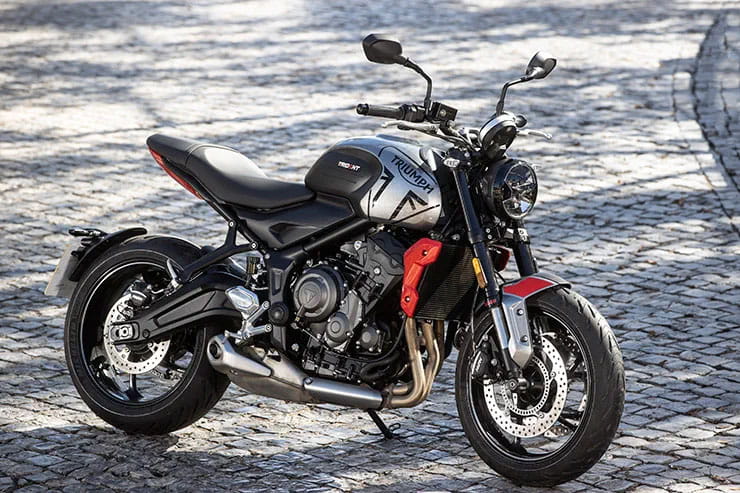 It’s a close run thing with the Super Soco CPX but the Triumph Trident 660 reigns supreme as the big British motorcycling success story of 2021.

A significant change of direction for Triumph to slot in a new entry-level model that could have threatened its premium image, instead the Trident 660 has swept in and bowled us over with its compact sporty looks, rumbling triple-cylinder engine and engaging ride.

The British marque is on something of a roll at the moment having overhauled its entire range over the last 24 months, with sales reflecting the general pride us Brits have in supporting a rapidly growing homegrown manufacturer - something that can’t be said for the depleted automotive sector.

This will give confidence to Triumph as it prepares for an even more significant change of pace with a new range of ‘baby’ models built with Indian firm Bajaj, with a low-capacity Trident expected to be the first fruits of that labour. Based on the reception of the Trident 660, it has every reason to be optimistic for 2022.

Click here for our review of the Triumph Trident 660. 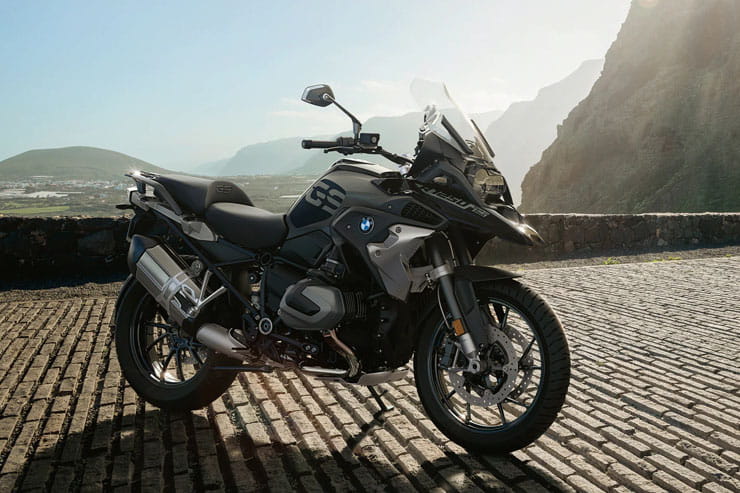 The stalwart of best-sellers lists across Europe, the BMW R 1250 range would feature even higher if the MCIA decided not to consider its different iterations - RS, RT, GS and GS Adventure - as separate models in its data.

That should give you a clue as to what’s coming up further down, but in sixth place the BMW R 1250 GS demonstrates the enduring popularity of the German’s marque’s class benchmark.

While the more enthusiast among you may groan that the GS isn’t as durable, stylish, well-equipped or as engaging as other rivals, truth is few combine those traits so neatly into a handsome and easy-to-use package.

It’s the go-to for those that want to get the job done, so it’s little surprise its place in this list is protected by some dedicated brand loyalty. 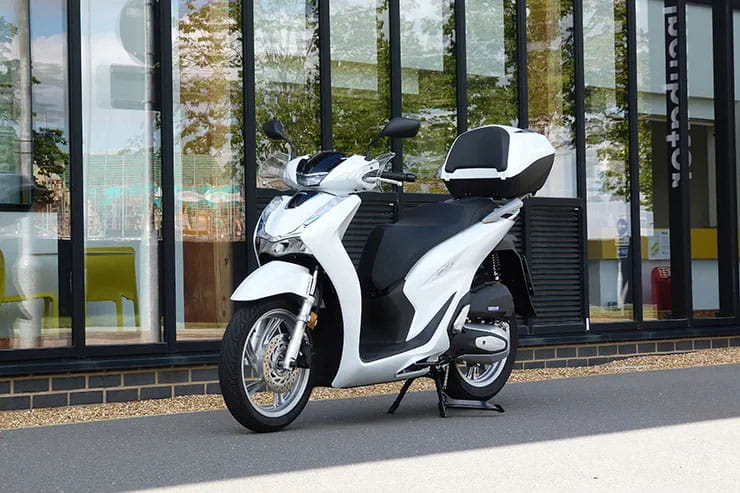 The second of three Honda scooters to feature in this list (and one of four total for the UK’s dominant brand), the Honda SHi 125 appeals to those who just want a bit more oomph compared with the Vision.

Honda considers it the ‘elegant’ option, which in layman’s terms means it is better equipped and a bit more powerful than the entry-level Vision, while it is still enamoured with the quality Honda engineering that enduringly appeals.

Click here for our review of the Honda SH125i. 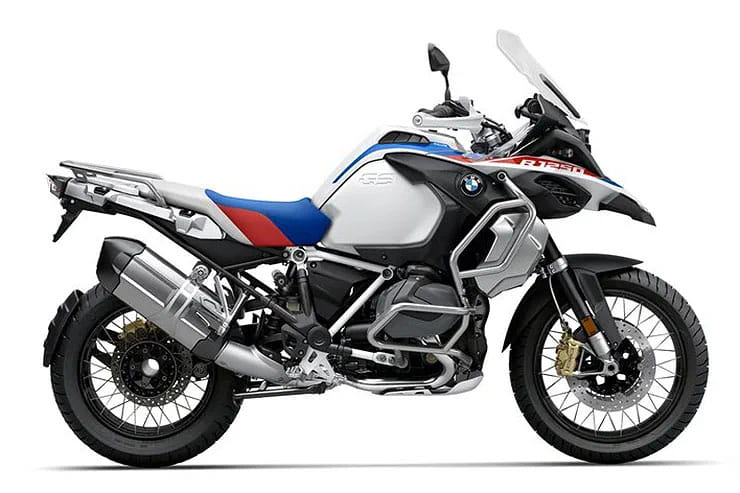 Do you sense some Deja-vu? The BMW R 1250 is up again, this time at No.4, but this time in its most popular GS Adventure guise.

Described by BMW as the ‘Queen of Touring Enduro’, gender politics aside it is certainly the master in terms of sales when it comes to Adventure riding. Compared with the GS, it has been designed with the great outdoors in mind with chunkier wheels, beefier bodywork and revised suspension.

While one would think the GS Adventure would cannibalise the sales of the similar GS - after all, would you buy a Big Mac or a Double Big Mac? - but the strength in sales for both models year after year shows that sometimes it is worth saving some pennies and calories. Sometimes.

Click here for our review of the BMW R 1250 GS Adventure. 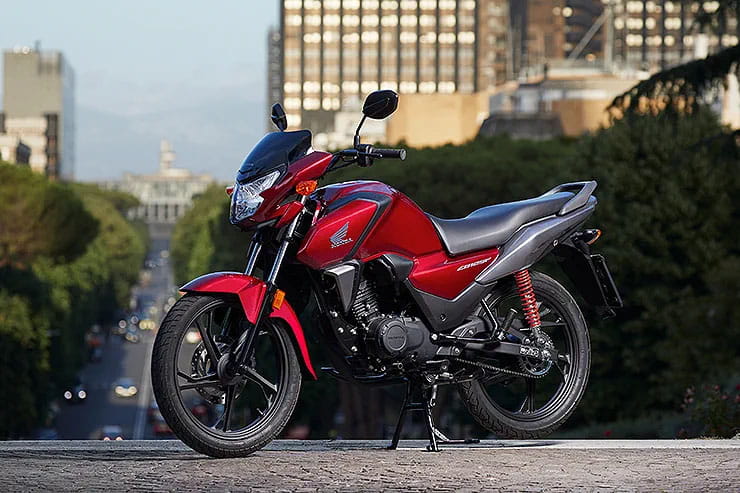 Not unsurprisingly it is another Honda, which holds onto its mantle as the best-selling big motorcycle brand in the UK (and the world), in the form of the no-frills but heaps of fun CBF 125.

Yes, its engine is small and it skirts on the basic, but the Honda CBF 125 is specifically designed as the transition bike for those making the step up from ‘twist and go’ scooters to a proper gear-changing, clutch equipped motorcycle.

And from that point of view, it is an easy motorcycle to love, being light, peppy and a doddle to ride, while again Honda’s winged badge definitely instils a level of confidence for those perhaps a wary of sitting up a little higher than they are used to.

Click here for our buyer's guide and review of the Honda CBF125 or click here to find our what's new on the 2021 model Honda CBF125. 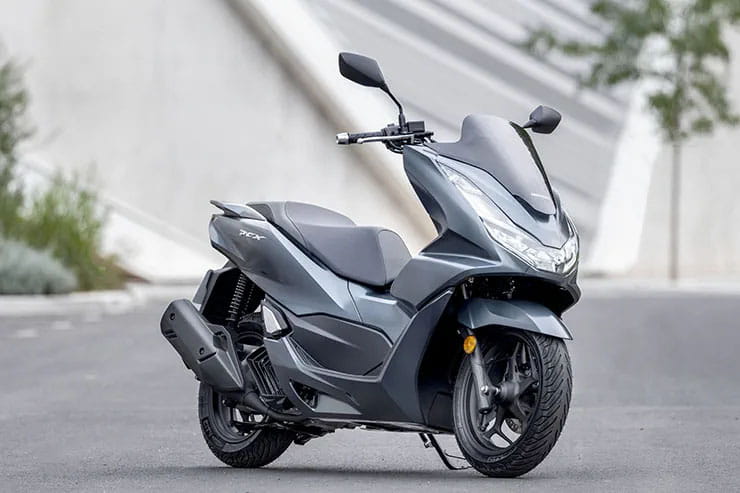 For anyone familiar with UK sales charts, it is no surprise to see which two models out-ranked any other in 2021… however, you may be rather surprised by the gap!

Indeed, last year the Honda PCX 125 was THE best-selling powered two wheel of all, but not only has it lost its coveted spot (we won’t give any spoilers) but it has been outsold nearly 2 to 1.

This is more of a reflection on the incredible sales for the winner (see below) than Honda dropping the ball, with the Honda PCX 125 still a handsome, well-equipped, easy-to-ride and punchy scooter option.

The King isn’t dead per se, but it certainly needs to pick up the pace in 2022… 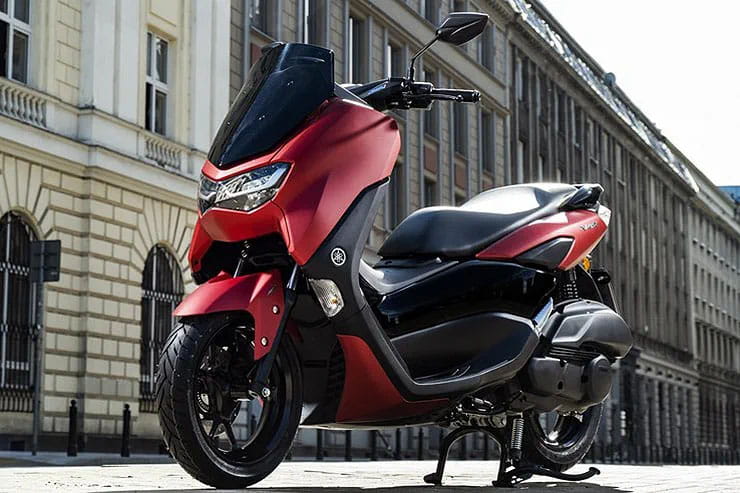 Behold, the best-selling PTW in the UK for 2021. This year has seen the Yamaha NMAX 125 not only dethrone its main rival, but pretty much nail itself to said throne.

With almost double the sales of the PCX 125, the Yamaha NMAX 125 has been a runaway success for the Iwata marque in a year that otherwise didn’t see a single other Yamaha trouble the top ten.

Indeed, this is a result to celebrate for Yamaha which has been rewarded by consumers finding pleasure in the NMAX’s sharp understated styling, feathery nimbleness and excellent value, while like Honda it benefits from Yamaha’s reputation for fine durability and modest running costs.

With a 4% share of the entire PTW market in the UK, it’s going to take something special - or a mega cashback deal of sorts - for a rival to prise the Yamaha NMAX from its well-earned perch.

Click here for our review of the 2021 Yamaha NMAX.

Figures courtesy of the MCIA