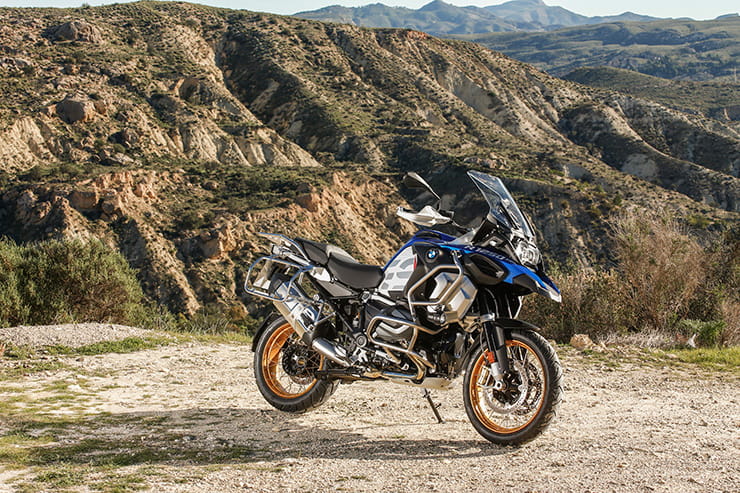 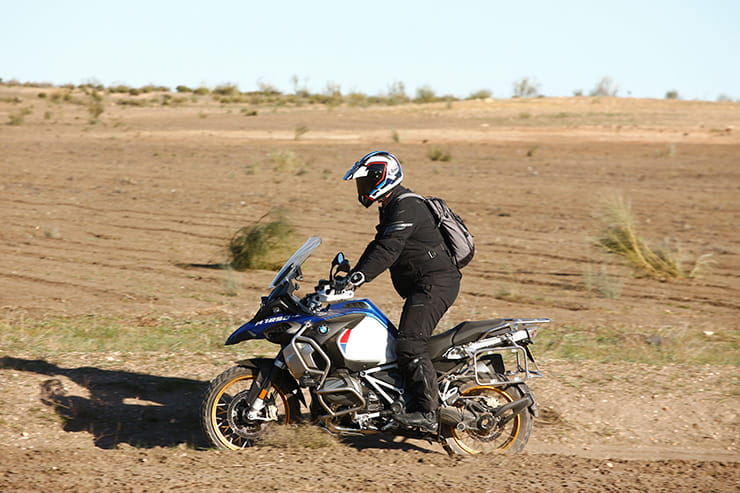 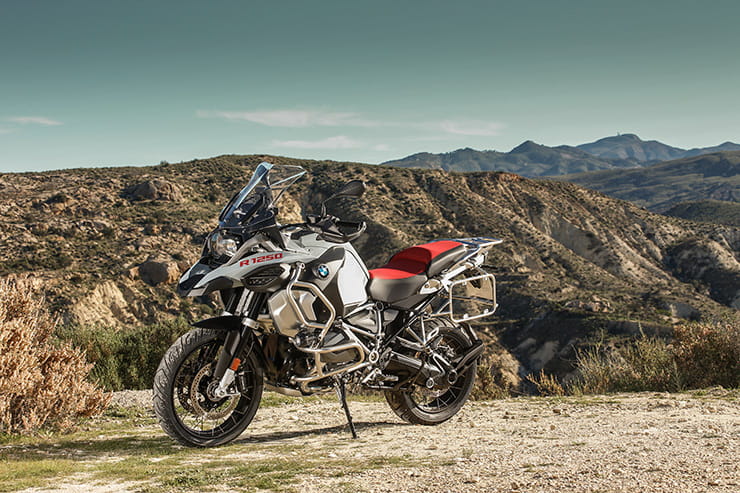 Otherwise, much of the GSA is unchanged. There’s still the big 30-litre tank and longer suspension but it does get the classy, 6.5in full colour TFT dash only previously available as an optional extra. Lights are also now LEDs front and rear, hill start and ASC are added and there are a few detail changes. On the slight downside, front calipers are now BMW branded by US firm Hayes instead of the previous Brembos. 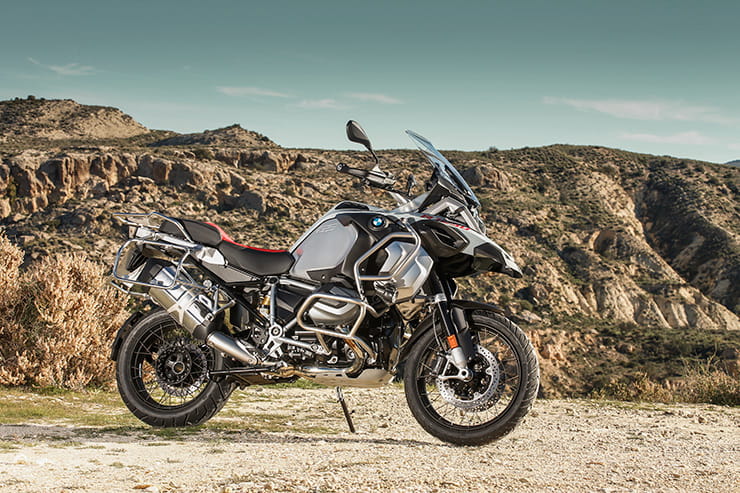 TE only comes in grey

A handful of sentences about the price, availability, PCP options, colour options and their prices (if affected)

Price of the new base R1250GSA is £14,415, which comes in grey, just two riding modes and not a lot else. For £14,865 you get the Rallye, with fancy BMW Motorsport colours and gold wheels and after that it starts to get interesting. The TE (£17,550) gets three extra riding modes, Dynamic Pro, Enduro and Enduro Pro, heated grips, quickshifter, onboard computer and so on. The Rallye TE (£18,100, as tested here) is the TE in Rallye colours while the Exclusive TE is a TE in natty metallic khaki. 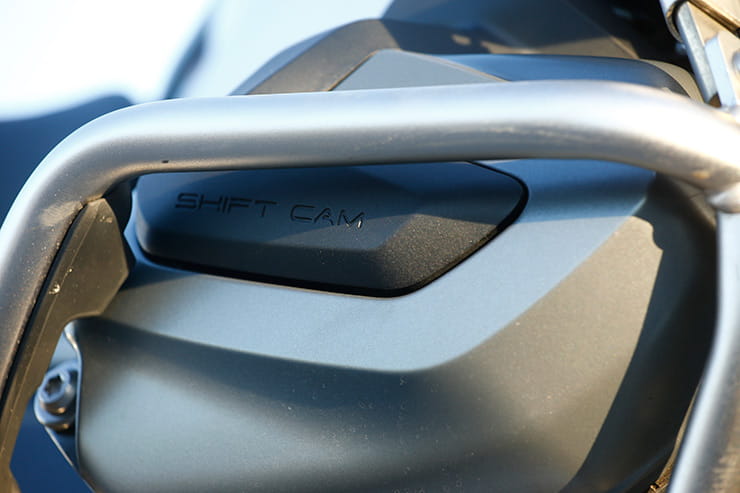 As virtually all the changes to the 2019 GSA are about the new ShiftCam engine it’s a good job they really make themselves felt.

Apart from an extra, useful 84cc, the uprated engine utilises a novel cam system whereby a choice of two cam lobes operate each valve instead of the usual one. A softer, ‘partial load’ cam is employed at low rpms and maximises torque and low-speed driveability while a ‘full-load’, more extreme cam maximises peak power and takes over via a clever shifting mechanism (or as dictated by throttle usage) above 5000rpm. The result is an impressive and useful 14% boost in peak torque and 9% in peak power.

At low speeds it’s more tractable and responsive, which is a boon on a bike as big and bulky as this, while above 5000rpm there’s a sense of ever-increasing drive, climbing towards six then 7000rpm, getting more eager and exciting as it goes, before finally tailing off just before the 9000rpm redline. Best of all though is how refined, smooth and sophisticated the whole delivery is, with no steps or flatspots anywhere and the whole sensation noticeably smoother, too. It may not quite be a rip-snorting Ducati Multistrada or KTM Super Adventure, but the GSA has had an injection of thrust and excitement that is welcome without losing any of its characteristic flexibility and practicality. 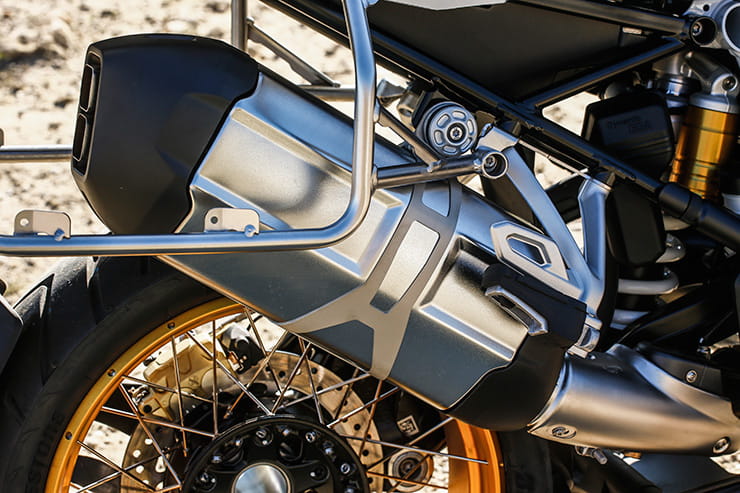 Exhaust has also been retuned to suit

Outwardly the new ShiftCam unit, apart from the cam covers, looks virtually identical to the old, while the gearbox is unchanged, too. The exhaust is slightly different, however. What impresses most, however, is not just how effective and how big the gains the ShiftCam system brings, but how immediately smooth, refined and sophisticated its delivery is. This, truly, is a boxer for the 21st century (which is apt, as BMW’s boxer unit celebrates its 100th anniversary in 2023…) 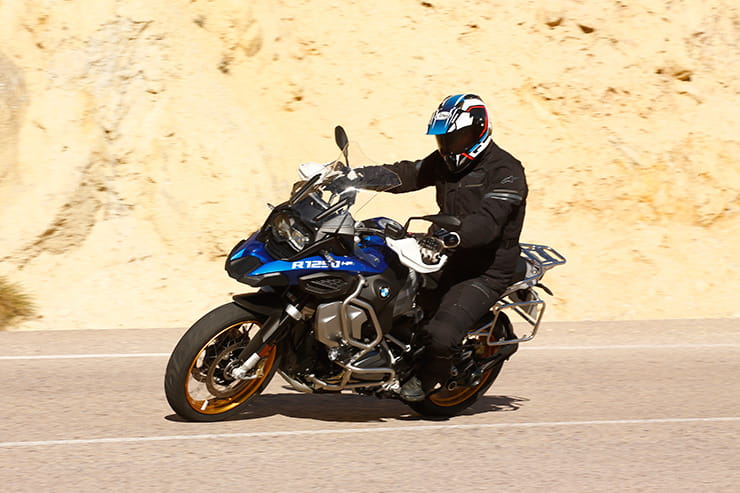 Ridden gently a range of up to 400miles is possible

BMW claim a healthy 59.6mpg for its new powertrain, which is impressive enough, and which, combined with the GSA’s massive 30-litre tank gives the potential for an enormous 400-mile range before fill-ups. In reality, of course, it’s all down to how aggressively you use the throttle. On our test around Almeria in Spain, where, to explore fully, the benefits of that new engine it was ridden, shall we say, far more ‘enthusiastically’ than most, the on board computer figure routinely showed figures in the low 40s down to a low of 39. 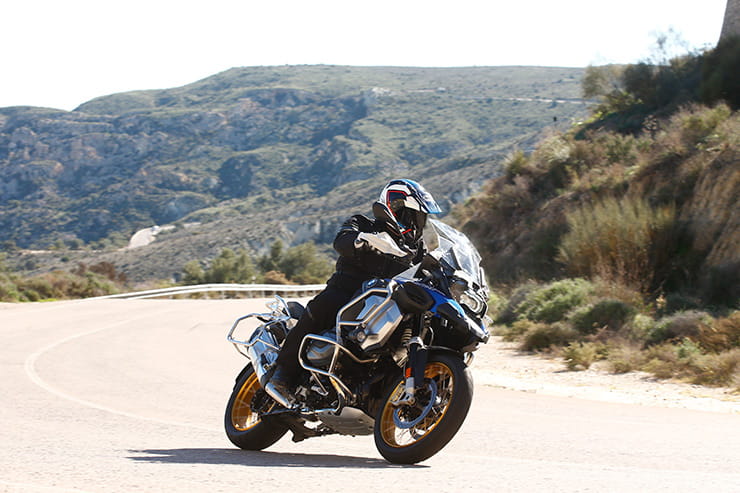 With the rolling chassis unchanged, handling is as good as ever

With the rest of the bike pretty much unchanged so top are the 2019 GSA’s handling characteristics – although there’s not too much wrong with that: although tall, bulky and, with a full tank, slightly top heavy, from the saddle its manners are far more docile than you might expect. Steering, despite the 19-in front wheel, is neutral and, depending on the tyres, it tracks well (for our off road ride the bike was fitted with semi-knobbly Karoos which made it tip-toe more than a bit on Tarmac). The ride is plush and controlled (and all the more easily adjustable if fitted with BMW’s Dynamic ESA option) and only rarely at slow speeds did its hefty weight become a handful. Shorter riders should beware, though. With a 890mm seat height (although lower versions are an option), disembarking or putting a securing foot down in traffic can become a fraught affair… 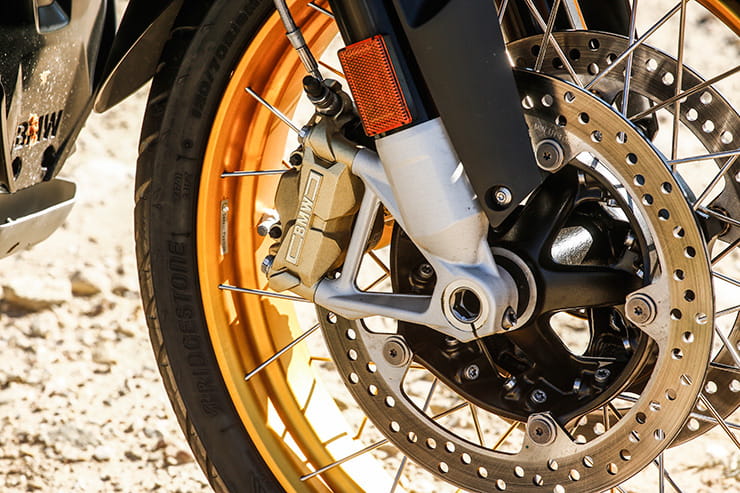 Front calipers are no longer by Brembo

Apart from the engine, one of the other most conspicuous changes to the GSA for 2018 is the switch from Brembo radial calipers at the front to similar items which are BMW branded but actually made by US firm Hayes (previously best known for bicycle products). No, we hadn’t heard of them either. In reality, although there have been whispers of slightly reduced performance from other testers, on the road I had no complaints and found them wanting for nothing. It is a little disappointing, however, to see such an obvious cost-cutting measure on what after all is a premium machine. Inexplicably, the rear caliper is still a Brembo… 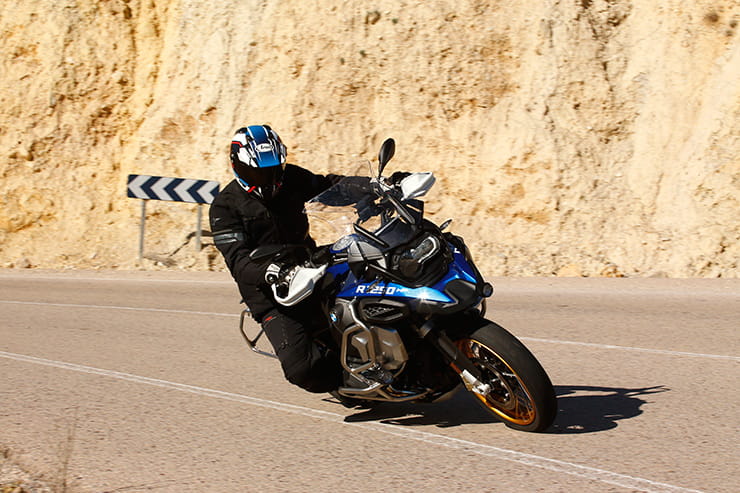 The GSA saddle remains a pleasant place to be

Motorcycle riding positions don’t get much more regal – or tall. Assuming you can happily climb on board the GSA, however, it’s as sumptuous a place to be as ever. The rider’s eye view, being so tall, is commanding, the ergonomics are perfect (and adjustable), the seat without complaint and, being the GSA with a larger frontal area and screen, means weather protection is fabulous, too. This degree of comfort has always been a large part of the appeal of big adventure bikes and the GSA – still – delivers better than most. 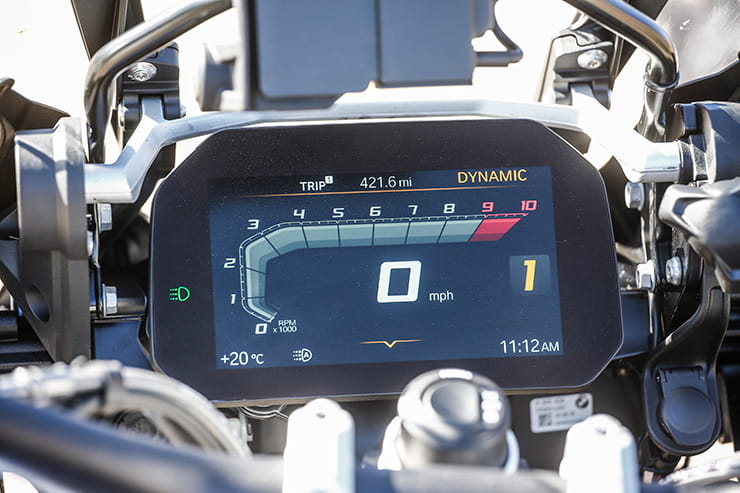 6.5in TFT dash is a welcome addition

Again, there’s not much new to report here seeing as the GSA, engine apart, is little changed from the old – but then there’s not much wrong with that. The base level version doesn’t get much – just two riding modes (Rain and Road) and ABS, but there is now ASC as standard plus BMW’s hill start system, lights are now LEDs front and rear and, best of all, there’s that classy new full-colour, 6.5in TFT dash which was only available as an option last year. Of course, being a BMW, if you’re willing to pay extra the world’s your oyster. Five versions are available with whole accessory catalogue on top of that. Our test bike came in TE spec with three extra riding modes, Dynamic ESA, cruise control, heated grips, on board computer, quickshifter and keyless ignition but is over £3K more than the base model. 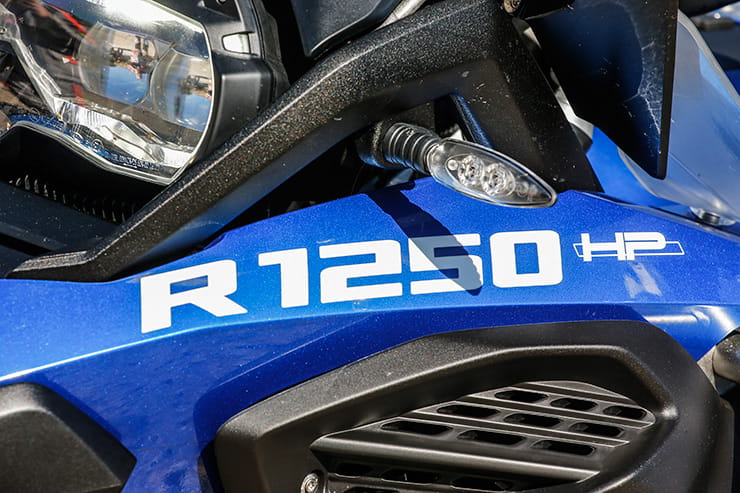 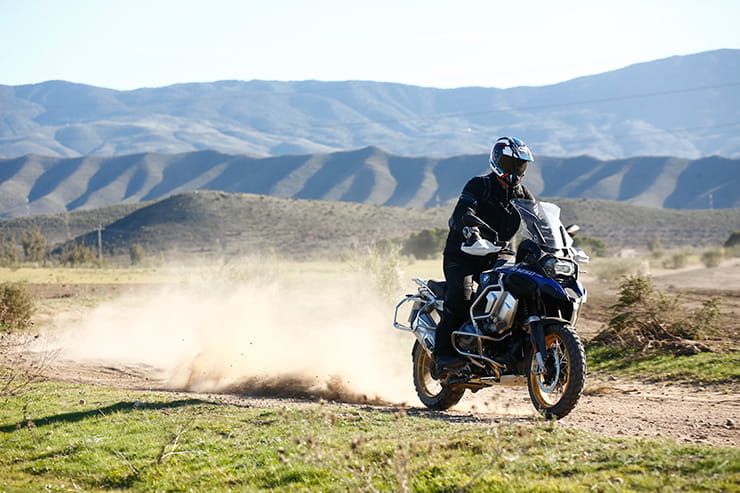 Next stop Morocco – the GSA really can go anywhere!

Don’t be fooled. The new 1250 GSA might not look much different than the old, virtually all of the ancialliaries are unchanged and, anyway, there wasn’t that much wrong with the old one – but this is a significant step-up for BMW. The effect of the new ShiftCam motor is, quite simply, a revelation and has reinvigorated a bike which, let’s be honest, though brilliant, was becoming something of an old atger. It might not still have the hooligan zap of, say, its Ducati and KTM rivals, but it’s a far more rounded, more useful and classy machine and one which now has enough zap to show those whippersnappers a thing or two. 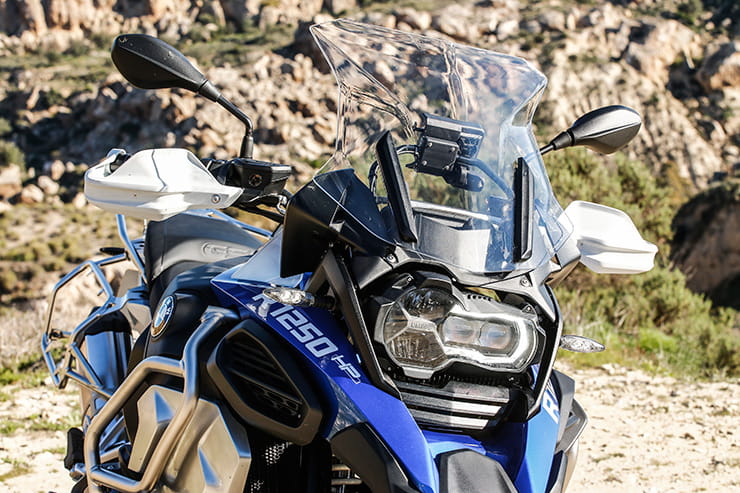 New LED lights are a plus as well

Three things I loved about the BMW R1250GS Adventure…

• Requires all the options to really sing