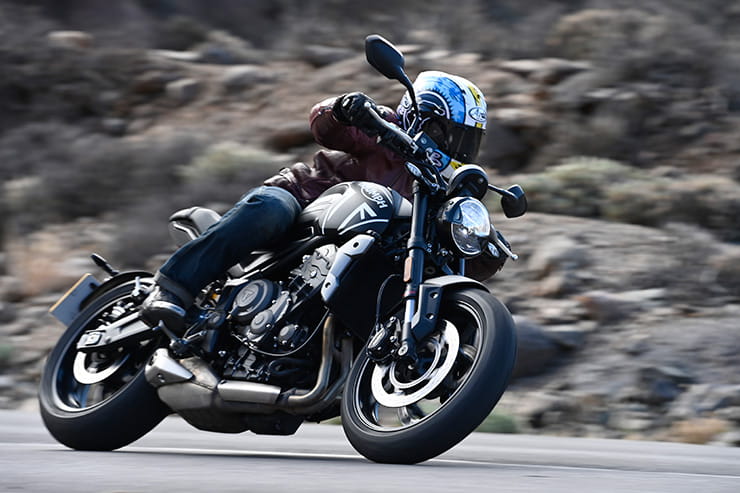 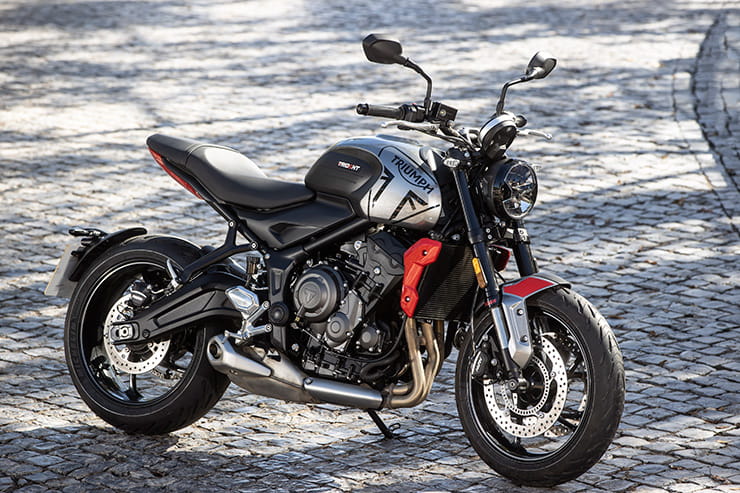 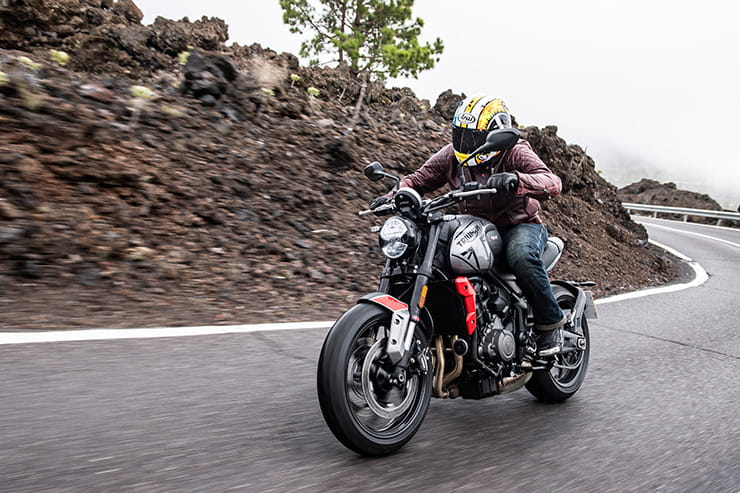 This is a hugely important bike for Triumph. The Trident jumps into the entry-level naked market as an attractive, punchy middleweight to take on the strong and established competition such as Yamaha’s MT-07, Kawasaki’s Z650 and Honda’s CB650R. This segment counts for an increasing number of sales and is key for manufacturers hoping to attract new riders; getting them on-board with their brand as soon as possible. You can’t underestimate the importance of this new British bike, which should feature highly in the Triumph’s sales chart in 2021 – but have the got it right? We tested the Trident in Tenerife.

This is a highly price sensitive market. A few hundred pounds can make the difference between a sale and a goodbye, especially as customers are likely to be budget-conscious new riders or more experienced riders getting back into bikes.

Yamaha has a new MT-07 just around the corner (its price is still to be confirmed) but with the 2020 model positioned at £6697, I’d estimate an on the road figure below the £7k mark. Kawasaki has also updated their Z650 for 2021 – the new model hasn’t been launched yet, but its price has been confirmed at £6849. Honda, meanwhile, is arguably the Trident’s closest competition with their inline four-cylinder CB650R, again updated for 2021 and currently priced £7199.

Although the Triumph’s £7195 showroom price may be slightly higher than the Japanese competition, the cost of ownership should be lower. The first major service is at 10,000 miles, which represents a significantly wider interval than the mentioned bikes, while workshop hours are also reduced, meaning it takes less time to service and maintain, thus saving owners money.

The Thai-built Trident is a completely new bike for 2020, and even at a standstill oozes quality. At face value, £7195 looks good. 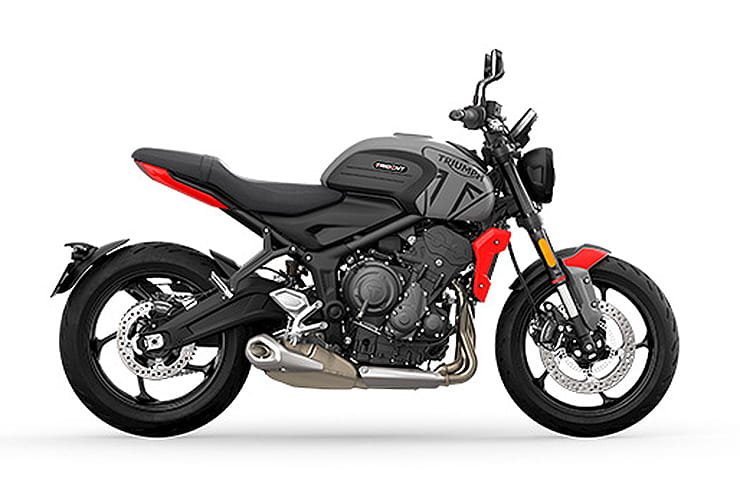 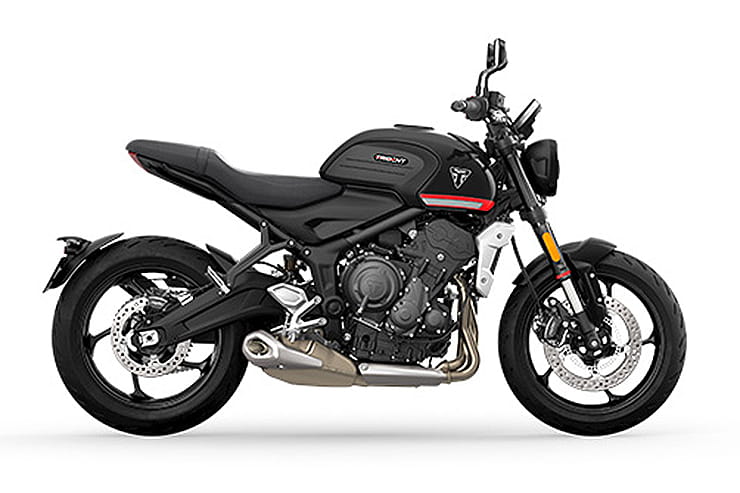 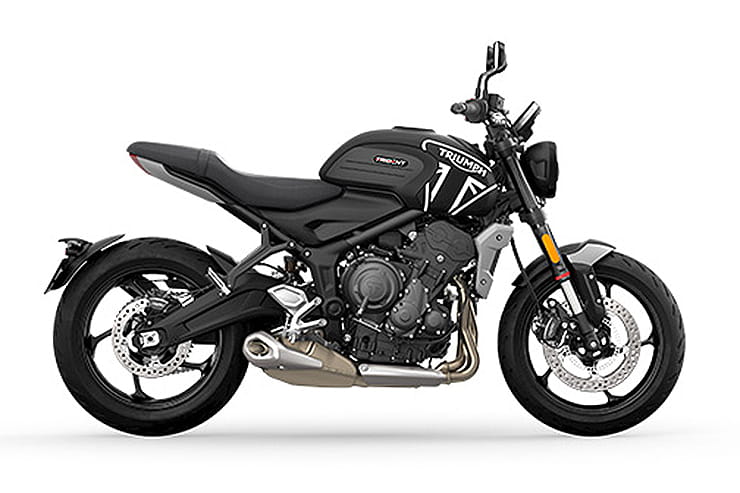 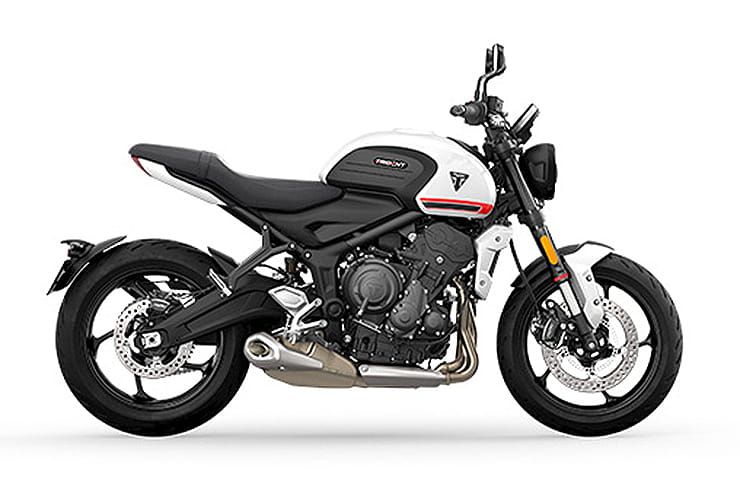 Above: Available in four colour schemes

The capacity of the triple engine is 660cc, so some may assume it’s an electronically de-tuned Street Triple S, but that’s not so. It is based on the older wet liner 660 unit and is furnished with 65 new components. This obviously means a serious re-design: new crank, clutch and gearbox with different ratios.

Compared to the Street Triple S, first, second, third and fourth gears are shorter, fifth and sixth taller. As you’d expect the cams are redesigned to give more low and midrange torque.

The new Trident is available in A2 configuration (via an electronically and restricted throttle). This can be added and removed by any Triumph dealer and isn’t an added extra when purchasing the bike new.

Luckily, the stock system sounds excellent for a standard bike. I’m unsure how Triumph has managed it but, despite being Euro-5 and an ‘entry-level’ bike in a relatively mild state of tune, it sounds great. At low revs there is a nice burble, and then a slight change around 3000rpm that is more charismatic – and unmistakably a Triumph Triple – before it howls into the rev-range’s upper reaches. I would love to try it with the optional quickshifter.

Power is soft and forgiving on the first 10-15% of the throttle, almost like there is a slight lag If it had a throttle cable as opposed to fly-by-wire I’d want to adjust it, but this softness is perfect for new and inexperienced riders. After the initial turn of the throttle, it is more direct but still smoother than Barry White’s chat-up lines. There is a fluid feel to the Trident, and the Rain mode softens the power delivery further.

The Trident’s performance is strong. The triple layout is the best of both worlds, having the torque of a twin with the free-revving excitement of an inline-four. With 90% of peak torque on tap from 3600rpm, it drives positively from low down. You can make quick and easy progress without tapping back too many gears. But, if you should want to have fun, go down a gear or two on the smooth gearbox and the Trident will deliver ­– even to experienced hands. Turn off the traction control and you can have some mono-wheel fun, too, all the while accompanied by that charismatic triple soundtrack.

I did hit the rev limiter on a few occasions, whilst getting a little too carried away. But, to be fair, most of my two days of test riding was at altitude, which sapped power and didn’t do the new Trident justice. The point is that this is ‘entry-level’ bike is far from being boring or worthy. I covered over 200km on day one and didn’t want to give it back come evening, in fact I was already looking forward to day two – and I couldn’t say that about many other bikes in this market. 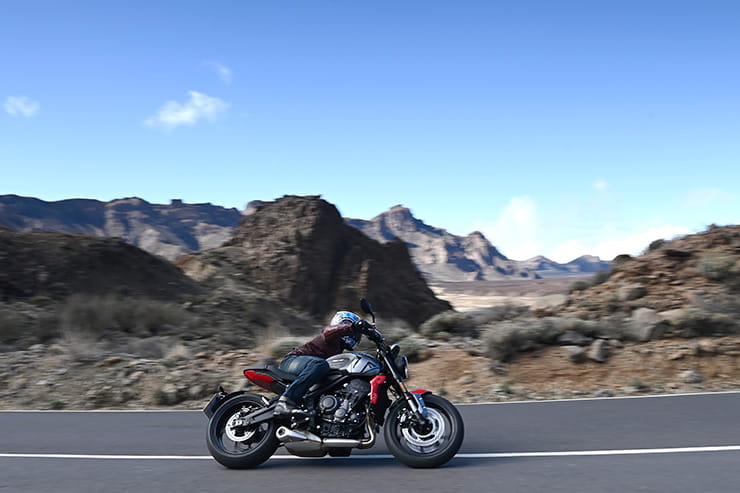 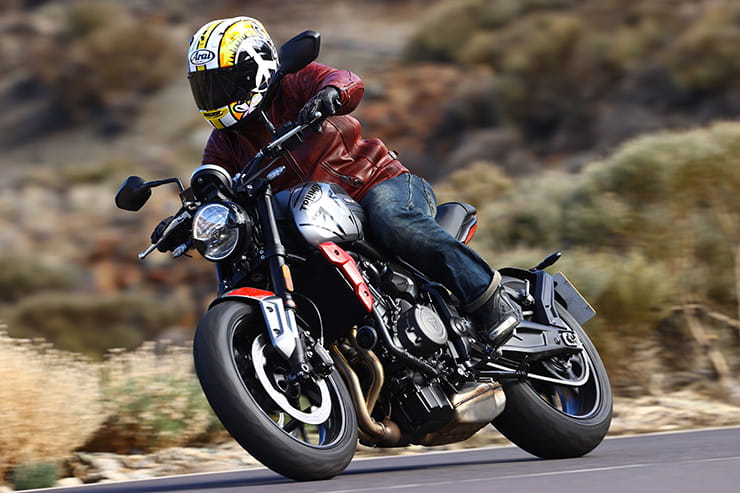 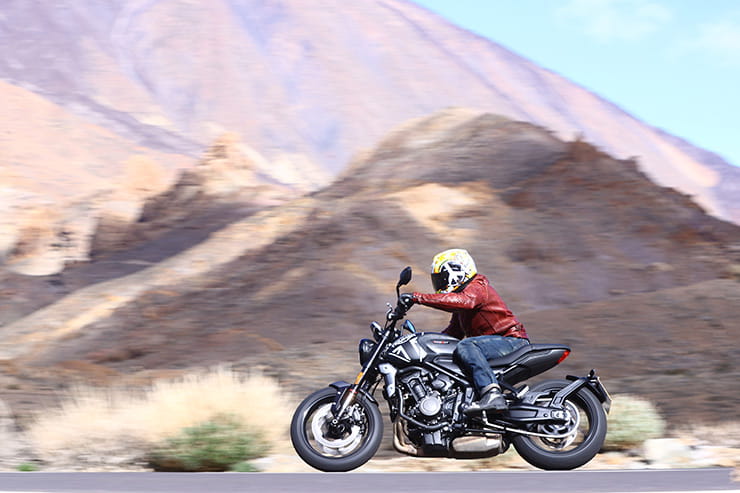 Triumph quote 60.1mpg or 4.7l per 100km. Riding aggressively on mountain passes, I whittled that down to 5.4l per 100km or 52mpg, which, considering my over-excited throttle hand, was an excellent return. The fuel light came on at 118 miles, which again isn’t bad from a 14l fuel tank. Riding normally, I’d expect around the 60mpg claimed figure, which would give a tank range of 186 miles.

Quoted wet weight is 189kg, on-par with the twin-cylinder machines in this field, which in theory should be lighter… and considerably lighter than Honda’s 208kg CB650R. The weight isn’t intimidating for small and inexperienced riders, while the 805mm (soft) seat is low and narrows towards the fuel tank. I’m 172cm tall and was flat-footed on both sides. There is a nice balance at low speeds and, once restricted to A2 licence conformity, the Trident shouldn’t be overwhelming for new riders, despite its masculine image.

Showa suspension controls the springs at each end; there’s no adjustment on the front and only pre-load on the rear. Again, Triumph has done a remarkable job: they haven’t thrown budget, softly sprung and underdamped suspension at the Trident. For new riders, the suspension is forgiving, easy to get along with and takes on 90% of road surfaces with ease – it’s even happy bouncing over speed humps like an excitable puppy.

Let the engine scream, up the pace… and even at speed the set-up works well. Ground clearance is plentiful, the Trident doesn’t drag its pegs like some of the competition, and holds a confident, smooth line. The natural riding position allows you to control and throw the bike around with relative ease, quality Michelin Road 5 tyres performing reassuringly in the cold and damp we encountered on the test (despite being in Tenerife).

When you really push on, the forks lack a little control under heavy braking but, overall, when comparing its sporty ability to the competition, the Trident’s handling is hard to fault. Yes, the Showa suspension lacks adjustability but 99% of riders won’t feel the need to twiddle anything, and there is all-important rear spring preload adjustment for when you are adding a pillion or luggage. 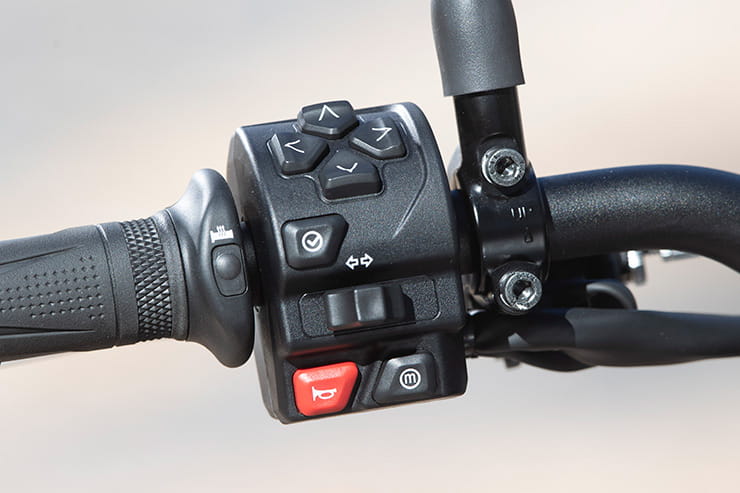 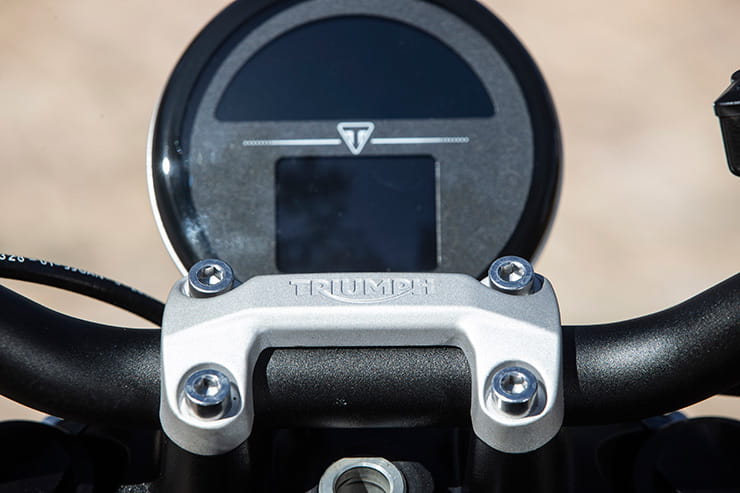 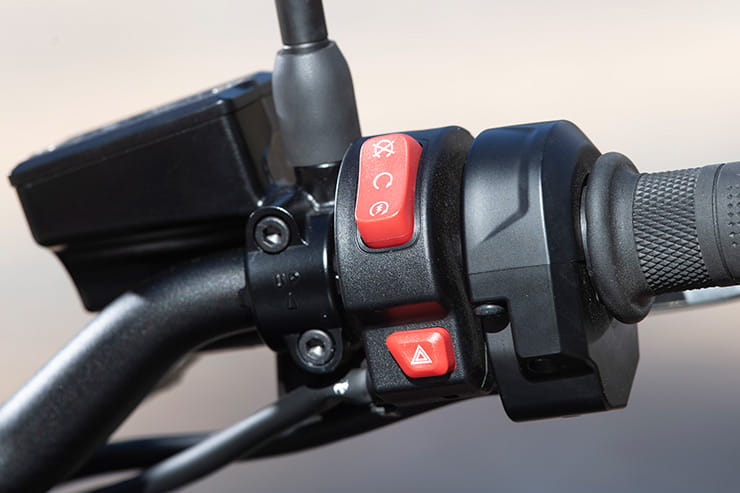 Up front, Nissin two-piston calipers, grabbing twin 310 discs, are just about up for the job. They have a progressive feel, the lever is span adjustable, and again are ideal for new riders. ABS as comes as standard, of course, but without an IMU they are not lean-sensitive. The ABS isn’t too intrusive, you can feel the rear working in extreme situations as the slipper clutch controls the rear wheel during aggressive down changes, but not the front.

Experienced riders opting for the Trident, perhaps as a second bike or moving down in capacity will soon learn that while one-finger braking is fine in normal riding yet the more energetic situations demand at least two digits on the lever. The stoppers are on par with the competition, possibly stronger than some, but will seem underwhelming for those moving down from more expensive brake set-ups.

There are two rider modes, Road and Rain, which is class-leading in this category and easily accessible via the new switchgear and full-colour TFT dash. Each mode changes the power characteristics via the fly-by-wire throttle as well as traction control and ABS. In Rain mode the rider aids are set higher. As mentioned, both TC and ABS are conventional and not lean-sensitive. In theory, the TC is switchable from Road to Rain, which can be altered while riding, but you can’t switch off or turn on the TC on the move. For example, if you switch off the TC, it is off in both Road and Rain modes, therefore if you deactivate the TC and ride into a rain shower you have to pull over and reactivate the TC. It’s a safety measure, really.

When active, the TC is smooth and not too intrusive. In the Road mode it holds the power back when it senses wheelspin, while the re-intervention of the power after a slide is equally smooth – impressive for an entry level bike.

My test bike was fitted with optional heated grips, and there are 44 additional items to choose from. From the tech side, you have My Triumph Connectivity System, which connects to the new TFT clocks, allowing phone/music, navigation, and GoPro access. There is also an optional USB charger, tyre monitor system and scrolling indicators.  There’s a list of cosmetic accessories including the billet belly pan which is pretty smart, plus luggage and security. Personally I’d be opting for the quick-shifter, which enhances every other Triumph I’ve ridden that’s been fitted with it. 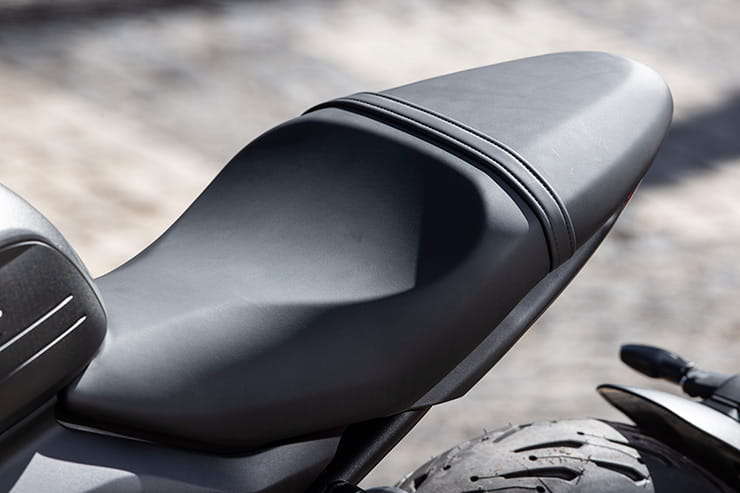 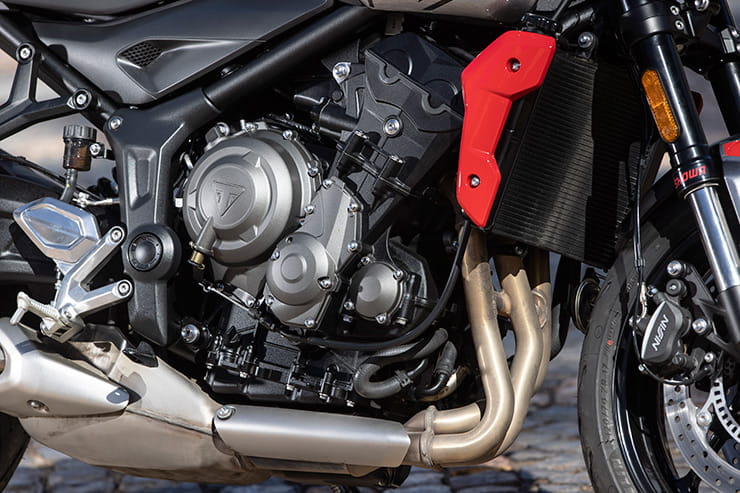 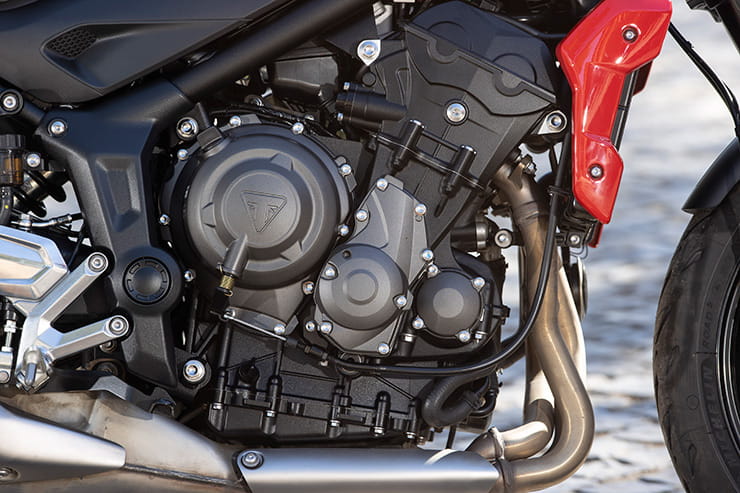 Triumph has entered a highly competitive market so the Trident needed to hit the mark – and it does. I like the looks and image, which are slightly more mature than the competition, and not as aggressive. There are some nice touches in the build quality, attention to detail and finish like the cutaway fuel tank and neat TFT clocks along with their Bluetooth connectivity.

The engine is soft low down, then delivers enough performance to raise your heart rate on the road even for experienced hands, and it is backed up by a lovely triple soundtrack that gives it soul and character. The handling is excellent, its low weight unintimidating while the brakes are just about up for the job. Well thought out electronic rider aids give it an extra tick above the competition too.

Even after two days of riding, the Trident was still rewarding and making me smile; it really is hard to fault when you compare to the competition and consider its low price.  Triumph is onto a winner here, and I can’t wait to see how it compares to the competition. But with a new Z650, CB650R and MT-07 for 2021, this category is more competitive than ever. And that’s not even including older offerings from KTM, Ducati and a host of Chinese manufacturers. 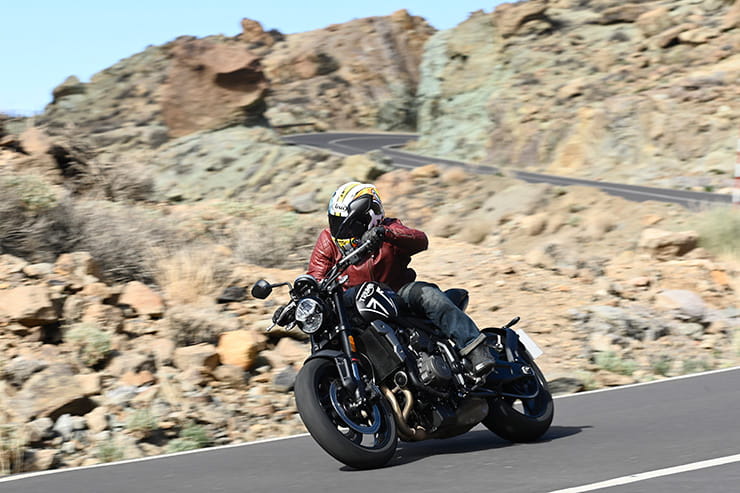 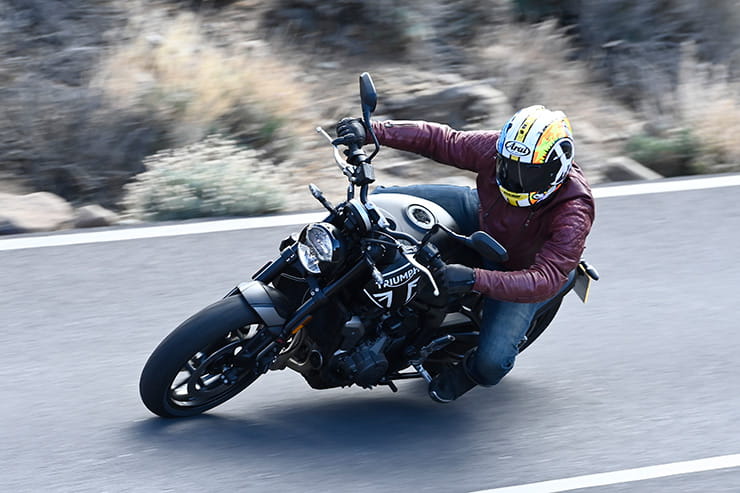