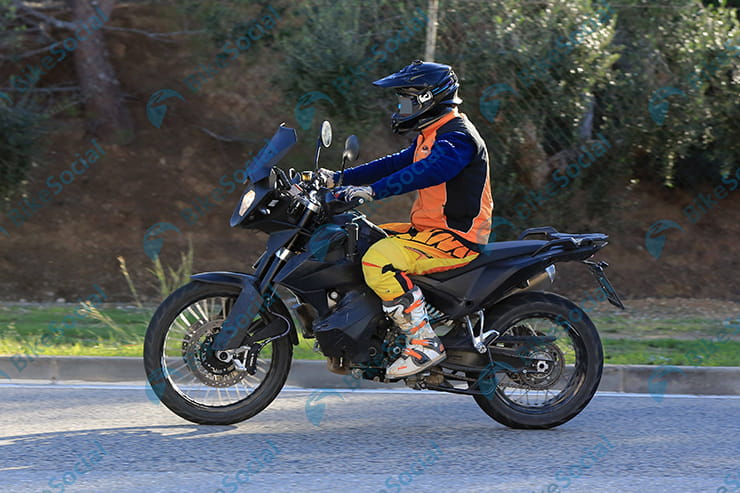 Sometimes a new bike comes along that takes us completely by surprise; a departure from the norm that simply couldn’t be predicted.

This is not one of those times.

That KTM is developing an adventure bike based around its all-new parallel twin engine perfectly fits the firm’s modus operandi, and the only surprise is that it will come after the naked Duke version using the same engine. Given the raging sales of the adventure bike sector, it might have made sense to make it the priority model.

These pictures show how the bike looks in its currents prototype state, although you shouldn’t read too much into the styling. The gaffa-taped bodywork will no doubt be tidied up considerably before the model’s launch. What’s much more telling is the prototype’s technical make-up, which isn’t likely to alter much before it is officially revealed.

The centrepiece is the new parallel twin engine. Previewed in the 790 Duke concept bike shown back in November, the new engine will power a whole line of mid-sized KTMs. Its inline layout is new to the firm, but provides a compact package that the company’s existing V-twins can’t hope to achieve. With a capacity of around 800cc, the engine should be on course to make around 90bhp. It’s also going to be light, helping give the bikes it’s fitted to a useful power-to-weight ratio.

With the 790 Adventure, KTM’s clear target is Honda’s Africa Twin, a model that shares similar performance and the same engine layout.

It’s abundantly clear from the prototype pictured here that this is no soft-roader with adventure bike styling and no abilities to back it up. KTM’s whole background is in off-road bikes, so we can expect this to be a machine that really performs when the going gets tough.

A 21-inch front wheel and 18-inch rear put it in the market for serious mud-plugging tyres, and should provide the sort of geometry that a motocross or enduro bike would get.

The frame is KTM’s usual steel trellis, with the firm’s trademark cast aluminium swingarm at the back, complete with signature visible bracing. As usual, the firm’s subsidiary WP provides the suspension, while Brembo makes the radial brakes.

The styling seen here may be far from finished, but it’s apparent there are twin fuel tanks, or at least twin fillers, which will give the bike a distinct Paris Dakar rally-raid look. Again, the Africa Twin is the closest parallel in terms of currently-available bikes.While things like BMW’s F800 GS might be similar on paper, the KTM is clearly a much more focussed off-road proposition than the mild-mannered Bavarian.

It does raise a question, though, over how far the booming adventure bike market can be taken. Manufacturers need to learn lessons from the sports bike boom of the 90s and early 2000s, which saw supersports machines and superbikes get ever more track-focussed, losing some of their all-round ability. While the hardcore rally-raid looks of the KTM are appealing, it will need to offer a level of day-to-day usability as well.

Fortunately, there’s a hint that KTM appreciates that – the inclusion of a centre stand on this prototype shows that the firm isn’t throwing out all thoughts of practicality in the pursuit of off-road chops, rugged looks and low weight.

Prototypes have been spotted using both hard-core off-road tyres and more asphalt-suitable kit, as well as in versions with and without the screen seen on this bike. In typical KTM style, the chances are that the firm will offer at least two different trim levels for the 790 Adventure – there will at least be an ‘R’ version to sit alongside the base model – and several options to skew the bikes towards more of a road or off-road focus depending on the buyer’s need. 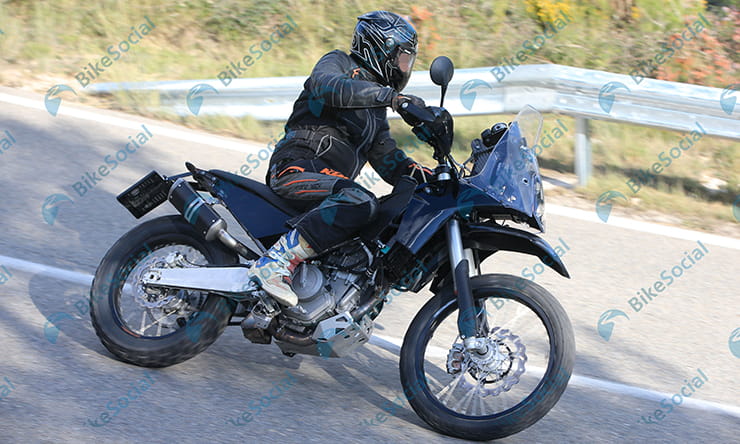 A smaller single-cylinder Adventure model, based around the firm’s 390 Duke engine, is also under development to provide an entry-level proposition in the firm’s Adventure range. There’s no question that small-capacity adventure machines are a growing trend, with Suzuki’s V-Strom 250, Kawasaki’s Versys-X 300 and BMW’s G310 GS all being launched recently. And given KTM’s close association with that part of the market, and the fact it already has a competitive small-sized engine to use, it makes sense to add just such a model to its range.

It’s not clear if the bike shown here is a prototype for the planned 390 Adventure or a completely new model. While it looks about right, size-wise, to be a 390, the engine appears to share no visible parts with the existing 390 Duke motor or any other engine in KTM’s current line. That means we can’t be sure of its size.

The chassis is also new, with what appears to be a handmade swingarm and a near-horizontal rear shock placement, hidden by the rider’s right leg in this image. The nose fairing appears to be from the current 450 Rally model, including the carbon-fibre mounting pod for a rally GPS and pace notes. Other bodywork is very temporary stuff made of flat sheets of plastic zip-tied to the frame.