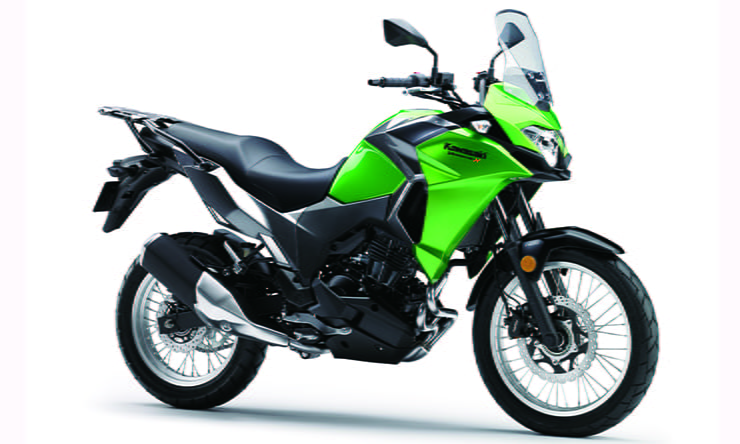 Continuing the growing trend for A2 licence friendly, 300cc machines, Kawasaki is launching a smaller version of it’s Versys sports tourer for 2017, powered by the 296cc engine from the Z300.

Hot on the heels of Suzuki’s V-Strom 250 and the BMW G310GS, the Kawasaki Versys-X 300 promises to appeal to a wide range of riders, from commuters looking for an economical daily ride to tourers looking for a lighter and more manageable machine than the big capacity behemoths on the market.

Kawasaki’s parallel-twin unit has been tuned for strong low and mid range performance and features fine atomizing injectors and twin throttle valves to maximize combustion efficiency and deliver what Kawasaki claim will be strong fuel economy.

The Versys-X 300 uses a newly designed steel backbone frame that utilizes the engine as a stressed member. Long travel 41mm forks and a 19” front wheel gives the mini Versys a real adventure bike look and feel. Despite the small capacity engine and relatively low seat, the Versys-X 300 gives the impression of a much bigger machine and, despite being a road biased machine, the wire wheels, long suspension and low power should make the new Kawasaki capable of tackling fire roads and gentle green lanes.

Kawasaki is claiming almost 250 miles between fill-ups and has confirmed that there will be a comprehensive range of accessories, with two dealer fitted accessory ‘packs’ being available at launch. The ‘Urban Pack’ boasts hand guards, tank pad, centre stand and top box, while the ‘Adventure Pack’ also has the tank pad and centre stand, but adds a pair of panniers and a tubular engine protector guard.

We’ve no word on prices or availability yet but will bring you the latest news as soon as we get it.