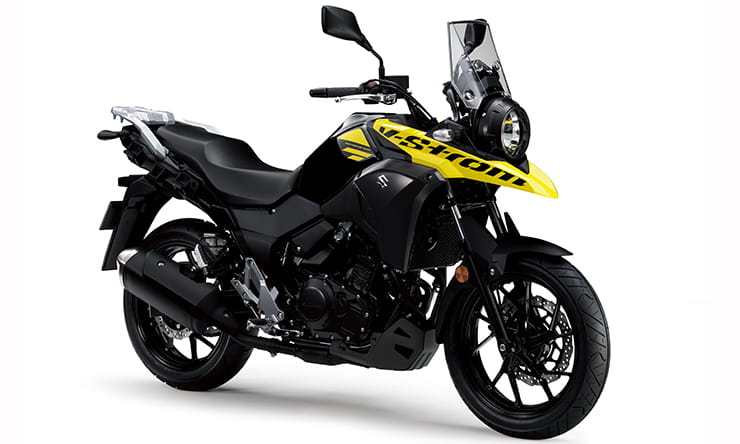 Suzuki’s focus on increasing its offerings in the small capacity sectors sees the Japanese manufacturer introduce the practical looking V-Strom 250 to its range.

Despite the name, the new ‘Strom is powered by the Inazuma 248cc parallel-twin, also shared with the faired new GSX250R, rather than the V-twin employed on the bigger V-Strom 650 and 1000.

With the upright riding position and adventure bike styling, the V-Strom 250 looks like it could be pretty handy daily commuter – especially as the 17 litre fuel tank gives a claimed range of over 300 miles.

Suzuki can’t say when the V-Strom 250 will be on sale, or how much it will cost, but a pre-production bike was unveiled at the international EICMA show in Milan today.

Despite their very different looks, the V-Strom 250 shares much of DNA with the sportier GSX. The 25bhp motor carries the same tune on both bikes, being ‘optimised for low- to mid- range torque’ while the neat reverse-lit LCD instrument panel and IRC-shod 17” 10-spoke alloy wheels all appear to be shared between the two new models.

Where the V-Strom does differ is in its presence, which belies the 250cc capacity. The front beak design gives the baby ‘Strom a big bike feel, while touches such as the adventure-style windscreen, aluminium rear rack (with 8.5kg capacity) and a 12v power outlet give the V-Strom 250 an element of practicality that usually only comes with bigger and more expensive bikes.

Other neat features include smart LED tail lights, a Bosch-developed ABS system and a range of colours that include black, red and a two-tone black and yellow combo. Expect to see a further range of accessories, including panniers and a top box designed especially for the V-Strom 250.

Suzuki claims that the V-Strom 250 is aimed at new riders and those returning to the fold after a long absence.

Neither the bike’s weight or seat height has been confirmed yet but if they prove newbie friendly, and the prices are right, Suzuki could well have a hit on their hands with this one.