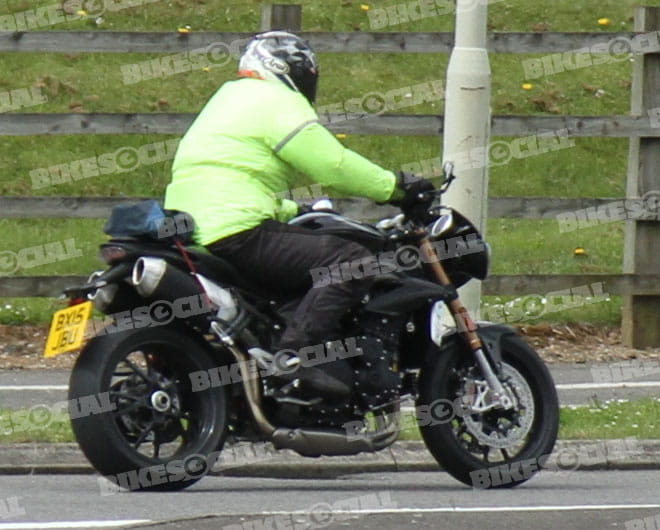 Both bikes were seen testing last week in the UK near to Triumph’s Hinckley-based headquarters. It seems apparent that both models are in the final stages of development as test riders are now putting miles on the clocks for reliability purposes. A fact which is backed by no datalogging equipment being attached to the bike nor any camouflaged parts as is common on early test mules.

The Speed Triple is a brand new prototype, 21 years after the model was introduced in 1994. The pipes are new and in this image they appear to be production-ready. The rest of the bodywork is new as are the headlights and although unfortunately our snapper only got it from the side/back the lights it is apparent that they are nearly round now and have no chrome rims.

Engine-wise the registration plate confirms the bike is still a 1050cc so we can forget earlier speculation of an increase to 1100cc but we have heard whisperings that plenty of tweaking has been required leading to emission compliance and a slight increase on power up to 135-140bhp.

Other rider-friendly upgrades on the new model look certain to include a new electronics package with traction control as well as keyless ignition and integrated Bluetooth.

As is standard procedure the official response to such speculation from manufacturers remains firm. Triumph stated: “We don’t comment on future model development.”

Speculation has surfaced suggesting the Speed Triple could be unveiled at TriDays - the week-long, annual Triumph festival in Austria at the end of June.

However, Bike Social understands that no new models will be seen ahead of the annual exhibitions in Italy and at the NEC towards the end of the year.

It certainly looks like a busy model year for Triumph with a brand new engine platform looking increasingly likely to be launched in all-new versions of the Speed Twin and Bonneville. The liquid-cooled 1100cc parallel twin replaces the old air-cooled 1050cc platform which has existed since 2000 yet won’t meet future emission regulations. 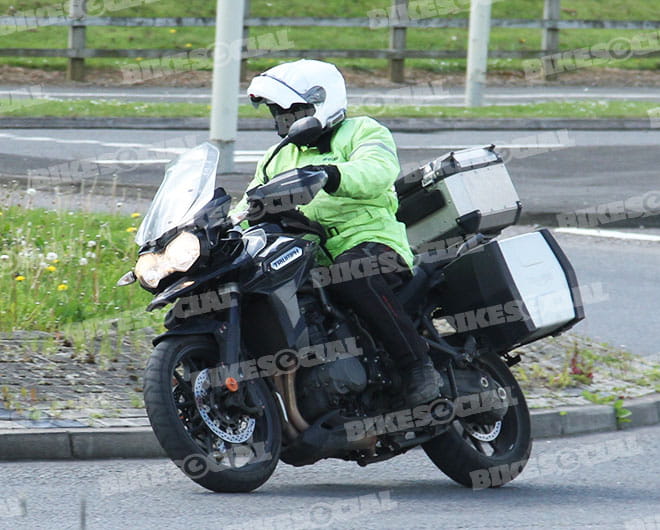 Meanwhile, the other new Triumph on the horizon and set for 2016 is a face-lifted and upgraded Explorer which we first spied back in January.

Introduced in 2012, the Explorer has been constantly compared to BMW’s all-conquering R1200GS. When the 2016 version was spotted earlier this year it was being ridden alongside a BMW with ESA package (Electronic Suspension Adjustment) thus promoting the fact that the new Triumph will also feature a similar system to that currently used on the Trophy, known as TES (Triumph Electronic Suspension) with its three options of Comfort, Normal and Sport.

Other upgrades will include cosmetic tweaks most notably on the nose, front fairing, belly pan, the position and style of the indicators and design of the adjustable screen. Brakes will be upgraded and we also expect further changes to the side panels.

For possible engine upgrades we look to the Triumph Tiger 800 range, heavily upgraded for 2015. Engine remapping has been key to economy and emission improvements with a claimed increased MPG of more than 15%. We can expect to see more engine refinements in the new Explorer.