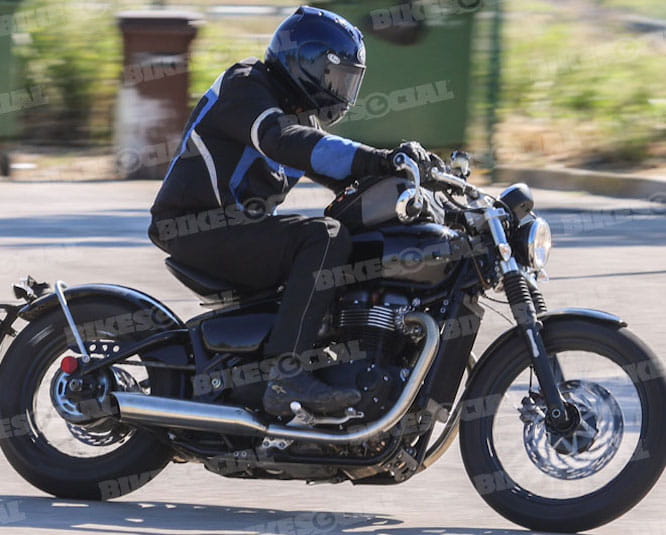 These are the very first photos of a Triumph test rider putting a brand new Bobber-style bike equipped with the 2016 water-cooled, 1100cc engine through its paces at the Hinckley firm’s Spanish test base on the outskirts of Barcelona.

The traditional solo-seat unit, straight bars and under-slung rear-view mirrors are conducive of the bobber-style that is doing the rounds among the custom-build houses recently. Despite the traces of a trendier heritage, this Triumph has all the tell-tale signs of becoming a production motorcycle in the near very future although according to Bike Social’s sources the Bobber will not be appearing in dealerships until 2017. As for an official reaction, as is the case with all new non-confirmed models, Triumph remain tight-lipped.

Clues that the Bobber show this bike is production-ready include the rear mudguard complete with registration plate holder also housing the necessary lights and indicators.

Styling wise, the apparent straight-through twin exhausts are cleverly disguised because if you take a closer look below the rear brake lever and you’ll notice they divert into a catalytic converter and back out into the silencer. 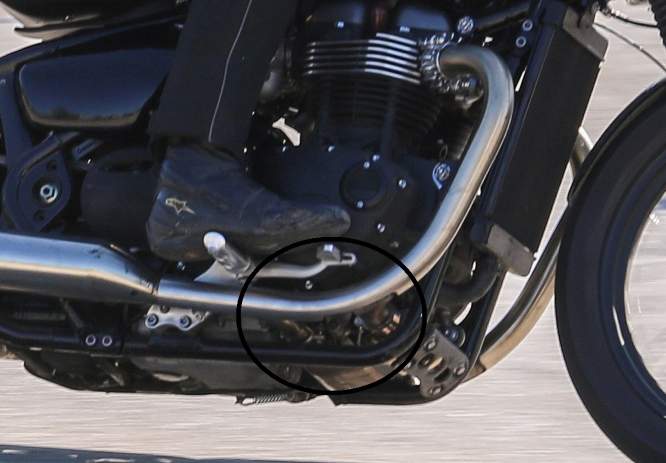 When we first revealed Triumph’s new parallel-twin and liquid-cooled engine platform back in December one particularly noticeable part was the retention of the fins on the engine block designed to replicate air-cooling. It seems as though all models using this platform will offer a nod to Triumph’s heritage.

Back in November 2014, Triumph launched an in-house Custom Build-off with two teams given a Bonneville each, one was to design a Bobber while the other was asked to create a Scrambler. The resulting to machines were displayed at the Milan Motorcycle Show before the public were asked to vote for their favourite. The winner was then announced at Motorcycle Live at the NEC. The Bobber won which has led to speculation that the resulting machine was always going to be the one

Triumph are keeping our spy snappers in business this year with a wrath of new models. 2016 looks set to be a big year for the firm with a new range of Bonneville’s, a redesigned Speed Triple, a new engine for the Tiger Sport plus updates for the Explorer. The new 1100cc platform replaces the out-going air-cooled version which has been around since 2000 which won’t meet future emissions regulations. ABS is an obvious addition considering it will be mandatory on all over-125cc motorcycles from 1st January 2016 onwards.