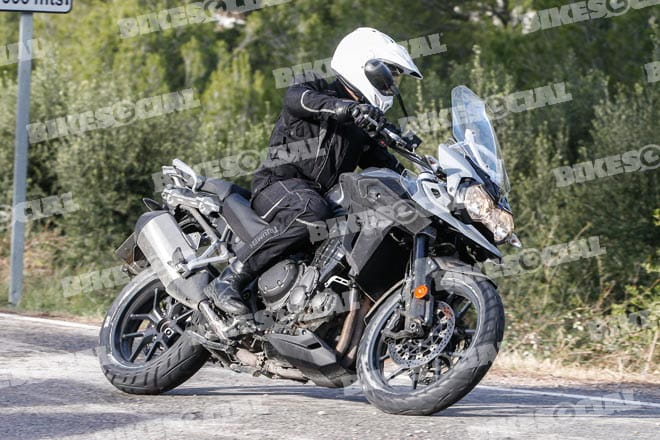 Triumph has been spotted in Spain testing a face-lifted version of their big adventure bike, the Tiger Explorer, which is thought to include electronically adjustable suspension.

The massively impressive Tiger Explorer was introduced in 2012 and was immediately hailed as a proper rival to the BMW R1200GS.

Endorsed by GlobeBusters for their world-wide cross-country tours, the heavyweight adventure bike from Triumph is now three years old and it looks like the Hinckley firm are planning a facelift model for next year.

In Spain, near the British firms’ test base on the outskirts of Barcelona, a very familiar looking Triumph Explorer was spotted testing this week. From the outside, the bike has a few cosmetic tweaks most notably on the front fairing, belly pan, the position and style of the indicators and design of the adjustable screen.

However, look a little closer and we see Brembo brakes instead of the current Nissin versions, mounted to the new forks. Adding fuel to the suspension-refinement fire, our man in Spain also spotted a BMW R1200GS complete with ESA (Electronic Suspension Adjustment) running alongside the prototype Explorer. This observation draws comparisons to the similar system available on Triumph’s Trophy, known as TES (Triumph Electronic Suspension) with its three options of Comfort, Normal and Sport.

Our man in Spain confirmed his observations, he said: "They did suspension testing when I shot the pics and compared the prototype to an R 1200 GS with ESA, so I suspect the updated Tiger Explorer will get something similar."

As seen with the 2015 Tiger 800 model upgrade, engine remapping has been a key to economy and emission improvements. Triumph claim an increase of 10mpg up to 65mpg from the second generation 3-cylinder, 800cc engine. This has been achieved by new components such as fuel injectors, air box and catalyst. We expect to see similar upgrades to the 3-cylinder 1215cc Explorer engine too.

Further upgrades from the 2015 Tiger 800 range are also likely to make their way across to the new Explorer such as an advanced traction control system and lighter-weight wheels.

Externally, many of the components are the same as the current Explorer model. So, given that our photographs show a near-production ready bike we can safely assume that once the suspension calibration is complete the Explorer will be officially introduced later this year as a 2016 model.

Is it enough to consider upgrading?