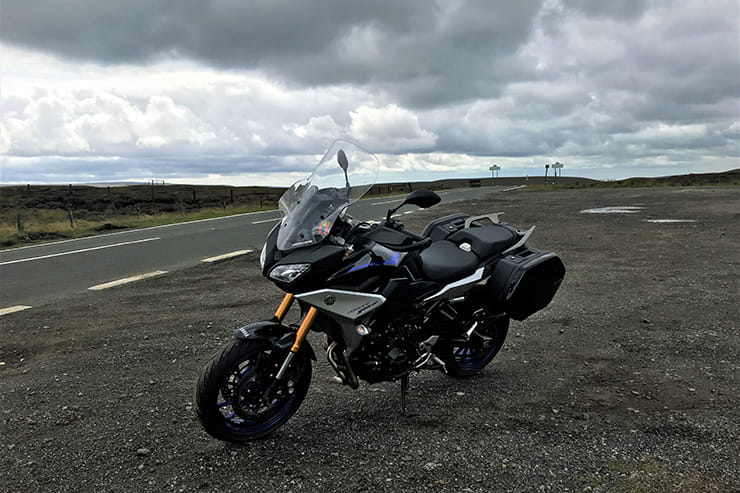 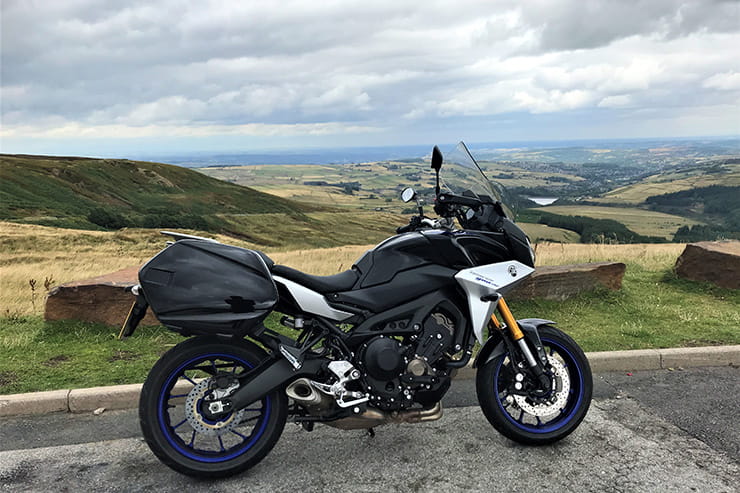 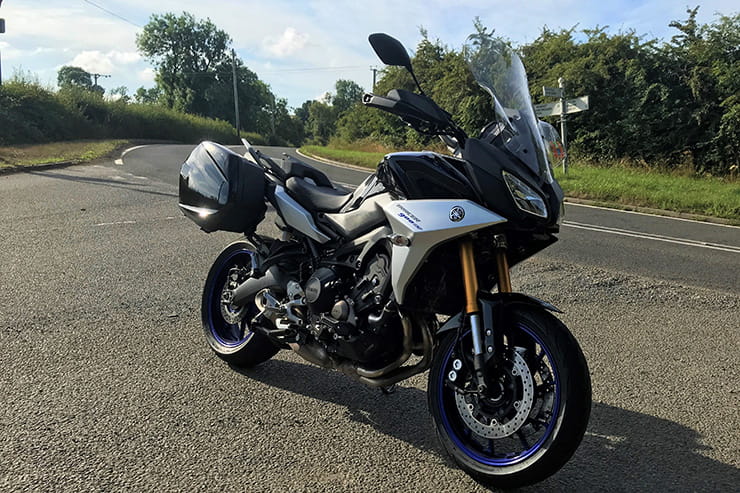 Four hundred and eleven miles in a day shouldn’t be this easy. In among the wide-eyed engine performance, easy handling and memorable moments, it’s the lack of any kind of ache or pain in the back or the backside (or the back of my backside) that matters most. And that means every single mile, right to the end of the day has been as enjoyable as the previous four hundred and ten.

It started with an office conversation about how the increased performance of adventure bikes and sports tourers have made sports bikes unnecessary. As more and more roads become harder to ride without scanning for cameras, or dash-cam vigilantes or drivers too busy counting their ‘likes’, how do we respond as riders? What will biking become?

Hedonism is gone. Ride like you used to and it’s only a matter of time…

It’s a challenge to our evolution as riders. No longer (if we ever did) being able to do the crazy speeding thing is no big deal. And deep down, you’ll admit that too. Biking without the juvenile macho bollarx is a better place.

The perfect motorcycle for 21st century UK roads has punchy torque, easy midrange and sharp response, with enough revs to hang onto a gear for long, quickening corners. It has a short, flickable chassis and enough handling and suspension adjustment to do solo blasting, two-up touring and slick commuting too. It should be manageable with a low…ish seat and light weight. And practical too with easy routine maintenance, good fuel economy and effective daily-use luggage. And it has to be good value because as prices bust the £10k barrier, chances are, we can only afford one. 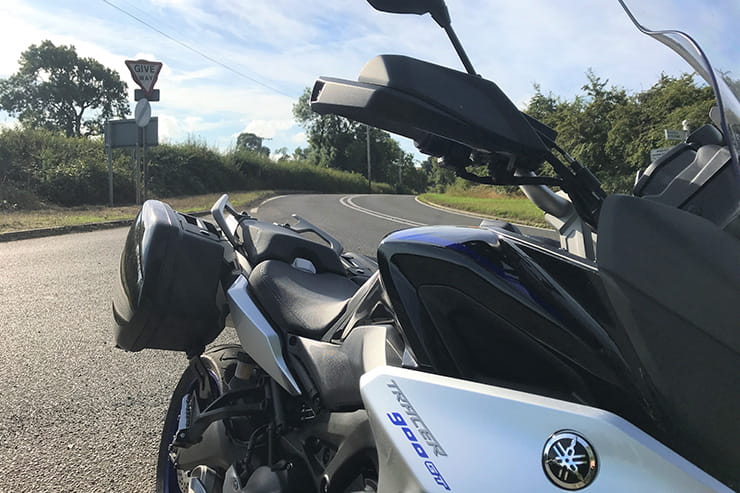 Enormous adventure bikes are too compromised on road, too tall, too heavy and too clumsy in town or in corners. Sports tourers are too fat, still-too sporty and focussed on a top-speed culture that no longer exists. And the super nakeds with their mono-wheeling erection fantasies are surely just compensating for something?

This bike could just be the answer. Yamaha’s Tracer GT 900 has all the fizz of the bonkers MT-09, with effective bodywork for high-speed comfort, a longer swing-arm for added stability with a pillion and a couple of very comfy seats. It also has a posh TFT dash, all the expected electronic rider aids, heated grips, luggage and a centrestand and like all the MT range represents good value (in today’s market, at least) at a touch over £10,500.

Ride it 100 miles and you think ‘modern-day TDM900’ because that’s how the riding position and ‘long-travel-for-a-road-bike’ suspension make you feel. Ride it 400 miles and that switches to ‘modern day Fazer 1000’. It’s a good comparison – the Fazer was a no-nonsense, comfort-first motorcycle with deceptively sporty performance and a very broad appeal (once they’d sorted the pricing out). The Tracer takes that idea and adds a few flash-harry 21st century baubles too.

What I really love though is that, despite being essentially a half-faired MT-09 with a longer swing-arm, the Tracer GT feels like a built-for-purpose all-rounder, designed to be my perfect do-it-all bike. 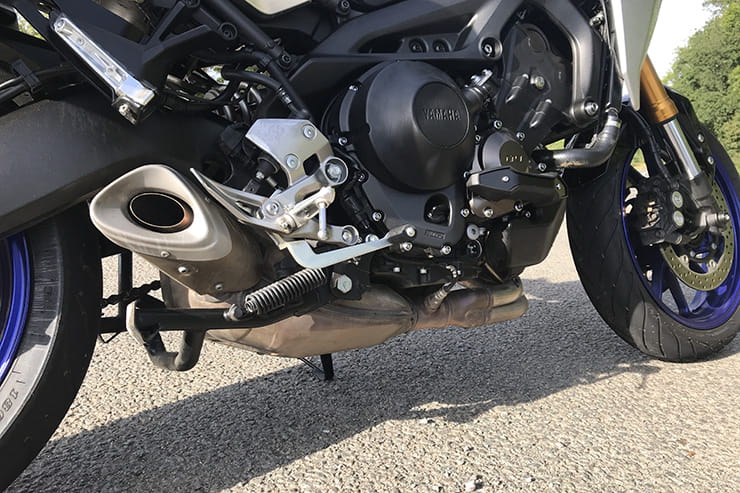 Three cylinders, sporting intent, but completely different in character to Triumph’s take on a triple.

The engine is slightly less sharp than the MT-09. All three engine maps are usable, with none of the MT’s jerkiness in A-mode (at least that’s how it feels…could be that the maps are exactly the same but the longer swing arm has some kind of ‘jerk management’ function).

STD mode gives predictable and consistent strong acceleration, wet or dry and that’s where I left it most of the time. The gearchange needs a firm foot. Even with the standard-issue quickshifter (upchanges only) its best described as ‘effective’ rather than enjoyable.

For a triple, the MT motor is surprisingly smooth and refined – a long way from Triumph’s raucous, gutteral, almost-hollow feeling. This motor is more like an inline-four with close-to-the-edge cam timing and fuelling.

It picks up power quickly, potters through town without fuss and when you need to it’ll chase down bigger bikes illuminating all of the rev counter like a sci-fi space explosion. You can programme the tacho to change colour at peak torque (or anywhere else you fancy) and flash ‘danger’ at the redline too. 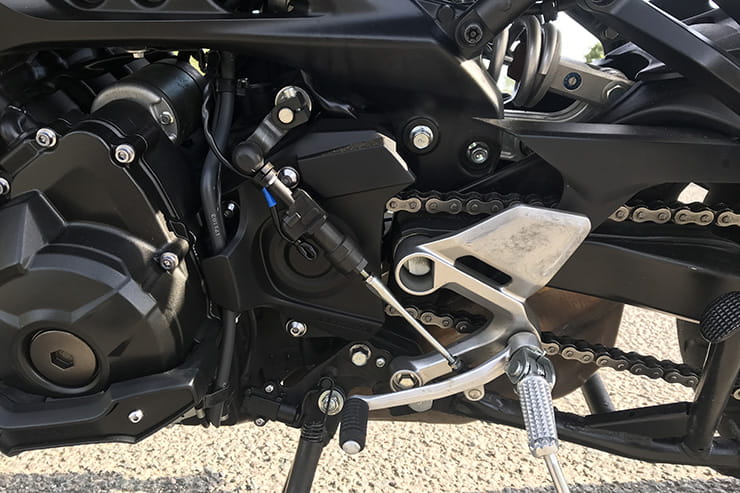 I can’t do wheelies, but on occasion the front feels like its lifting as you power out of corners and the Tracer seems to pivot around the back wheel in the last few feet of a turn.

The handling isn’t sporty like a knife-edge race replica or numb like a softly sprung adventure bike. It turns slower than the standard MT (as would you if someone added two and a half inches to your wheelbase) and feels like the well damped (and multi-adjustable) suspension is doing a great job making up for the not-quite-good-enough performance of the standard Dunlop D222 tyres. If I were buying a Tracer I’d ask the dealer to swap them for something more appropriate (Dunlop’s own Roadsmart would be perfect) at the first service. Otherwise your first summer of ownership will be memorable for your Tracer not being as confident (especially in the wet) as you expected it to be.

Our bike had Yamaha’s optional touring screen fitted which, even on the lowest setting (adjustment is a one-hand on-the-move operation) makes for quiet, comfortable cruising. At high speeds there is a touch of instability and the bars oscillate briefly before settling down. The first time it’s odd, but a few miles down the line you won’t even notice it. I kept the seat in the lower of its two positions and, even as a six-footer it was comfortable without cramping knees or putting too much weight on my backside or lower back. The footrests feel rear set - I keep putting my left foot on the engine casing - but the positioning is perfect once on the move. I might have said this before, but the Tracer really is a superb riding position. 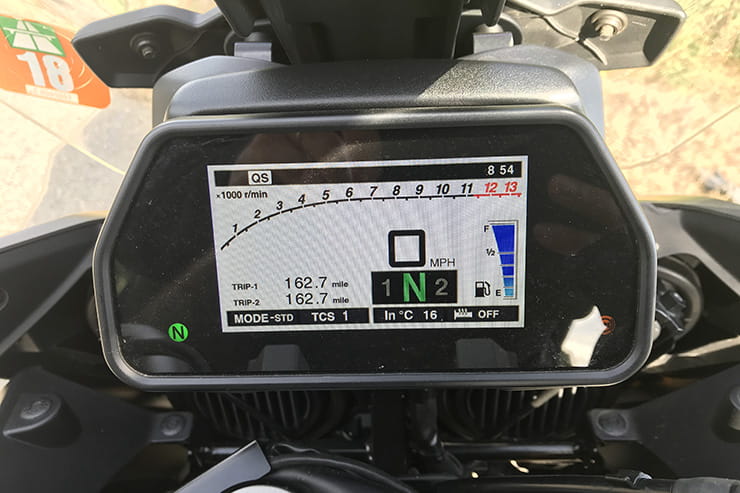 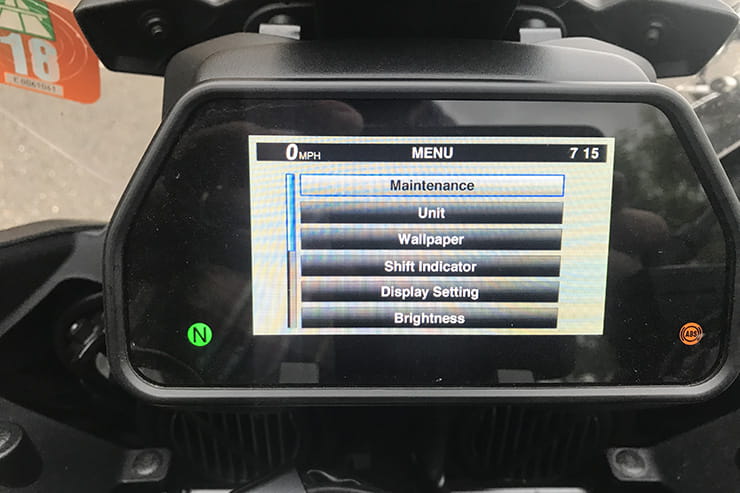 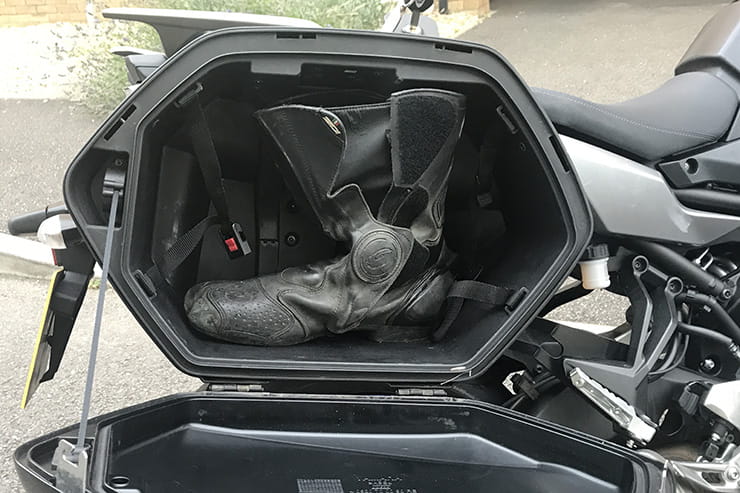 TFT display is standard on the GT model, as are panniers. Stinky boots are extra

The amount of options and programmability in the instruments alone, never mind the suspension is mind-boggling. The ignition key is hidden by the handlebars, making it hard to locate with gloves on. Simple things like zeroing trip meters via the menus are harder than they should be. Geeky riders (now there’s a road movie) can set it up exactly how they like it, the rest of us will get frustrated. Either way, the actual bike is good enough that it won’t matter. Menu programming isn’t as intuitive as some and you can imagine the awkward silence in Yamaha R&D when the team responsible for the RHS switchgear unveiled the slick, thumbwheel-driven minimalist unit, and the LHS team wheeled their enormous carbuncle of an oversized Ferrero Rocher tribute into the room. The LHS switches are ok, but I’d have preferred the traction control to be in the thumbwheel and the heated grips to be a simple bar switch instead of being buried in the menus. And the indicator switch is a few mm too far right and low down so you have to think about it every time. 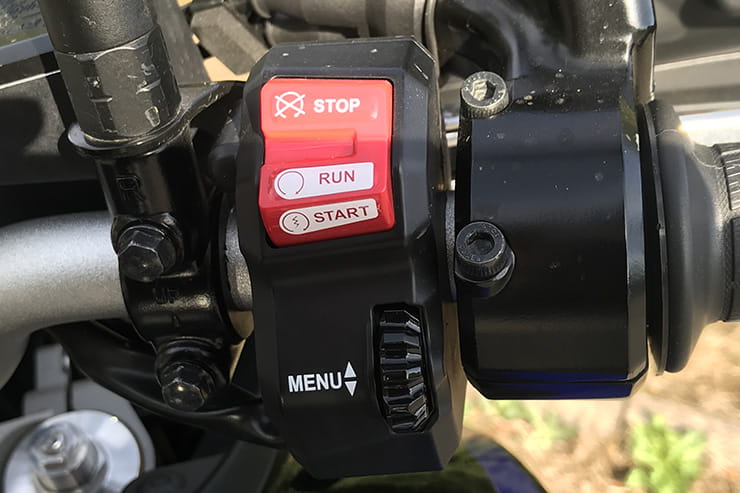 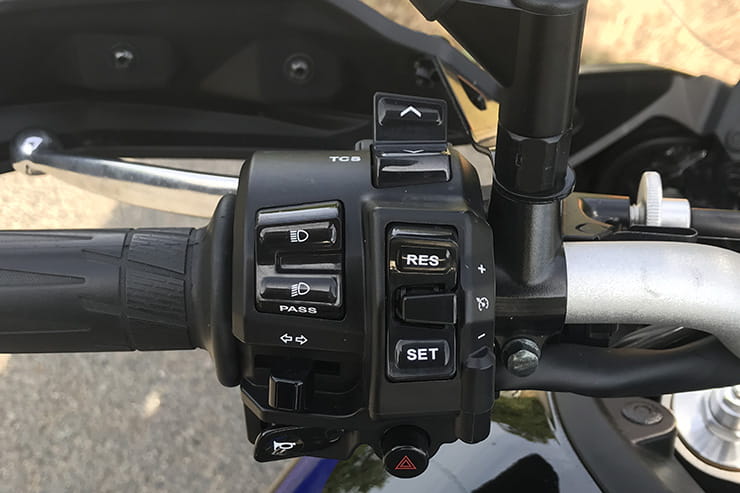 Left hand switchgear takes a bit of familiarisation, right side is slick and easy to use

It’s been six years since I rode in Derbyshire and the council has been busy turning all the best roads into 50mph limits. I’m ok with that – there are no actual policemen left to enforce it and not that many cameras either. The only downside is that getting nicked at 70mph is a much bigger deal in a 50-limit.

The A537 Cat and Fiddle between Buxton and Macclesfield is legendary for all the wrong reasons. Britain’s most dangerous road has been neutered by 50mph average speed cameras. The truth is that from start to finish you’d need to be called Dunlop or McGuinness to actually average more than 50mph along the the full length of the pass. The Cat and Fiddle is scenic, challenging and very satisfying to get right, but apart from a couple of straightish bits near the pub, you’d be as quick on a middleweight as a superbike.

And clearly, none of us are here today because we have a pressing appointment in Macclesfield - we are here for some fun, so if it takes a little longer because of the cameras, we just need a little lateral thinking. 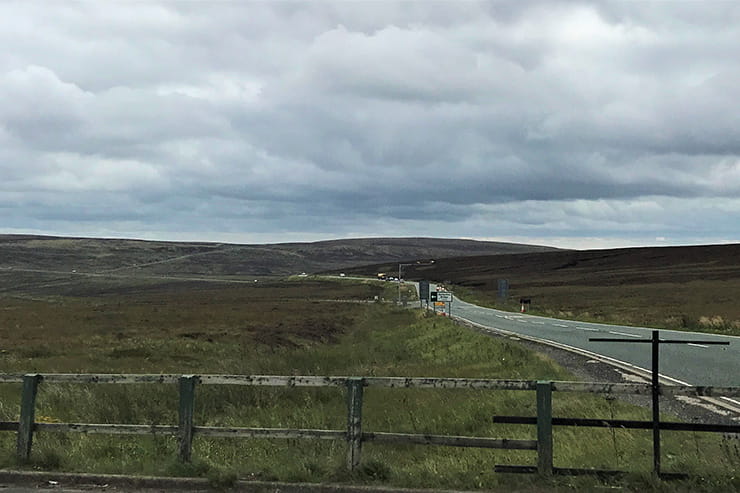 My plan is to turn it into a series of sections using the cameras as start and finish posts, like trials riding with more trucks and less talent required. Ride between the cameras, turn around just before the flash, ride back to the previous one, turn round and do it again. Then move on to the next section. This way I get to spend an hour or so gradually working my way from Buxton to Macclesfield and the camera operators in police HQ record footage of a fat bloke on a sports tourer averaging about 3mph between cameras.

It’s an enjoyable way to ride (and learn) this challenging piece of tarmac, I can’t recommend it highly enough.

Crossing the border into Yorkshire on the Woodhead Pass the speed limits increase back to 60mph (because Yorkshire is historically ‘ten-better’ than anywhere else) and the wonderful road up to Holme Moss is a warm welcome home. The scenery is stunning, the road is fast, but challenging and the view from the top is dark, but definitely not satanic. The Tracer snarls, flicks, slips and almost wheelies out of every corner. It feels loose, but confident, light but planted and confident too. The ever-present wind up here is like a ram-air system, turning Oxygen into gravy for the soul. 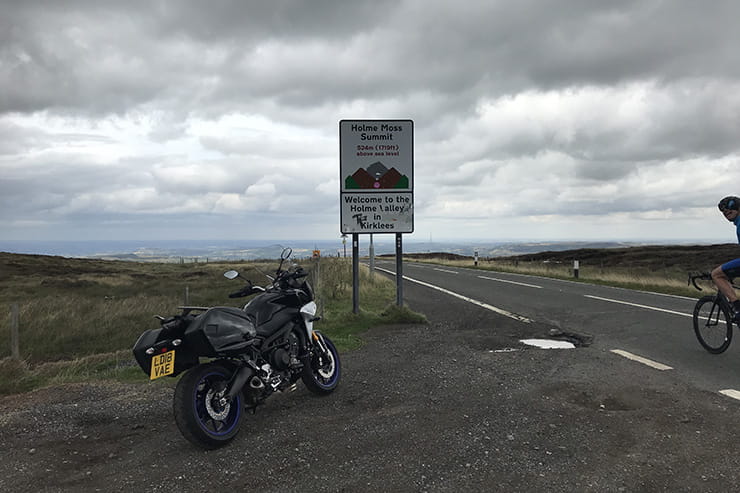 Holme Moss summit – even the cyclists are smiling

The descent into Holmfirth is as clenchy, erratic and challenging as ever. I never got it right when I lived here and today is no exception. Quick cup of tea, one (maybe two) small cakes and it’s time to head home - the long way via Barnsley, Sheffield, Worksop and Lincolnshire. In rush hour towns the Tracer filters like a scooter, on the fast A-roads, it glides past traffic without fuss and on the B1225 it scratches like a sports bike. Fuel consumption varies from 41-53mpg depending on whether the road name starts with an ‘A’ or a ‘B’ and the following day I’m still excited enough to take the long way back to Yamaha’s HQ to return it.

In a world of hyperbole and must-have superlatives it’s an easy bike to overlook. As a spiritual successor to the Fazer 1000 or VFR750, the Tracer GT is hard to beat. All-rounders definitely don’t have to be boring. 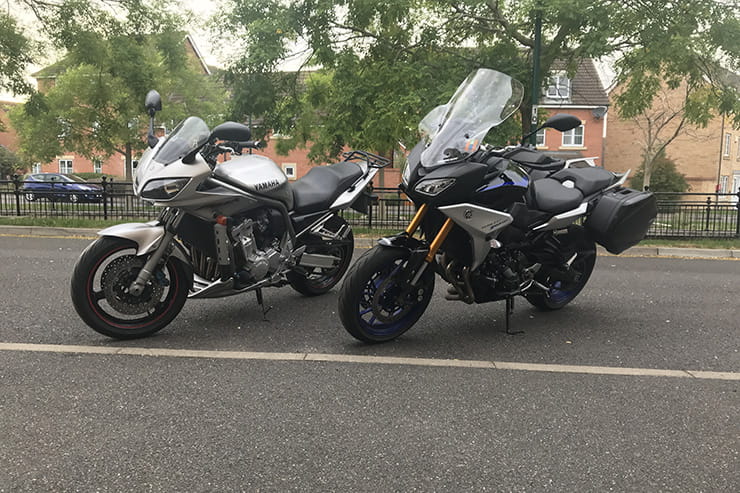 Tracer GT meets its long-lost dad. Mother was a TDM900

Three things we love about the Yamaha Tracer 900GT