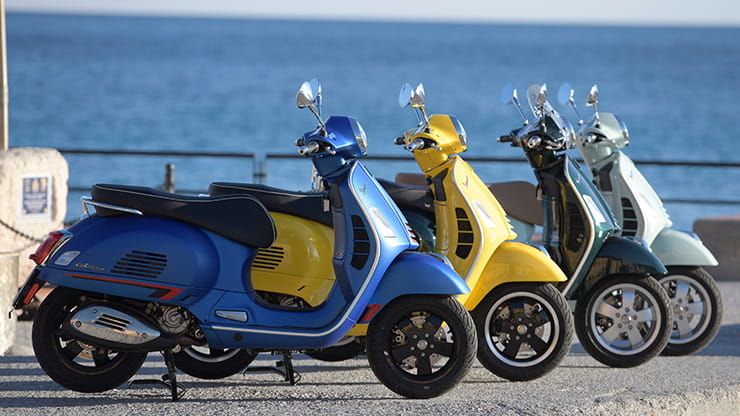 The 2019 Vespa GTS 300 high power engine (hpe) model is only the second major update of the GTS in almost ten years. It’s a bike with a massive following, especially in Europe (and the USA apparently). For the last four years, the Vespa GTS 300 has been the second best-selling bike over 125cc in Germany – home of the mighty BMW GS. Just let that sink in for a moment, think how many great bikes, from fire-breathing superbikes, adventure bikes, tourers and cruisers this £5000 scooter is outselling. 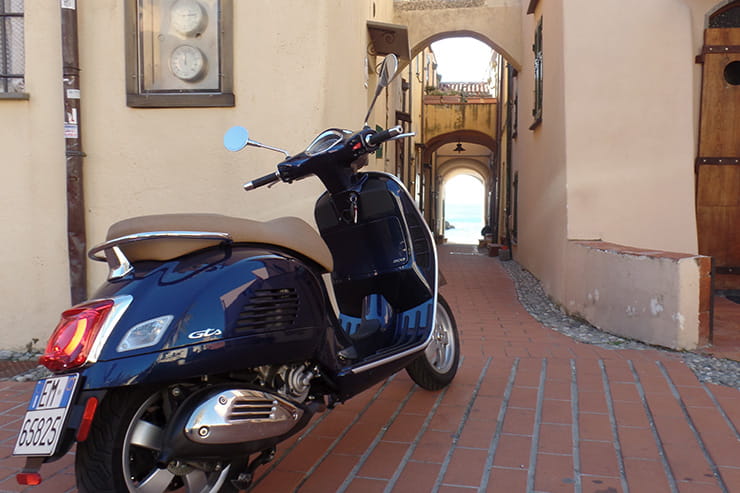 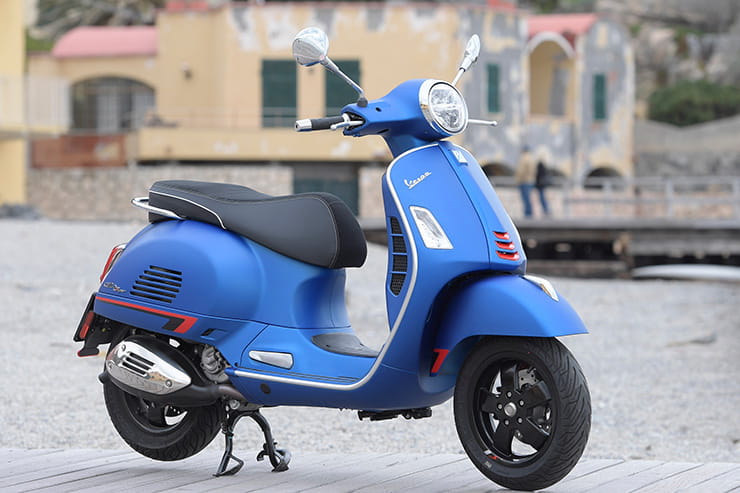 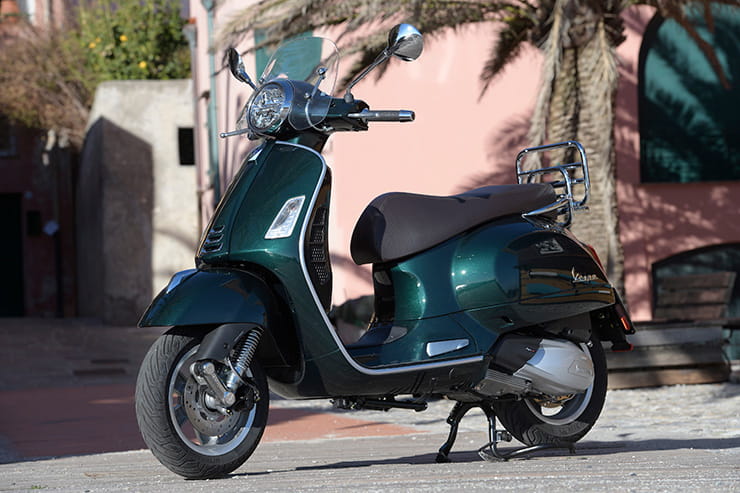 As with the current model, the new Vespa 300 GTS will be available in a range of variants, all with the new hpe engine, starting with the 'base' GTS hpe at £4899. The black-wheeled GTS hpe Super comes in at £4999, and is expected to be the UK's biggest seller. If you are riding longer distances, the Touring version has screen and luggage racks, for £5699. The range topping GTS hpe Supertech with TFT screen and phone connectivity is yet to be priced, but is likely to be a good few hundred pounds more than the Super. Once again, a series of special editions will be released, starting with the Super Notte in 'Nero Opaco' (that’s matte black to you and me) at £5199, and the retro inspired Sei Giorni at a price to be confirmed.

The choice of 300cc scooters is limited in the UK, where most scooter sales being in the sub 125cc A1 category. Vespa's rivals include Yamaha's maxi scooter X-Max and Kawasaki J300 to the sportier looking big wheeled Honda SH300i. Here's how they stack up on paper:

Vespa quotes an increase of 12% in power and 18% more torque. On the road, it's the torque increase that shines. With peak torque at 5250rpm, on the twisty coastal roads of Liguria, the GTS was always in the sweet spot. Overtaking was easy, sharp hairpin climbs were despatched with grace and the GTS showed much more performance than its stats would be suggest. While the winding nature of the test route didn't allow much high speed riding, the additional horsepower was evident in acceleration as we cleared the towns. 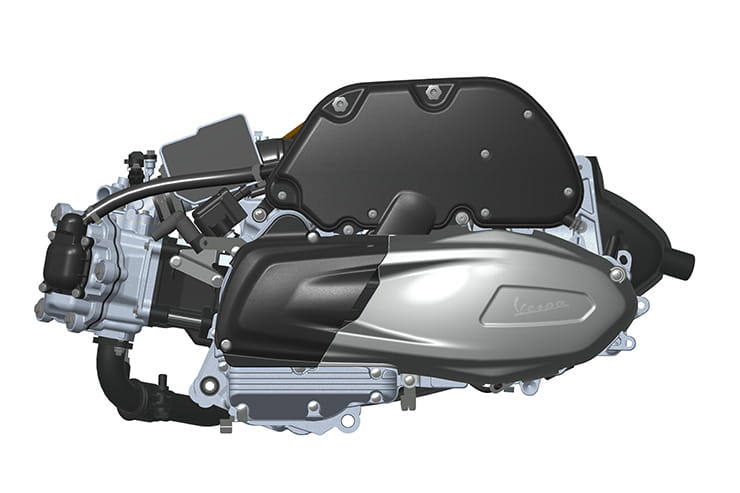 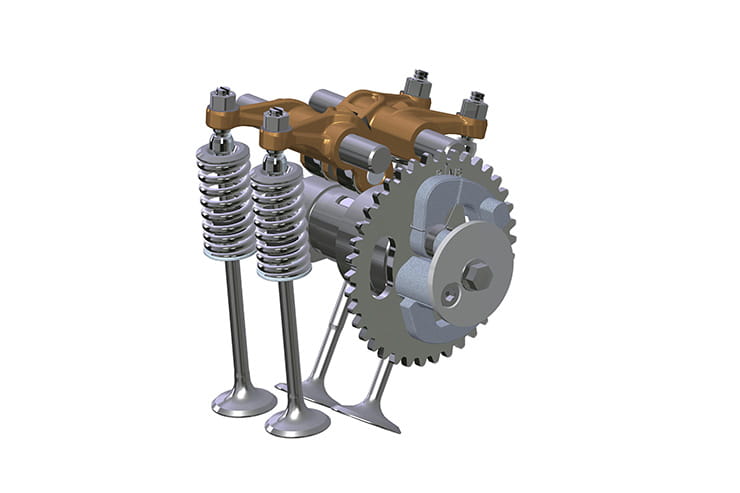 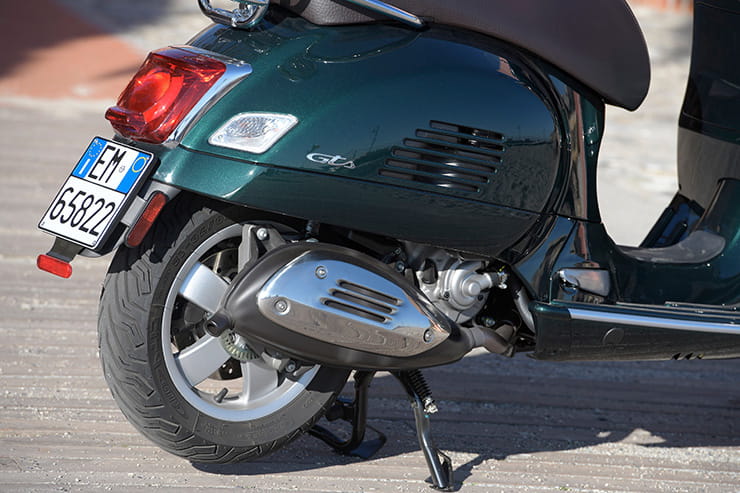 Vespa's hpe engine technology was first showcased in the three wheeled MP3 model but has been further revised in 300cc form both for the smaller MP3 and for the GTS range. The additional performance comes from evolution, not revolution. The cylinder head is an all-new design to accommodate increased diameter intake valves, a revised lift camshaft is fitted, intake ducting is tuned to increase low rev torque and a tweaked injection system and engine map, all controlled by an Euro5 compatible Magneti Marelli ECU, keep the engine running at its optimum. Even the spark plugs have been revised in the eternal quest for power. All this contributes not only to those headline-grabbing power and torque figures, but also to a major revision to the service intervals from the current 5000km to 10,000km.

To make full use of the revised engine characteristics, Vespa revised the drivetrain. The new GTS has a new belt, new geometry and new materials, as well as a revised and soundproofed cover to refine the riding experience. On the road, opinion was divided about how much quieter the whole system really was, but it was agreed that it was smooth, unobtrusive and a pleasure to use.

It's a well balanced package. Vespa described how they'd worked on the power delivery to reduce snatchiness and lurching in on-off throttle transitions. On our test ride, taking in a mix of town riding, beautiful sweeping coastal roads, and some challenging hilly hairpin climbs, the power delivery remained smooth and predictably accurate. 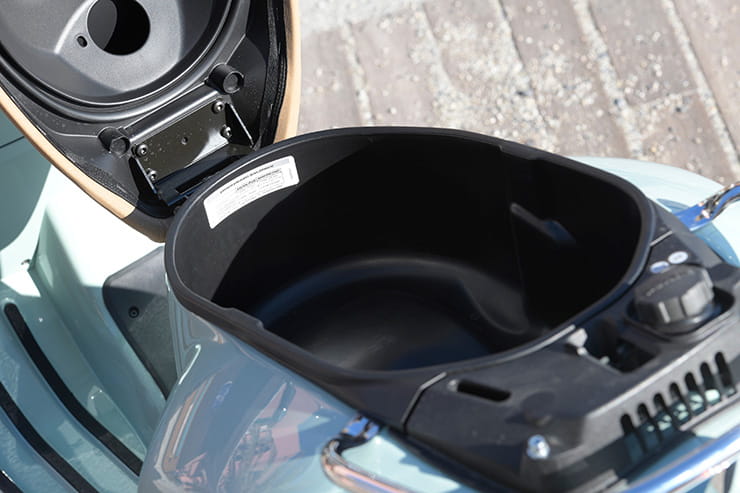 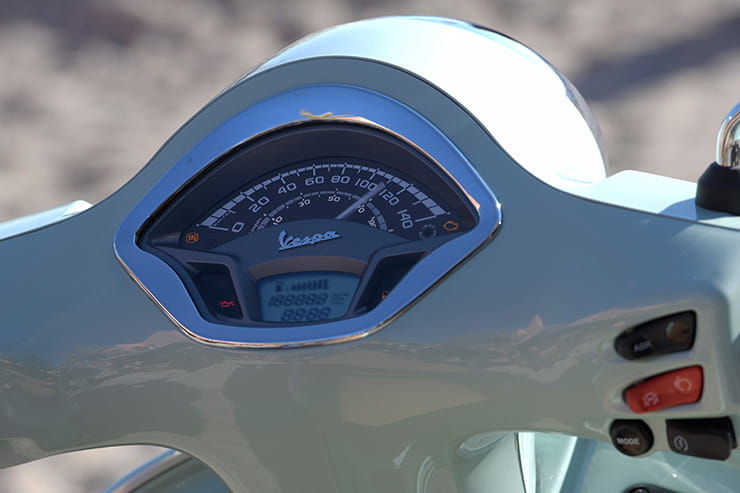 Along with the improvement to power and service intervals, a result of the engine revisions is an improvement in economy. It seems we really can have our cake and eat it. Vespa claim a World Motorcycle Test (WMTC) figure of 87.6mpg (31 km/l) and based on the group consumption we saw on test, I don’t think that every day riding will be far from this. Even among a group of heavy-handed journos, razzing up and down the twisties for over 60 miles, none of us used more than an indicated half of the 7 litre tank, giving a rough mpg figure of 78mpg. I am sure that with a smoother riding style and some prolonged medium speed runs, figures in the mid 80s would be possible.

Even with the lower figures, as seen on test, a projected range of 100-110 miles would allow a weekday return commute of 20 miles to be undertaken on less than £10 per week. 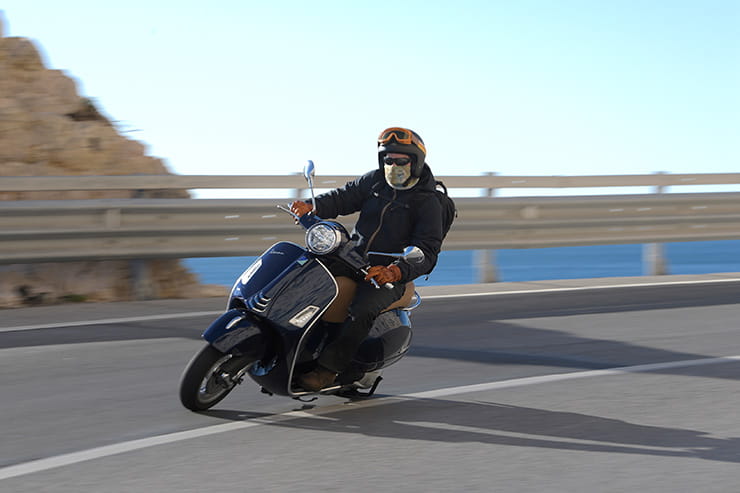 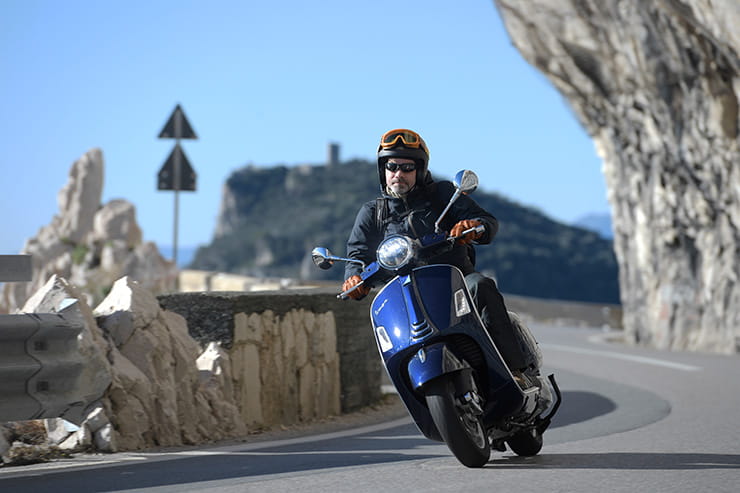 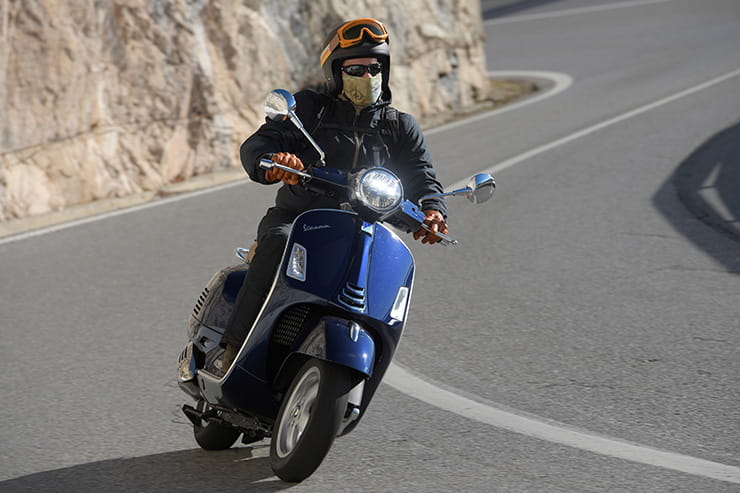 While the increases in power and torque grab the headlines there are also some changes to the suspension. At the front the Enhanced Sliding Suspension (ESS) system introduced on the previous model has been ditched because, while in tests the ESS system gave an improvement in ride, most of the user feedback didn't reflect this, and so, to keep costs down Vespa reverted to the non ESS unit. Rear suspension is largely unchanged with adjustable preload on the twin hydraulic shocks. A minor tweak that was noticed by the scootering press that attended our launch day, was the revised side stand position, which makes operation much easier and allows more ground clearance in left hand bends.

The ride quality is excellent. Pot holes, access covers, drain covers, gravel, spilled diesel and even some icy water on our route all failed to upset the GTS, even at speed. Turn in was precise to the point of being effortless and the low centre of gravity, acute steering angle and short wheelbase all combine to make a bike that is reassuring, stable and far more enjoyable than I thought possible.

At the time of writing, Vespa have not yet confirmed weight figures for the GTS, but with the slight tweaks to engine covers, offset by a reduction in fuel capacity (7 litres, down from 8.5l), we suspect that it will be on a par with the current model at around 168-170Kg. 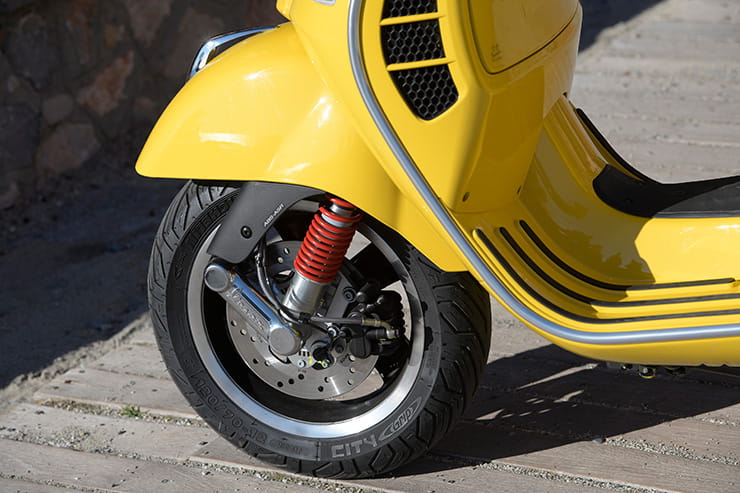 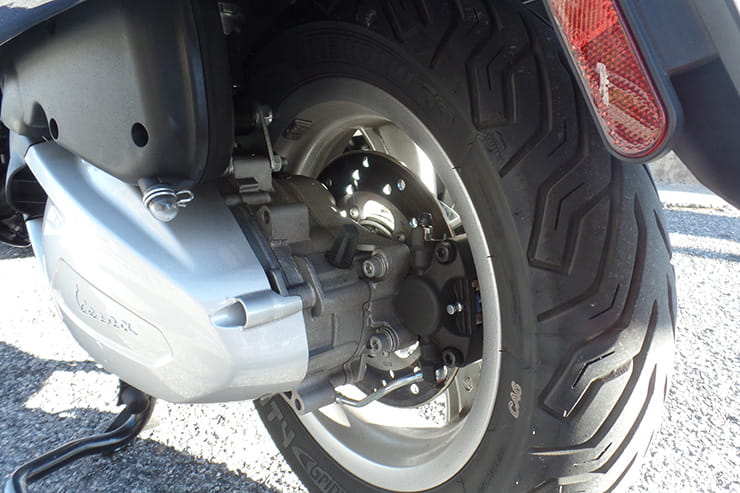 ABS is standard across the range of the 2019 GTS as on all 125cc+ bikes and adds a level of mental comfort that should you find yourself, for example, overtaking an old Fiat Panda, only to find yourself (ahem) on a tight turn outside a diesel strewn filling station, that when you do grab the brakes, you can do so with the assurance of remaining rubber side down. Braking is delivered via single 220 discs front and rear combined with un-branded (Piaggio) calipers. While others proudly show of their Brembo or Nissin units, the truth is that the brakes are more than enough for the bike giving a good firm bite when you need it, without being snatchy and unsettling. The rear ABS was easy to engage when provoked, but provided great feedback and was never intrusive. 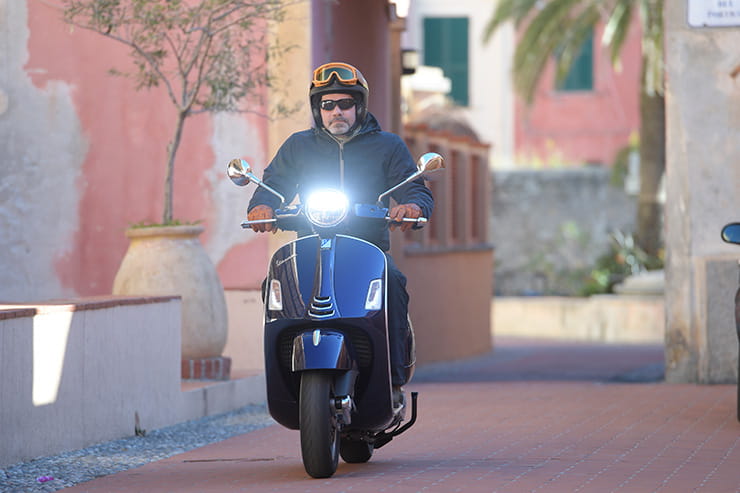 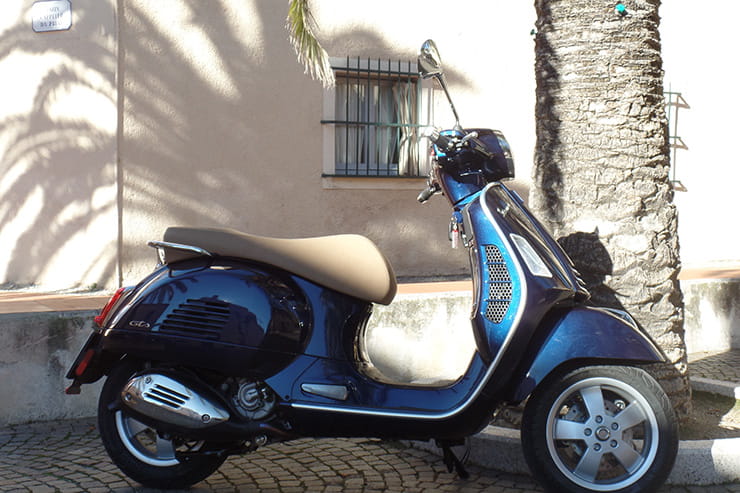 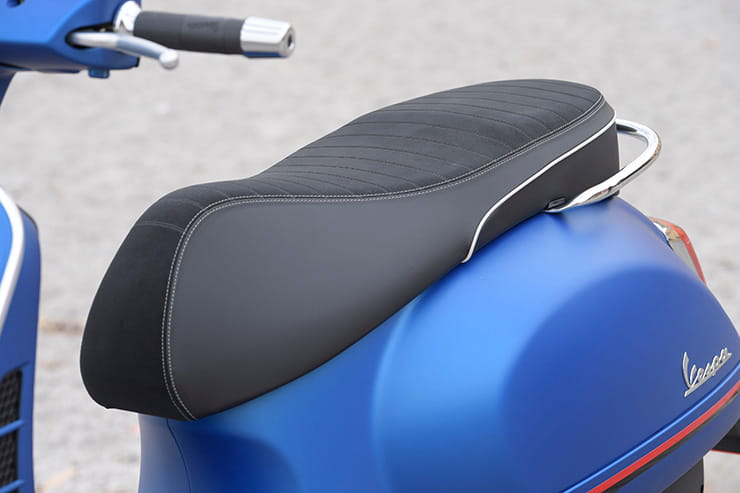 The final piece of the 2019 GTS refresh is a new more-comfortable (for rider and passenger) seat unit. After six hours riding, I had no complaints finding it supportive, without being hard, with sufficient room to shuffle about to prevent numbness on longer runs. The variation in colour and finish of the seats is mind boggling from tan leather effect to black stitched alcantara style, there is something to suit everyone, though as with many bikes, certain seats are limited to certain ranges. Underseat storage is also increased with Vespa stating that it will now accept two of their Visor 3.0 demi-jet helmets, though I struggled to fit my Shoei J.O in without some serious fiddling.

The riding position of the GTS puts the rider's head high and forward in relation to the headstock. While this is great for riding as it effectively removes all distractions from the riders cone of vision, it also puts you face first into the wind (so much so, that my goggles were blown off my helmet!). Unless you are planning some prolonged high speed rides, my preference would be to stay screenless (it's an option on all but the Touring model) and enjoy the panoramic riding position to its fullest. 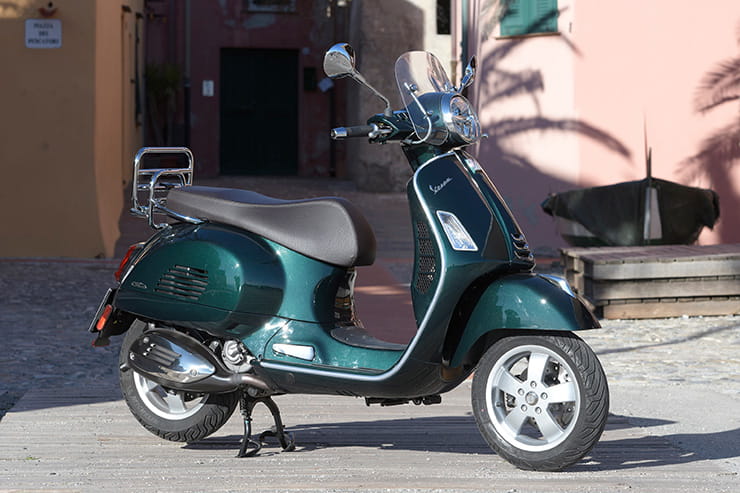 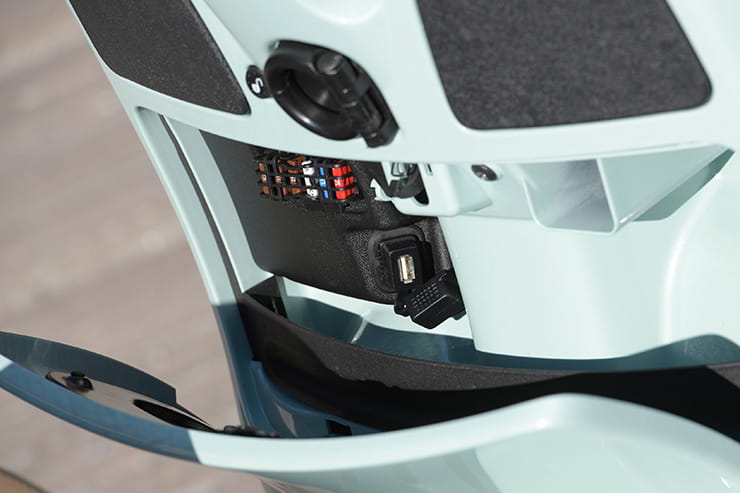 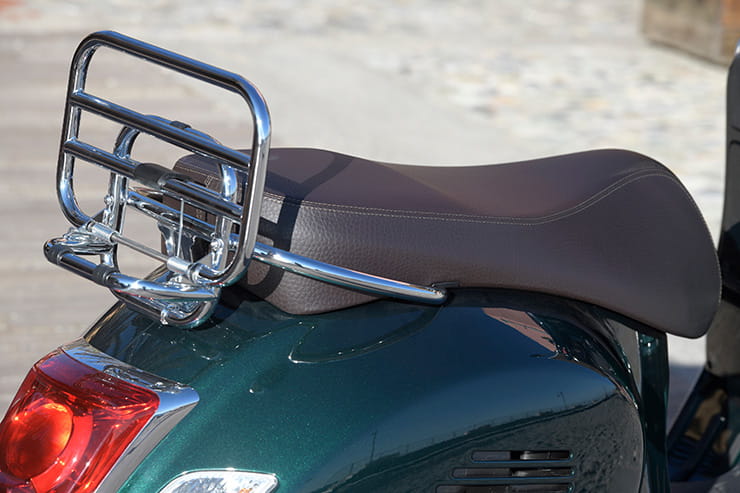 Alongside ABS, the 2019 GTS has traction control (or ASR as Vespa call it) as standard across the range, except for the GTV derived Sei Giorni special edition. This may seem overkill on a bike that makes 23.5bhp, but, combined with the ABS, the addition of ASR means that there is one less thing to worry about.

In addition to the under seat storage, a glovebox in the rear face of the leg guard provides small-item storage and a handy 5V USB outlet for charging your devices, though a cut out in the door to allow cables to exit for Sat-Navs or handlebar-mounted phones would have been nice. The comprehensive accessories catalogue includes screens, luggage racks, engine protection bars and pretty much everything an aspiring Vesparazzi could want or need. 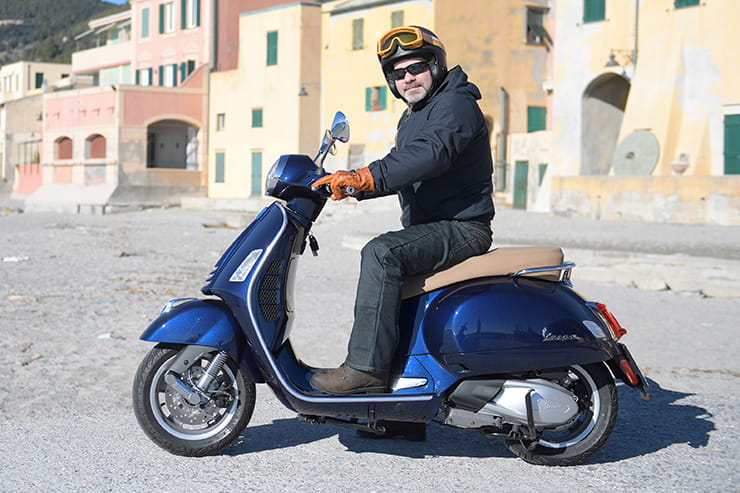 I was impressed with the way the GTS flattered my riding with its easy riding style and nimble handling. While it is difficult to translate a winding Italian coastal road to the daily commute across the Cambridgeshire Fens or the North Circular, I truly believe that every ride would be as enjoyable as our test ride. The Vespa’s ease of use makes it possible to enjoy any surroundings.

After a day in the saddle, the high sales figures in Germany that the GTS commands was much more understandable and raised the question as to why the UK has not adopted the vespone with such gusto.