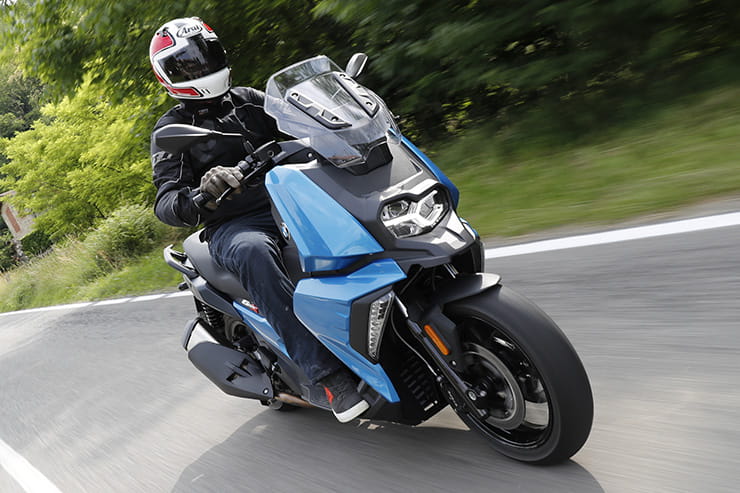 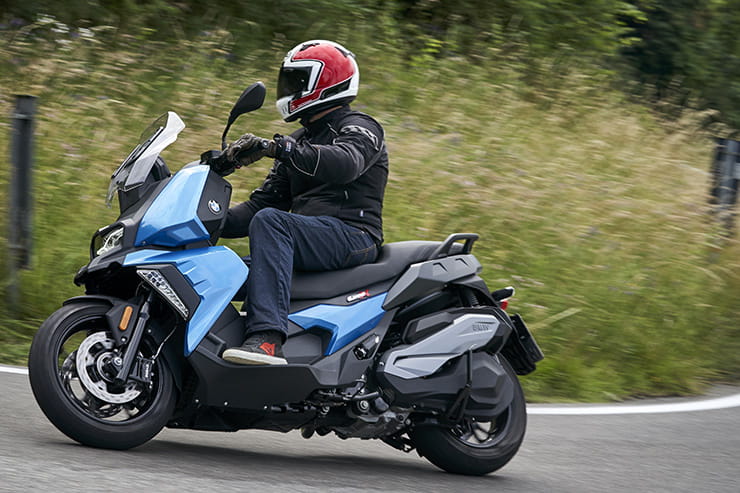 If you’re reading this review of BMW’s new C 400 X mid-size scooter, you’re either a city rider looking for a fast, agile way of getting around, or a motorcyclist who understand that choosing a scooter is no different to choosing an adventure bike, a sports bike or a tourer. It’s two-wheeled transport that fits the need of a certain rider.

If you’re a commuter, your rides take you through heavy traffic, you want the convenience of boot space or you simply want a bike that’s comfortable, very easy to ride, and more than capable on the motorway or twisty back roads, a larger-capacity scoot like the new BMW could be a great choice… 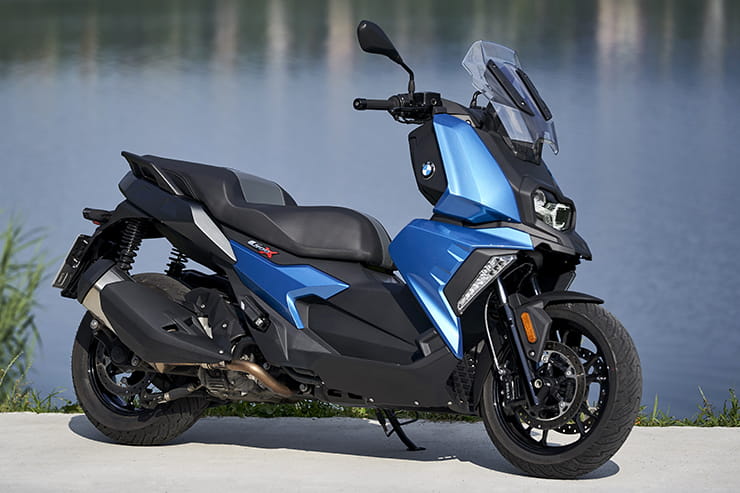 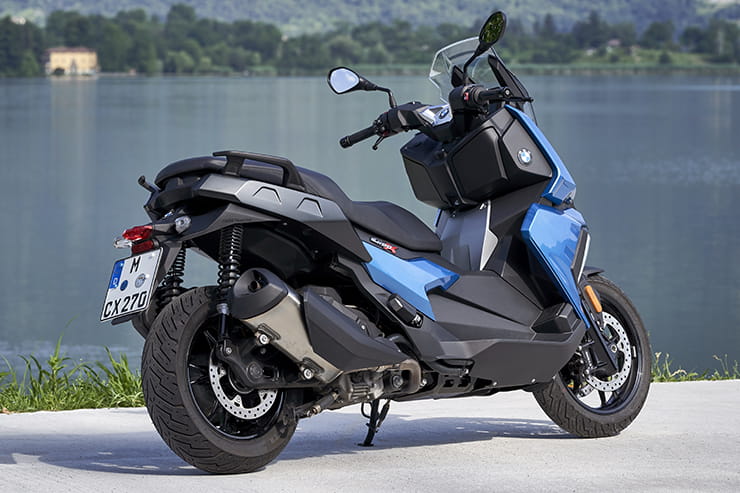 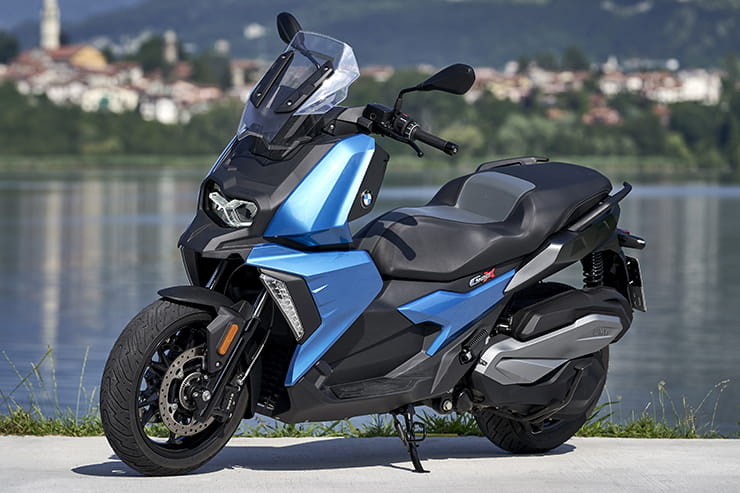 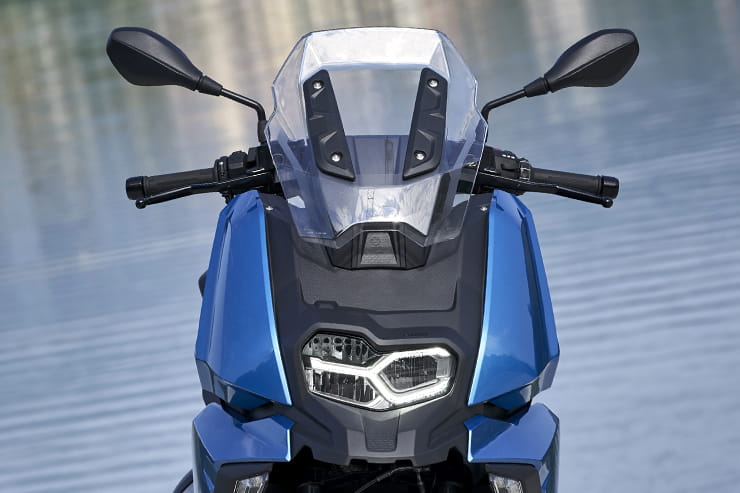 The C400X can look a little awkward from some camera angles, but in the flesh it looks great

Those not open-minded to the idea that a scooter is as much an exciting form of two-wheeled transport as a motorcycle will no doubt exclaim that “you could buy a proper bike for that.” Sure, you could buy some motorcycles for the same price, or even less, but that shouldn’t be surprising when you consider that both have a huge amount of development and engineering going into building vehicles that are, in the most part, much the same; the engine’s in a different place on a scooter (which takes more development), but it still has a piston, four valves and a heap of electronic control… It still has a carefully designed chassis, brakes, suspension and bodywork. In fact, many of the parts on the C400X are shared with those from BMW’s larger machines, like the headlight and filler cap.

Overall build quality is – as you’d expect – very high, and while the machine is made on a BMW-dedicated production line at China-based Loncin, materials and tolerances are of the same high standard as the bikes made in Europe. The Bavarian company has a long and successful history with Loncin, the F650GS for instance having been built there.

Our test scooters featured optional extras such as keyless ignition (290 Euro), heated seat and grips (395 Euro) and LED daytime running light (100 Euro). Prices for the UK are yet to be set, but we’ll likely see a high-spec model at a lower price than the separate options. 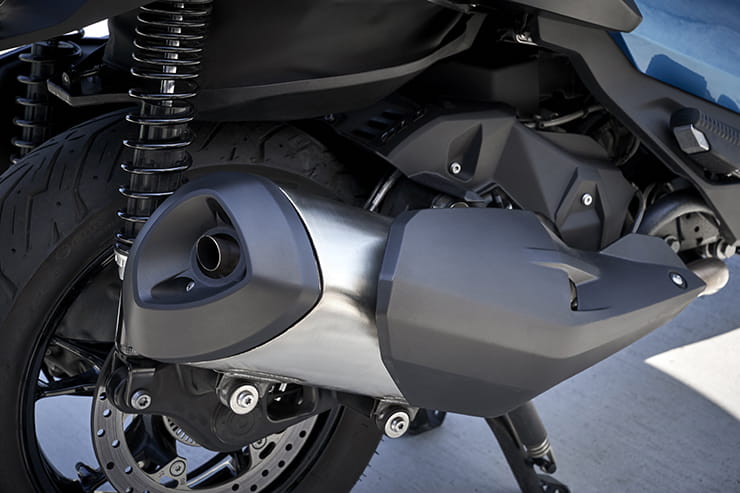 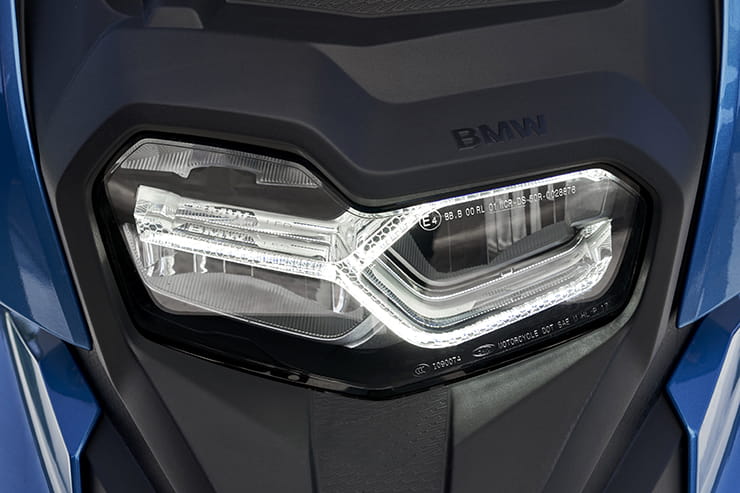 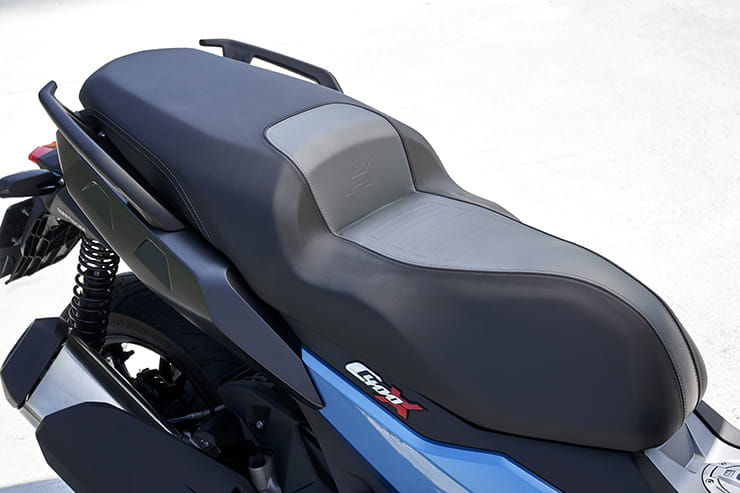 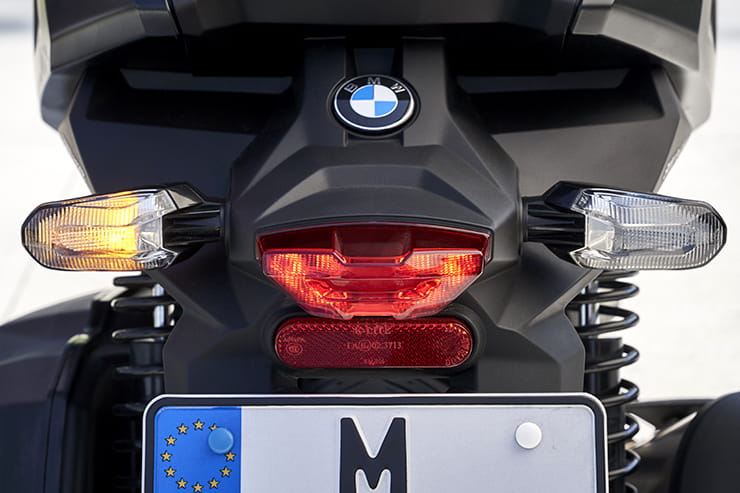 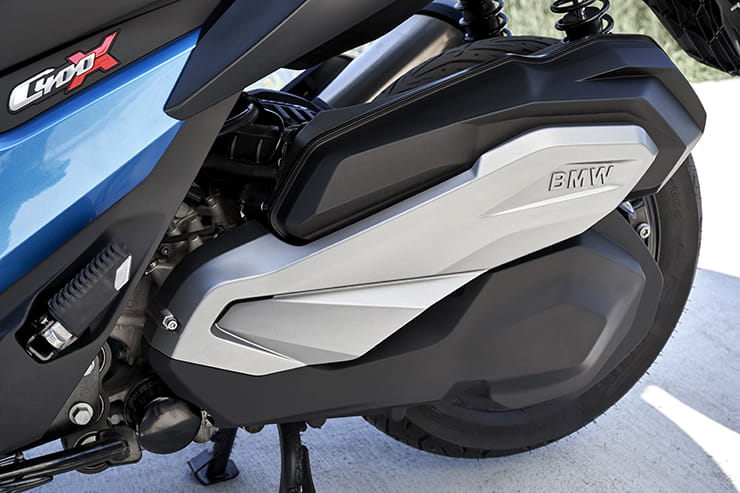 The C400X’s motor is a water-cooled four-valve single cylinder unit that – in typical scooter fashion – forms part of the swingarm. It’s mounted on rubber bushes, which BMW claims eliminate vibration without reducing rigidity… and they work – there’s no vibration at all from the motor when moving (you can feel it pulsing at a standstill), and the mirrors are completely still. Impressive.

This is CVT (Continuously Variable Transmission), which simply means it’s a gearless twist-and-go. A transmission belt is carried on two expanding pulleys that effectively change the gear ratios constantly and seamlessly.

The engine and transmission – like the whole bike – is unique to BMW; this is not a rebranding exercise. The engine design is similar to that used by other bikes in this sector, so it’s quite unlike the company’s C650 for instance. As other BMWs, service intervals are every 10,000km / 6,000miles, with a CVT  belt inspection every 20,000km.

Engineers at BMW said that the new 350cc engine was developed to give a good balance of performance and economy, with the added benefit that the layout has the flexibility to work for both smaller and larger capacities. While keen to stress that BMW is not currently working on other capacities, an engineer did tell me that “the chassis [of the C400X] would definitely handle more power.”

While it’s not got a sports bike howl, the stainless steel exhaust is tuned for a deeper note, and certainly sounds beefier than the G310GS for instance.

Economy is claimed to be 80.7mpg (Yamaha quotes 67mpg for its XMAX400) – given the 12.8litre tank, that could give a range of over 220miles. We weren’t able to get an economy figure during the test, but even if you didn’t achieve those impressive numbers, many commuters will likely only be filling up once a week. 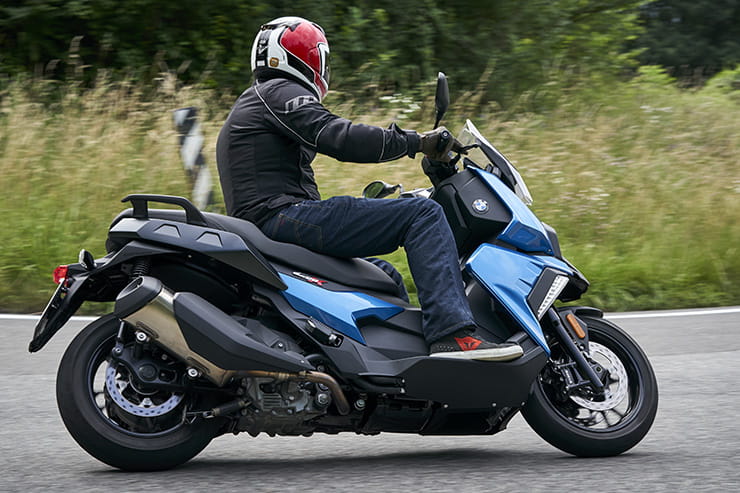 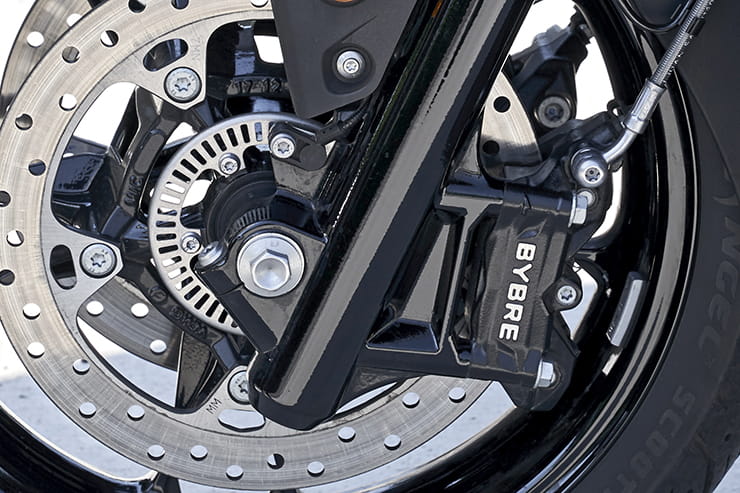 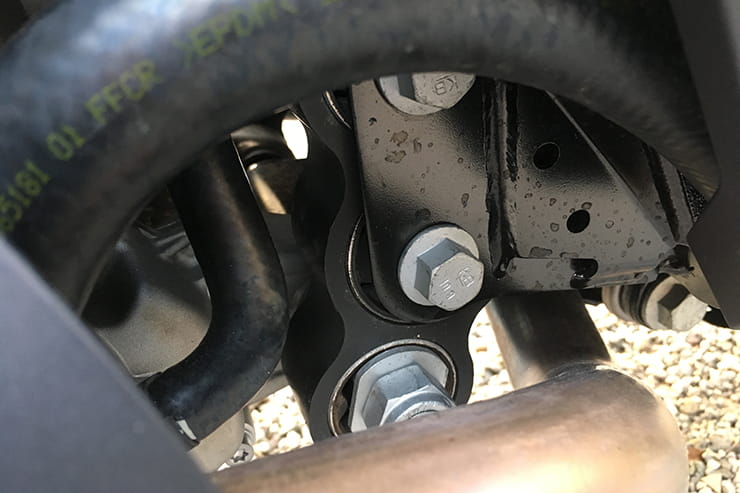 The C400X handles very well in twisties and at speed, while the Bybre brakes are excellent. The rubber bushes that isolate the engine are very well engineered

Despite its small wheels, the C400X handles very well. The chassis has a 50/50 weight distribution, and the telescopic fork and twin rear shocks give a really comfortable yet firm ride. Deliberately hitting potholes doesn’t feel crashy, and even accidentally launching over a speed bump didn’t see the bike too unsettled.

In traffic it’s excellent, with a tight turning circle and easy handling. On open roads, while it of course doesn’t have the grunt of a bigger-engined bike, it pulls well and is very enjoyable in twisty bends. There’s a lot of fun to be had in hustling a twist-and-go through back lanes.

The C400X weighs 204kg, which is 6kg less than Yamaha’s XMAX. It’s a well-built machine that carries its mass extremely well, and never feels ‘big’.

The two-channel Continental ABS works well; small wheels are harder to keep in contact with the ground, and the ABS activates easily, but even when grabbing a handful of front brake at high speed, the C400X is very well controlled and feels utterly safe, the ABS pump pulsing gently.

While a 760mm seat is available as an optional extra, at 5’ 10” I found the standard 775mm seat to be just right. The riding position feels pretty familiar to someone used to motorcycles, though you don’t have the room to stretch your legs out quite like you can on the larger super-scooters. Two foot rests at the front put my feet at a slightly awkward inclined angle, so I tended not to use them. A BMW engineer told me that they’re there after wind-tunnel testing showed they protected the feet more when riding in the rain.

A taller screen is available as an option, as is a skirt to cover your legs – a popular addition for city commuters. 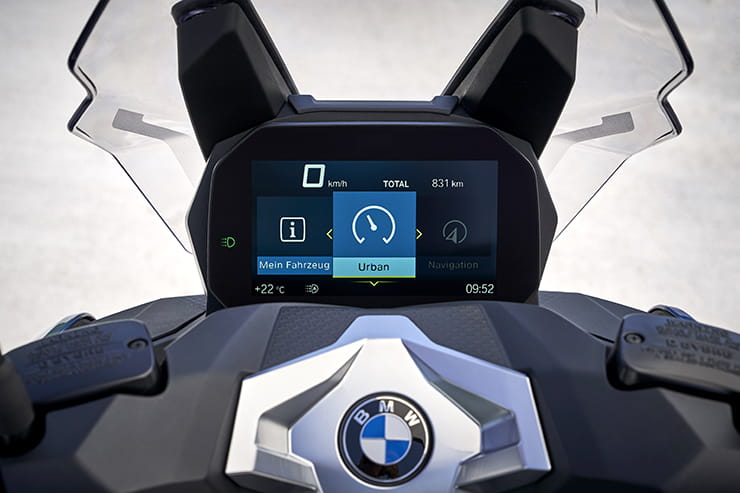 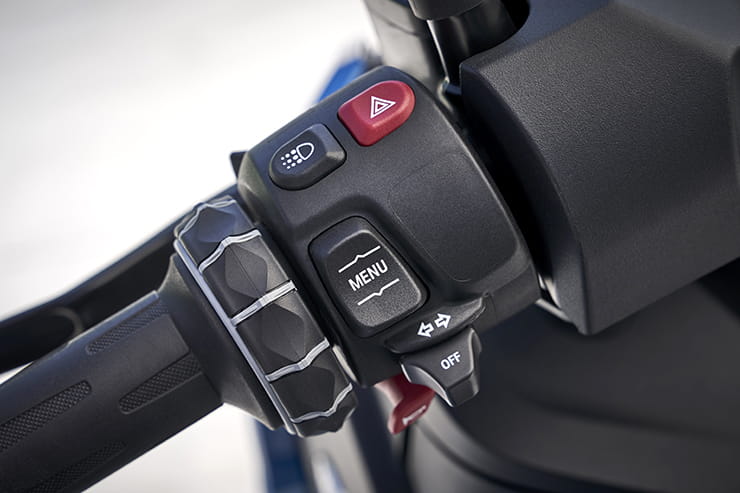 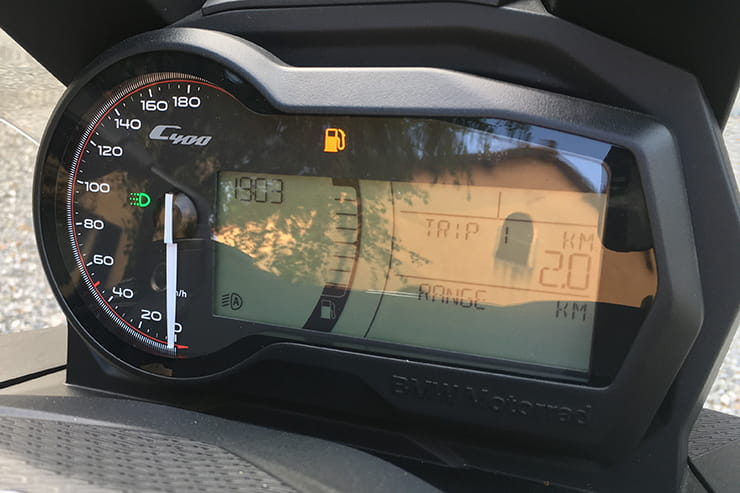 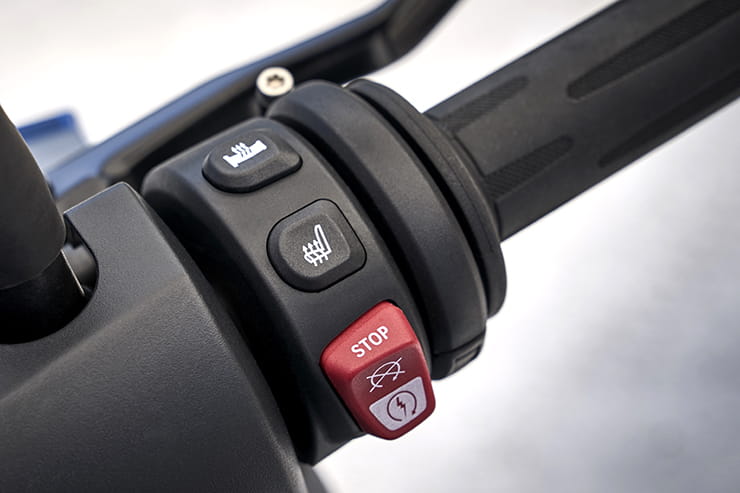 Our bikes had the TFT screen with multifunction controllers, as well as very effective heated grips and seat. The standard bike’s dash is an analogue speedo with LCD info

BMW is particularly proud of the C400X’s ability to link to your smartphone using the ‘Connectivity’ package. This factory-fitted optional extra costs an additional 605 Euro (UK price to be announced) and brings a TFT display and very easy to use multi-function controller.

By downloading the BMW Motorrad Connected app from the iOS app store or Google Play, up to five different phones can be connected to provide sat-nav directions to the dash. It’s recommended to download maps for your area within the app, to save using your data and to ensure it works in difficult signal areas; these are free but can take up a fair chunk of space on your phone – the England map is 928.2MB for instance. Mapping is currently supplied by ‘Here’, but BMW could switch to another supplier in the future, with a view to offering more motorcycle-focussed features.

If you have a Bluetooth helmet intercom you can also use the multi-controller to skip back and forth through music on your phone, and make and receive calls with full access to your contact list on the scooter’s display.

The app on your phone will also allow you to find where you last parked, check the weather, see where the nearest petrol station is, and view various data from the machine, including mileage, riding time and average speed. Also shown is when your next service is due.

You have the option to automatically record your rides and view them later, the app even allowing you to automatically embed any photos you take during the journey. Cleverly, a minimum distance can be set between one and 50miles before recording starts (to avoid logging every trip to work), as well as a minimum duration between one and five hours, and a maximum break time of between five minutes and 24 hours.

You can – if you want – share these routes with your mates using Rever, where they can be downloaded as a GPX; BMW is keen that riders of any brand of machine can share routes generated by its system.
Traction control is standard, and errs on the side of safety – this means that when pulling away from a loose gravel lay-by, the engine will bog sharply, so be prepared for it. You can turn the system off from the settings menu, but it’ll reset at the next key-on. 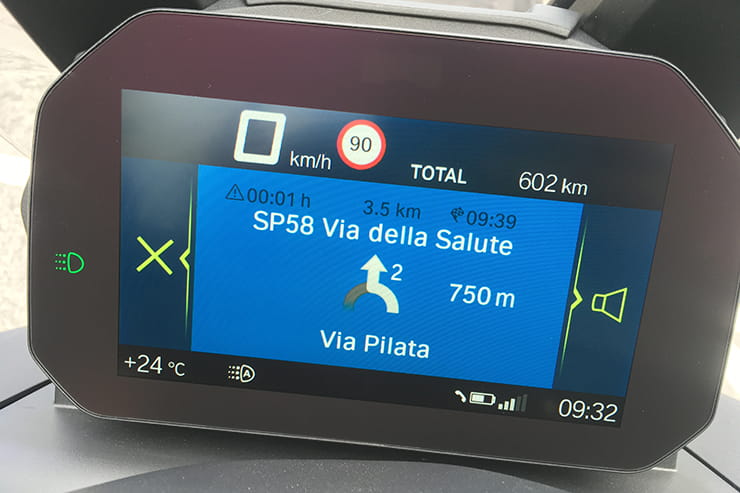 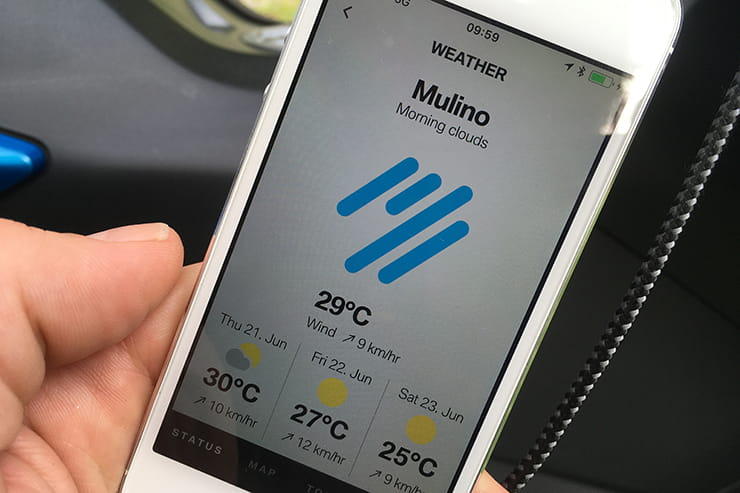 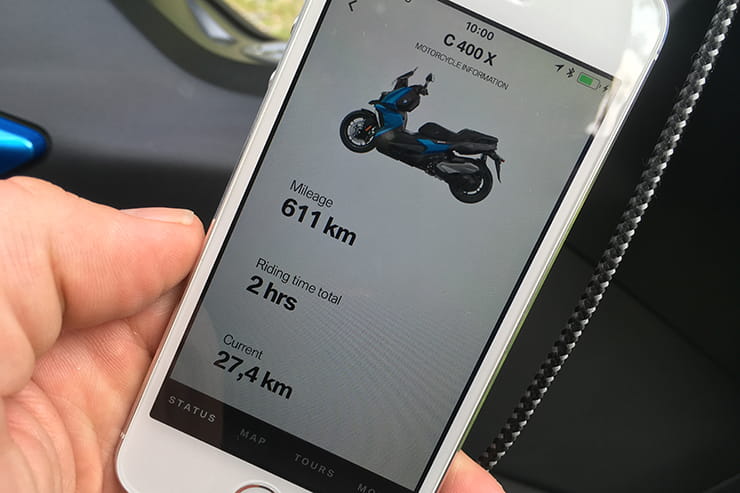 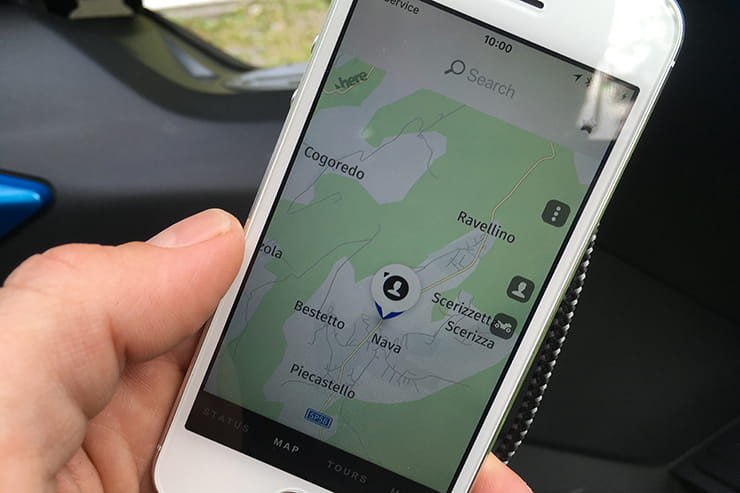 The Connectivity system gives directional arrows on the dash, while the app is well featured

Navigation is good, if not exceptional, but this isn’t intended to be a replacement for a fully-featured, dedicated sat-nav; the dash doesn’t show a map, just simple turn arrows. Roundabouts always display the same icon, but have a number next to them for the exit required. It works surprisingly well, and never let me down during our test. I did have one issue with the app not automatically connecting after a stop, but this appears to be due to a recent iOS update; BMW’s engineers are constantly updating the app so I’d expect it to be sorted shortly.

Audio directions, music and calls worked well through a BMW helmet comms system we were loaned for a period of the test, and while it can’t be guaranteed that other brands will work, most Sena devices have been successfully tested, and BMW recommends you speak to your dealer regarding compatibility. 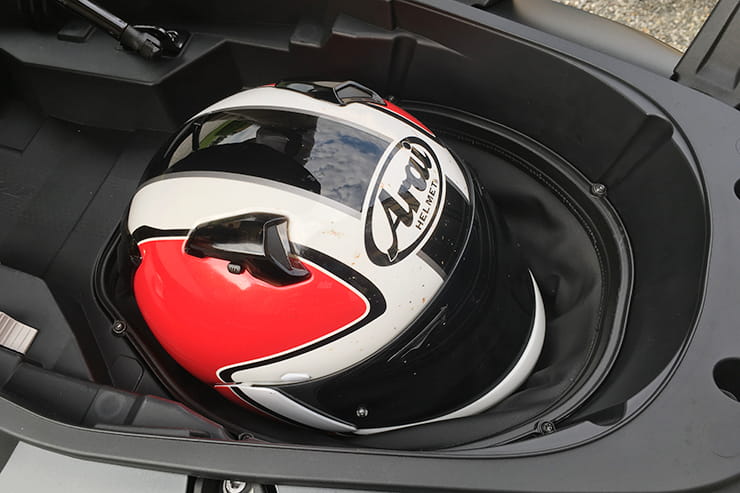 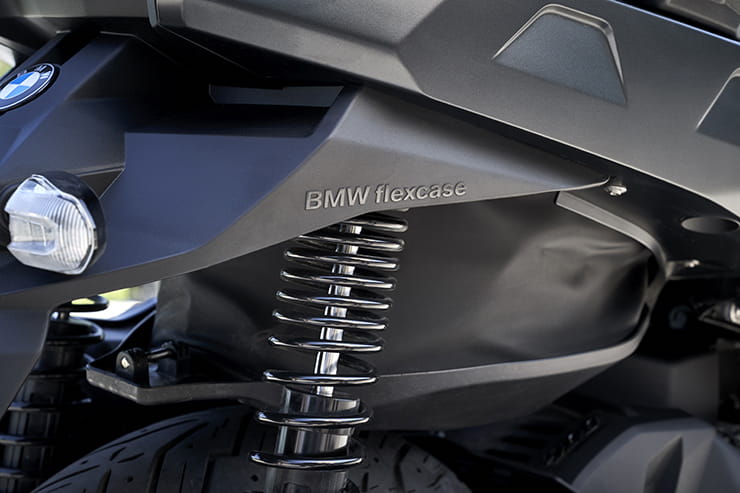 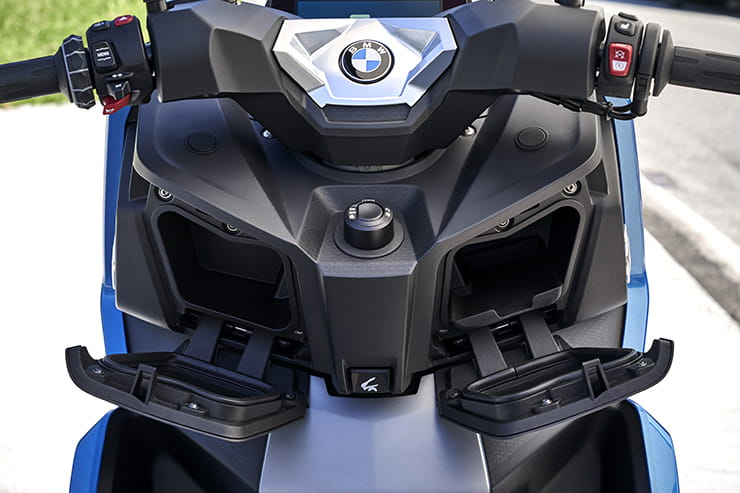 The boot can expand when parked up, and like the cubby boxes, locks when the ignition is off

Like the C650Sport, the C400X features BMW’s Flexcase; when riding, you can fit an open-face lid into the front of the boot, as well as documents, shopping etc. When you stop, a lever allows the rear to drop down into the space above the rear wheel that lets you also fit a full-face helmet in. The bike won’t run with this down as it reduces rear clearance.

The boot is opened with a button when the ignition is on, as are the two cubby holes at the front, one of which has a small DIN socket for power. It’d have been nice to find a USB power outlet here, but an adaptor will give you the ability to plug your phone in.

A 30litre or lighter-weight 29litre top box is available as an optional extra. 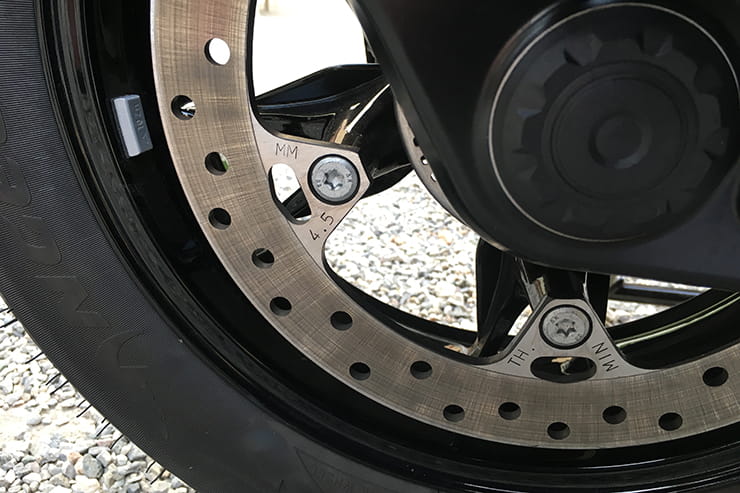 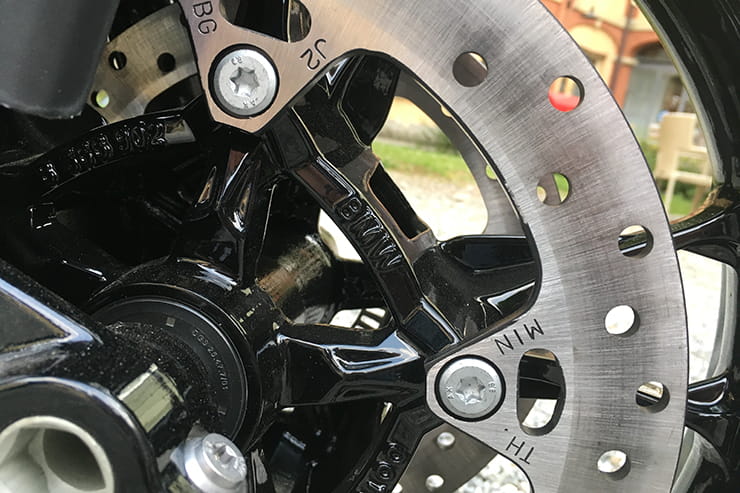 Plenty of space around the discs for a decent lock

Like all of BMW’s bikes, the C400X is fitted with the Datatag Master vehicle marking scheme. It has an immobiliser and the front and rear disks have large spaces that allow the use of many full-size disk locks. It’d be easy to use a full size U-lock, or a mini one that could be looped through the disk, then also attach to a chain – an effective method of securing your bike, and more hassle for would-be thieves.

The C400X is well priced and very well built. It handles well, stops well, and the engine is more than powerful enough for city riding, but also long distances while achieving excellent economy.

Having boot space is incredibly useful for day-to-day use; of course a motorcycle can have panniers or a top-box fitted, but the convenience of under-seat storage shouldn’t be underestimated.

Forget the idea that scooters are any less of a machine than a motorcycle – a mid-size sport scooter like this could be a perfect option for many riders, regardless of whether they’re city commuters or live out in the countryside.

• Even more boot space would have been handy

Looking to insure this bike? Find out more about Bennetts scooter and moped insurance.