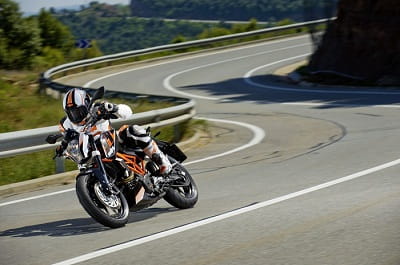 This may come as a shock to you, but KTM is actually Europe's largest motorcycle manufacturer. Yep, the guys in orange are bigger than even the mighty BMW and last year produced a massive 107,142 bikes. And they are getting even larger. Where most of the motorcycle manufacturers are seeing declining sales, KTM reported a 32% increase in units sold last year. The reason for this? Mainly the 125 and 200 Duke.

They say great things come in small packages (well my girlfriend says this!) and the two baby Dukes have proved a resounding success with the 125 Europe's best selling 125 and the 200 clearing 8,000 units in India. Which brings us nicely to Bajaj, the Indian company who own just under half of KTM and build not only the 125 and 200 but also the new 390 for KTM over in India.

In order to keep costs down, KTM have developed the small capacity Dukes to be 'platform' models. What this means is that the 125, 200 and 390 share the vast majority of their components, making them cheap to produce. The frame, swingarm, suspension (although damping is altered), brakes, tank, wheels, seat, clocks, everything is identical between the models. The only variations that the 390 has over the smaller capacity bikes is a set of proper Metzeler Sportec M5 tyres rather than the cheapie objects the small capacity bikes get and that's about it. Well, apart from the engine obviously.

Despite being a ground-up new engine producing 44bhp and 26ft.lb from its 375cc single cylinder, the 390 Duke's motor slots into the same frame as the 125/200 engine. So with the A2-licence compliant (after a 1.5bhp reducing re-map) Duke 390 you are basically getting a bike that weighs 12kg more but has 44bhp compared to a learner-legal 15bhp. A sure-fire recipe for fun.

To ride the 390 Duke is a real blast. The engine has a good spread of power low down then picks up and has an extra zap at around 6,500rpm. After a while you do tend to find yourself nailing it everywhere, but through town and on twisty back roads the 44bhp is certainly enough to provide speedy momentum with minimal vibrations and a lovely single cylinder exhaust note. As you would expect it has all the learner friendly boxes ticked such as a light clutch, decent throttle response, good steering lock and slick gearbox, however what the Duke has that others such as the Honda CB500 range lack is a serious weight loss program.

The Duke feels incredibly light and agile at both low speed and also on faster roads. The WP suspension doesn't feel cheap and nasty while the Metzeler tyres are a huge improvement on the horrible items on the 125. You can chuck the 390 Duke around with confidence and it can certainly crack on through the corners. It's a genuinely good handling and very nimble machine that doesn't have that flighty feeling that small capacity machines often come with. But will it succeed?

Well here is the good news. The 390 Duke costs £4,495 which is only £500 more than the 125 Duke. In my book that's a bargain and although it is built in India, which may put some off, KTM check every single bike in their Austrian factory before sending them out to dealers to ensure quality. Judging by the positive reaction to the smaller capacity bikes I can't see the 390 Duke failing. It's a great looking, good handling A2 bike that has worldwide appeal and is certain to provide a further boost to KTM's expansion plans. As an aside note, which demonstrates how KTM are continually evolving their product range, the bikes that will arrive in dealers will have orange wheels and not black - the powers that be decided that black just wasn't cool enough having seen the press images!!! 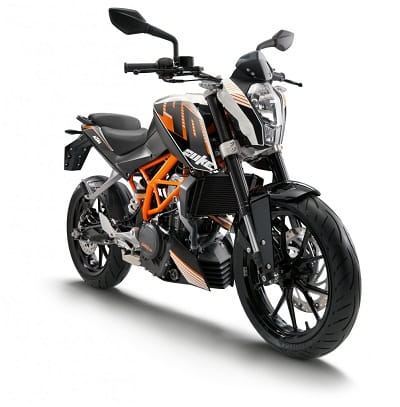