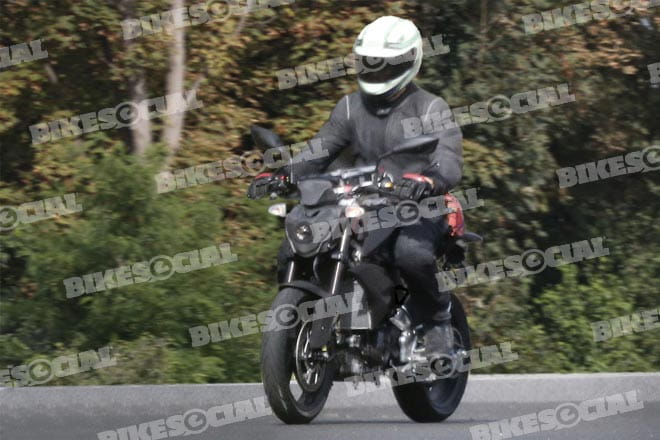 BMW is ready to wheel out a new sub-500cc capacity bike, and we've seen a prototype of it testing.

This prototype comes on the back of BMW having its biggest-selling year for motorcycles last year with 123,495 BMW motorcycles sold last year.

Reports are already circulating of at least one additional, smaller-capacity model based on a similar format in the shape of a mini-GS adventure style bike. Rumours are also gathering pace of a mini-RR sport-bike focused machine to rival the likes of the forthcoming Yamaha R3, Honda CBR300R and Kawasaki Ninja 300.

The rather crude looking prototype is far from production-ready but in this round of tests it is clear to see from the photographs that naked styling and angular fairing give BMW a distinctive new look.

What do the shots tell us? A single headlight unit, one-piece rider and pillion seat, five twin-spoke alloy wheels, single front brake and monoshock rear suspension are all evident and all look to be of high quality. The front mudguard hugs the tyre while the rear-wheel clearance is vast by comparison. The tail-tidy is familiar from other BMW models, the position of the single-side exhaust won’t change but its finish will be improved while the low seating position and narrow body look set to offer a comfortable ride especially for the shorter rider. 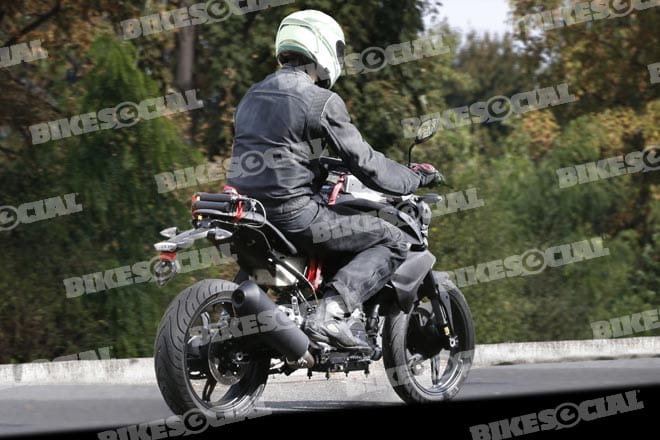 Record-breaking sales for KTM in 2012 came as a result of huge sales of smaller models (namely 125, 200 and 350cc) across the Far East which was attributed to their new collaboration with Bajaj Auto – the second largest motorcycle manufacturer in India.

Fast forward to August 2013 and BMW Motorrad announced a partnership deal with Indian company TVS – the largest motorcycle manufacturer in India – with a focus on developing and manufacturing smaller capacity motorcycles to be sold under both brands across the various global markets. Given that TVS is already a household brand across India and Asia then the bike in our spy shots may well have that badge for one side of the world while being marketed as a BMW for Europe and North America.

So, it’s also no surprise to learn that a KTM 390 Duke was also spotted alongside the BMW for comparison.

The KTM produces 44bhp, has a top speed of 100+ mph, weighs in at 139kg (dry) and offers a claimed 60mpg, it’s fair to assume BMW will be basing their latest brand-new model on similar figures.

Meanwhile, Triumph may have publicly scrapped their much-reported 250cc commuter which was set to be built in Inida, but sources close to the factory claim the bike could well be re-engineered as a 300cc model to rival the machines all other major manufacturers have already released or are currently developing.

Any thoughts on BMW's dipping their toe into the smaller capacity market?