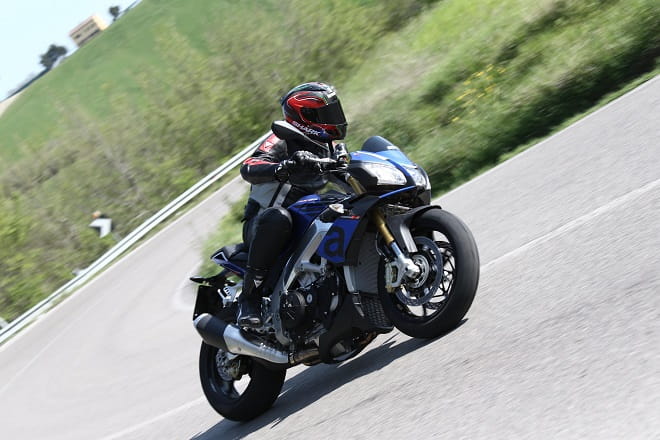 It says much for Aprilia’s approach to the Tuono that when the Italian firm decided to upgrade the naked V4 roadburner for 2015, their first plan was to bolt in the engine from the super-sports RSV4 in unchanged, 180bhp form. Stripped-down superbikes don’t get much more hardcore than that.

But then the Italian firm’s development team had second thoughts. After all, the super-naked class has moved on since the original Tuono V4R was launched in 2011, notably with the arrival of serious competition from powerful yet refined rivals including BMW’s S1000R and KTM’s 1290 Super Duke R.

Aprilia, who had already updated that original, brilliant but barking mad Tuono V4R two years ago, decided that a slightly more rider-friendly update was required. So as well as tweaking the chassis, revising the riding position, updating the electronics and sharpening the styling, they went to work on the 65-degree V4 engine, enlarging it from 999 to 1077cc to create the Tuono V4 1100.

The result was a 5bhp power increase that takes the maximum to 175bhp at 11,000rpm. But that wasn’t the main reason for the increased capacity. More importantly, low-rev response has been made smoother, and midrange output has been boosted to give an extra 20bhp at 8000rpm. 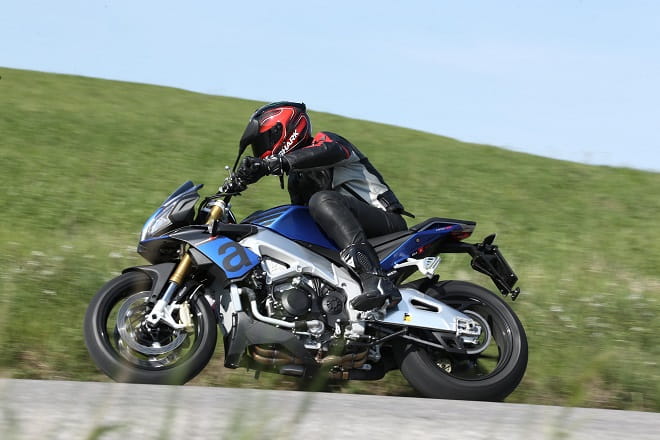 There’s more to the new 16-valve engine than its extra cubes, which come from increasing the bore by 3mm to give dimensions of 81 x 52.3mm. Elsewhere the mods are aimed at reducing size or weight, including lightened crankcases, smaller and lighter piston pins, lighter Pankl conrods, plus a redesigned crankcase ventilation system to reduce power loss due to air pressure.

As I crack open the Tuono’s throttle on the exit of a typically tight bend in the hills inland from Misano circuit on Italy’s east coast, I’m not sure how much the extra capacity is helping but I’m in no doubt that the Aprilia is one hell of a weapon. The big motor revs with fierce yet deliciously controllable force, the bike leaping forward with an unmistakable V4 growl from its silencer and the wide handlebar twitching slightly as the front wheel goes light.

The Tuono is quick, alright, and on these roads its sophistication as important as its power. The flawless throttle response and cutting-edge electronics combine to help keep it between the hedges as I short-shift through the box, the quick-shifter notching gears seamlessly… but I’m barely into fourth when it’s time to haul on the fiercely powerful Brembos for another tight turn, and begin the process all over again. 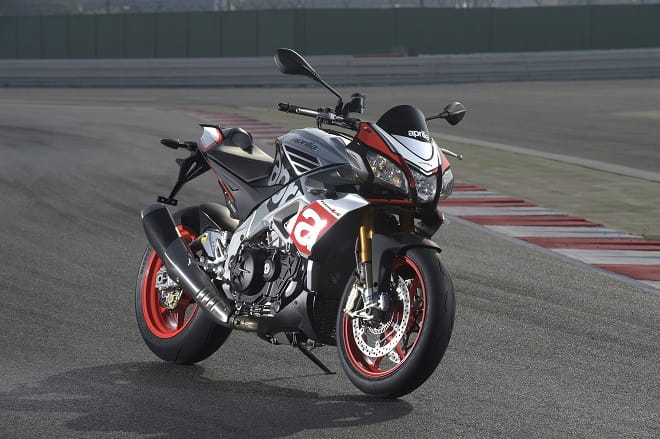 One of the Tuono V4’s biggest assets has always been that the super-naked model shares the electronic wizardry of the RSV4 on which it’s based, and that very much remains true. The APRC (Aprilia Performance Ride Control) system is updated with a more powerful ECU that gives a choice from three engine maps, including a new track-oriented Race setting with reduced engine braking.

Most APRC features are refined but the list of acronyms is unchanged: ATC traction control, adjustable through eight settings via buttons on the left handlebar; AWC wheelie control, ALC launch control and AQS quick-shifter, all of which are further refined although, like the RSV4’s, the shifter still doesn’t work on down-changes.

The chassis is also tweaked along similar lines to that of the latest RSV4, notably with the aluminium twin-spar frame being modified to steepen steering geometry slightly, while the swing-arm – also a seriously stiff aluminium construction – is lengthened by 4mm. The standard Tuono V4 1100 RR gets Sachs suspension and steering damper, while the upmarket Factory model has Ohlins kit instead (and costs £14,635 to the standard bike’s £13,135).

Both models would doubtless have been very well suited to the smooth, mostly fast turns back at Misano, but unlike the last two Tuono V4 launches this one doesn’t involve any track riding. Instead I’m bouncing along the back-roads on an 1100 RR with just 110mm of front suspension travel and 130mm at the rear, struggling to get much heat into the Pirelli Diablo Rosso Corsa rubber on roads that are frequently as dusty as they’re potholed. On these roads semi-active suspension would have allowed a more complaint ride without loss of control; maybe next time.

I didn’t have any need of the new Race riding mode but both Track and Sport gave very smooth delivery. And at least the tricky conditions emphasised what a good job Aprilia’s engineers have made of the fuelling. For such a powerful bike the Tuono was impressively easy to ride, and with its upright riding position and reasonably low seat – 15mm lower, at 825mm – it would make an improbably good town bike. 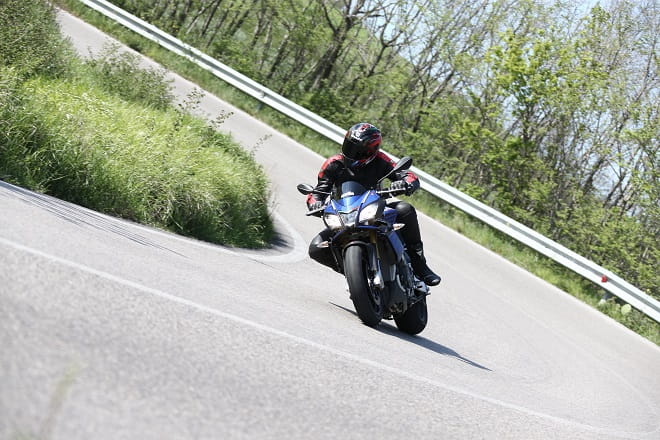 The revised chassis was also impressive, the Tuono’s light weight (184kg dry) and slightly steeper geometry helping it steer through those tight turns with minimal pressure on the wide handlebar, and the slightly longer wheelbase doubtless helping keep it stable, while not preventing the wheelies that are so effortlessly possible with the traction control on its lower settings.

Predictably the front brake blend of 320mm discs and Brembo Monobloc calipers gave ferocious stopping, though I was surprised that the Bosch ABS cut in quite regularly before I switched it from the second, road-based setting to the less intrusive track setting.

As we rode back through the Misano circuit gate it was a shame that we were ending the test, rather than being about to continue it on the track that would really have allowed the Aprilia to shine. We’d also have had a chance to get near its top speed of around 170mph, though not without some neck-ache because the redesigned half-fairing, which holds new lights (which save 1.5kg of weight), doesn’t give much wind protection.

Even so, there’s still surely no super-naked that is better suited to serious speed. This updated Tuono is a more flexible and refined streetbike than its predecessor, but there’s no way it has gone remotely soft. At heart it’s still a lean, powerful and aggressive stripped-down superbike – and all the better for that. 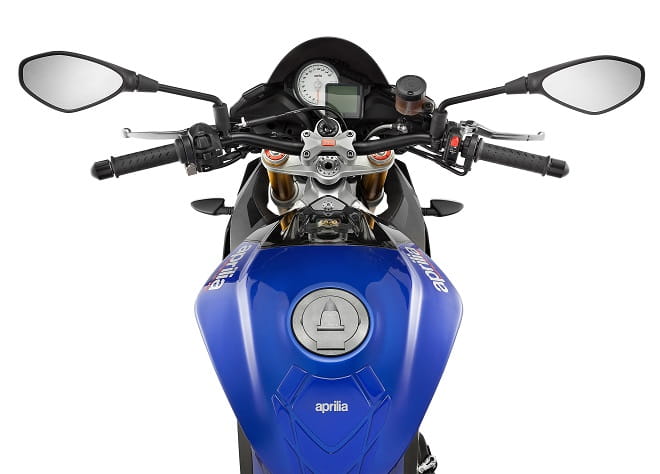