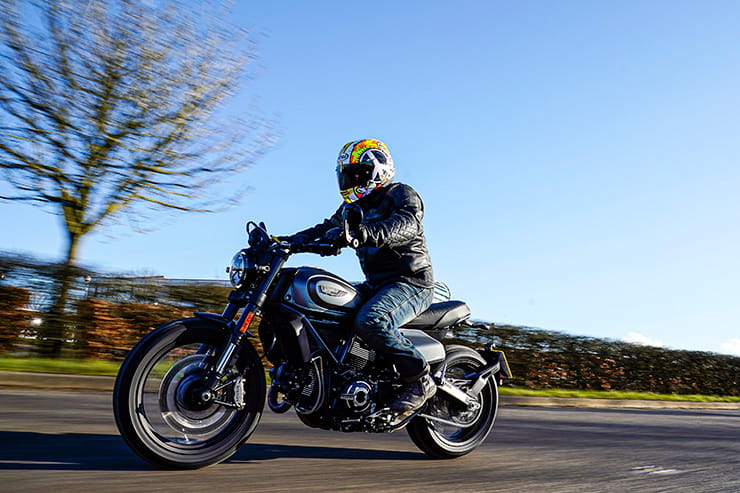 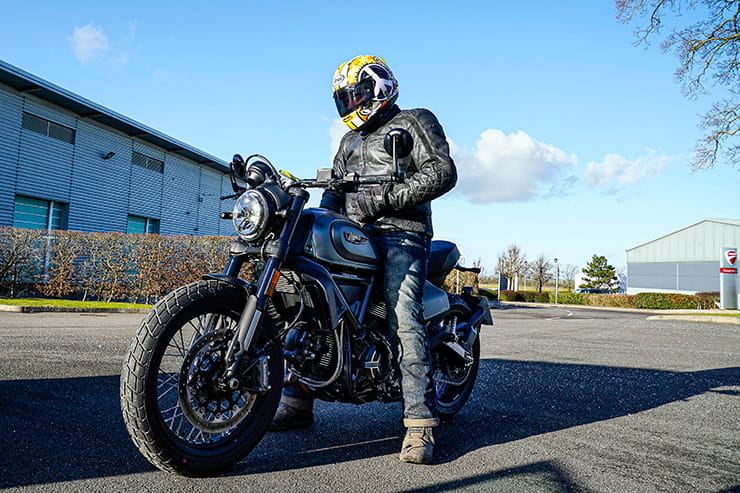 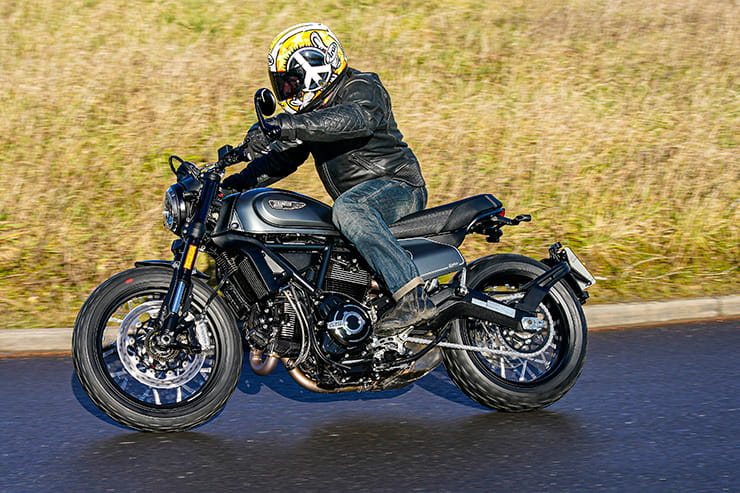 In 2015 Ducati whisked me away to California to the ‘Land of Joy’ to experience their highly anticipated Ducati Scrambler Icon. Ducati set out to create a new sub-brand – apparently this new bike was a ‘lifestyle choice’ – and the introduction of the new Scrambler was hyped by hipster images and glamourous locations. It was aimed at a new generation of potential Ducati owners, those more concerned about image and personalisation rather than performance.

Once we’d peeled back the hipster layers there was no hiding the fact the Scrambler was an excellent entry-level bike into the Ducati brand – simple and easy to use with big boy bike kudos. Move to September 2018 and I was in Italy testing the updated Scrambler for 2019, and again the launch was surrounded by clever marketing and imagery. And once more the excellent Scrambler shone. It wasn’t a huge step forward over the older model, but the improvements were significant, especially the introduction of cornering ABS.

The Scrambler, in both 803cc and 1079cc (1100) formats, have been a stunning success for the Italian marque. As we move into 2021 Ducati has simplified the Scrambler range, removing the Café Racer and Full Throttle, and introduced one new model, the Nightshift. We grabbed the keys off Ducati UK as soon as the bike arrived and took the attractive new Scrambler for a spin. 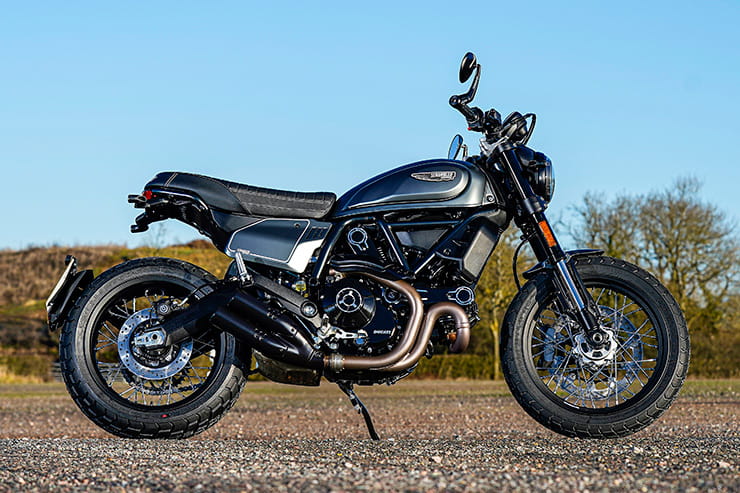 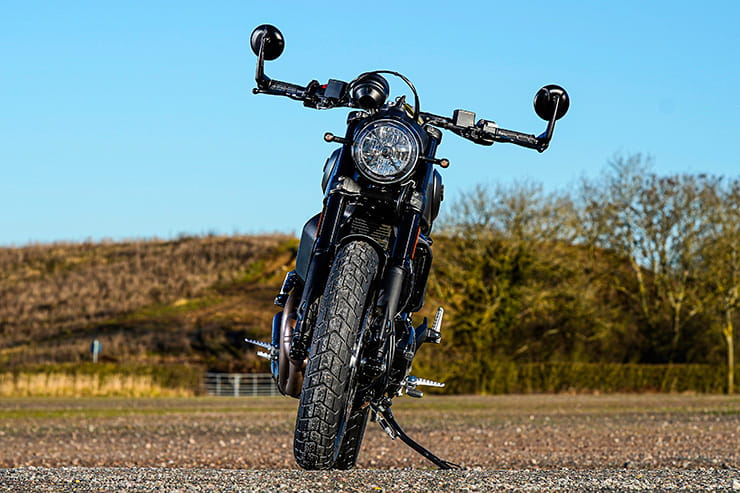 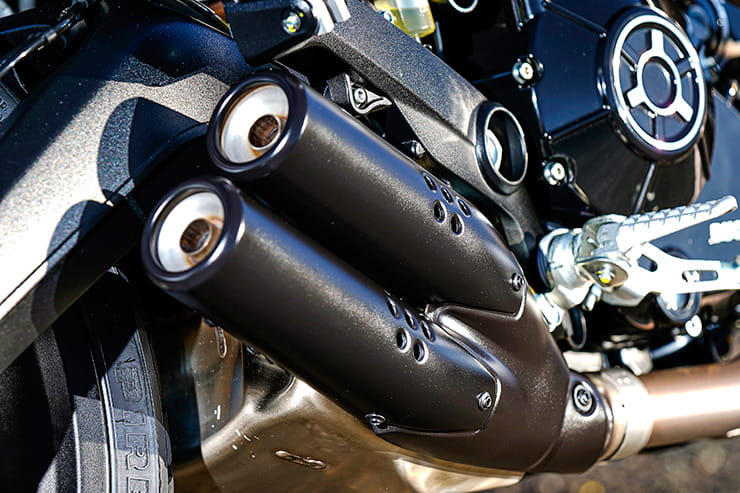 When the first Ducati Scrambler was introduced in 2015 it was pitched at a price-competitive £7000, or thereabouts, and represented a relatively cheap way into the aspirational Ducati brand. However, today’s entry-level Scrambler has edged up in price. The base, Euro-5 Icon is now £8399, and the bike we have on test, the new Nightshift, is close to 10k at £9595. The price hike has much to do with an ever-changing global economy, and in Ducati’s defence the Scrambler has improved significantly from that first model. But just under £10k for an entry-level Ducati might be a little too much for some potential customers, especially when you have a quick look at the competition.

The competition isn’t particularly obvious. In fact, I suspect most customers will simply want a Ducati Scrambler – full stop ­­– and their only decision will be which model: the base Icon, the Nightshift or the off-road looking Desert Sled for 2021. However, you could also argue there is some competition in new Moto Guzzi’s air-cooled V7 Stone, starting at £8000 (2021 model). Triumph has their 900cc Street Scrambler at £9300 and let’s not forget Yamaha’s XSR700 at £7699 and XSR XTribute £8399. Yes, the Japanese alternative may not be as aspirational, but it’s a simple, stylish café racer that will attract a similar audience.

The relatively basic air-cooled L-twin is loosely based on the old Ducati Monster 796 (803cc) engine (which produced a quoted 87bhp). Bore and stroke are the same but valves, injectors, exhaust, intake, airbox are all completely different. In 2019 Ducati introduced a hydraulic clutch, instead of the conventional cable, and in 2021 the motor remains unchanged.

So the ‘base’ of the engine is over ten years-old, and output, 53.6kw/72bhp @ 8250rpm and 66.2Nm/48.8lbft @ 5700rpm, will hardly impress your mates down the pub/café/caff/bistro, etc.. but the engine is bulletproof, eminently usable and, importantly in this market, attractive. Ducati could have gone searching for more power with a modern, water-cooled engine but it wouldn’t have had the visual appeal and character of the simple air-cooled L-twin. 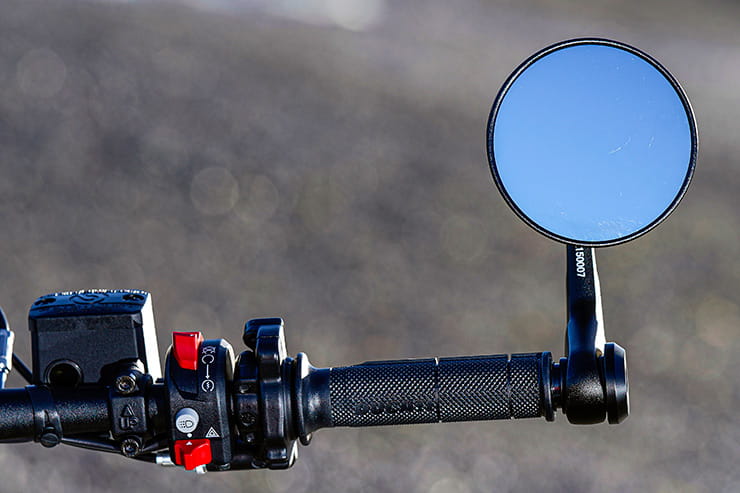 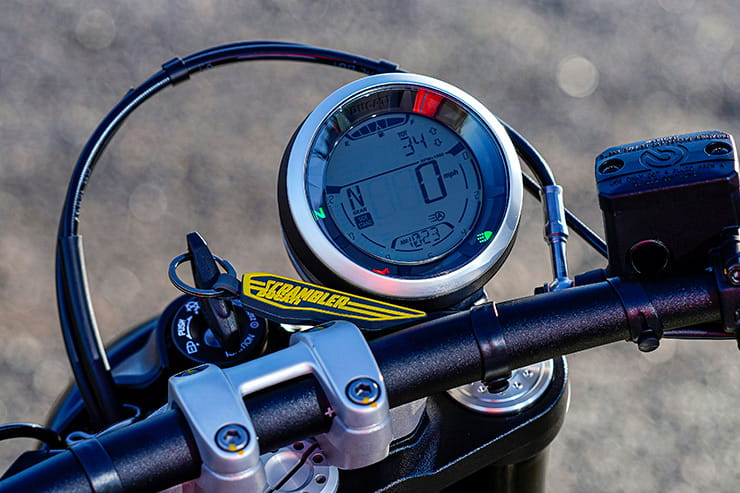 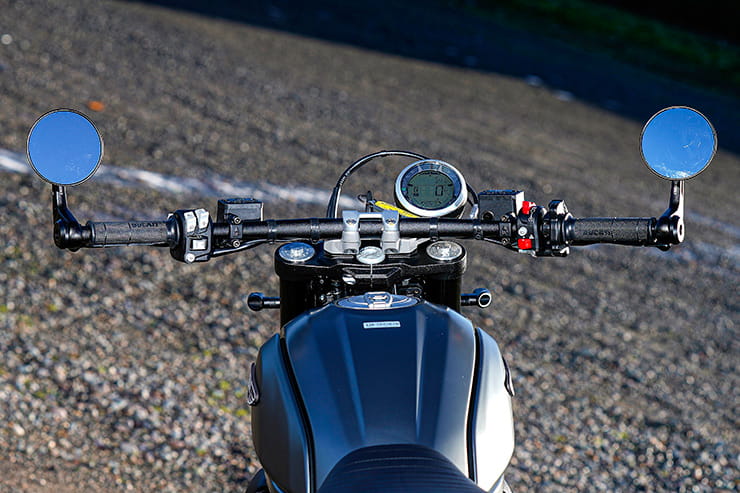 Back in 2015, when I first rode the then-new Scrambler, I’ve always admired its simplicity. Just jump on, press the starter button and ride. The air-cooled motor has been diluted by Euro-5 restrictions, and the attractive, twin-stacked exhaust just about beats out enough decibels for it to offer some character.

Power delivery is soft and friendly, and there is a lovely connection, even at low speeds. Peak torque is at just 5700rpm so there’s no real need to rev the twin; instead short-shift and enjoy the usability of the Desmo motor.

Just because the Scrambler wouldn’t win in Top Trumps doesn’t mean it’s slow and boring. All of the 72bhp is readily available - that flat torque curve gives great drive from anywhere and, combined with typical Scrambler lightness, you soon realise this anything but a slow bike. I’ve done countless miles on different variants of the Scrambler over the years, and I’m always pleasantly surprised by its sprightly and well-measured performance, which is more than enough for the road and cruising along at high motorway speeds without it feeling breathless.

Experienced riders dropping down in capacity for a Scrambler may miss the lack of over-rev and might like a little more excitement towards the top end too, but the target audience of new and inexperienced riders will love its accessibility. After all, almost any gear will do! And around town the hydraulic clutch is light, the gearbox is smooth… it’s a delight to ride and as useful as it is attractive.

As you’d expect, economy is reasonable for a low revving air-cooled twin. Ducati claim 54mpg, I managed a little less at 52mpg, which gives you a theoretical tank range of just over 150 miles from the 13.5l fuel tank. A fuel gauge was added in 2019, rather than a fuel light, and you’re going to need to start looking for fuel around 120-130miles, which isn’t bad. With reasonably friendly ergonomics and a new and comfortable flat seat, embarking on some serious miles on the Nightshift isn’t unthinkable. I spent all day in the saddle without any comfort complaints. 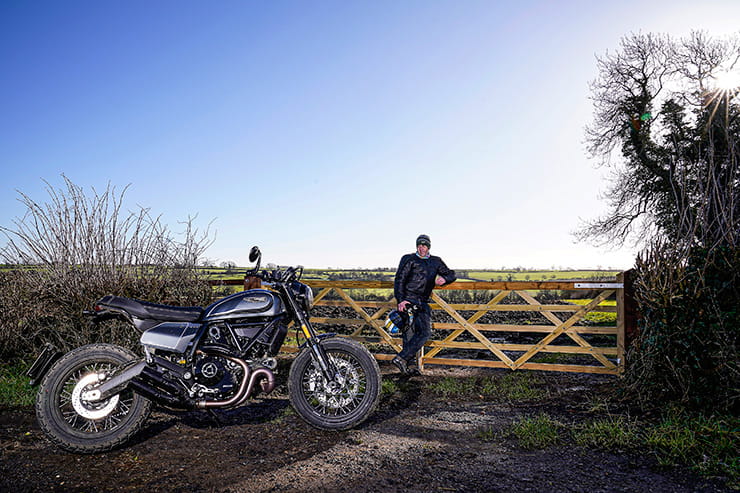 The straight and narrow handlebars, complemented by racy bar-end mirrors and retro side-mounted number boards, give the impression of a radical riding position, whereas it’s much more relaxed than it appears. The new bars are not as natural as the standard Icon’s traditional Scrambler bars, but, equally, they aren’t extreme or uncomfortable, even at low speeds and around town. For reference, I’m only 5ft 7in and taller riders may find the bars more compromising, but they aren’t as radical as you might think – the Nightshift may appear to have a sporty edge but, in reality, it’s as extreme as mini-golf.

The only downside to the new bars is the bar end mirrors, which some people love, some hate, and the steering is a little slower – not as natural. On the standard Scrambler, you’re upright, turning with wide, friendly bars. In comparison, on the Nightshift you’re further forward in the chassis, more over the fuel tank, which gives a racier feel. You feel more obliged to hang off the Scrambler mid-corner, rather than sit back and simply turn in a traditional manner. I like it, though, the riding position encourages you to tuck in, and stretch the cable a little more.

In 2019 Ducati revised the suspension, increasing the static sag on the rear to improve the ride, making it more forgiving with more movement. But this hasn’t turned the Scrambler into a bouncing mess; it still holds its line and the basic chassis with just preload adjustment on the Kayaba rear shock works as soon as you leave the showroom. The bike is light at 173kg dry (20kg lighter than the Desert Sled version), flickable and almost toy-like at times. But it is just as happy on the faster stuff as it is cutting up traffic around town. With an 18in front wheel and 17in rear, and off-road looking rubber, it shouldn’t really work, but it does.

Those Pirelli MT60 tyres work well in both the dry and the wet and offer great feedback. You can have real fun on the Scrambler, carrying corner speed with confidence. Even when you push on it still performs and is far more capable than it needs to be.

A single 330mm disc up front is gripped by a Brembo radial caliper – cornering Bosch ABS was introduced on the 2019 upgrade. As the Nightshift is so light and speeds should be relatively low, the single disc stoppers are more than capable, and aren’t too abrupt. The introduction of cornering ABS was a welcomed addition for new and experienced riders alike and isn’t intrusive. 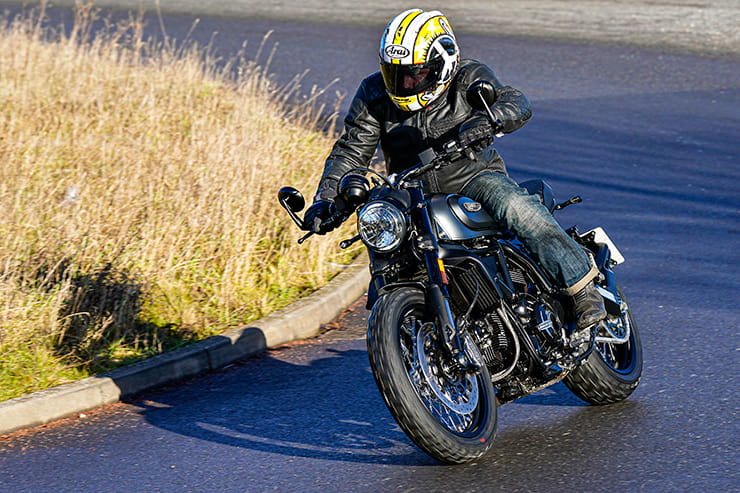 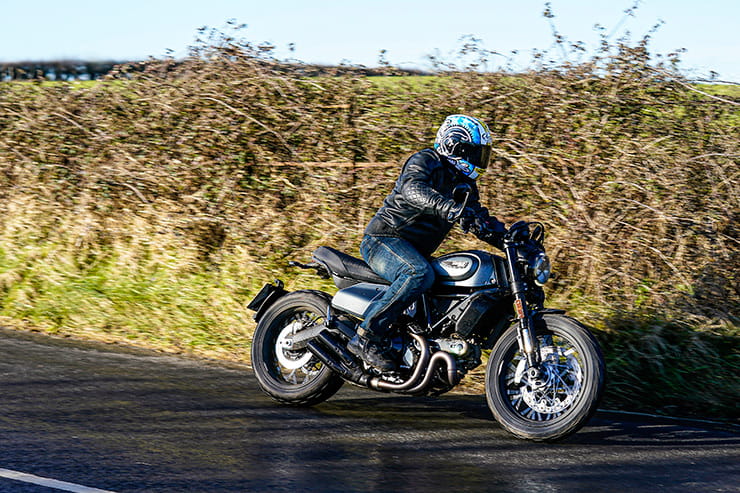 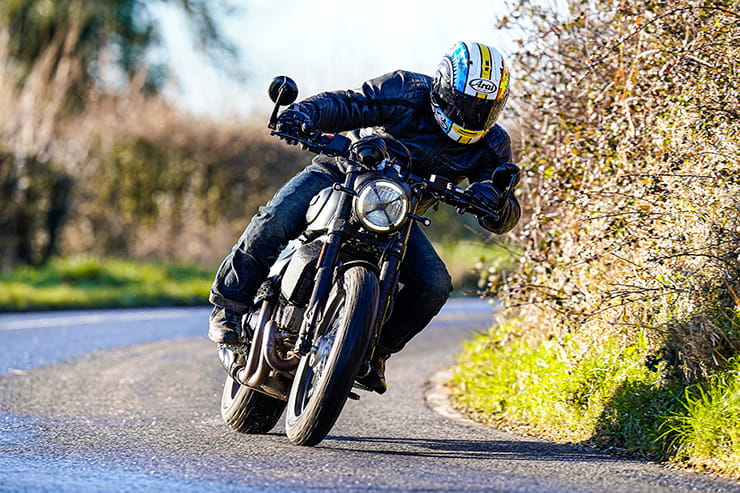 As mentioned, cornering ABS carries on from the previous model yet there are still no additional rider aids like traction control. Are sophisticated rider aids needed on a relatively slow-revving air-cooled Ducati that has excellent mechanical grip and feedback anyway? Possibly not, but new riders might be more attracted to the competition which has TC as standard.

The Nightshift features very neat Ducati Performance LED indicators (EU only) which are also self-cancelling. There is also a LED DRL headlight, as per the previous model. The USB under the seat is a nice touch and comes in useful.

If the Nightshift isn’t individual enough for you there is a host of accessories to personalise the bike further. One of the fun characteristics of the Scrambler range is that you can add or remove parts easily, they are relatively simple to work on and there is a hefty catalogue of different exhausts, rear ends and accessories to choose from. And Ducati hasn’t stopped with the bikes; there is a huge range of attractive Scrambler clothing, from hats and watches to leather jackets and helmet bags. Sometimes it’s hard not to get hooked on the hipster thing…

The Ducati Scrambler range has been a huge success story for the Italians. Away from the hipster image and very clever marketing the new Nightshift carries forward the original bike’s qualities, namely being easy to ride, fun, lightweight, good looking and powered by a charismatic engine with enough performance on the road.

The Nightshift is an excellent first bike, second bike, extra bike, well it’s a gentle step into the Ducati brand anyhow. The fact that it looks like a one-off special and not a standard production bike can only add to its appeal. My only concern is the price; we are now close to £10K for an entry-level Ducati. Yes, I know this is a premium brand, and the bike looks stunning, but I think the increase in price from the original in 2015 might be a little beyond expectations. 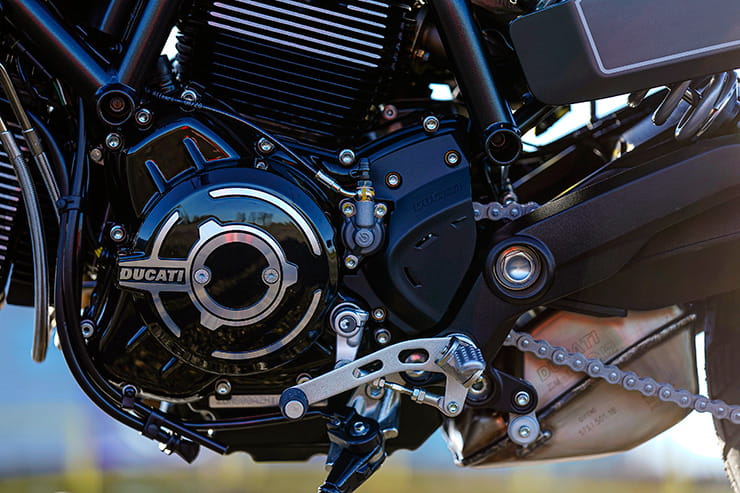 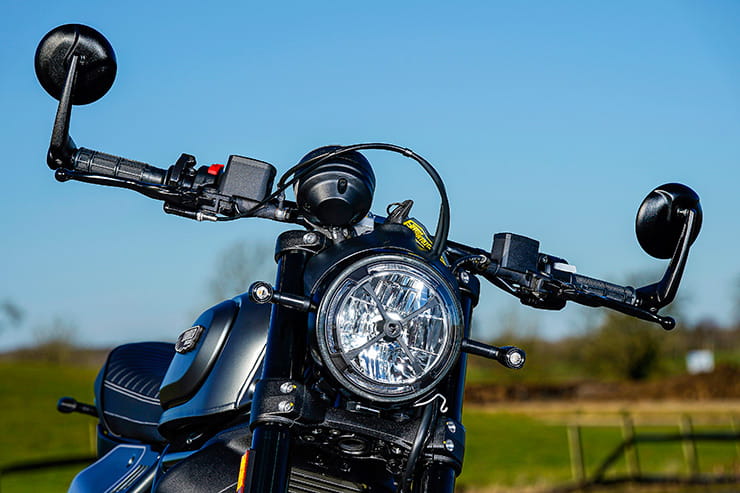 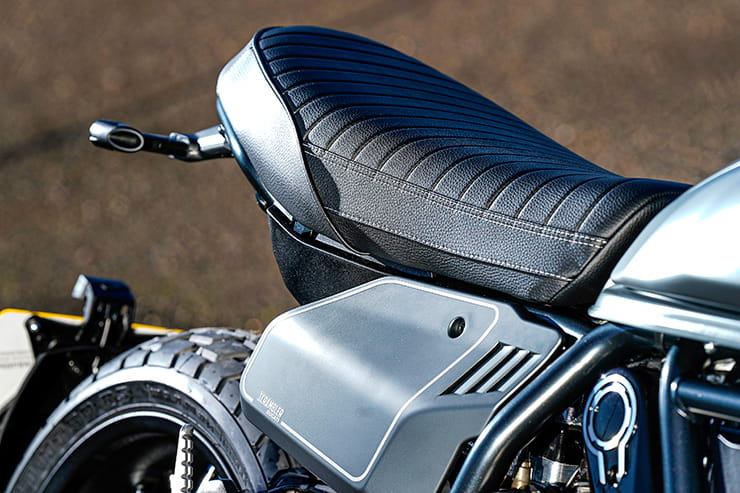 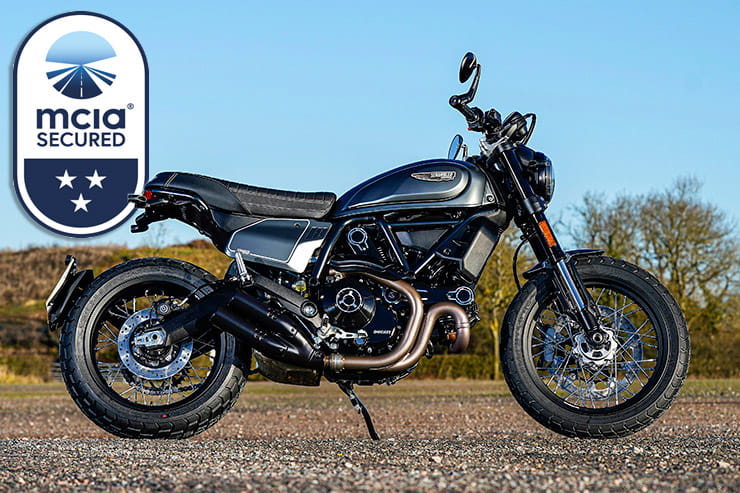