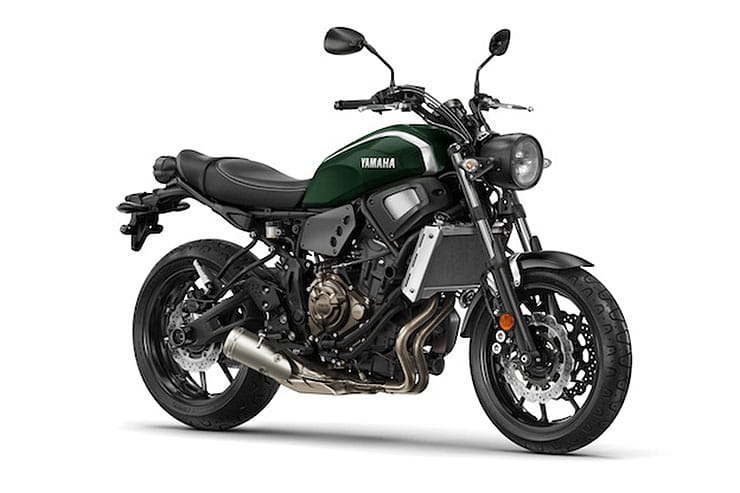 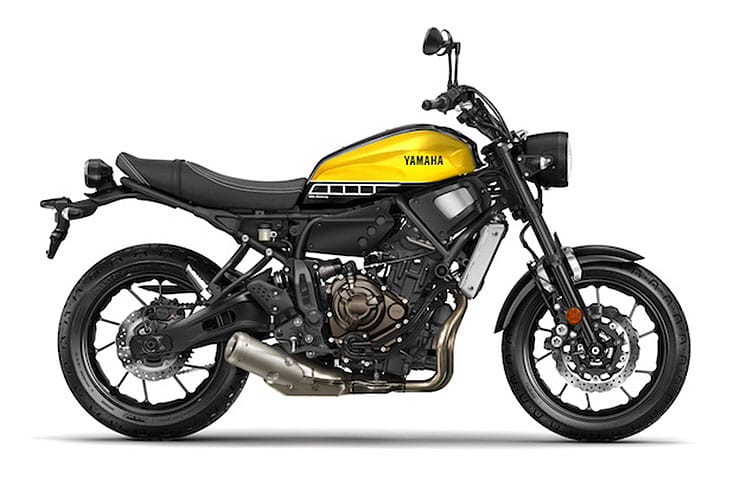 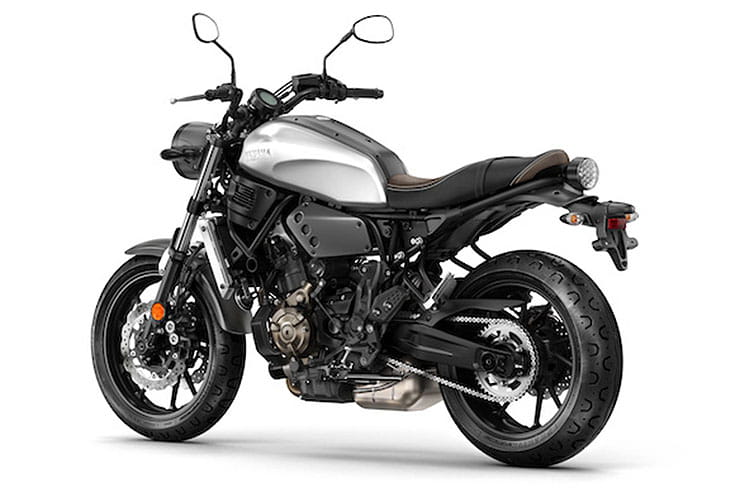 In 2014, Yamaha unveiled the MT-07, a versatile, lightweight, flexible-chassised, learner-friendly middleweight that punched well above its weight. It also appealed to the commuter, the more experienced rider who was after a bit of weekend fun…and pretty much anyone in between.

Priced extremely sensibly and oh-so-rewarding to ride, the MT-07 gained plaudits globally, winning several bike-of-the-year awards on its march to becoming the second best-selling bike in Europe in 2015.

The following year the Japanese firm announced the next string to their Yard Built / Faster Sons customisable bow – the XSR700, a bike that would mix all the good bits from the MT-07 with ‘retro-modern’ styling to create an exciting modern classic at home either in its standard format or as a base from which the owner is encouraged to create their very own, bespoke machine using any combination of the 40 genuine accessories on Yamaha’s shelves.

An additional version, the XTribute, followed in 2019 paying homage to the 1975 XT500 trail bike and featuring XT-alike paint and a more trail style ride with a new seat, higher bars and other subtle tweaks.

First impressions from the 2015 Press Launch

Launched at just £6249, or just £500 more than the then MT-07 on which it was based, the XSR was one of the most temptingly priced retros and a full £1000 less than Ducati’s Scrambler Icon. The XTribute version cost £700 more.

With exactly the same powertrain as the MT-07 on which the XSR is based, you’d expect Yamaha’s retro-styled version to have the same pace – and it has. The linear torque delivery from the 75bhp parallel twin is very smooth and surprisingly powerful in the mid-rpm range. The red line is at 10,000rpm but even rolling on the throttle in 3rd or 4th gear around the 5,000rpm mark at 50mph is very effective to achieve 70mph in no time. Don’t underestimate the 689cc twin, it packs a punch despite being housed in a cool, modern-classic frame. What’s more, and again just like the MT-07, an A2 restrictor kit is available reducing the power in accordance with the licencing regulations to a more humble 46.6bhp. 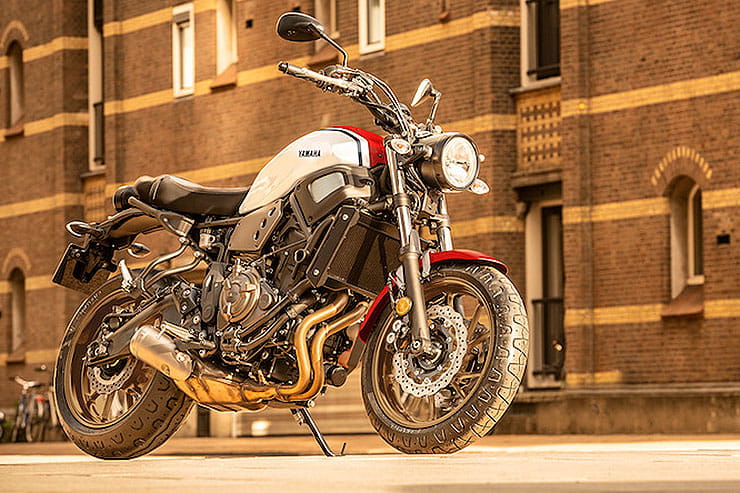 The XSR uses the same, torquey, 75bhp, liquid-cooled, parallel twin, 689cc engine from the MT-07 – which is itself was derived from the three-cylinder MT-09.

The gearshift is direct, short and without issue while the gear indicator is illuminated as part of the funky new round display.

The gear ratios are long in the XSR from 2nd up. The late bite point of the clutch lever should suit newcomers as should its lightweight feel. 3rd and 4th gear have a great range although 6th is almost redundant because it’s not necessary for anything other than cruising and that isn’t what this bike is about. An around-town commuter, a Sunday bimbler, a garage project, maybe. But certainly not a motorway mile muncher.

Yamaha claim figures of over 185 miles per 14-litre fuel tank but has also admitted that while these were homologation official figures from real-life testing, the roads were smooth and straight. After 120 miles of the riding launch, most of my fellow journalists were on or close to seeing that little orange light on the display. The European-spec digital display showed 5 litres per 100 km which equates to a claimed 47mpg. 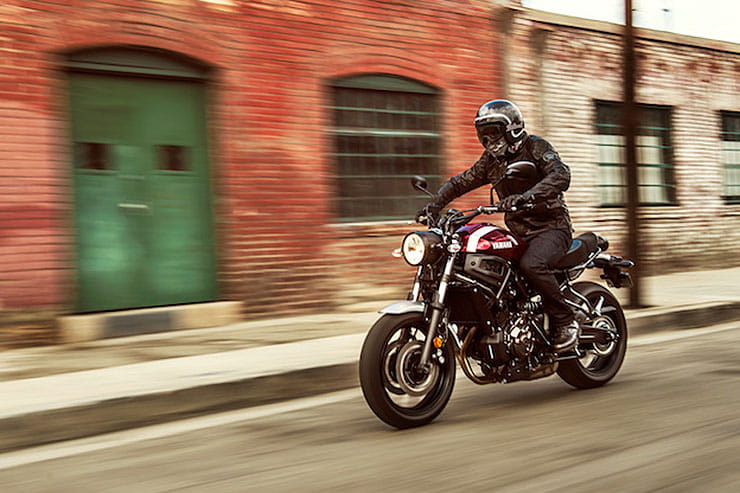 The frame is the main change to the XSR compared to the MT-07. The XSR700 uses its engine as a stressed member, incorporating it into its shape. This leaves no down or bottom tubes therefore reducing weight to 186kg, ready-to-roll. Although that figure is actually 4kg heavier than the MT-07 due to other changes, it’s still 40kg lighter than the current Triumph Bonneville, one of the Yamaha’s main competitors.

The subframe is also new and has been designed in such a way that encourages customisation. The same goes for components such as the front mudguard, which is only attached by four small bolts, and the aluminium panels surrounding the 14-litre fuel tank are easy to replace without disturbing the whole tank and pump.

The XSR’s suspension, with its 130mm travel both at the front with the telescopic forks and rear monoshock/swing arm link-type, looks a little budget. However, given the price of the bike, adjustable components such as these cannot be expected. That’s not to say they under-perform, far from it. In fact, given the condition of some of the roads I’d go as far as patting them on the back for saving my own back.

The XSR’s performance in the corners is excellent for a motorcycle not designed with this as its primary responsibility. Like the MT-07, it has quite the dynamic-handling chassis. Add that to the XSR’s new Pirelli Phantom Sportscomp tyres, which have a rather aesthetically pleasing tread pattern, yet proved themselves on a variety roads from pot-holed back streets to fast mountain sweepers.

In fact, only if you’re really hustling around the twisty bits would the hero blobs on the foot pegs meet Tarmac but there’s plenty of ground clearance and there’s no danger of it being the collector box or side stand instead. Again, that’s not the style of this bike, as fun as you might want to make your ride! 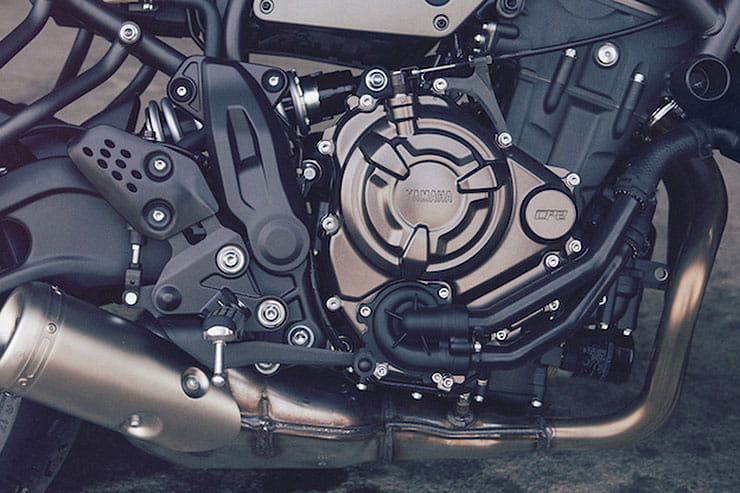 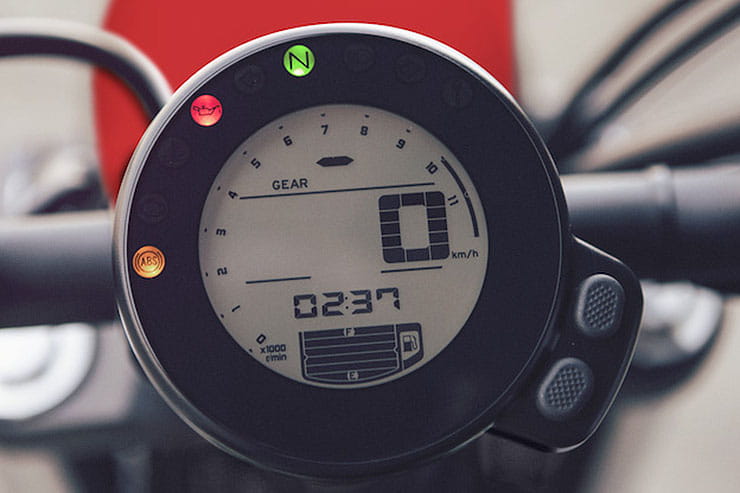 The XSR is fitted with twin, wavy, 282mm brake discs with Nissin four-piston callipers and ABS as standard. The sharp, reliable feel through the adjustable brake lever helps the already very effective engine braking to scrub the speed off.

The XSR700’s handlebars are repositioned more towards to rider in comparison to the MT-07 to encourage a more upright riding position thanks also to the XSR’s increased seat height of 815mm, 10mm higher than the MT-07.

This alternate riding position works in favour of the XSR and offers more leg room to taller rider. There’s also the narrow waist of the bike where the slightly pitched seat meets the fuel tank, again offering a decent position from which to move your weight as you flick the agile bike around the twisty bits. The tank is sculpted to hold your knees while the foot pegs and gearshift are ideally situated for a comfortable riding position.

The standard seat is a maybe a little firm for some tastes but only if you’re going to be travelling 100-miles or so in one sitting.

Yamaha also offer two official customised seats, although this isn’t a reflection of the standard seat. On the Garage Metal colour option, a two-tone brown seat looks the business with the other being Forest Green whose seat has a neat, sunken XSR700 logo at the rear. Just one of the nice touches that for me, stand this bike above the MT-07 for its more-refined appearance.

Although the XSR has no rider modes or electronic aids other than ABS and is also a fairly budget offering, there are plenty of impressive details which set it apart from the standard MT-07 while in addition Yamaha offers a fairly substantial range of 40 genuine accessories to offer an opportunity to those who are perhaps new to customising to select the parts they want.

So, compared to the MT-07, the XSR700 has a round, LED headlight and rear light plus a round and easy-to-read LCD display.

The Japanese firm has also created two recommended templates using a host of the accessories, both of which were shown at the press launch. ‘Fun Ride’ is in Garage Metal and features a flat seat, fly screen, chain guard and high Akrapovic exhaust. While ‘All Rounder’, in Forest Green, is equipped with knuckle guards, canvas side bags, fly screen and a single seat unit. 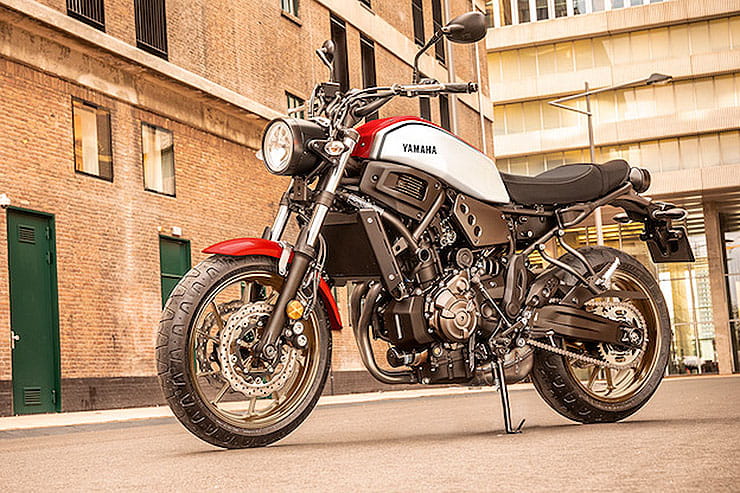 Although £500 more expensive than the MT-07 with no advantage in terms of performance (in the fact, the MT-07 received improved suspension in 2017 which wasn’t passed on to the XSR), the XSR has a strong appeal for combining all the fun and effectiveness of the MT but with far greater style, improved equipment and even a roomier riding position.

Thanks to Yamaha’s extensive accessories catalogue and determination to inspire customisation, the XSR is also a great starting point for home customisers. While those wanting an even roomier, slightly more ‘scrambler’ or trail style version are provided for with the special XTribute version which debuted in 2019.

Overall, as a fun, affordable middleweight with plenty of ‘on-trend’ scrambler style, there are few better – especially at the price.

Three things we love about the XSR700…