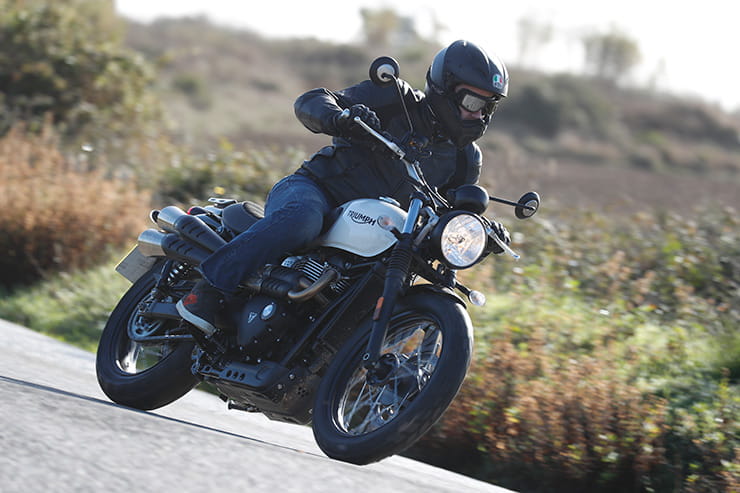 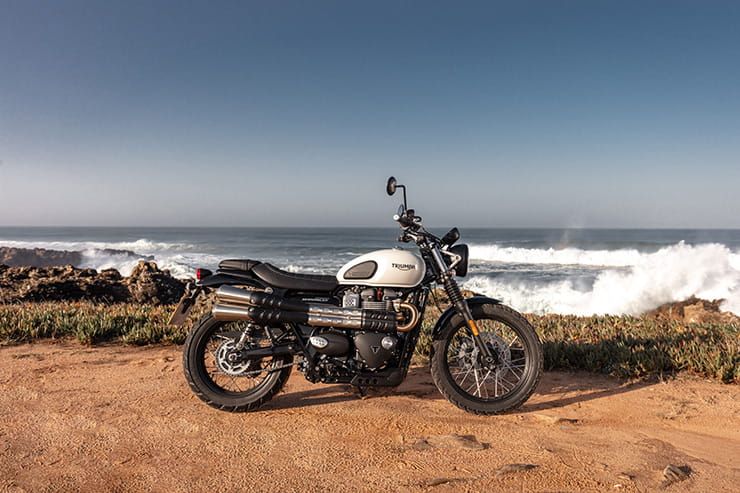 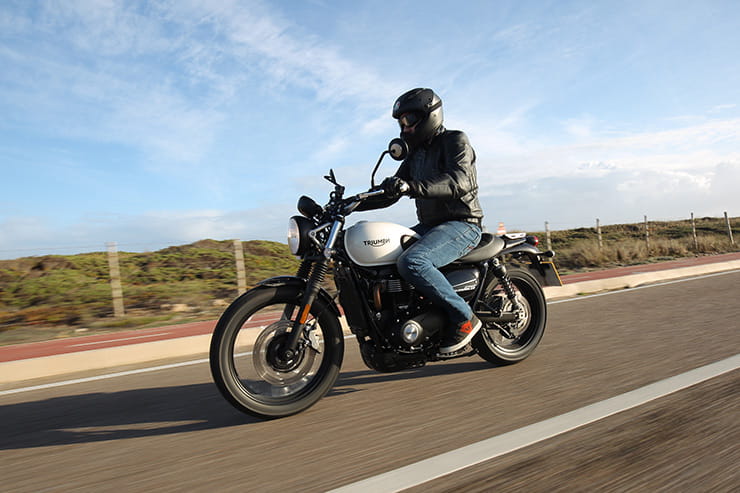 Triumph in the mid-60s was all about the scrambler concept, long before Ducati and BMW got involved with the scene, with the Bonneville T120C and T120TT, plus Evel Knievel and Steve McQueen flying around making everything look awesome. So, when the British marque gave us the McQueen-inspired 865cc Bonneville Scrambler in 2006 and its subsequent variations, its cool value offered the right kind of edginess for both small and large screen, having featured in Doctor Who, Jurassic World and with David Beckham in Outlaws.

The 900cc Street Scrambler came our way in 2017 and despite offering a terrific base from which to customise there was both a lack of engine power and front brake issues. Fortunately, Triumph's engineers went to their drawing board and said to each other, we need to make it better performing, better looking, offering a better ride and even more fun. They fiddled and twiddled and came up with this, the 2019 Street Scrambler, before offering us a ride at the International Press Riding Launch in Cascais, Portugal, alongside the revamped Street Twin.

Here’s a little video introduction to the two new models recorded at the press launch:

Three colours in the Street Scrambler range and they come with three different price tags starting at £9300 for the Fusion White that we tested on the press launch. An extra £150 for the Cranberry Red version and another £150 on top of that for the Matt Khaki and Aluminium Silver iteration which therefore comes in at £9600. This is still lower than the four main rivals I’ve picked out below and only £300 more than the outgoing 2017 model.

Three colours on offer for the Street Scrambler

This increase was needed as the previous 54bhp was never enough to haul a 200kg Scrambler-style machine around, especially away from the roads. Not only has the change brought an increase in performance, it hasn’t compromised the smooth throttle control and or personality of the motor. I still think another 10bhp on top wouldn’t have gone amiss particularly when compared to rivals 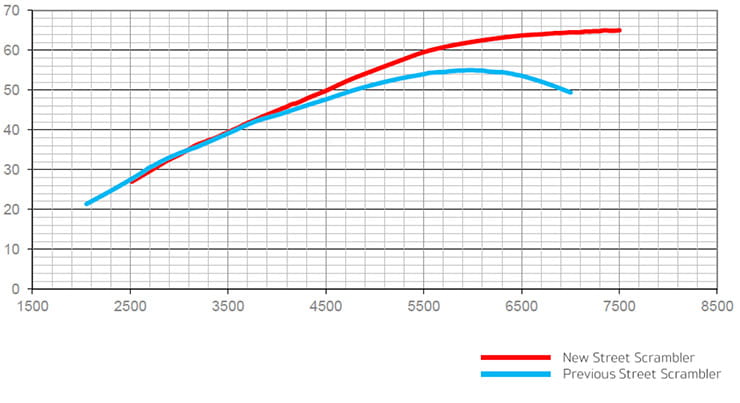 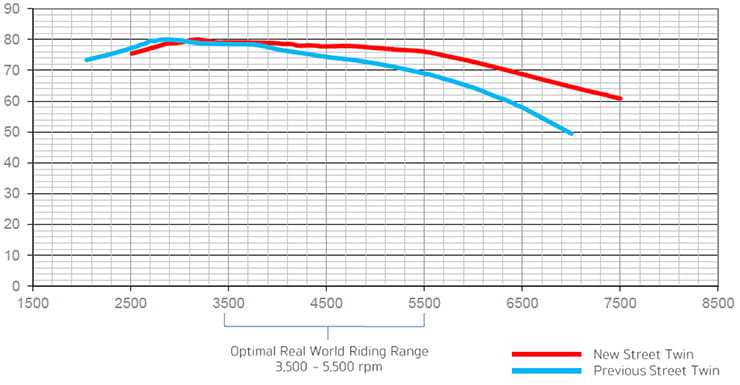 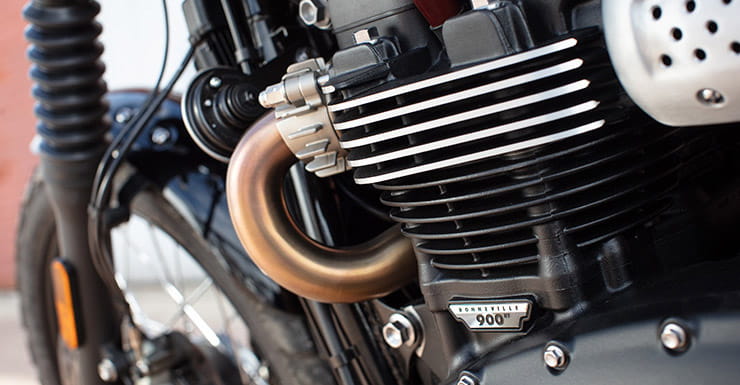 Power and torque figures vs. the 2017 model

The power of the Street Scrambler is delivered sweetly from the liquid-cooled 8-valve parallel twin nestled into the tubular steel frame, which, when coupled with a super light clutch action, offers a super user-friendly ride quality. Whether you’re new to motorcycling, stepping down from a bigger machine, or just plain lazy, the Triumph is a doddle to ride. Almost un-stallable.

Enhancements for the new machine come in the shape of a new magnesium cam cover and a new lighter weight crankshaft and balance shaft all of which contributes to a 3kg weight saving over the old machine. So that’s more power and less weight; the holy grail of motorcycle development. We’re surely onto a winner.

Feeling unrushed, the Triumph offers as pleasant a ride as its stablemate, the Street Twin. A bit of punch down low in the revs with well over 55 lb-ft/75Nm (or 93% of maximum) torque available from as little as 2,500rpm so to get away from stationary is simple while riding in the real world range of 3500 – 5500rpm offers a very linear torque feel with power picking up unobtrusively even with an invigorated twist of the right-hand grip. The engine is given its voice care of the eye-catching over-and-under high level, single sided exhaust layout. Your inner right thigh is protected from second-degree burns by the heat shields over the brushed stainless steel silencers.

It even has the same five-speed gearbox as the Street Twin. Even then, top gear is hardly required away from the dual carriageways because second, third and fourth allow you to use that lovely spread of torque across the rev range, even though on more than one occasion I found myself having to drop a gear to reward my right wrist rotation with the desired acceleration. There’s a solid and supportive clunk when each gear is engaged which belies the airy clutch touch, the meekest index finger twitch is all it takes to aid the change. 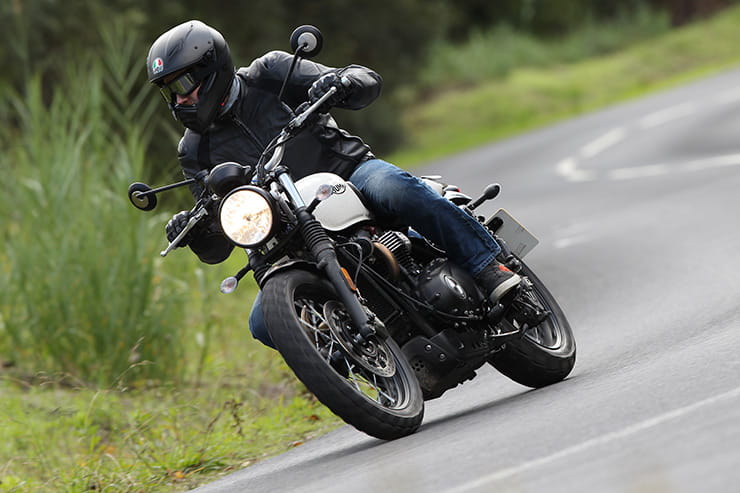 Claimed MPG is slightly down (3.5mpg less) versus the 2019 Street Twin down to the larger front wheel and exhaust layout yet the 900cc parallel twin still returns a claimed 68.9mpg from its little 12-litre fuel tank. After some exuberant riding on the 120-mile press test, I achieved an indicated 57.9mpg, the majority of the route was 2nd and 3rd gear twisties so I was quite impressed the average mpg wasn’t lower than it was.

You’d struggle to achieve much more than 140-miles from the tank before searching for the petrol station.

While the 19” front wheel and Metzeler Tourance ‘dual purpose’ tyres hint at off-road ability, and the Street Scrambler would easily tackle gentle trails and unsurfaced roads, this isn’t a serious off-road machine. Leave that stuff to the Tiger range or even the new Scrambler 1200 and concentrate on looking boss on the streets. Even Triumph’s official presentation mentions “light off-road surfaces”. That said, the Metzeler rubber had no issues holding onto the notoriously slippery Portuguese roads even when damp from the overnight downpour ahead of the ride.

New KYB 41mm cartridge forks assist with a comfortable ride yet offer no adjustable features. The only suspension adjustment comes at the rear on the KYB twin shocks and that would be for preload.

Steering is light and composed enough for a bike with a 19” front wheel allowing for an equally sturdy feel when dicing through town traffic or carving around the spectacular coast roads. Even though I keep banging on about it, the combo of riding position, throttle reaction, clutch feeling and build quality makes for a super sub-£10k option for those happy enough to ride around without a screen while keeping an eye out for their reflection in a shop or car window.

More than 120 dealer-fit accessories feature in the catalogue and range from sump guards, mud guards and slip on Vance & Hines silencers to heated grips, a centre stand and a host of luggage options. 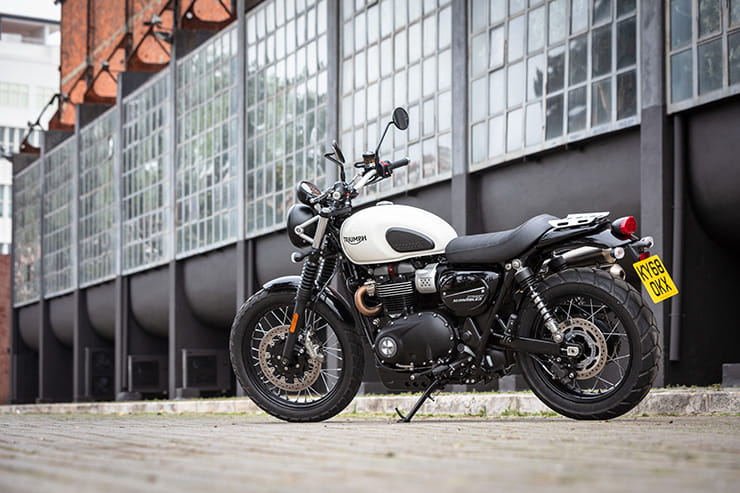 With more power comes greater responsibility and it’s a good job Triumph stepped up and improved the front brake. The extra 10bhp lead to the Hinckley firm upgrading the front caliper from Nissin to Brembo and thankfully it makes the required difference. There’s better initial bite but still not enough to make me think, wow these brakes are sensational. If the bike had a little more power then we’re into the realms of enhanced braking requirements either with a larger single disc or even the addition of a second one… which then means another caliper and more weight.

I digress. The 2019 Street Scrambler has more than enough stopping power for anybody not using it as a bank-robbing escape vehicle.

With a 30mm longer wheelbase than the Street Twin, the seat/footpeg/handlebar set-up is designed for an upright riding position that is ideal for my 6ft frame. The seat is low at only 790mm which is at least 20mm lower than any rival making it stress-free to swing a leg over and to stand with feet flat when stationary. It’s also cosy enough with a wide supportive lip at the rear of the saddle. Textile on the top and leather around the side while even being interchangeable as standard with the option of a pillion seat or aluminium rack. And judging from the demonstration, even a numpty like me could manage to swap it around in under one minute. 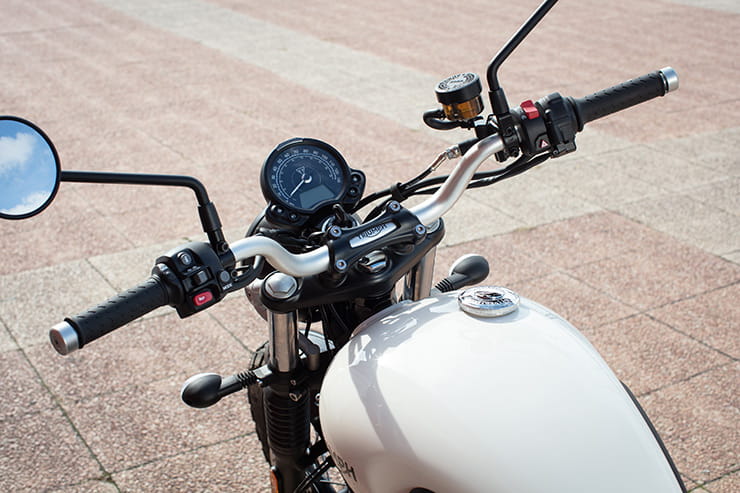 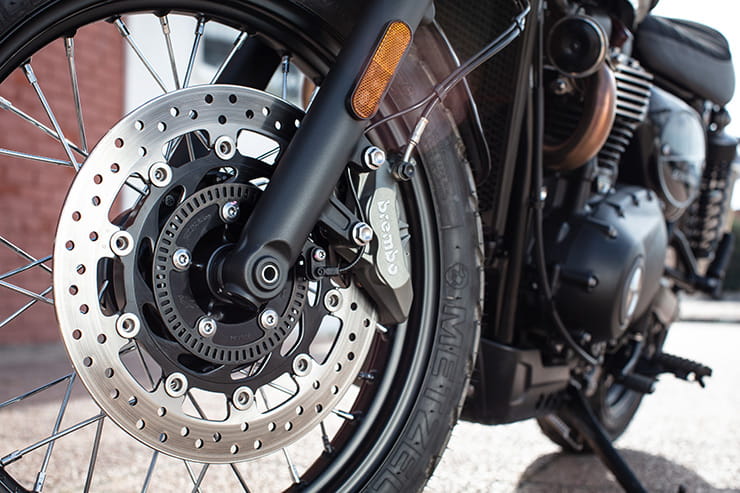 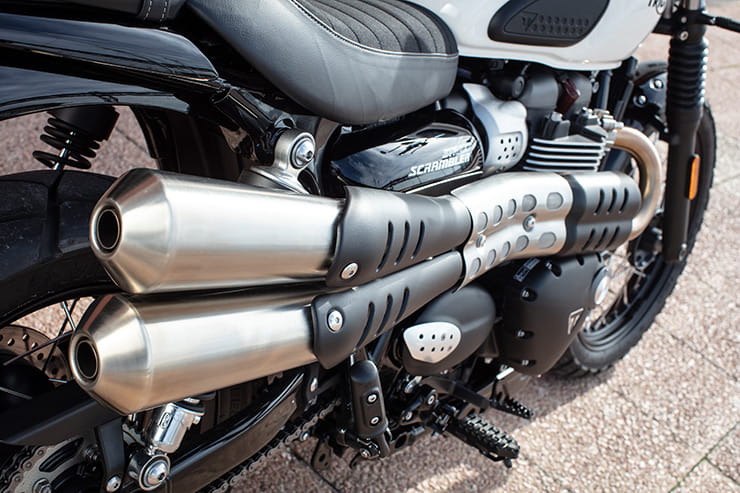 Build quality and design is typically new-age Triumph and little touches like the pillion seat options and off-road spec foot pegs plus the beautiful and typically Bonneville hidden cat run of the exhausts makes the model. Neat finishing touches throughout the bike can be taken for granted as well as non-exposed wires usually sticking out all over the place on rivals.

The single instrument clock has had a brush-up and contains an analogue speedo with digital rev counter that might not reach the echelons of modern day sports and adventure bike clocks but remain simple enough to see and use. Road and Rain riding modes offer the same amount of power but deliver it differently. Traction control settings are also affected. Then there’s an Off-Road mode too, which can only be activated when stationary but removes ABS and TC… known as ‘skids and wheelie’ mode among some fellow journalists.

The under-seat USB charging point is very handy and the fact that everything is operational via one of two buttons makes for further ease of use. 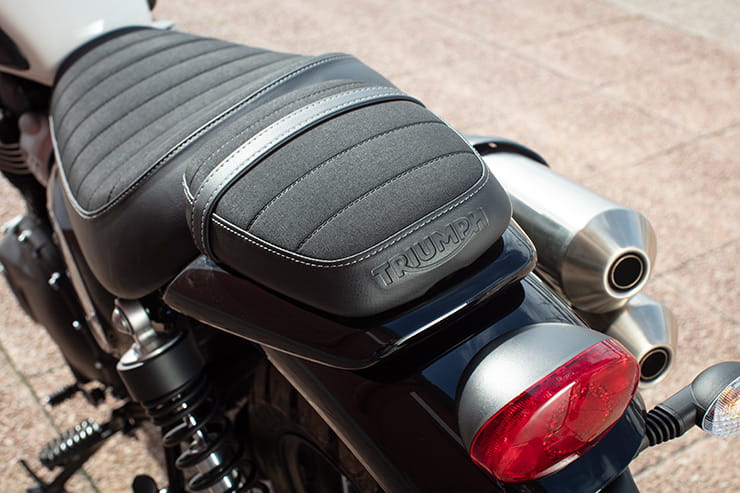 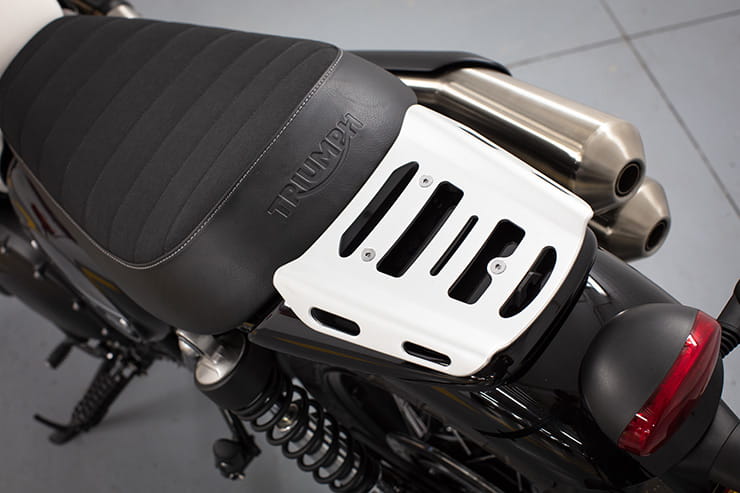 Picking out the top four rivals from the Scrambling category isn’t a simple job. Ignoring, at my peril, Triumph’s own forthcoming Scrambler 1200, Yamaha’s XSR900 and Moto Guzzi’s V9 offerings too, I’ve stuck with two Ducati’s, a BMW and a Kawasaki. 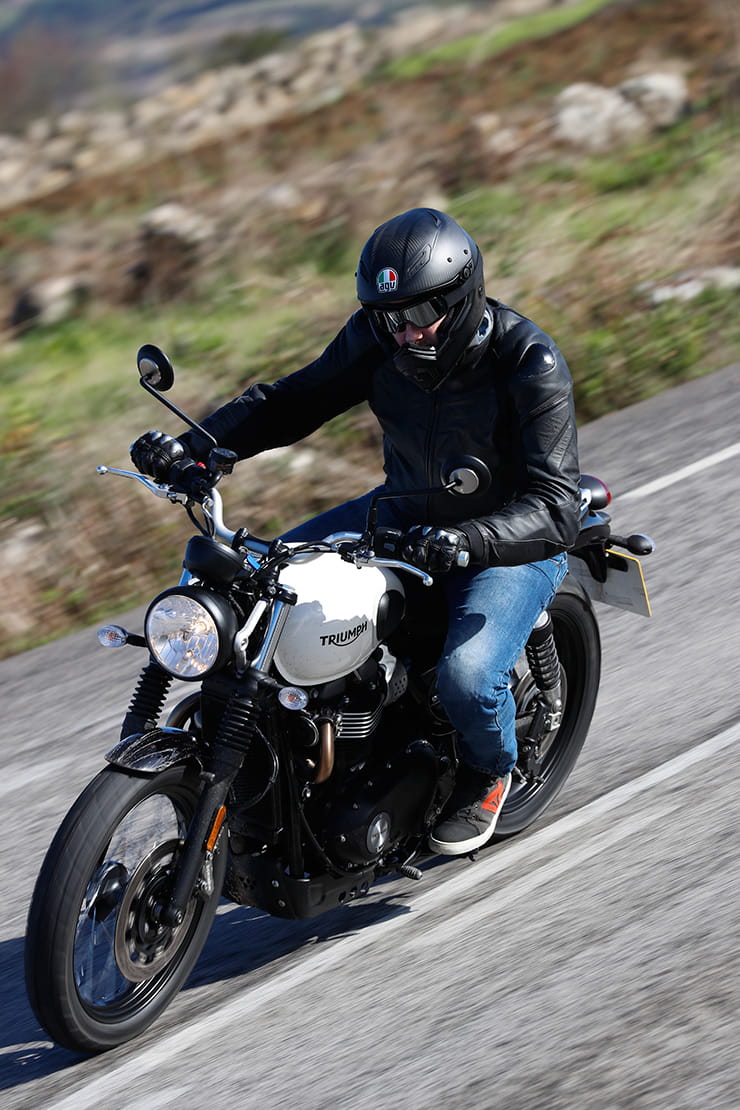 Aesthetically it might look very, very similar to the outgoing model but beneath lies plenty of upgrades to make the £300 price difference worth every penny. Headliners like better brakes and more power aside, it’s the sensible touches like wider spread torque, improved front forks and neat styling that add to its grown-up-ness while still being very easy-to-ride. So it has the class, finesse and ride quality while managing to look butch and strong and having the versatility of being able to conquer the (milder) green lanes too, putting the scramble back into scrambler. It just needs a touch more power to hold a torch to its rivals.

Triumph have triumphed with the Street Scramb...huh? What’s that? There’s a 1200cc version around the corner…

Three things I loved about the 2019 Triumph Street Scrambler…

• Styling fit for a modern-day hero

• A big, proper motorbike that is still accessible and A2 friendly

• No sump guard or heated grips as standard

• Non-adjustable seat height. A higher seat ought to be option at the very least. 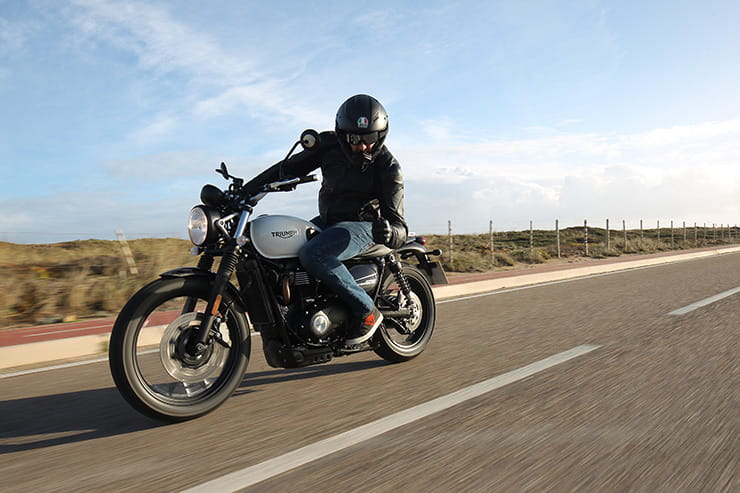