Does locking your motorcycle make it less likely to be stolen? 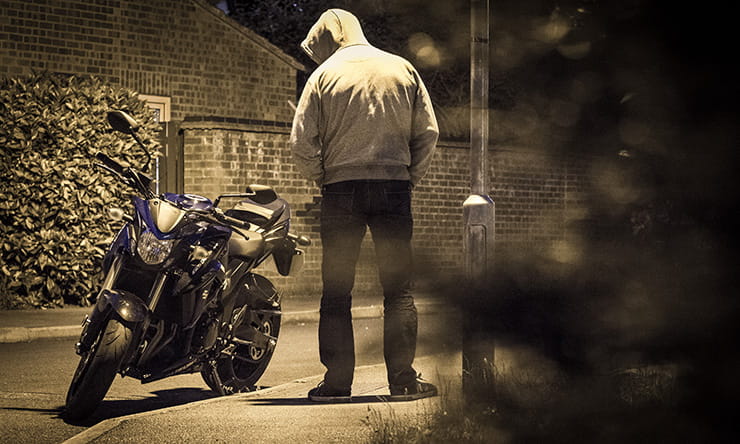 According to an investigation by the Motorcycle Action Group (MAG), the national average for motorcycle thefts in the UK is 22 in 1000, making bikes the most likely vehicle type to be stolen in the UK.

An even more scary way to look at it is that that’s 1 in every 46 – it means you’re 958,670 times more likely to have your bike pinched than you are of winning the lottery. You’re 212,766 times more likely that it’ll happen than getting struck by lightning.

What nobody else seems to have pointed out is that simply using a decent lock significantly reduces the risk of YOUR motorcycle being stolen. Don’t listen to people who blindly claim “there’s no point, they’ll cut it with an angle-grinder” – analysis of 12 months of theft data proves that’s wrong. The biggest threat to the security of your motorcycle is apathy…

First let's get those statistics straight...

Let’s look a little more closely at those initial MAG figures; add in Leicestershire’s late response with 21 per 1000 and Humberside’s 4 in 1000 and the average shifts to 18 per 1000; 1 in 56 – still a high number, though the average would be even lower if unregistered motorcycles were included too (like off-roaders). 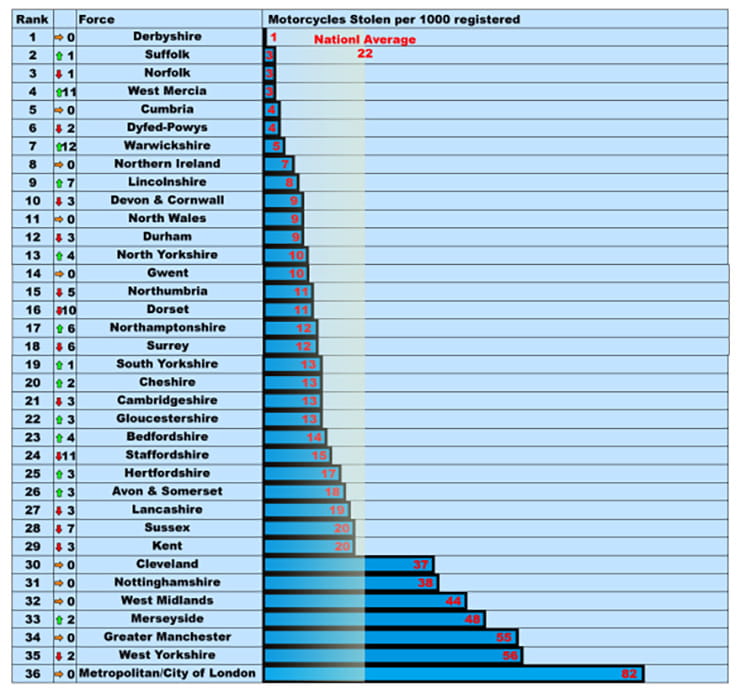 This graph was produced by MAG before Leicestershire and Merseyside Police submitted their numbers – the updated figure is 18 per 1000, or 1 in 56.

But that’s clutching at straws; maybe what matters more is that these stats are taken from all powered two wheelers, which includes scooters. In London especially there’s a big (but reducing) problem with the lightweight, low security machines being stolen for use in other crimes; the average theft rate in Metropolitan/City of London is 82 in 1000 (1 in 12), which pushes those numbers right up.

That doesn’t make it acceptable; in an ideal world there would be no thefts at all. But scooters and London in general skews things because – for a surprising number of people – a scooter or even a motorcycle is a cheap, almost disposable form of transport; it’s so much cheaper than public transport that if it does get pinched, many will just replace it.

Take out London and the average drops to 17 per 1000, or 1 in 59. Still a very scary number, and MAG is doing absolutely the right thing in raising awareness, but what can be done? Stiffer sentencing and more freedom for an increased police force would be great, but what happens to those stats if you lock your bike? It’s something any of us can do… 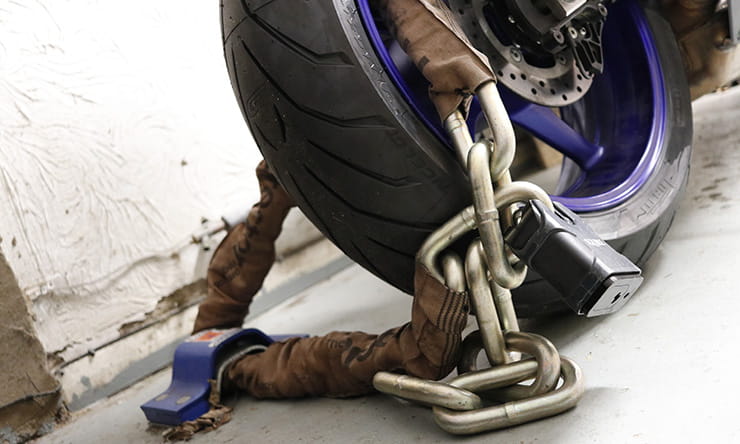 How do I stop thieves stealing my motorcycle?

Using the data from an average of around 225,000 insurance policies held by Bennetts Insurance between September 2018 and August 2019, 2,080 thefts were reported.

That’s an average of 9.2 per 1000, or 1 in 108. It’s significantly different to the MAG figures because the policies tend to be for larger-capacity motorcycles, with fewer customers in London.

But by using the data from Bennetts policies we’re able to get an idea of what security products people declared when they took out insurance.

Of the 2,080 customers who were unfortunate enough to have suffered a theft, 943 said they hadn’t used any additional security products.

1,137 people did declare additional security and 613 of them listed hard security products – from simple disc-locks to the heaviest of chains. While trackers massively increase the chance of a bike being recovered (and would have had an impact on the number of thefts reported to insurers), they don’t stop a bike being taken in the first place. Equally, Datatag can make a bike less desirable to a thief – and has helped bring down some big stolen bike dismantlers – but it doesn’t inconvenience a thief like a lock can.

That number includes some very lightweight disc-locks… in fact, fewer than 1 in 1,000 bikes said to be locked with the heaviest-duty chains were stolen. That puts securely-locked motorcycles at a fractionally LOWER risk than cars in the UK (1.1 per 1,000), based on data from Direct Line.

I’m not suggesting you can make your motorcycle un-nickable but investing in the best security you can afford – and using it – really will significantly drive down the odds of you losing your bike. Read our destruction test reviews of the best security products; choose wisely and get on with enjoying motorcycling.

Don’t forget that Bennetts Customers can save up to 20% on some of the leading security product through their exclusive Rewards shop.