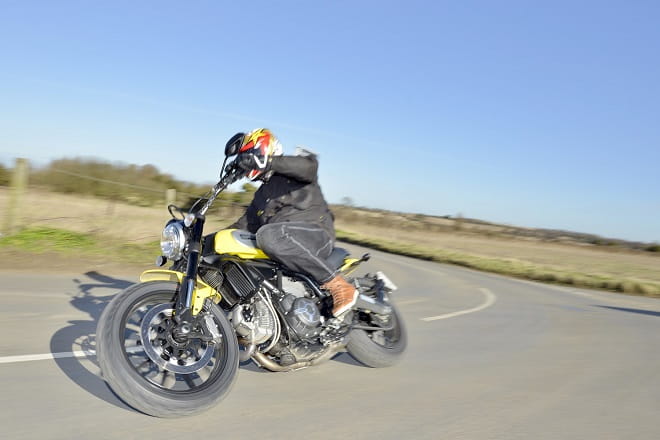 It's not California, or the land of joy. But the Scrambler is still pulling a crowd on a breezy, ice cold day in Sunny Hunny on the English Norfolk Riviera.

The marketing campaign for this bike has been so strong there can't be one person on earth who doesn't know about Ducati's Scrambler and the Land of Joy. Sorry, #LandofJoy. It's drawing a crowd in the whipping wind. A ray of sunshine in a bleak, run-down British seaside town where the only change of a 'Kiss me Quick' hat today is if it's woollen and comes with gloves.

The new Ducati Scrambler is a bike that recreates the vision of the original Scrambler launched in 1962. They were 250s, and 450s, lightweight dirt bikes.

This one uses an air-cooled 803cc V-twin Monster motor in a light-ish weight chassis with Scrambler styling, stripped-back looks and Scrambler tyres.

The whole marketing campaign shows shots of beautiful people having good times on Scramblers, hanging out in the wilderness, riding on the beach, and skinny dipping in the sea.

It's about good times. Simple times, when bikes were basic and life was good. Importantly it evokes what Scrambler stood for, so much so that Ducati are calling it a whole new division of Ducati, called Scrambler.

Plenty of my hardcore motorcycling mates don't get it, or the whole hipster scene for that matter.

They haven't got beards either. I have, but that doesn't make me a hipster. Put simply, I like motorcycles. And when a bike is this good-looking, lovable, easy to ride, attracts new riders, and is fun to rip around on, what's not to get? You don't have to be a hipster to enjoy cool motorcycles. Cool motorcycles are for anyone to ride. The Scrambler fits that brief perfectly.

For new riders it's incredibly aspirational. For example, in an office full of plenty of non-motorcyclists it was the Scrambler that made them run outside and sit on when it arrived this week. A Kawasaki Ninja H2R outside wouldn't have got the newbies out of their chairs but the Scrambler weaves its yellow magic and draws people in. 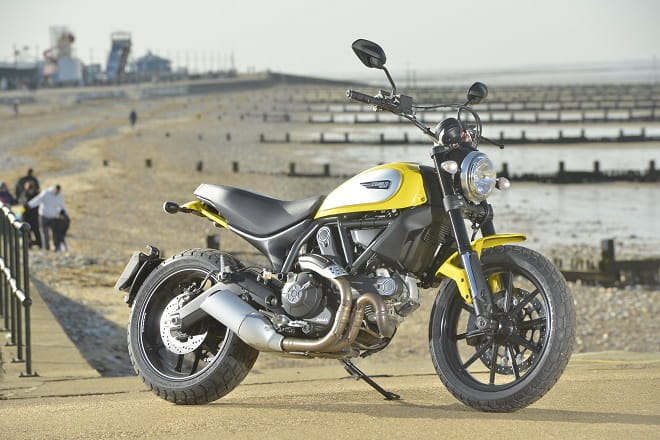 For older, more experienced riders like me it's a hilariously cool 75bhp motorcycle that'd be in my garage as a toy.

As my only bike it wouldn't quite cut the do-it-all nature that I need from a bike. But if I could afford one as a second bike and was in that lucky position, I'd be in like a shot. I know plenty of people in that situation who already have a Scrambler as their toy.

Whatever Ducati say, this is a Ducati not a Scrambler by Ducati. It's made in Bologna, Italy, the heart of the Italian manufacturer and it has a Ducati motor, but I get what they are trying to do.

As is the way of silenced motorcycles and Euro emissions laws, the Monster's traditional Ducati roar has been softened to more of a friendly 'Faf. Faf', but the noise is pleasant.

It's easy to ride around town and even trying a few things like a new rider might do, it doesn't complain. It only makes 75bhp so is never truly exciting, but it's spirited.  Fun. You can be ham-fisted with the super light clutch, bang through the gears and it copes. It will even pull top gear at 30mph without trouble, I tried it, in the interest of new riders.

The brakes too are easy. If you're a quick rider you'd be asking for another disc. There's only one big 330mm disc and a Brembo four-piston caliper. It stops, it has good feel. What more do you need?

There's ABS too and it's great to know it's looking after you and is a brilliant sell for newer riders. For older riders, just use it to find the limits of braking.

And that's what the Scrambler does. It encourages you to kick-back and take your time, but then not shut-off for bends.

The handling is predictable, and despite initial worries from those fat trail style Pirelli MT60RS tyres they worked well on the bike.

There's not enough power to unstick the rear tyre on power alone, and there's plenty of feeling from the front. It's child's play to chuck around and in town there's so much steering lock. More than any other Ducati I can ever remember in fact. 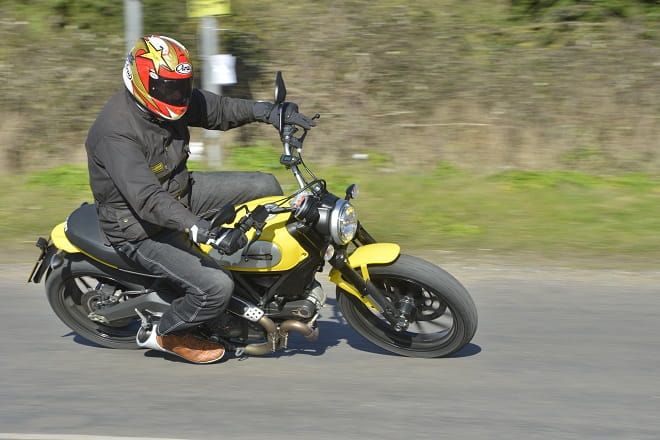 The front tyre starts to move around when you're on the ragged edge, but not that anyone riding one of these will ride it that way, and if you do then the exhaust heat shield eventually grounds-out on  the right-hand side.  That's your early crash warning.

On the move the roar from the deep treaded tyres reminds me of a Land Rover Defender. In the wet the tyres are cut just like old racing wets and clear water well giving loads of feel in slippery conditions. The bike generally gives any rider confidence in tricky conditions.

At 75bhp it's not the most powerful bike you'll ever ride but is quick enough. Short shift through the gears and don't over rev it and the motor is perfect for its job. It's torquey and easy going, exactly how it should be.

Shift lights on the single dash even tell you to shift. But the motor doesn't appreciate it, and really shifting around 8000rpm is enough. Interestingly, the single clock that doubles up as a speedo and odometer, air temperature read out and rev-counter has a 12,000rpm limit. Revvier Scramblers on the way at a later date perhaps?

On a back road the motor is flexible and short-geared to the point where I kept going for another gear sometimes, and had to check it had six gears. But on a run the motor chugs along straight roads holding 70-80mph no problems. It will run up to 120mph even with an over-sized rider wearing bulky winter kit and a rucksack if needed. Apparently.

That motor is fuel efficient too, pulling 150 miles out of a tank regularly, and registering 53.8mpg average during our test with the bike.

Most of the time I spent under 70mph kicking back with the wind blowing on my chest, my arms wide apart on the dirt bike style bars and thinking of riding around on classic bikes.

The difference between this and a classic is that this has the right look and feel without the maintenance or faults of a real classic yet is as easy to ride as any modern motorcycle. And you know it's going to start, not vibrate and not blow-up!

And at 790mm the seat is incredibly low so anyone can ride it. The Monster 796 which the bike takes this engine from sits a bit higher at 800mm seat height.

Faults? The suspension can jolt on some bumps that more expensive forks and shock would cope with, and you can feel it's not top-end kit, but this is an entry-level bike and works fine most of the time.

The black anodised 41mm Kayaba upside down forks look great and on this bike that's most of the picture. The Kayaba rear shock (preload adjustable only) is more than up to job and feels fine, but doesn't soak up bumps like the finest Ohlins would, it's built to a price and I'm fine with that.

It's good enough and ahead of the damping levels of similarly priced rivals.

The seat too is way too firm. I'll give it the benefit of the doubt as the bike had only done 600 miles on test so may bed in a bit.

Generally the fit and finish is good, the tank details with removable aluminium panels are beautiful, the paint deep, and touches like the offset digital single clock and the 'Born Free since 1962' logo on the fuel filler cap make it feel special.

Look closer and there's aluminium covers on the engine cases, a unique LED headlight and dual-sport wheels. It even has a USB socket under the seat to charge your phone from. The level of kit and attention to detail for this money is incredible and it comes with a two-year unlimited mileage warranty.

Anyone worth their salt would dump the standard can and upgrade to one of the many offered in Ducati's Scrambler catalogue, but that's the idea of this bike. It's a brilliant entry-level, stylish and cool motorcycle that you can build on and make your own.

Four versions of the Ducati Scrambler are available including the Icon, Urban Enduro, Classic and Full Throttle. There are some brilliant finance deals on them too from as little as £99 a month.

For more go to Ducati UK and have a look at their TriOptions schemes. 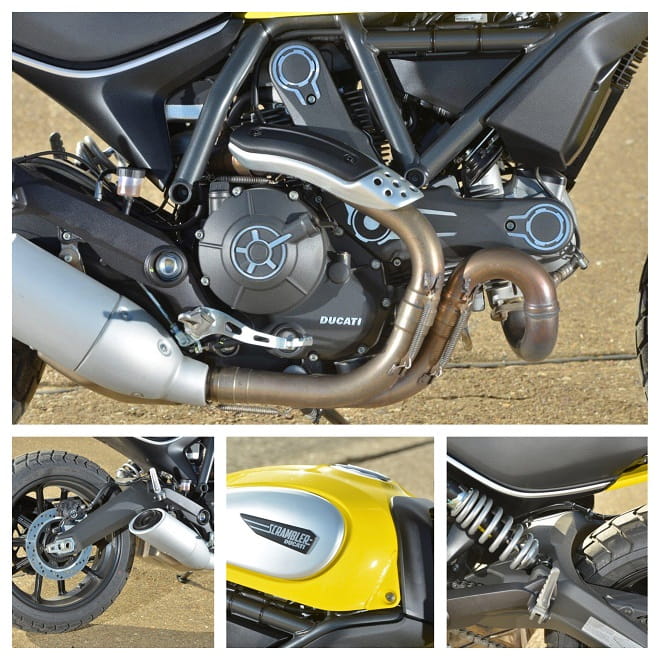