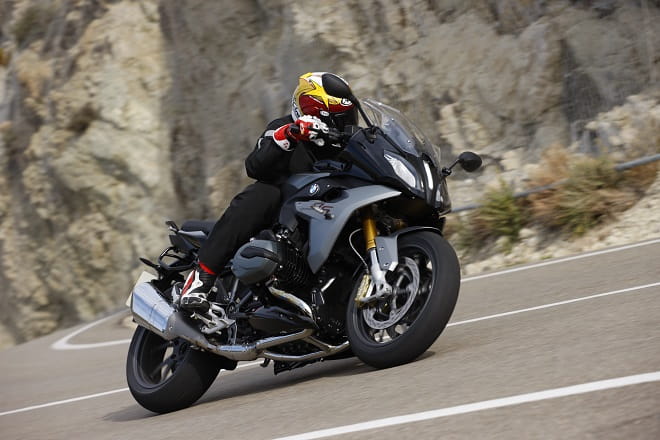 What actually is a sports tourer in 2015? You'd be right to ask that question. They've been through a bit of a change in the last twenty years or so.

Back then motorcycles like the Honda VFR and Honda Super Blackbird fulfilled the role of a fast bike that could cover ground relatively quickly, in complete comfort. Hence the sport tourer tag. Get it?

Through years of incredibly capable sports tourers like BMW's own R1150RS of the early 2000s, the BMW R1200ST, and ludicrously fast 186mph bikes like ZZ-R1400s and Suzuki's Hayabusa, thousands of us were happy to sit on a fast bike that could carry a pillion in relative comfort and looked a bit like an overweight sports bike. They were big bikes, big sellers, and we laped them up.

But in the last decade the role and definition of the traditional sports tourer has been overtaken by the adventure bike. Tall, long-legged, fast and comfy bikes which offer an alternative view of the world from their high riding positions, decent performance, and luggage carrying capacity.

It's no accident that BMW's R1200GS has been the best-selling big motorcycle in the UK for as long as any stato can remember, and has become a style icon for its duck billed front-end. 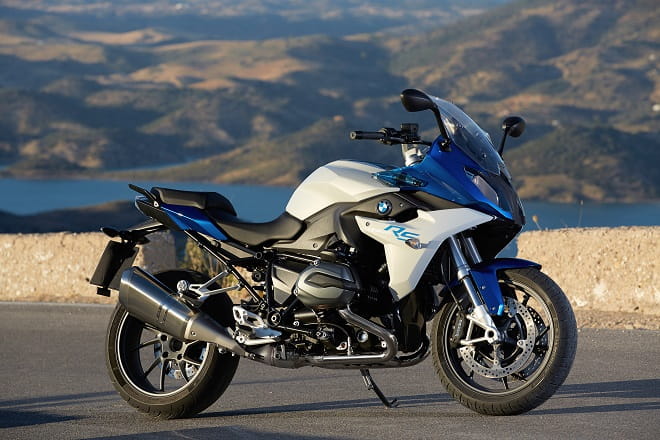 But BMW isn't letting the GS have its own way and the German superpower want another slice of the touring market. With a retuned 1170cc Boxer twin motor making more torque than the R1200GS in the mid-range, an all-new chassis, and the comeback of the RS name best remembered from the 1976 BMW R100RS. The BMW sports tourer is back in a big way.

This is the new BMW R1200RS. With the emphasis very much on sport, hence the headlights and front-end styling which mimic the brilliant BMW S1000RR superbike, and that BMW Motorsport colours paint scheme. And yes, it does Tour too.

We were lucky enough to get a go on the bike for a full day at its launch in Mojacar in Spain, and found it to be a sweet handling rapid motorcycle that can ride with some of the fastest bikes on the road. At first the bike felt a little bit flabby, not quite as lithe as its specs and purpose may suggest, but get dialled in, pile the miles on and the BMW just gets better and better.

Sitting somewhere between the big fully-laden BMW R1200RT and the naked BMW R1200S, and not forgetting the BMW R1200GS, the new RS is a big bike. Weighing in at some 235kg wet, it's just 3kg lighter than the fully-fuelled R1200GS, but that has a bigger 20-litre tank compared to the 18-litre tank on the RS. It has its own chassis, with a 1530mm wheelbase, a 62.3 degree steering head angle and proper upside down front forks.

BMW seems to be quietly losing their traditional Telelever front ends in favour of traditional fork setups, and theyre no worse for it. We've seen it on the R1200R, the RnineT, and now this. Combined with optional Electronic Suspension Adjustment (ESA), and it acts like a good handling bike. Just to be sure, BMW can make it act like a normal fork under acceleration and cornering, but dial in the anti-dive properties of the Telelever front-end too. That's the joy of electronic suspension. 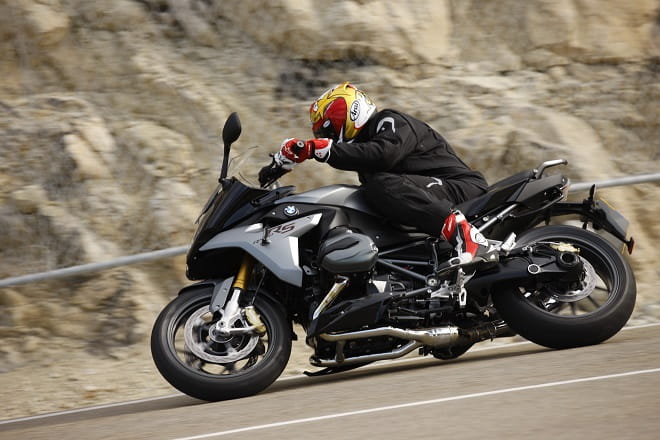 At first the bike feels a litte bit nose heavy as we ride through the town of Mojacar along the coastline. High rolling surf crashes on the rocks and it's easy to get distracted, but the BMW is dead easy to ride. There's smooth fuelling at any revs, in either of the four riding modes available - Rain, Road, or Dynamic. Rain cuts the power, gives a less aggressive fuel map and increases the traction control for wet weather. But it's not something I need today in the Spanish heat.

The Road setting or Dynamic setting gives full 125bhp power, and they all work well. None are edgy or sensitive to the throttle, though a couple of journalists fancied rain mode.

And in all honesty there doesn't seem to be much difference between the Road and Dynamic modes. Like the fuelling, the suspension too can be adjusted for either comfort, road or dynamic settings. Each click of the button makes it softer, harder or stiffer.

In town over speed bumps, just dial in the road setting for a nice plush ride. But out of town it's Dynamic all the way as the roads gets twisty and I try to keep two-times TT winner Steve Plater in sight. He's our guide for the day on a BMW R1200GS. The roads near Almeria are some of the finest in Spain and we make full use of them. 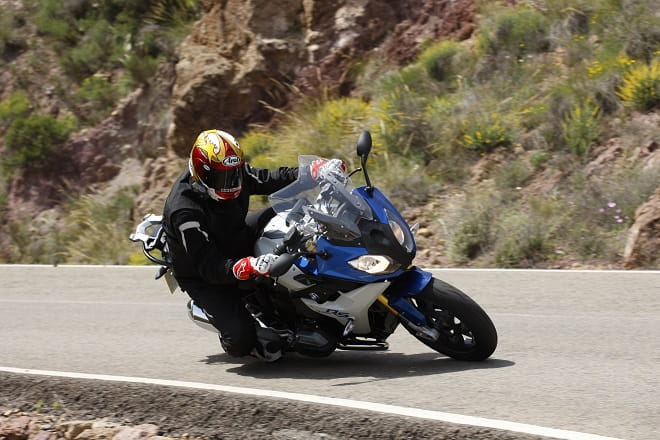 Fast switchbacks, second gear hairpins, and stunning views. As it opens out you can feel the extra torque and punch of the motor. It's smooth, and strong from about 5000rpm. Keep it around 5000-6000rpm on the pipe and it's punchy right up to the 9000rpm limit.

And when it's on the pipe it sounds great. There's a nice, deep mechanical rasp that's textbook Boxer twin.

The 125bhp output is more than enough in the real world and it makes light work of the Spanish roads. On fast dual carriageways and motorways there's a nice chug of torque at 80mph and around 5000-5500rpm, which lets you wind it on and pass cars quickly and without dropping down the box.

Change down and make use of the Gear Shift Assist Pro system and it sounds fantastic - popping ever so slightly on the downshift, or upshift which can be done without using the clutch. With the BMW system you shift down with your foot, close the throttle and get a nice blip of the throttle as it slots down the box.

Ride faster, brake hard and then bang down the gears on the way into corners and the rear moves around a little but it is never any trouble. The gearbox isn't the slickest but it's no worse than other modern Beemers. On the upshift, use the revs and change gear without shutting the throttle. It works great. This isn't a sports bike, but it pretends to be on occasion and works well.

With BMW and Ducati now using a similar system it can't be long until we forget about the clutch altogether.

On twisty roads I found the standard one person electronic suspension setting a bit soft for hard riding, so opted for two people setting which gave it much better turn in as it lifts the rear of the bike up, and helps give more feel, and makes the RS hold a line better.

From turn-to-turn the bike isn't sports bike quick to steer, but it's fast enough, and the more I rode it the more I got confident with it. Hustling along till the footrests, or the optional centre-stand scraped.

Get it on its ear in a corner and you can fully trust the brilliant traction control system fitted to the Sport and Sport SE versions.

Not once did I have a slide from the Metzeler Z8 tyres fitted to my bike. They really suit the bike's nature and after three laps of Almeria circuit at a fairly rapid pace, they still felt good.

Okay, so it's not a track bike, but it's not meant to be, but the R1200Rs can hold its own in some fairly hefty company. You can ride it hard on the road and its always feels like you're in a safety net. On the way out of of corners the electronics look after you. On the way into corners the brilliant Brembo brakes have a strong feel and the ABS helps you ride faster, rather than hinder spirited riding.

So that's the Sport bit, but what about the tour?

On the launch the assembled journalists and I rode for around 150 miles in one day on the bikes. Not once did I feel uncomfortable. There are optional high and low seats for shorter or taller riders too. But I'm six foot four and didn't feel the need for the higher seat.

You sit in the bike and the tank and its anti-scratch aluminium centre strip sit you deep in the bike. The TFT clocks which use the same technology as the latest mobile phones and they show everything you can think of from fuel consumption (50mpg when riding nicely, 38mpg when riding hard), to all the various modes and electronic suspension adjustments. You can change the displays too to your liking.

There's a digital rev-counter and a traditional dial speedo which some people found tricky to read. You can dial in a digital speedo on the dash too if you prefer.

The screen is adjustable four ways, it has two settings. Two for the bolts so you can choose either higher or lower and then screw them in and you can adjust it on the move by pulling it up or down.

I could have done with an even higher screen, but it was so windy the day we tested that it was hard to know if it was doing its job well or not. But I certainly didn't have any issues with it.

On longer runs it makes sense to use the various settings and get the suspension set-up just how you like it and make it more supple than the Dynamic two-person setting I opted for most of the day. Dial in road and one person and it floats along the motorway in comfort, at speeds of around 100mph with ease.

You could definitely cover a lot of ground fast on this bike, and a quick ride on the pillion seat suggested that it's good for pillions too with decent grabrails. 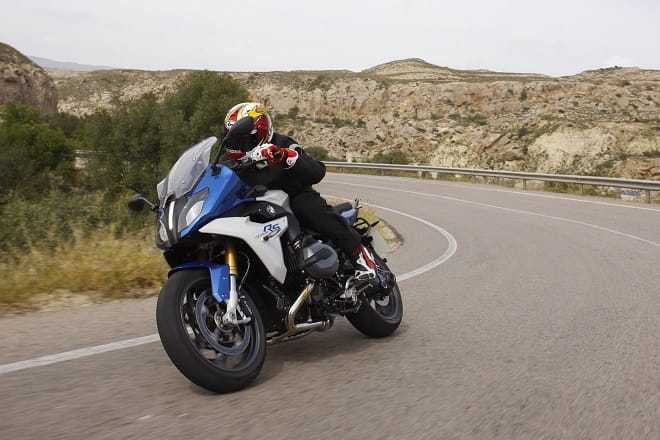 When the BMW R1200RS was first revealed at the Milan motorcycle show last year I was very excited stood in the press scrum as they pulled the covers off. Here was a lighter, better handling version of the GS that was still big and comfortable, I thought.

On my first rider early in the morning, the RS seemed to lack a bit of the zest and excitement I love about the RnineT and the R1200GS.

But, the more I rode the R1200RS the more I liked it. At first it felt a bit heavy at slow speed, but the more I got used to it the more I enjoyed its incredible high-speed stability and its confidence in corners. It's a big, comfortable bike that is a real joy to ride fast on some of the most challenging roads in Europe, yet is happy at high speed on the motorway too.

On twisty roads the motor has more than enough power and grunt, and it sounds ace too. It's way more interesting to ride than Honda's VFR, and a lot more lively than BMW's R1200RT, yet doesn't fall short of some of the RT's comfort or luxuries. It's a great bike that can do anything you throw at it. You could even do a track day on it at a push. Two-times TT winner Steve Plater, who also used to race the BMW Boxer Cup bikes even thought so.

The definition of sports tourer may have been through a lot of change, but fundamentally is still the same in 2015, and the BMW R1200RS fills that role perfectly.

It's a motorcycle that is happy to cross Europe, or nip out with your mates for a Sunday blast and still make you come home with a stupid smile on your face, or even take the other half out for the day. And it does it with Panache. Great work BMW. 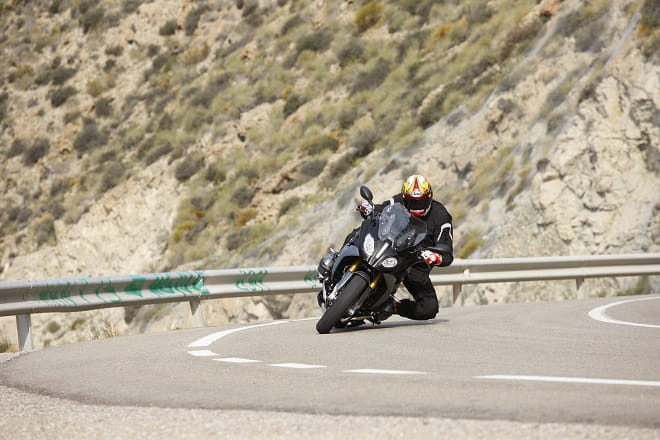 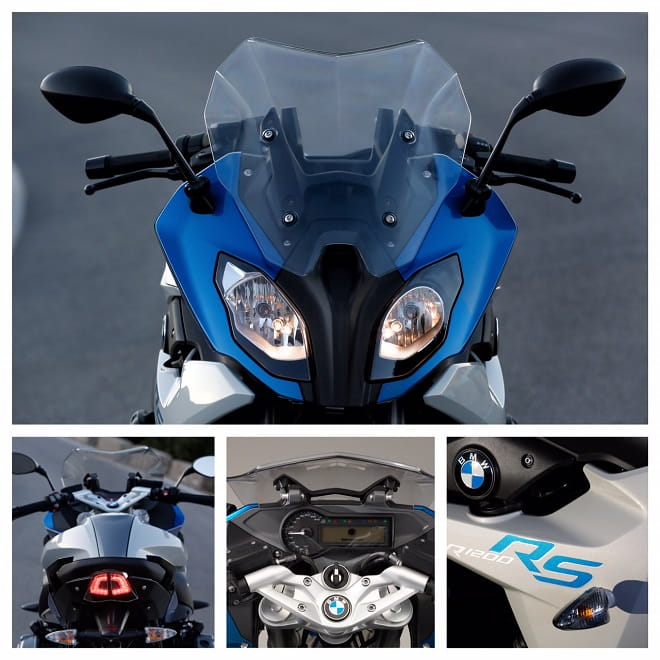 Available from 20th June although customers can collect pre-ordered bikes from 16th May. 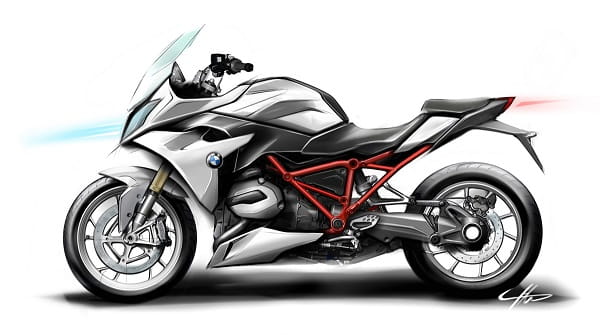