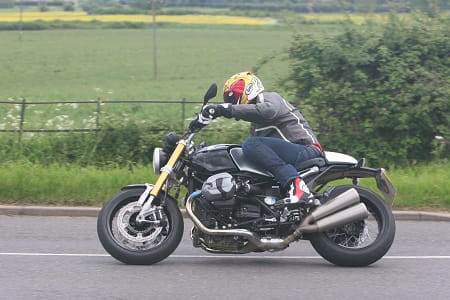 Take it to the Bike Shed Event in Tobacco Dock in London I thought. Yeah, a leather jacket, an open face lid and goggles, and a weekend run down to London town. That’ll do it. That’s the place to get the kind of reaction I wanted for the RnineT, right?

A land full of London hipsters looking for modified bikes, wearing £180 jeans and supping on artisan coffee froth, all with a single purpose – to go and talk, kick, chat and stand around the new wave of modified bikes. It’s what the BMW Rnine T was designed for. Wasn’t it?

A bike made to modify, to celebrate the soul of the new wave of modifying world. It's complete with a removable rear end as standard that you can unbolt to give that stubby look. The kind of bike that a tool roll above the front mudguard should come as standard, with a check shirt and a funky beard as optional extras. Talking as one usually sporting a beard and a check shirt, I can say that.

It’s built to celebrate BMW’s ninety year anniversary of building motorcycles. They even launched the RnineT by giving the bike to some of the world’s top hipster bike builders, guys like Roland Sands, and then asked them to give it a going over and create their own version of the bike. There are also currently five of the bikes sat with Japan’s best custom bike builders, tasked with creating their own vision of the RnineT.

And just as I was about to head to London for the Bike Shed Event, I read the Bike Shed’s article again on Bike Social again. "Built, not bought" is most definitely the way to the Bike Shed’s heart. And so deflated, and with a vision of moustachioed-waxed thirty somethings chuffing on cigarillos firing expensive foreign bottled beer at me for not showing up on something made in my shed, I bottled it. And got the train.

But the RnineT is something different again. Secretly I can imagine guys like top customiser Shinya Nakamura and Roland Sands digging the cheque BMW presented them to be part of their PR campaign, but secretly sniggering behind closed doors and not really digging the bike. But we’re not some of the world’s top new wave custom bike builders. We’re riders who want something cool to ride around on that we know is going to start when we push the button. For that, the BMW is an incredible bike way beyond its spec sheet suggests.

It shouldn’t be. 110bhp is hardly worth getting excited about. It’s an old air-cooled Boxer twin motor and let’s look at what it hasn’t got: there are no gadgets to play with, no electronic suspension, no power modes and no traction control, and in this instance all it hasn't got is good and makes it a better bike.

There is ABS, but beyond that the bike is BMW’s idea of a stripped down roadster ready for creating your own vision of what a modern customised roadster should look like. You get a fuel gauge, a rev-counter, adjustable brake and clutch levers and a trip meter, but not much else. It’s modern motorcycling gone pure and away from the madness of the iMotorcycle generation of gadgets.

I was at the Milan Show in 2012 when BMW revealed the original sketches of the anniversary bike, and it looked incredible. The finished bike doesn’t quite have the cool of this one, it still looks great but I couldn’t help feel a slight bit of disappointment when the final production bike was revealed.

It’s not scientific, but, my Mrs has seen literally hundreds of bikes parked outside our house over the last few years and she’s never, ever commented on one. Not one. When I pulled up on the RnineT she said ‘it was hot’. That my friends is praise indeed. BMW’s erstwhile press man told me that the RnineT was a bike that made him smile just to sit on it. He would say that, he’s paid to push BMW, but I know exactly what he means. 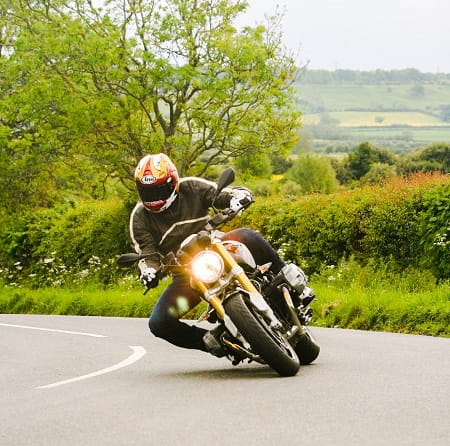 I rode one briefly before and loved it, but came away with a nagging doubt in my mind wondering whether I’d got the bike wrong. I hadn’t.

The more time you spend with it, the more time you appreciate its looks. The details like the BMW logo on the headlamp, the way the headlamp fits on a tiny bracket and it’s all clean behind it, the standard Ohlins forks rather than BMW’s usual over complicated front-end, the aluminium seat hump cowl, those twin pipes (Akrapovic on our test bike), the retro font on the clocks, and the general lack of fuss. It’s retro cool, just not as we know it.

What it is though is an absolute hoot. It’s faster than it deserves to be, or that its 110bhp suggests and it handles too. Most Boxer BMW’s require you to trust what feeling you are or aren’t getting from the front forks as you pitch it hard into corners. The RnineT’s Ohlins upside down front end means you don’t have to guess the feeling, it’s there shouting at you to lean it over harder and trust the Metzeler tyres.

The peg will touch down eventually, and the feeling from the slightly firm back-end means you can gas it out of a corner using as many of the 110 horses as you can find in any given gear. You never ride it and think it could do with traction control, it doesn’t. You don’t have to ride it fast of course, I did purely in the interests of testing. Ride it slower and the burble of the air-cooled motor means you shift early and take in the twistiest, tiniest back roads you can find.

On straight roads the bike is surprisingly comfortable. The seat is a touch hard and as previously mentioned, the rear shock is set on the firm side. But the riding position itself is good for 90mph and better over long distance than most other naked bikes. I was also surprised to see it hauling 145mph on the speedo, on closed roads, of course. A naked bike that allows you to cover distance? Blimey.

It’s a feel-good bike which you will enjoy polishing on a weekend and enjoy owning, but one that is way more practical than other retro style bikes. The headlight works properly, it’s fast enough, makes a great sound from the twin exit Akrapovic exhausts fitted to our test bike, and makes just the right kind of burble and popping on the downshift.

There are a lot of things right with the Beemer and despite my initial concerns that it was just an R1200R in a frock, it’s not. It really is something special. Put a quick shifter on it to keep that constant flat-twin drone going and I’d like it even more.

Whether or not the RnineT will be the kind of BMW that hangs on to its money in the future or not remains to be seen, but as the waiting list gets longer and you now have to wait until next year to get your hands on one, you can’t deny that even at £11,600 plenty of people think its good value. They’ve sold out, and you can’t argue with that.

The whole Bike Shed ‘built not bought’ idea might work if you’re good with spinning a spanner or can pay a man who is to build your dream new wave custom. But if you’re the kind of guy who wants the look without the hassle, then go and buy a BMW RnineT.

Bought, not built maybe, but it would definitely look the part parked outside the Bike Shed Event; if there’s a next time I won’t bottle it and will go with my instinct instead.

I asked the top blokes from the Spirit of the Seventies if the RnineT was the acceptable face of modern motorcycling for the new wave custom scene? They said: "It's exactly that. It's wearing a Hugo Boss suit, but underneath you know it's covered in tats." 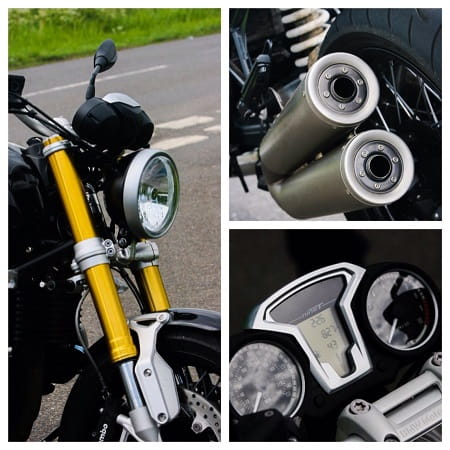