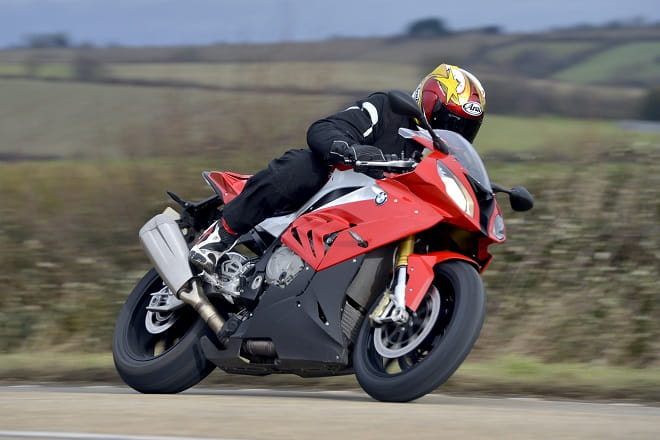 That's quite a feat for a bike that makes 199bhp in total, or 187bhp in rain mode!. On paper it is limited to 80ft-lb or torque too (usually 83ft-lb), hardly the kind of numbers many riders want to be dealing with in the wet. But the way the bike delivers power, the way the traction control gently leads you by the hand and takes you along wet and cold back roads, and the way the suspension seems to know what's coming up makes the BMW S1000RR one of the easiest bikes to ride in winter that I've ever known.

At first you're nervous of the instant response of the new fly-by-wire throttle and the way it picks up from seemingly no revs. Especially when it’s sleeting so bad that it’s settling on the ground. This is a serious 200bhp motorcycle. It’s an S1000RR – the height of sophisticated nutter bastard sports bike design since it was introduced in 2010.

This, the third generation of S1000RR makes no apology for being slighter softer looking, and claims to be even more usable. With the headlights transposed over from the original design, and the main headlight now even bigger it does look a bit boss-eyed. 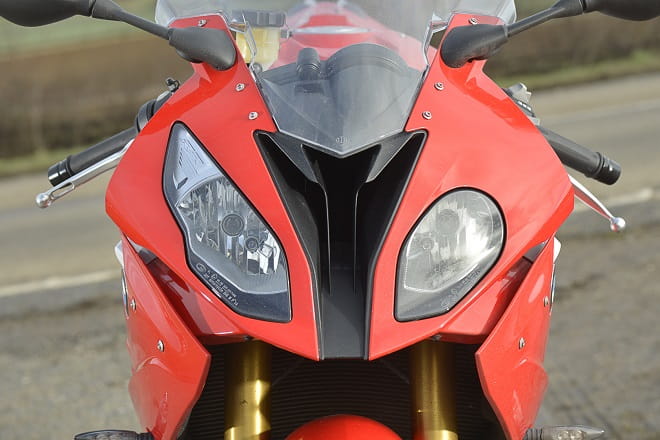 But that doesn’t make it soft. Not a chance.

It’s the noise that gives that away. The bike weighs 4kg lighter overall, putting it at 204kg wet, and most of that weight, well, 3kg of it, is saved by the lighter exhaust system. The other 1kg comes from a lighter battery.

The pipe and the bike in general aren’t a step forward in style, but it weighs less and sounds better. So good in fact that you’d think someone had whacked a Yoshi on the bike, when in fact it’s BMW’s own standard pipe.

Combined with that previously discussed throttle, it rasps and builds revs alarmingly fast and there’s loads more torque. But the new traction control system means it can accelerate as hard as you like with zero risk of spinning the rear tyre, in any weather. The first you know about it is a flashing yellow light on the dash telling you that you are messing with the laws of traction and physics. It’s a step-on from  the old system and in  the wet is simply brilliant, and in the dry you hardly know it’s there. Different modes from race to road, to rain and a setting for slick and the ability to dial in your own settings in ‘Pro’ mean you can get the bike exactly as you want.

In the conditions we had the bike I used rain, a lot, and it meant that when you get on the throttle hard the bike takes control and says ‘no, you can’t have that much power, fool.’ It’s marvellous. The amount of traction can be adjusted on the fly using buttons on the left handlebar too with seven different settings. 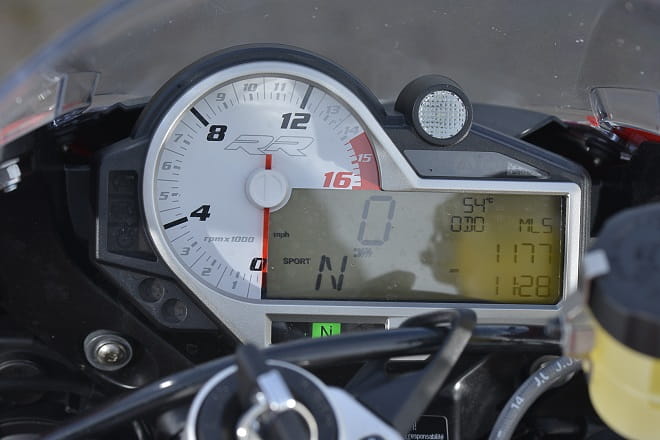 Even better than the cruise control system (the first ever on a 1000cc sports bike), or the brilliant optional heated grips, is the one thing any rider is guaranteed to be playing with at traffic lights is the launch control system. It means you can play at being GP racers whenever you feel like it. It’s like a real-life arcade game, except with 199bhp.

It’s easy to use too.

Hold down the starter button for three seconds in either slick or user mode and launch control, is, er launched. Hold the revs at a pre-set maximum of 9000rpm and let the clutch out and the bike does the work for you backing off power and torque to give the best possible launch. When you shift to second you’re on your own again. The feeling, and the noise it makes doing it is something everyone has to try at least once.

If your MotoGP rider fantasises aren’t quite fulfilled then just dial in Pro mode, get it into first gear, hold down the starter button and twist the throttle and it dials in a pitlane speed limiter of 40mph too!
The bike is a myriad of technology that might be overwhelming at first, but you soon get used it.

Like the new Ducati Panigale 1299S and the BMW R1200RT, the 2015 S1000RR also has a form of blipper system that changes the way you downshift. You still use your clutch to pull away, but once going you can use the optional HP Gear Shift Pro to change up with the resulting pop of unburnt fuel on the upchange. On the downchange you just forget the clutch and bang your foot on the gear lever. It even works when braking for junctions down from second to first gear perfectly blipping the revs and matching them to the engine speed.

Initial impressions are that it feels a bit soggy compared to the system on the new Ducati 1299 Panigale and you have to give it a decent kick to get it to engage. But it soon changes the way you ride and it’s easy to forget to use the clutch in town at all. 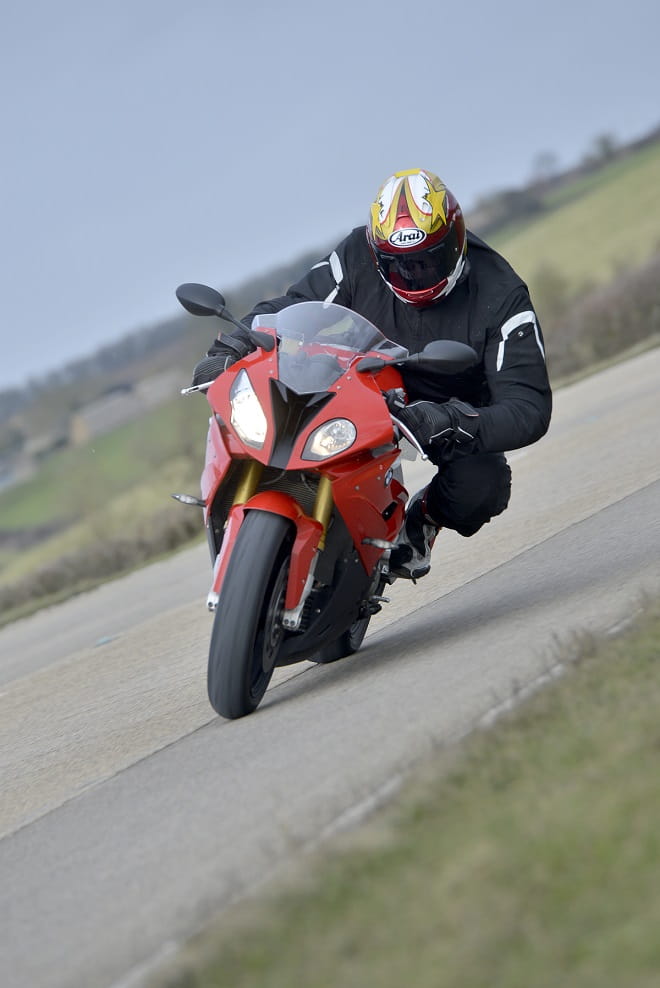 But more than the madness that unfolds every time the S1000RR goes for a gap, or accelerates out of a corner is the way something with almost 200bhp always feels so unflustered.

The handling is incredibly impressive and the brakes can be used hard in all weathers. You never ask for any more and they have impressive feel too.

The suspension on our test bike features Dynamic Damping Control. It’s the same electronic suspension system taken from the 195bhp BMW HP4. The damping automatically adjusts to suit the mode the bike is in, and the conditions.


For example, quick direction changes will stiffen up the suspension, it stiffens up under hard braking, and sets the appropriate damping for acceleration and cornering by taking feeds from the throttle position, the lean angle sensor, and the bumps in the road surface.

It’s a hell of a lot to take in and understand. But what you need to know is that on the road it takes out bumps from the road, stops you jumping out of the seat on roads I’ve ridden for 20 years, and makes the whole environment feel serene.

At the same time you’re sat on top of one of the most violent, hilarious and aggressive sports missiles ever created. But it allows even average riders in tricky conditions to ride like professionals. You know all of it is going on underneath you but somehow it’s like you’re being looked after. And after all, isn’t that how it’s supposed to be? 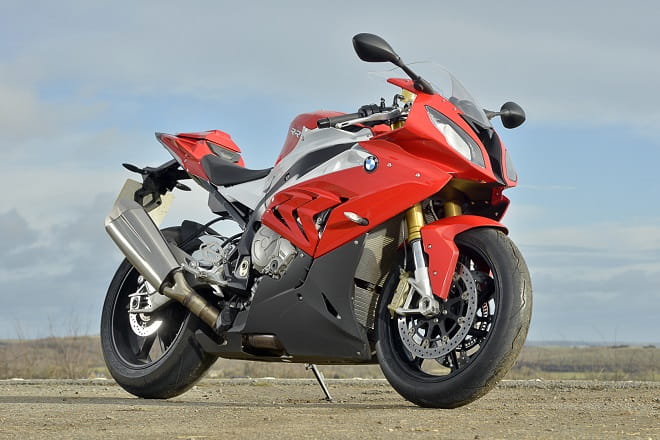 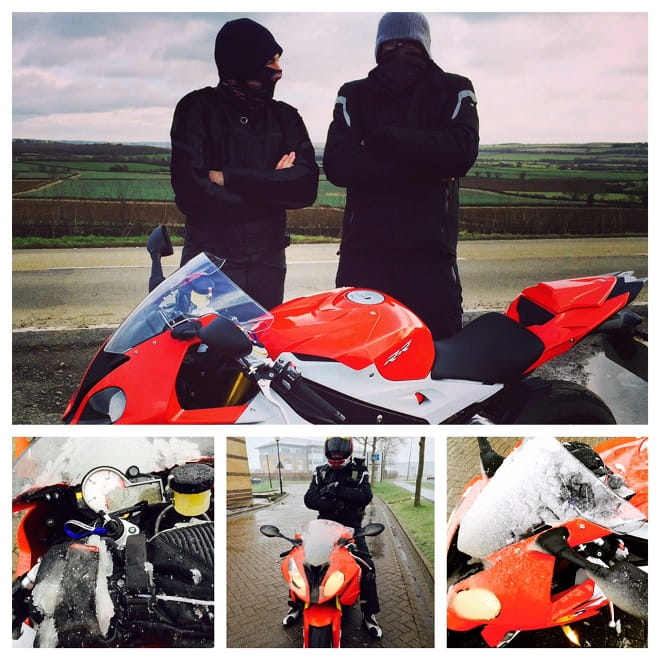 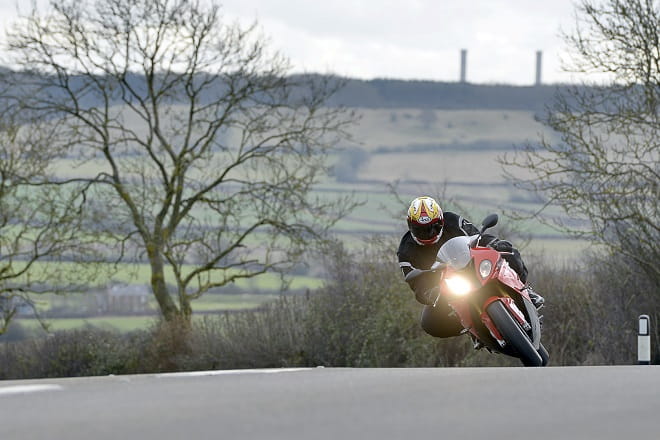