BMW has sold 50,000 R1200R's since its launch in 2006, and the naked boxer has earned a reputation as a capable, practical all-rounder, with its restrained styling, flexible power delivery and conservative chassis. It’s been sound if not bursting with excitement; a middle-aged accountant of a motorbike, in a polo shirt and sensible shoes, married with 2.2 kids and a liking for gardening.

If that’s the traditional R1200R, then the new-for-2015 model is the same guy after he’s lost his job or discovered his wife is having an affair. Suddenly he’s joined a gym, gained some tee-shirts and a sleeve of tattoos, and set out in search of excitement. And in the case of the bike, added 15bhp and liquid-cooling, swapped the Telelever front end for upside-down forks, and added a sporty styling job plus a bunch of advanced electronics. 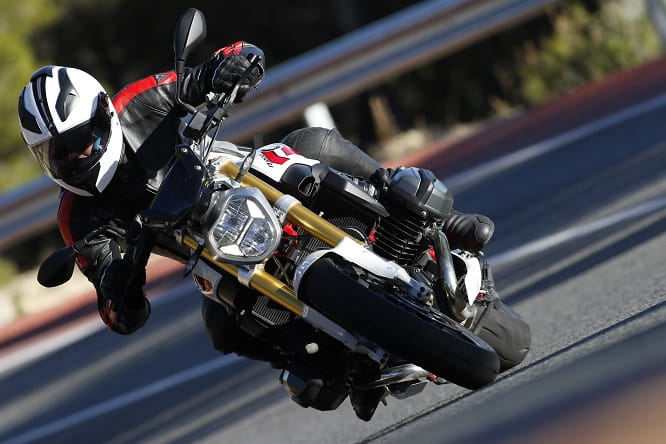 This represents a significant change of emphasis as well as technology, and it also makes perfect sense. BMW has already spread its liquid-cooled boxer powerplant from the R1200GS to the GS Adventure and RT, as well as having great success with the R nineT’s blend of aircooled boxer engine and telescopic front suspension. This R1200R uses an identical 125bhp engine to the GS, while adopting nineT style upside-down forks plus the other liquid-cooled boxers’ potential for multiple engine modes, semi-active suspension and more.

From the revamped R-model’s slim seat, gripping a pair of slightly raised bars and looking over a new, vaguely key-shaped digital instrument panel, this all makes plenty of sense. The motor fires up with a pleasant but restrained note from the two-into-one pipe, and as soon as I pull away it’s clear that the liquid-cooled lump’s extra power gives it seriously lively performance.

With a road-ready weight of 231kg the R-bike is roughly 9kg heavier than the nineT but it’s 15bhp more powerful and leaps forward enthusiastically, revving quickly and smoothly. Especially so in the case of the launch bikes, which are all the top-spec of the three alternative R1200R models (which BMW calls the Exclusive in the UK), so are fitted with BMW’s Gear Shift Assistant Pro quick-shifter as well as the additional Pro riding mode that adds a Dynamic mode with sharper throttle response (and also a programmable User mode) to the standard bike’s Road and Rain. 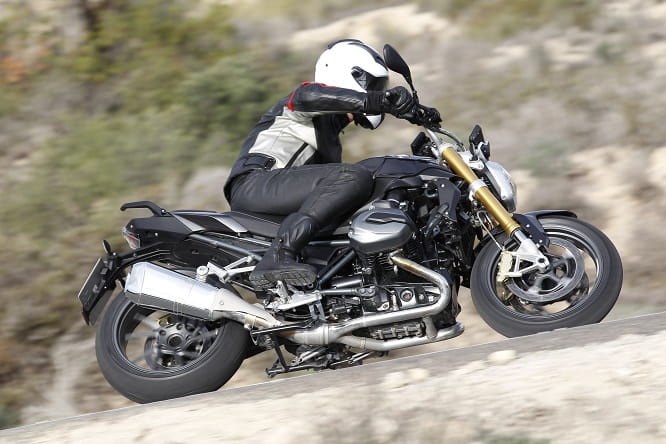 The quick-shifter worked flawlessly and I really enjoyed using it to short-shift effortlessly through the box, though some riders weren’t convinced of its usefulness. Personally I was less convinced of the need for multiple engine modes, as there wasn’t a huge difference between Road and the sportier Dynamic, and despite some very blustery weather we had no need for the softer Rain mode. Most of the time I left the BMW in Dynamic as the delivery was still very smooth and precise.

That was also true of the chassis, which on the Exclusive model gets BMW’s Dynamic ESA (Electronic Suspension Adjustment), allowing push-button tuning of damping rates. In Dynamic mode the ride was slightly sportier, but still not remotely harsh, to the point where I found it wasn’t always obvious which mode I was in without sneaking a quick glance at the instrument panel, whereas on the R1200GS and RT the difference had been more pronounced. 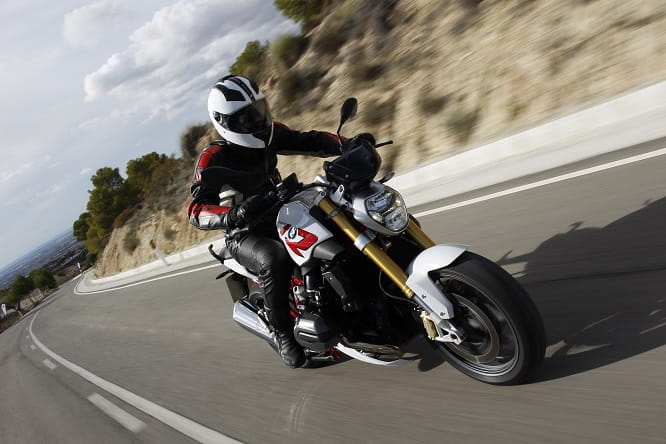 The R-model handled very well, although having been hugely impressed by the aggressive Concept Roadster that BMW displayed in the summer – with its white paintwork, aluminium seat and hand-welded racepipe – I was, perhaps unreasonably, expecting something slightly more racy from the production model. In fact the R1200R’s steering geometry is less sporty than that of the R nineT and the new bike also has more suspension travel than the retro styled boxer, with 140mm at each end.

The result is a bike that steered with a pleasantly neutral feel, and was great fun on the twisty launch route through the Spanish hills, but which didn’t feel especially light and sporty. What it did do though was soak up the bumps very efficiently, give a very smooth ride, and deliver plenty of ground clearance plus good grip from Metzeler Roadtec Z8 tyres. 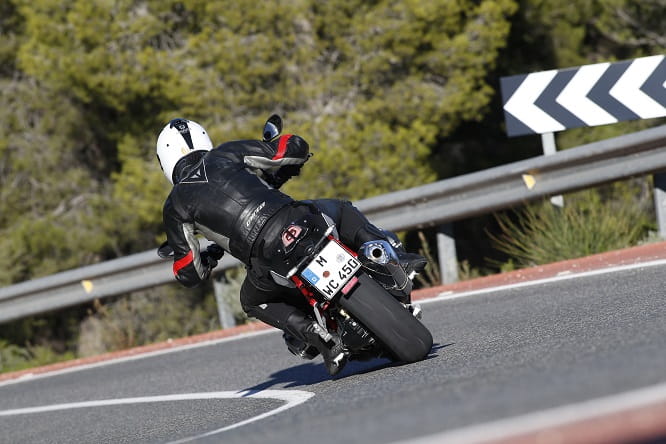 I’d hoped to take a racy looking white-and-red R1200R (the colour of the mid-ranking Sport model in the UK) but ended up spending most time on the grey Exclusive, and had to conclude that perhaps the more sober paint scheme suits it slightly better. Being tall, before leaving I’d fitted a thicker seat, which like a shorter one is available as a no-cost option, and which gave plenty of leg-room and contributed to a very comfortable ride. So did the accessory heated grips that were very welcome on a bitterly cold day.

The reason that the R1200R isn’t quite as firmly sprung and sporty as the R nineT is that it was created to be more versatile and comfortable. The Exclusive, which costs £11,910, comes with cruise control, a centre-stand, luggage rack and pannier fittings as standard, and it’s designed to be stable with a pillion and hard luggage.

This R1200R is notably quicker and more sophisticated than its predecessor, and handles very well, but isn’t quite the sporty naked boxer that appearances might suggest. Instead it’s a capable, practical all-rounder, with flexible power delivery and a fairly conservative chassis. That middle-aged accountant still has the tee-shirts and tattoos but the missus is back, he’s got a new job and is doing it better than ever.