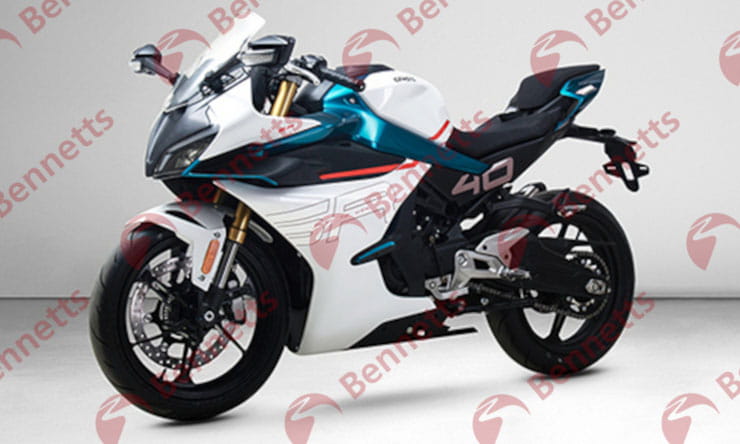 CFMoto has continued to impress over the last couple of years – first with the 700CL-X and then with the new 800MT – and now it’s on the verge of launching an intriguing 450cc twin-cylinder sports bike that doesn’t have any obvious direct rivals.

The company’s recent moves towards sportier machines have been clear. First, we saw the 300SR, now on sale in the UK, and then the be-winged, single-sided-swingarm-equipped 300SR-R broke cover in China. However, the company’s clearest signal of intent came with last year’s SR C21 concept, a carbon-clad sports bike bristling with high-end parts from Brembo and Öhlins.

Despite showing the concept, CFMoto has never confirmed any technical details about its engine or performance. It could be seen to be a parallel twin, but the bike sparked plenty of speculation about its capacity; was this Chinese creation set to rival bikes like Yamaha’s 321cc R3, or was it closer to the 689cc R7? 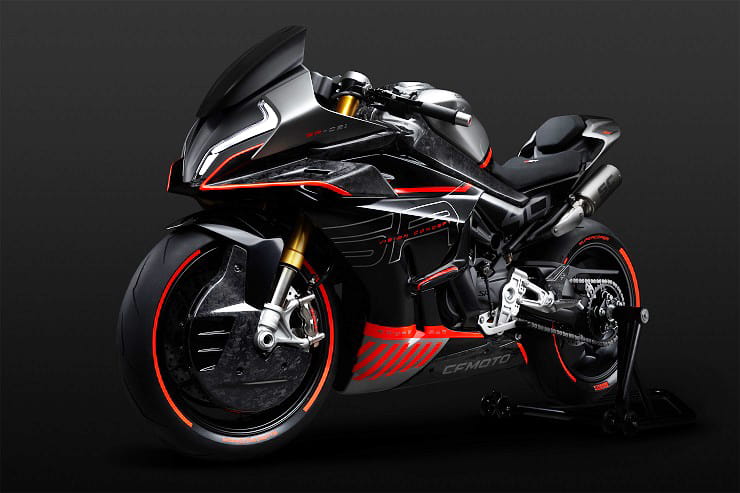 As it turns out, the answer is somewhere between those machines. We’ve got our hands on the Chinese-market type approval documentation for the production version of the SR C21, and it packs a 449cc parallel twin that appears to be completely new.

It’s understood to combine a 72mm bore with a short, 55.1mm stroke, making for a high-revving, high-performance engine for its capacity. Peak power is a healthy 50hp (37kW), and since the bike weighs a mere 168kg wet, the result should be strong performance. It’s lighter than a Yamaha R3 as well as having substantially more power from the larger engine.

The approval specs put the top speed at 190km/h, or 118mph, which sounds about right.

Normally, bikes with around 50hp are detuned to an A2-licence-legal 47hp before reaching the European market, but that might not be the case here. The A2 rules specify that as well as not exceeding 35kW (47hp), compliant models can’t have a power-to-weight ratio of more than 0.2kW per kg. Even if detuned to 35kW, the 450SR would have to weigh 175kg to meet that limit, so CFMoto would either have to add ballast or detuned the motor further, down to around 45hp, to bring it into compliance while retaining the 168kg mass.

Visually, the SR C21’s black and carbon bodywork might have been swapped for white and blue on the production 450SR (we’re guessing at that name but given CFMoto’s normal naming policy it makes sense) – but the shape hasn’t changed much. The bold ‘40’ written on the side of the bike, which was also present on the concept, reflects the fact it’s designed at Modena 40, which is CFMoto’s European R&D studio.

The original concept lacked headlights, only having LED strips set into the nose. Those LEDs are replicated by the production model’s DRLs, but now sit above a pair of conventional lamps. The concept’s long winglets have been carried over to the production model, though, as has the trellis-style steel frame and the clean-looking bodywork, uninterrupted by excessive vents but featuring a practical crash bung built into each side. Of course, mirrors (with built-in indicators) and a licence plate bracket have been added to ensure road-legality. 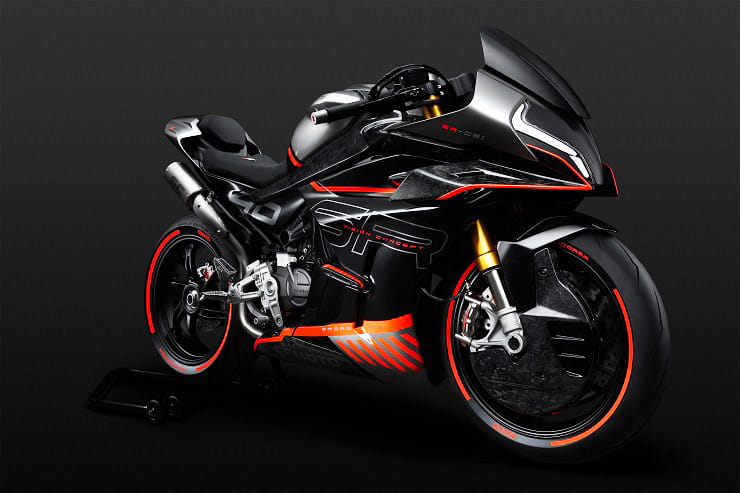 The suspension and brakes are toned down for production, but the overall shape is unchanged

The concept’s single-sided swingarm has fallen by the wayside, at least for the moment. We wouldn’t be surprised to see a 450SR-R appear at a later date, reinstating the single-sider. The adjustable rearsets of the concept are also gone, switched for fixed ones on the production bike, while the clip-on bars have been raised, now sitting above the top yoke rather than below it.

However, it’s really in the suspension and brake parts that savings have been made. The production 450SR goes to a single front disc instead of the concept’s twin-disc setup, and the caliper is unlikely to be as exotic as the Brembo of the show bike. The carbon disc shrouds of the concept bike have predictably been consigned to the bin, too. There’s still Bosch 9.1 ABS, though.

The forks, while still gold-coloured upside-downers, are no longer expensive Öhlins parts, and the dual, high-mounted SC-Project exhausts of the SR C21 have been switched to a single, low-mounted pipe on the right-hand side.

There’s no word on how soon the 450SR (we’re guessing at the name, but that’s the logical one given its capacity and CFMoto’s normal naming conventions) will be launched, but now it’s type-approved in China it’s unlikely to be long. It may be more of a wait for a UK-bound version of the bike, but by 2023 there’s a good chance it will be in dealers.