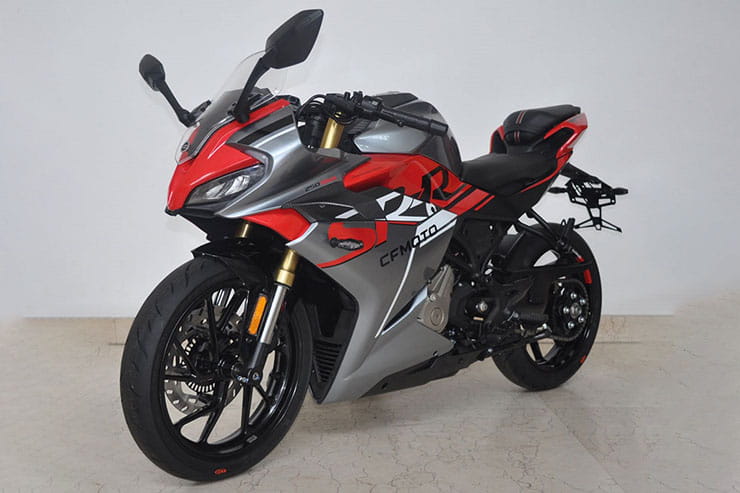 CFMoto’s 300SR sports bike went on sale in the UK in April – nearly two years after the firm started teasing its existence – and now another version of the bike has emerged in Chinese type-approval documents.

Dubbed the SR-R, the type-approval shows the slightly smaller capacity 250 version, but since the existing 250SR sold in Asia and the 300SR offered here are identical in all but their engine size (249cc vs 292cc), a 300SR-R is almost certain to arrive on this side of the world.

At a quick glance you might not notice the changes that set the SR-R aside from the existing SR, but we’ve all been conditioned to know that an extra ‘R’ means a sportier bike, and that’s exactly what this is.

The new SR-R logo splashed down the side is the most obvious change, but the there are far more significant upgrades as you delve deeper into the bike. The 249cc engine is rated at 29hp, which is the same as the 292cc 300SR we get here, but it’s not the focus of the changes. Instead CFMoto has stripped weight from the bike and focused on the chassis and bodywork.

Weight drops significantly, with a kerb mass that’s down from 165kg for the existing model to 157kg for the SR-R. Although the documents don’t tell us where the savings are made, there are noticeable changes to the suspension. Visually the forks are different, with gold-coloured legs instead of the black of the normal SR, suggesting improved internals to go with them, but at the back there’s the biggest update of all – the introduction of a single-sided swingarm instead of the basic SR’s dual-sided design.

Of course, that means a new rear wheel is needed, too, although that will be more evident when we get to see the right-hand side of the bike instead of the lone image of the left-hand side that accompanies the type-approval.

More weight saving is likely to come from the bodywork, which appears in part to be either carbon-fibre or carbon-effect. Among those carbon-looking parts you’ll find another signature of the SR-R that marks it out from the normal SR – a sizeable pair of winglets extending from the sides of the fairing.

Does a 29hp bike really need winglets to keep the nose down? Of course not, but neither does it ‘need’ a single-sided swingarm. Trends of bigger, faster bikes have always tended to trickle down to smaller models, and, necessary or not, the aerodynamic extensions give the SR-R a distinctly more race-rep appearance than the SR. Other visible changes include a new pillion seat pad with a body-coloured central stripe.

With show season fast approaching, it’s likely the SR-R will be officially unveiled within the next couple of months, with sales likely to start – at least in China – in early 2022.