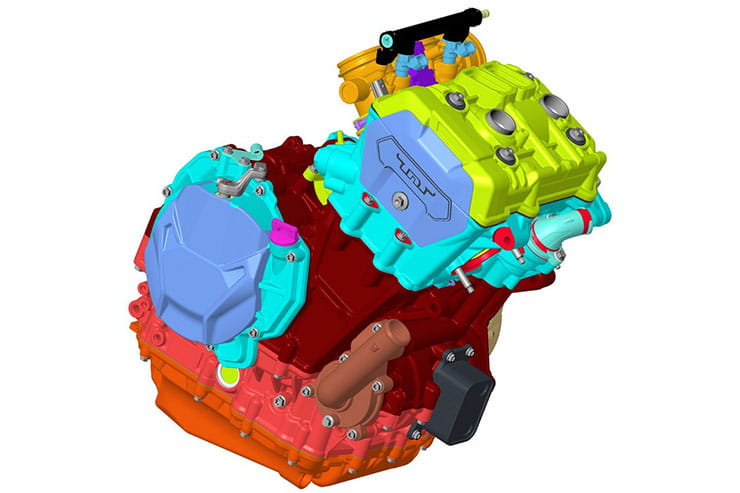 The images come from a patent filed by Benelli’s Chinese parent company, Qianjiang, covering the cosmetic appearance of the new engine. Although Qianjiang owns multiple brands, including QJMotor and Benelli, it’s clear that this twin is destined for the latter as it clearly carries the ‘TNT’ logo on the cylinder head.

Although the design doesn’t reveal the engine’s internal structure, it does confirm the motor’s internal designation – QJ288MW – which gives some clues to its specs. Naming conventions for Chinese engines usually start with the manufacturer’s initials, followed by the cylinder count and then the cylinder bore measurement in millimetres. In this case it’s QJ for Qianjiang, 2 for two cylinders and 88 to represent an 88mm bore. 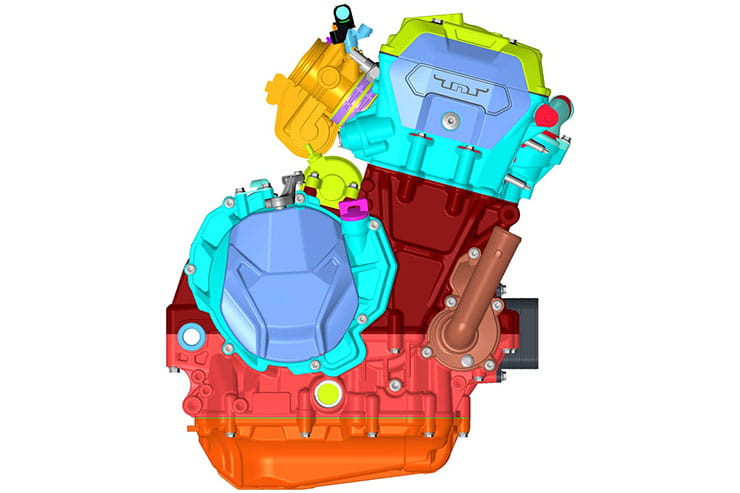 Visually, the engine is similar to KTM’s LC8c twin, as used in the 790 and 890 Duke and Adventure models as well as spin-offs like the Husqvarna Norden 901, and the 88mm bore measurement matches the original, 799cc ‘790’ version of that engine.

It’s worth noting that the LC8c is already manufactured in China, by CFMoto, on behalf of KTM, and CFMoto also has its own version of the 799cc twin, used in its newly launched 800MT adventure bike.

The Benelli twin seen here isn’t 100% identical, though, suggesting that while the firm might have used the KTM design as a template it hasn’t simply copied every component. The pattern of bracing around the cylinders and the engine’s bottom end is different to either the KTM or CFMoto units, and the castings for the cylinder head, water pump and the clutch and generator covers are also distinct, even if the pattern and spacing of the bolts that hold them in place is identical. 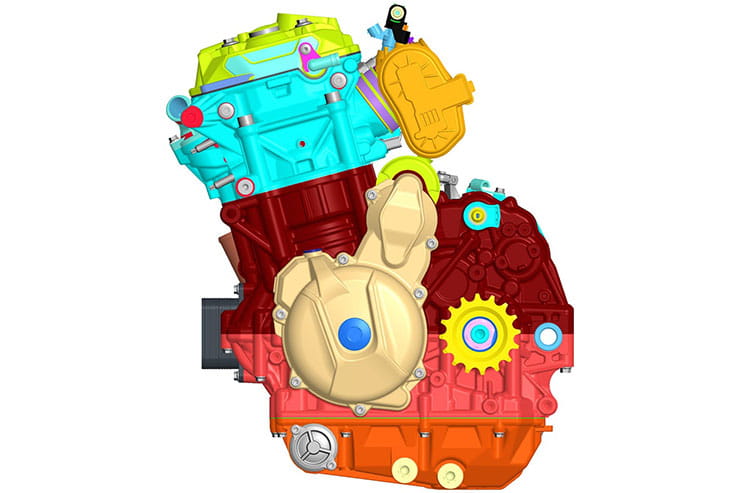 Of course, Chinese copies of successful engines aren’t unusual. Kawasaki’s 650 parallel twin has inspired several Chinese-made motors, as has Honda’s CB500 engine. Last year, we also saw that another Chinese company, Colove, has been developing a twin that closely mimics the KTM LC8c for use in its own 800cc adventure bike.

Although we’ve yet to see the bike that the new Qianjiang-made 800 twin will be fitted to, the appearance of the ‘TNT’ badge on the right-hand side of the cylinder head gives a clear clue that it’s destined for a new, naked Benelli model. The firm already has a 754cc twin, used in the Leoncino 800 and the 752S, as well as the newly launched TRK800, but it’s a relatively old design with its roots in Benelli’s older three-cylinder engine. Benelli also re-released the TNT899 in China for 2022, but the new engine patent suggests it has much more ambitious plans to expand the TNT line.

The engine also matches plans, announced by Benelli in September 2020, to make a new range of parallel twin engines. At the time, the firm said it intended to make new 250cc, 380cc and 530cc singles, 400cc, 700cc and 900cc twins, 900cc and 1200cc triples and 650cc and 1000cc four-cylinder engines. The last of those, the 1000cc four, will be derived from MV Agusta’s four-cylinder, but the engine seen here is likely to be the 900cc twin, hinting that while its bore matches that of the 799cc KTM LC8c engine, the Benelli unit will have a longer stroke to reach the 900cc mark.