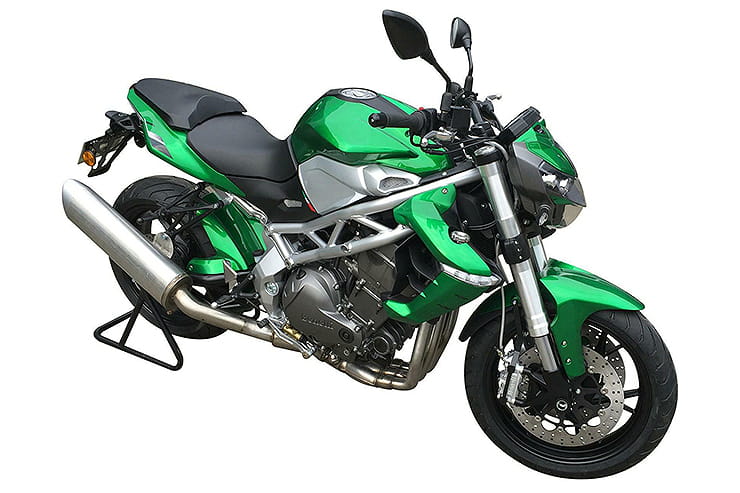 Last week Benelli began teasing a new four-cylinder engine that we identified as MV Agusta’s old-generation F4 motor. Now the two firms have officially confirmed a strategic partnership and Benelli has revealed plans for a 1000cc four-cylinder bike and a revival of the old 900cc triple.

Benelli’s eventual plan is to have a range of bikes from 250cc to 1200cc, with single, twin, triple and four-cylinder engines, while MV’s part of the deal sees it tying up with Benelli’s parent firm Qianjiang, initially to distribute MV Agusta’s range in China but later expanding to become an ‘industrial’ collaboration including engine research and development and product cooperation. 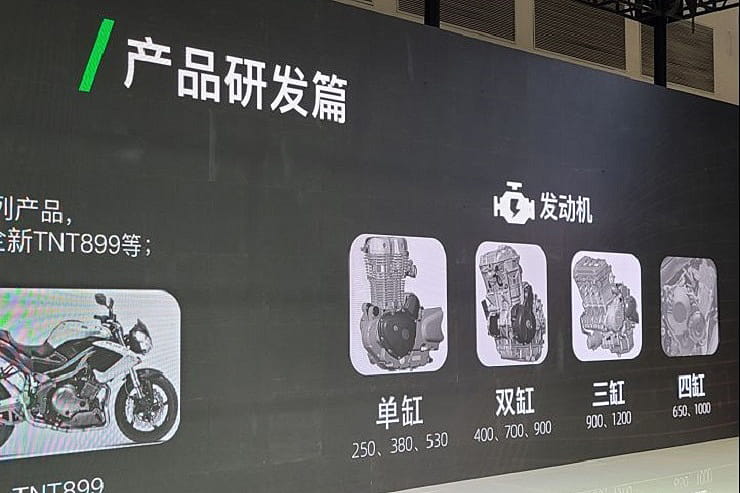 Benelli laid out its plans at the CIMA show over the weekend, revealing a slide showing that it plans to have four engine families.

At the bottom of the line there’s a range of air-cooled single-cylinder engines in 250cc, 380cc and 530cc forms. These will go into classically-styled Benellis like the Imperiale, due to be revealed in 530cc form later this year to sit alongside the existing 400, and a Benelli-branded version of the newly-launched QJMotor Turismo Sport 250.

In terms of future models, Benelli has announced that it will soon unveil the parallel twin TRK800 adventure bike and a ‘Leoncino Cross’ based on the existing Leoncino scrambler. 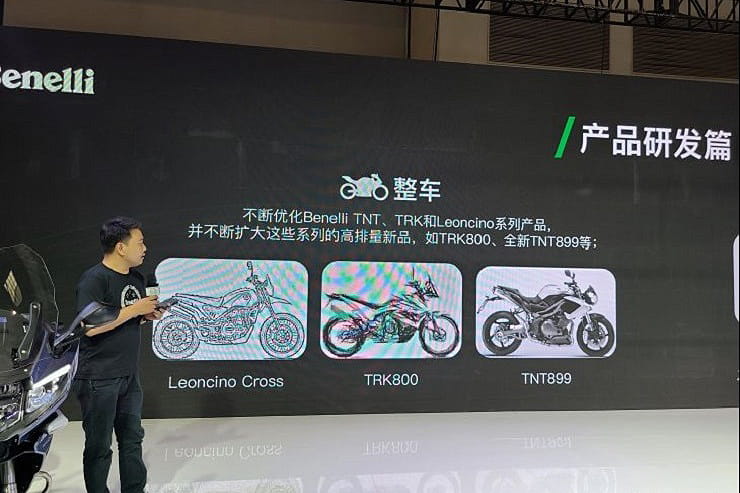 Benelli will also reintroduce its classic three-cylinder engine, which started life in the Tornado Tre and later went on to power the TreK and TNT models before the firm was bought by Qianjiang.

The firm has already revealed the engine in a new 1209cc form in its new 1200GT tourer, but now it’s confirmed that the TNT899i is going to be revived, bringing the engine back in 900cc form.

That announcement confirms a scoop that BikeSocial got way back in 2016, when we revealed detailed photos of a prototype 900cc Benelli triple, designed at the same time as Benelli was developing the 752S 750cc twin. At the time, we suggested the new Benelli could be a replacement for the TNT899, but at a lower price than the old model. The designs feature a tubular steel frame and more conventional styling than the old TNT. The underseat exhaust, for instance, was replaced with a side-mounted pipe – reducing cost, simplifying the task of meeting tighter emissions rules and allowing for more modern proportions with a slimmer, lighter-looking tail. 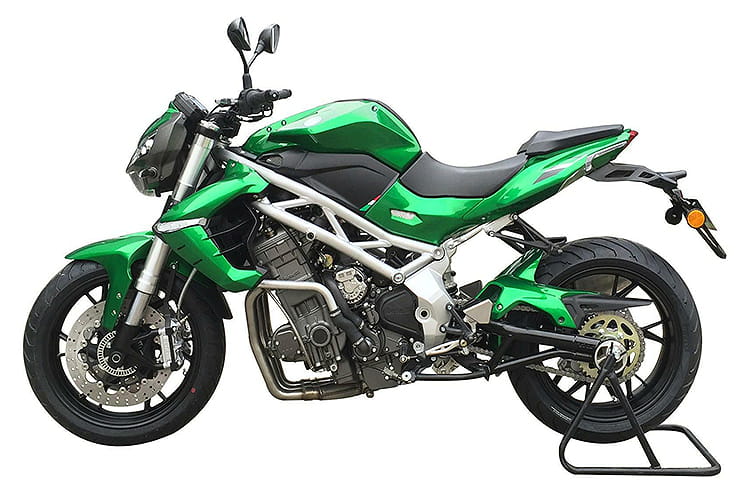 Announcing the revival of the TNT899 over the weekend, Benelli used photos of the old model, but the pictures you see here, despite dating back to 2016, could be more accurate.

Designs for Benelli’s new 1200GT tourer emerged at around the same time and that bike has just been revealed in completed form, ready for production next year, with unchanged styling. It takes years to develop a motorcycle even when you’ve already got the engine to build it around.

That extended development schedule means it might be a while before we see the planned four-cylinder, 1000cc Benelli that the firm also announced at the CIMA show.

At the moment, Benelli’s only four-cylinder is the 600cc engine used in the TNT600i and also in the new SRG600 sports bike and SRK600 naked from its sister firm, QJMotor. At CIMA, Benelli announced it will be making a 650cc four and a 1000cc four.

The 650 engine is likely to be an upscaled version of the existing motor, given extra cubes to offset any power loss incurred by meeting the latest Euro5 emissions limits. While we have yet to see the 1000cc four-cylinder engine, Benelli’s teaser image showed it was identical to the old MV Agusta 1000cc four, and the newly-announced partnership between the companies effectively confirms that’s what it will be. 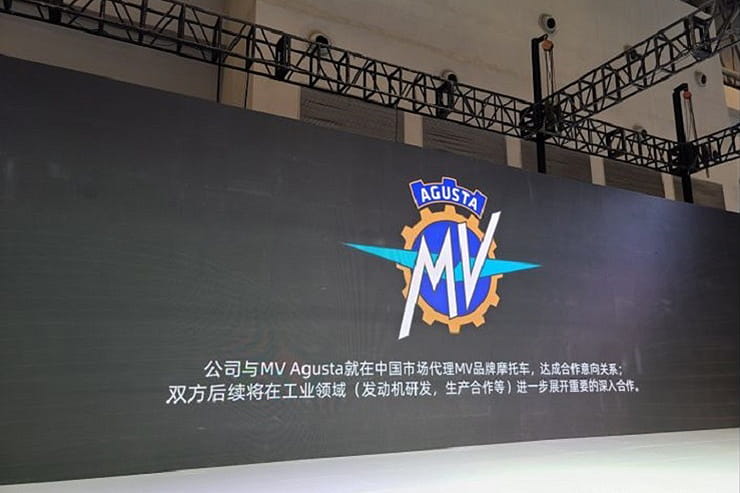 Speaking of the partnership, MV Agusta CEO Timur Sardarov said: “I am thrilled about this agreement with QJ for the second phase of our expansion into the Chinese market. It is a very ambitious long term partnership that will make MV Agusta the number one Italian premium motorcycle brand in China in the next 5 years. QJ is one of the leading global players in terms of scale, market presence and quality standards and I am confident that with such a solid partner we will reach, and possibly beat, all our commercial objectives very rapidly. We are also developing a further, important collaboration on the industrial front, which we will announce shortly.”

Dongshao Guo, General Manager of Qianjiang Motor Co. added: “We thank MV Agusta for choosing to establish a new strategic partnership with us. MV Agusta is a world-famous brand with a long history, and also an old friend and close partner of Qianjiang Motorcycle. This cooperation is not only a strong combination of the two sides' business, but also a further recognition of the brands and ideas of each other. We hope that in the future we could work together to bring in for the Chinese customers more high-performance motorcycles that are fashionable, easy to handle, and fun to ride. We aim to make motorcycle travels freer, greener, and more passionate.”