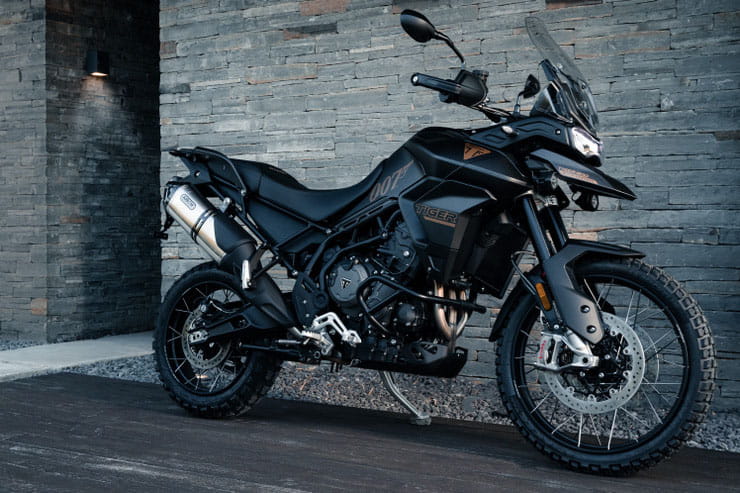 For decades the only Tiger to be found in a Bond film was 007’s Japanese counterpart, Tiger Tanaka, in You Only Live Twice. The latest movie – No Time To Die – changes that by featuring Triumph’s Tiger 900 Rally Pro alongside the firm’s Scrambler 1200 and now there’s a limited-edition model to mark its Hollywood stardom.

It’s been a long wait for the latest Bond outing. No Time To Die was originally scheduled for release in November 2019, and its first delay – to April 2020 – coincided directly with the Covid-19 pandemic, leading to further rescheduling, initially to November 2020, then April 2021 and finally to 30th September 2021.

Frustrating though those delays might be for fans, they mean Triumph has been able to take a second bite of the cherry when it comes to limited-edition bikes marking the movie’s release, adding a Tiger 900 Bond Edition to the Scrambler 1200 Bond Edition that was launched last year. 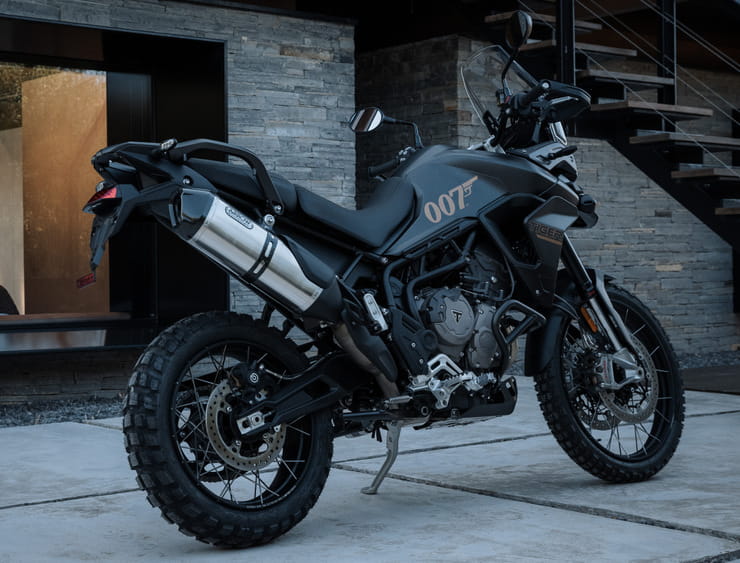 Had Bond’s 25th official cinema outing reached audiences in November 2019 as originally planned, it would have been the first sight of the Tiger 900, which was unveiled in December that year.

The stunt crew making the movie were lent some Tiger 900 prototypes for the filming, and Lee Morrison, No Time To Die stunt coordinator, said: “The Tiger 900 is the most confidence-inspiring bike, it allows you to really push the ride as far as you want, you can take as many liberties as you want; stand up sideways drifting in third gear, slow wheelie it, slide it Supermoto-style.  I honestly think it’s one of the best bikes I’ve ever ridden, it’s fantastic.”

The original release timing would have been good promotion for the Tiger, but not for the creation of a special ‘Bond Edition’ of the bike. Instead, Triumph made the Scrambler 1200 Bond Edition, replicating the bike Bond is seen riding in the movie’s trailer.  Now, with Tiger production in full swing for more than a year, the firm has been able to prepare a Tiger 900 Bond Edition to suit the revised release date. 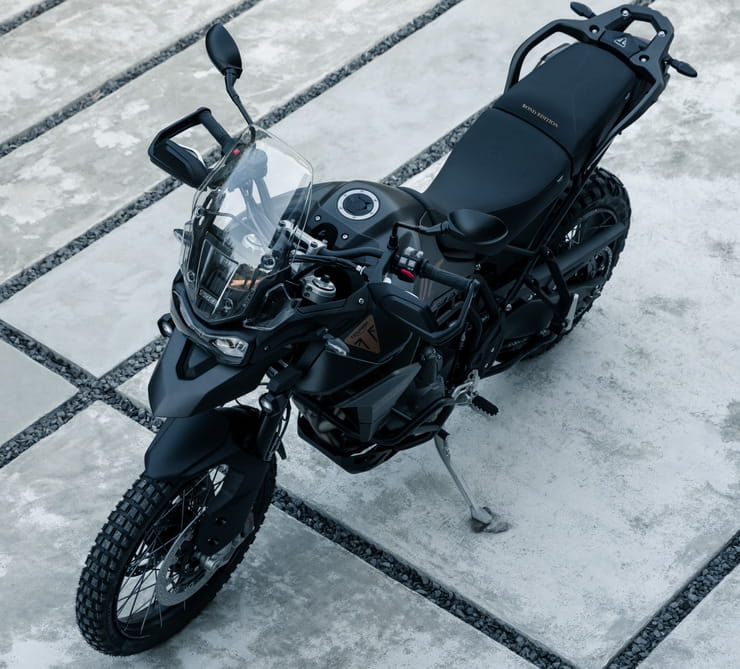 Just 250 of the Tiger 900 Bond Editions will be made, each numbered on the billet machine bar clams and coming with a signed certificate of authenticity. They’re based on the Tiger 900 Rally Pro like those used in the movie.

The matt black paint carries the addition of bold, bronze coloured ‘007’ on either side and matching ‘Triumph’ and ‘Tiger’ badges. The front beak bears a ‘Tiger 900 Bond Edition’ decal to leave no doubt about its identity, and ‘Bond Edition’ is stitched into the seat. The bikes in the film are a much closer match to the Tiger Tramontana created for the PanAfrica rally back in 2017.

Badging aside, the bike is as blacked-out as it could be. The bodywork’s colour is extended to the frame and swingarm, the forks, the engine guards, headlight brackets, pillion peg hangers and sump guard. After all, the movie bikes were prototypes, and that’s how they’re usually turned out. 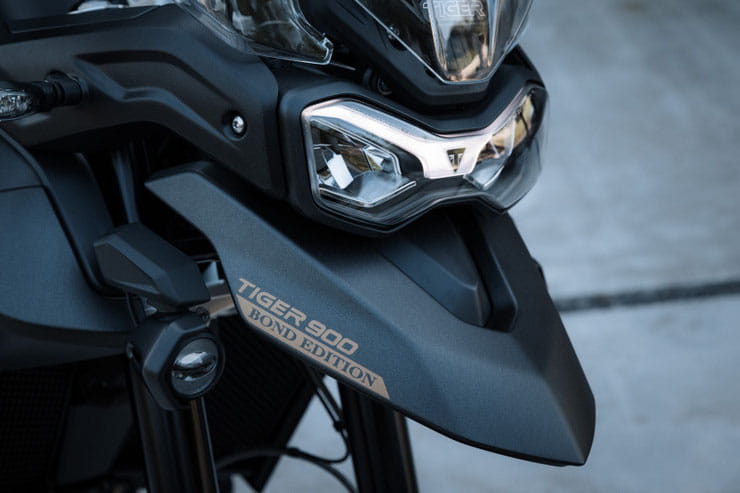 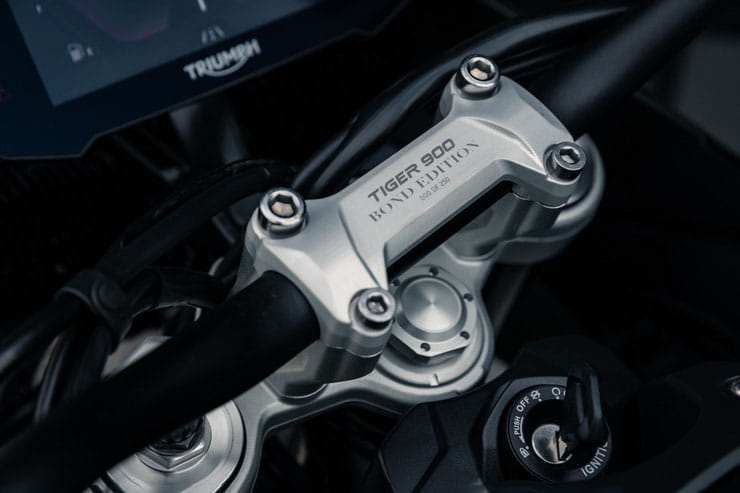 On board, you get a ‘007’ start-up screen on the TFT dashboard, while add-ons include auxiliary lights (in black, of course) and heated seats for both rider and passenger. The limited-edition’s spec is upped with an Arrow silencer with carbon end cap, and buyers will be given a set of Michelin Anakee Wild off-road tyres as well as the stock Bridgestone Battlax rubber to complete the movie look.

The UK price of the Triumph Tiger 900 Bond Edition is £16,500 and while it's not due in dealers until March 2022, but with so few of the bikes being made any fans wanting to get their hands on one should get an order in sooner rather than later by contacting their local dealer. 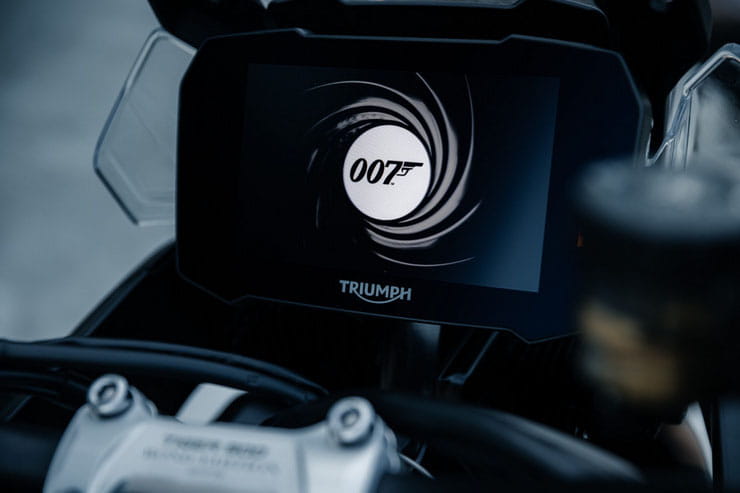