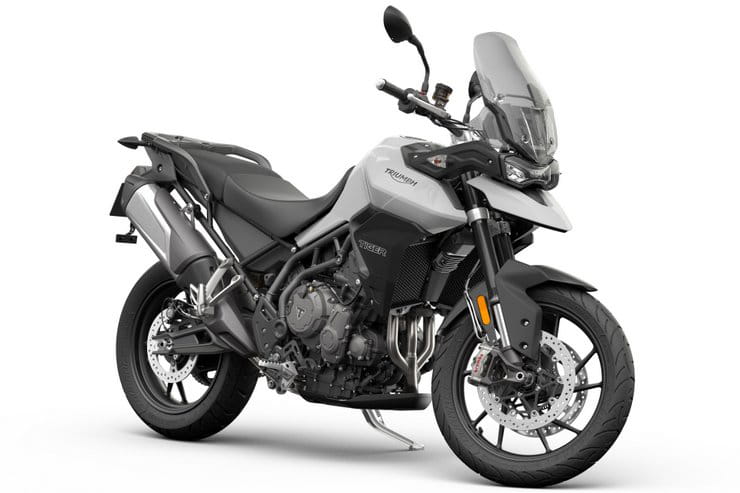 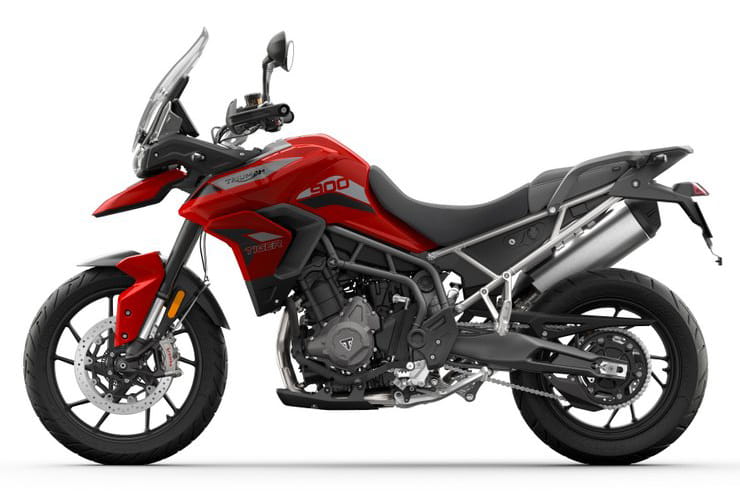 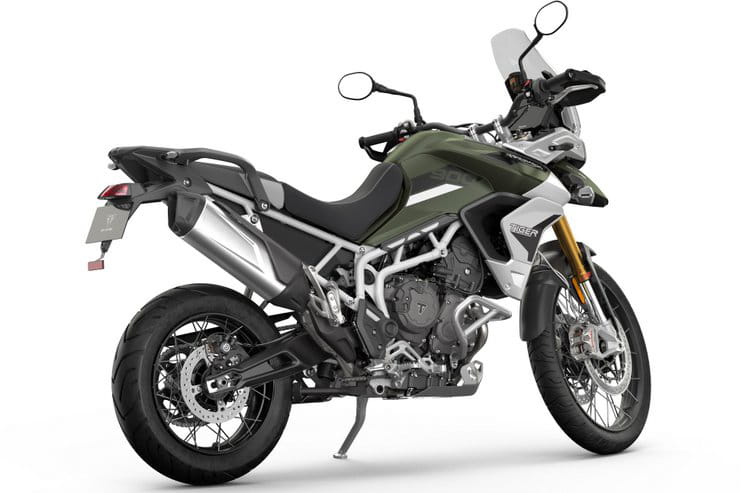 We’ve known for a while that Triumph has been planning an up-sized replacement for its hugely-successful Tiger 800. Now it’s here: the 2020 Tiger 900.

Despite continuing the family name of its predecessor, this is the biggest revamp that the middleweight Tiger has ever had. There’s a new engine, new chassis and new styling and at last Triumph has replaced its confusing ‘XR’ and ‘XC’ model designations with more self-explanatory ‘GT’ and ‘Rally’ monikers to differentiate road and off-road oriented versions. 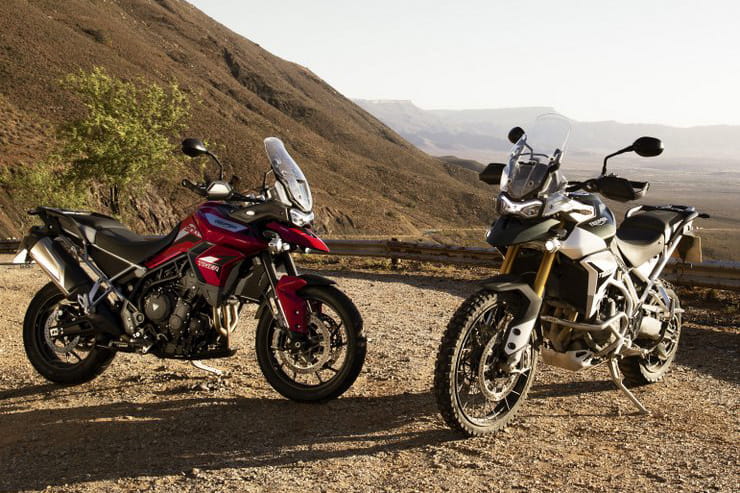 The new range consists of five models. The base model, simply called Tiger 900, is a road-biased model with non-adjustable Marzocchi suspension and a 19-inch front, 17-inch rear alloy wheel combo. Next comes the Tiger 900 GT, also road-oriented and with the same wheels but gaining adjustable Marzocchis and a 7-inch TFT dash. The Tiger 900 GT Pro adds electronic rear suspension adjustment, a centre stand, IMU-controlled cornering ABS and traction control, auxiliary lights and an additional, rider-configurable riding mode to the GT’s kit. The Pro also gets an up/down quickshifter and mobile phone connectivity as well as separately-heated rider and pillion seats and tyre pressure monitoring.

The Tiger 900 Rally and Rally Pro switch the alloy wheels for wires, with a 21-inch front and 17-inch rear. Both feature Showa suspension instead of Marzocchi, with far more travel – 240mm at the front, compared to 180mm on the base and GT models, and 230mm at the rear, up from 170mm. Seat height also rises 40mm. The differences between the Rally and Rally Pro are largely similar to those between the GT and GT Pro, focussing on additional electronics and riding modes. 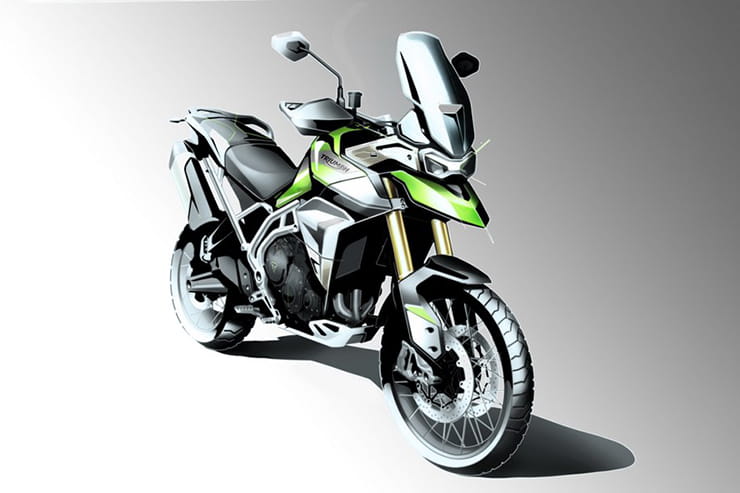 All five models share the same main mechanical components, with the centrepiece being the new 888cc three-cylinder engine.

Triumph claims that while the outright power isn’t increased, there’s 9% more mid-range. The engine also gets a new firing order, 1-3-2, instead of the old 1-2-3, which is said to improve ‘character and feel’. Without quoting any figures, Triumph says the Tiger 900 has better 0-60mph and 0-110mph acceleration than the old bike and improved sixth-gear roll-on acceleration. 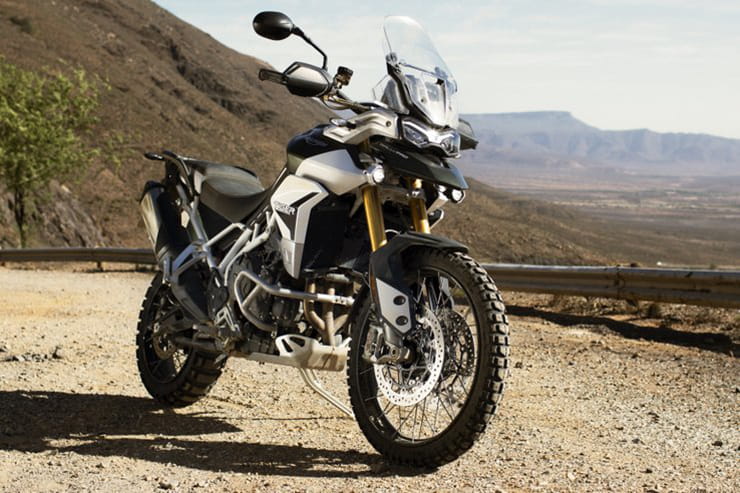 The engine sits lower and further forward in a new tubular steel frame, now featuring a bolt-on subframe. Two radiators, one on each side, allow the engine to be repositioned without interfering with the front wheel’s suspension travel, improving the weight distribution.

Triumph says the bike is up to 5kg lighter than its predecessor, with the base model’s dry weight coming in at 193kg. That rises to 194kg for the GT and 198kg for the GT Pro. The Rally is 196kg and the Rally Pro pushes the scales to 201kg.

All models use Brembo brakes, with Stylema Monobloc calipers at the front gripping 320mm discs. A single-piston Brembo and 255mm disc is fitted at the back.

As usual for adventure bikes, the Tiger 900 favours the longer-legged rider. The seat is adjustable on all versions, with the base model, GT and GT Pro offering 810mm and 830mm heights. The Rally and Rally Pro seats are from 850mm to 870mm off the ground.

As with the old model, there’s a ‘low’ model available for shorter riders, but only if they opt for the GT or GT Pro. Tick that box and suspension travel is reduced by 40mm at the front and 19mm at the back, while the seat height is adjustable from 760mm to 780mm. 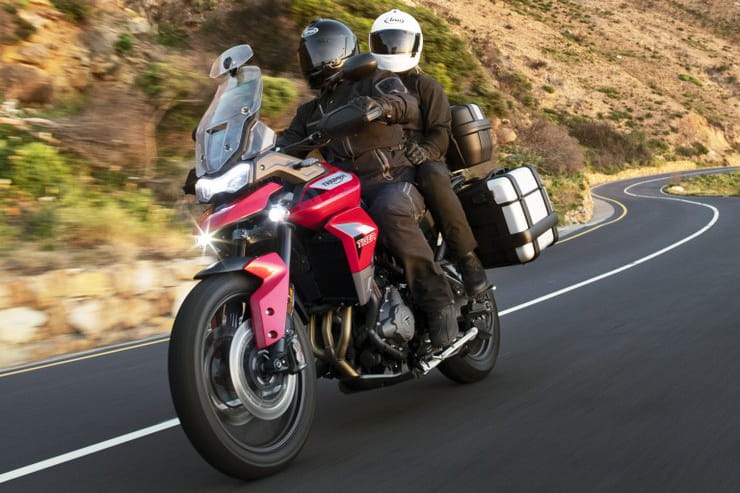 As ever, buying the bike is just the start as there’s a huge accessories list to dip into. Two types of luggage are on offer, both made by Givi. Trekker luggage includes a 52 litre top box – big enough for two helmets – and side-opening panniers. Alternatively, the ‘Expedition’ set combines top-opening panniers with a 42-litre top box.

Those same names are also applied to a pair of ‘inspiration kits’ that combine a package of accessories. The Trekker inspiration kit is more touring-biased and uses the Trekker luggage allied to a sliding carriage kit for the top box, a tank pad and a screen deflector. The Expedition inspiration kit is more off-road oriented with the Expedition panniers and top box, a 40-litre roll bag, headlight guard, fork protectors, a radiator guard, upper engine bars and LED fog lights.

Altogether Triumph promises more than 65 accessories for the new bikes so you can tailor the Tiger to your tastes.

Prices will start from £9500 OTR for the base model with other prices confirmed closer to the press riding launch in February) yet it's the GT and GT Pro bikes that will be in dealerships first, from March. 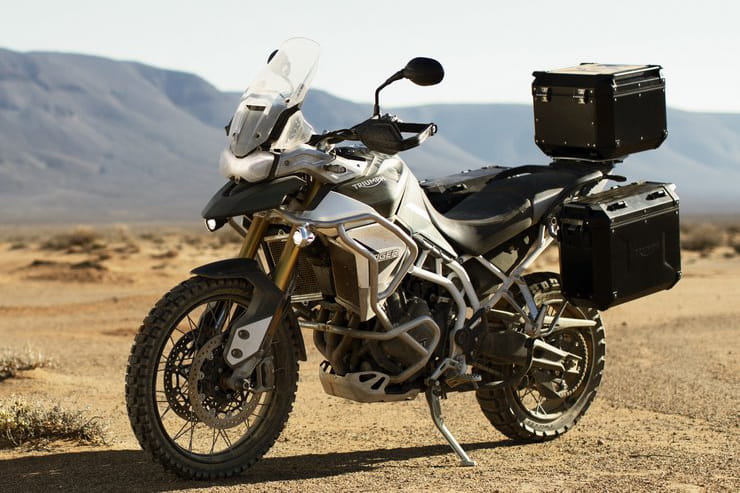