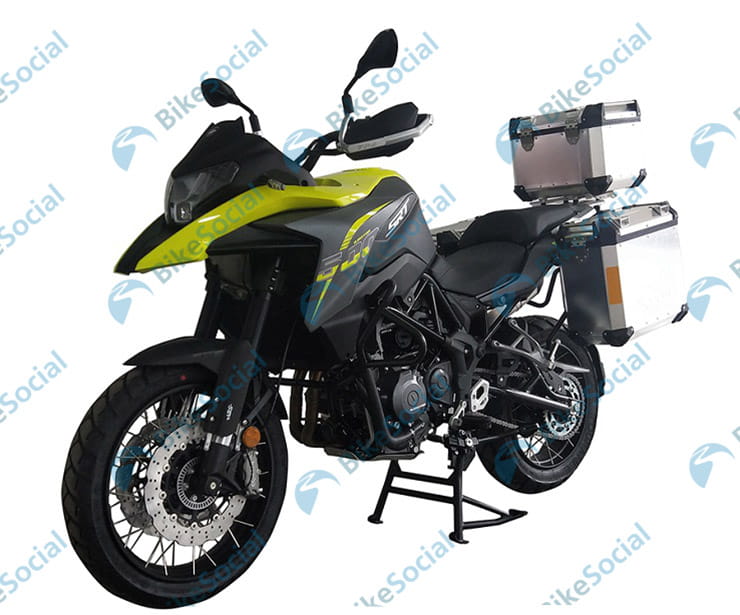 Benelli’s TRK502 is already the firm’s most successful offering as Italy’s third best-selling motorcycle. Now a new leaked image shows that its parent company is developing a new model that addresses one of its biggest weaknesses – the styling.

At the moment, the new bike – which has been revealed in Chinese type-approval documents – is badged as part of the newly-launched QJMotor brand. A subsidiary of Qianjiang, this is Benelli’s sister company, aimed at the high end of the Asian market. It’s already shown its first model, a derivative of Benelli’s TNT600i, and a host of others are coming including a faired 600cc sports bike, a 750cc twin-cylinder adventure bike and now this Benelli TRK502-based offering.

There will be at least three derivatives of the new machine, which wears ‘SRT500’ badges that line up with the QJMotor brand’s model-naming convention. The firm has already launched the ‘SRK600’ naked bike, while the upcoming faired model is to be called the ‘SRG600’ and the planned bigger adventure offering is the ‘SRB750’.

It’s clear at a glance that the mechanical parts of the bike are shared with the Benelli TRK502, including the same 500cc twin-cylinder engine and tubular steel chassis. Earlier this year we revealed planned updates for the TRK502 including an aluminium swingarm instead of the current tubular design, and that arm is also to be offered on at least one version of the SRT500, while others retain the older steel version.

The derivatives seen in the new documents include a road-oriented model with alloy wheels, Marzocchi forks and the aluminium swingarm, plus two wire-wheeled, off-road versions with the steel swingarm and different front suspension. Of these, one is higher-spec, with Brembo brakes, while the other uses unbranded calipers.

The biggest change is the styling. While the Benelli TRK502’s appearance is slightly cluttered, with an over-complicated front ‘beak’ and fairing panels covered in a mishmash of different planes, angles, curves and edges, the SRT500’s shapes are remarkably clean.

The result is a bike that, despite sharing the TRK502’s dimensions, looks smaller and more agile, with a hint of supermoto. The limited specs we’ve seen show it’s not just an illusion, either; the SRT500 is around 10kg lighter than the Benelli, at 225kg ready-to-ride.

The other spec change is a fractional power increase, from 35kW (47hp) for the Benelli to 36kW (48hp) for the QJMotor. That’s a reflection of the bike’s Asian-market aims, as the Benelli’s 35kW output is carefully tailored to meet European ‘A2’ licence rules.

Could the QJMotor SRT500’s styling be adopted by Benelli, either for an updated TRK502 or an additional model? It’s quite possible; despite the ‘QJMotor SRT500’ decals, the bike’s hand-guards have the Benelli ‘TRK’ logo moulded into their front edges…