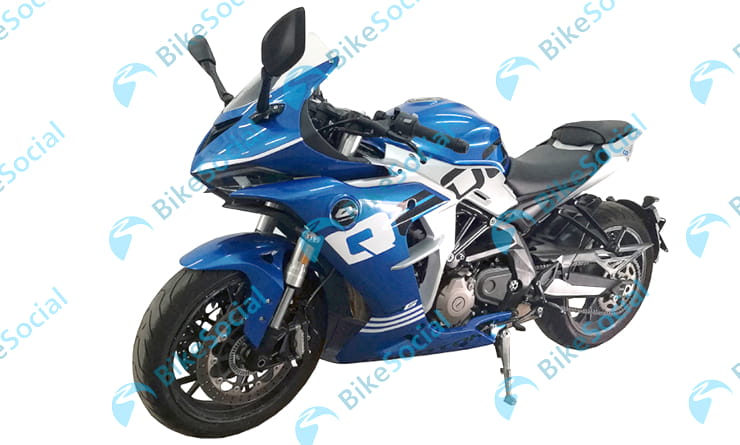 This year has been a busy one for Benelli as it scrambles to launch a range of new models over the next few months. Back in January we revealed that the firm planned new naked and faired 600cc fours, a TRK800 and an Imperiale 530 over the next few months – and now we’ve got the first pictures and details of the Benelli 600RR sports bike.

Over the last few weeks we’ve had glimpses of several new Benelli models. Most notably the new naked 600cc four has appeared in China, and that’s the bike the new 600RR is based on. As such it will get the same technology, including keyless ignition, backlit controls and a colour TFT dashboard, but wrapped in a fully-faired package to rival budget sports models like the Honda CBR650R and Kawasaki Ninja 650. 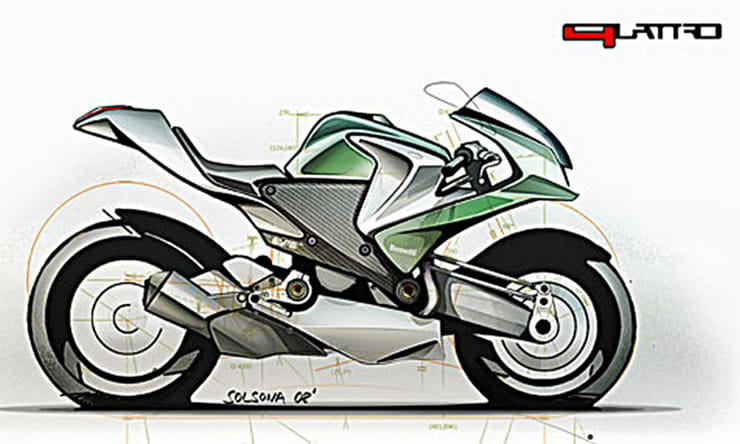 Benelli might have got out of the sports bike market when the Tornado 1130 dropped out of production in 2014 but it’s long had an eye on building a fully-faired, 600cc four. Even before the company was bought by Chinese giant Qianjiang in 2005 it was developing a four-cylinder engine with an eye to putting it in a hub-steered supersports bike, the Quattro (above), that was designed by Bimota Tesi creator Pierluigi Marconi. That bike never happened but the four-cylinder engine did reach production, powering the TNT600 naked bike.

Now the engine is finally reaching a faired sports bike in the Benelli 600RR. The picture seen at the top of this story reveals the bike in production-ready form, albeit wearing Chinese-market ‘QJiang’ branding. Under that brand it’s expected to be called the 600 SRG, matching the ‘600 SRK’ branding recently seen on spied examples of the new Benelli/QJiang naked bike. In Europe, though, it will wear Benelli badges, and the planning document revealed in January referred to it as the 600RR. 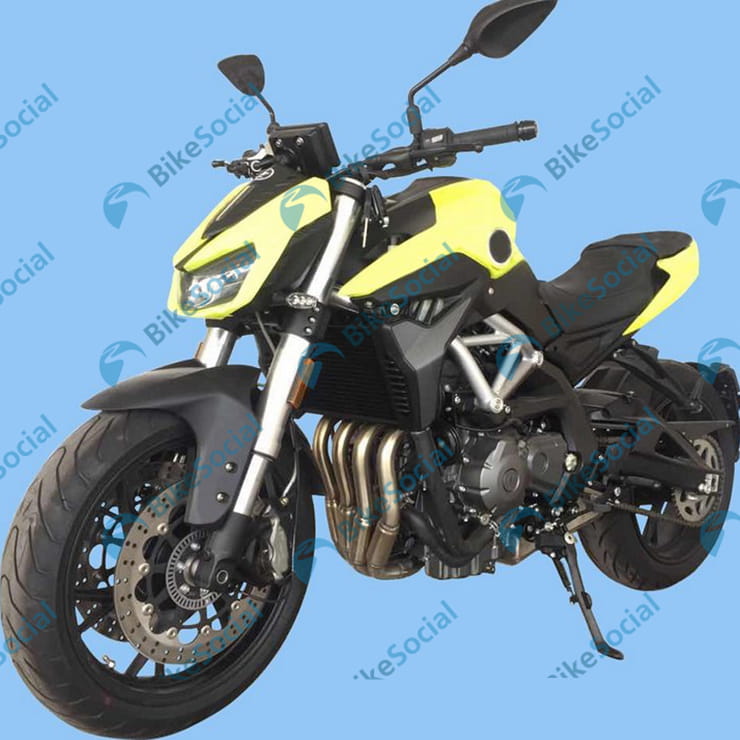 The chassis, like the engine, is basically carried over from the naked TNT600. Like the revamped 2020 version of the unfaired bike (above), the 600RR gets an under-belly exhaust instead of the under-seat cans of the old TNT, as well as a vast array of electronic updates.

The engine itself is tweaked to meet the latest emissions laws. In China, type-approval documents confirm that it complies with the current ‘China IV’ standards, which are equivalent to Euro 4. Over here it will need to meet Euro 5, but the inclusion of details like side reflectors on the fork legs are evidence that the bike is intended for export markets.

It’s also worth noting that the machine pictured here uses genuine Brembo brakes rather than the Benelli-branded calipers that feature on most of the firm’s machines, and the documents confirm they’re backed up by a Bosch 9.1MB ABS system. That’s decent kit, and again a nod to European legal compliance.

The same paperwork confirms that the engine makes 80hp, putting it between the Ninja 650 and CBR650R in terms of power. It’s clearly more at the budget end of the 600cc sports bike spectrum, but there are few direct rivals in that part of the market. At 215kg wet it’s not a featherweight, but neither is it vastly weightier than the Honda CBR650R that’s closest in terms of market position and specifications. 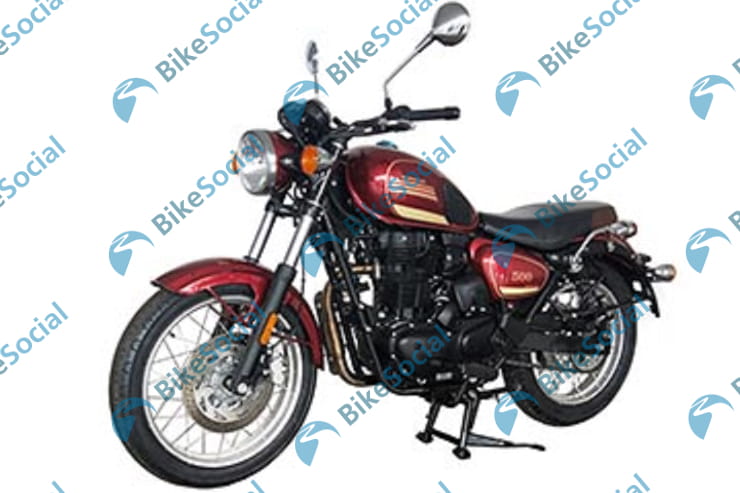 The Benelli 600RR wasn’t the only new machine revealed by the firm’s leaked release schedule earlier this year. An upsized version of the retro Imperiale 400 was also promised, called the Imperiale 530.

Like the 600RR, that bike has now passed Chinese type-approval and the resulting documents give an insight into its appearance and specification. Pictured above, the Imperiale 530 looks virtually identical to the 400, with just a new single-piece seat to separate it visually. The specs are also very similar – it’s actually 2kg lighter than the Imperiale 400 at 198kg, while the engine size rises from 374cc to 523cc. That’s probably achieved by increasing the bore from 72.7mm to 86mm while retaining the same 90mm stroke as the existing bike. Even with such a big increase in bore the engine will still be under-square, putting more emphasis on torque than revs and power.

Speaking of power, that rises from 21hp to 27hp according to the official paperwork. That’s not a recipe for performance, but bear in mind this is an air-cooled single that’s been tuned to meet current emissions rules. 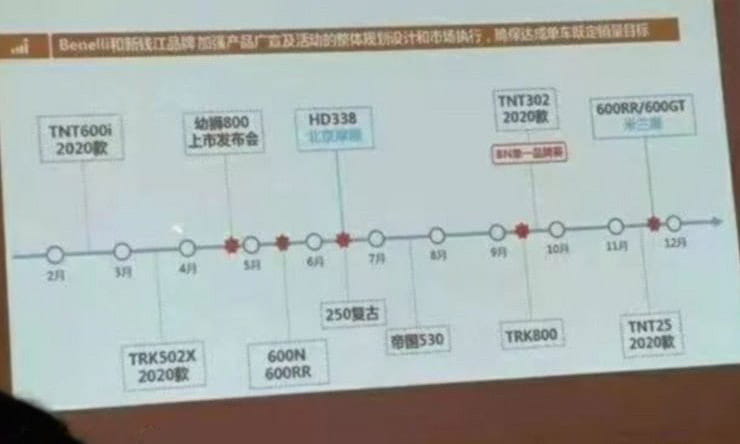 Benelli’s new model plan (above) shows that the 600RR is due to be revealed imminently, in either May or June, with production planned for near the end of the year. At that stage it’s also set to be joined by the 600GT – a sports-tourer based on the same chassis. Other new Benellis revealed on the plan also include the TRK800, an adventure bike based on the 752S’s parallel twin engine, and a new 250cc TNT25 towards the end of the year.

Also not the ‘HD338’ that’s due mid-year. This is the Benelli 302S-based Harley-Davidson that’s part of the American firm’s tie-in with QJiang.