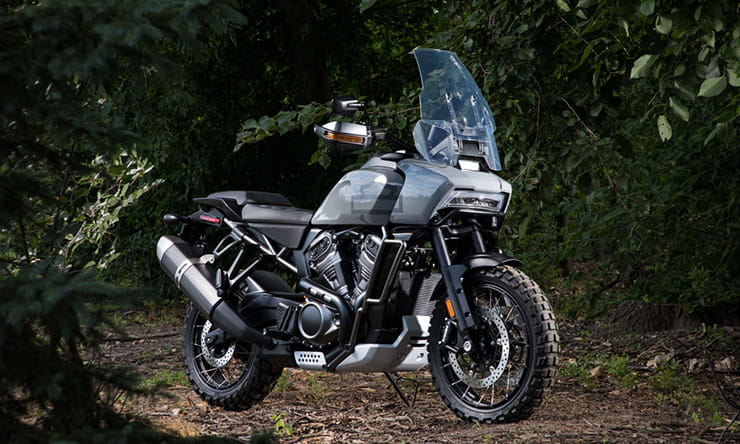 Harley-Davidsons struggles in the face of an ageing customer base and falling sales – not to mention the US-EU trade war – have been well documented. But the firm has just revealed the most extreme reinvention in its 115-year history; a move that will see Harley expand away from its cruiser-based comfort zone and into a host of new markets. 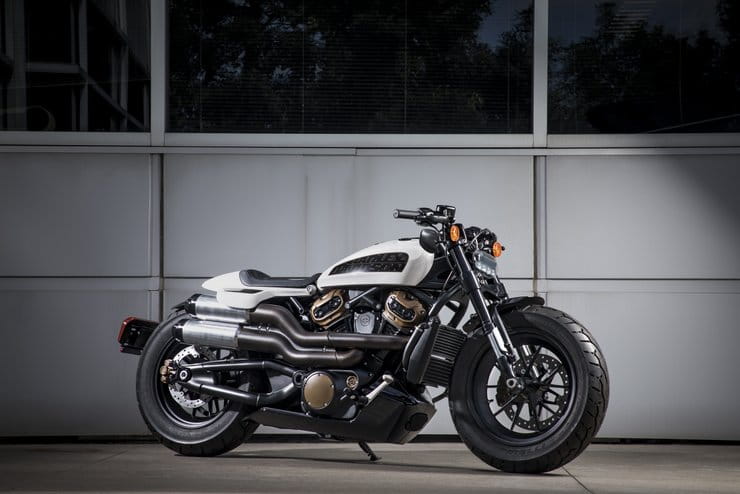 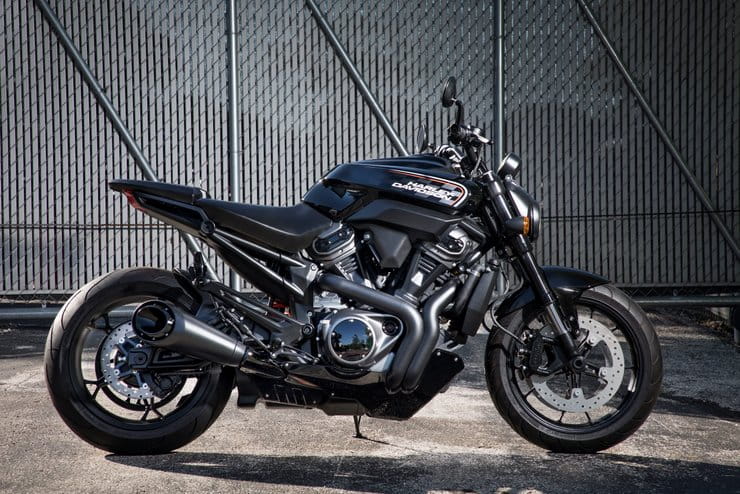 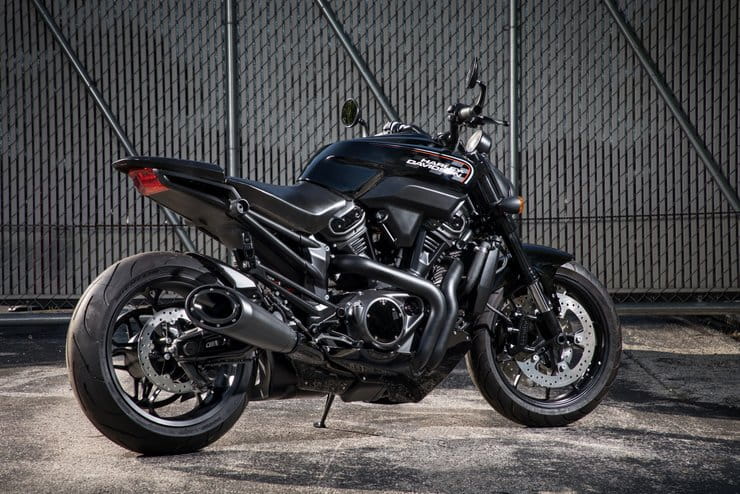 The image of Harley-Davidson might still be very much focussed around its custom cruisers and the traditional idea of bearded, ageing bikers in tasselled jackets and chaps, rumbling along to their ‘potato-potato’ soundtrack. But the line of middleweight V-twins it’s planning to introduce in 2020 will change all that.

The first – and most important – of the new bikes already has a name: Pan America. It’s Harley’s first entry in the burgeoning adventure touring class and will go on sale in less than two years’ time.

Revealed here in prototype form, the bike is set to appear in two sizes – a 975cc version and a 1250cc model – and while Harley is keeping quiet when it comes to specifications there’s no hiding the all-new water-cooled engine nestling under that radical-looking bodywork.

The motor doesn’t appear to share anything other than its V-twin configuration with any of Harley’s existing models, clearly using a DOHC cylinder head design and liquid cooling but not using parts from the existing Revolution X engine from the Street 750. All indications are that this is a completely modern engine, and that means it could be making something north of 150hp in its largest form. The Pan America’s massive aluminium swingarm suggests this is a bike that’s putting a lot of power down.

On the Pan America, that engine sits in a pretty convincing-looking adventure bike, with rugged styling that thankfully avoids clichés like a ‘beak’ and instead adopts a distinctive, rectangular headlight. The headlight is a little like the design used on the 2018 Fat Bob, suggesting this could become something of a new corporate ‘face’ for Harley’s non-traditional models.

Other visible elements on the Pan America include the adjustable screen and Brembo radial-mount calipers, although we’re hoping that ironing-board-flat seat is more comfortable than it looks.

Debuting at the same time as the Pan America, as part of Harley’s 2020 range, we’ll see this as-yet-unnamed streetfighter.

At least, it’s not named officially – Harley recently trademarked the name ‘Bronx’ for an upcoming new model, and that seems quite an appropriate title for the muscular-looking machine.

It’s part of a nine-bike line-up of naked streetfighters and ‘standard’ bikes, and clearly uses a variation of the same engine that’s appearing in the Pan America. The eventual nine-model range will run from 500cc to 1250cc, suggesting there will be 500cc and 750cc models using versions of the Street 500 and Street 750’s Revolution X V-twins as well as the larger models using the new engine.

Like the Pan America, the new streetfighter uses high-end suspension and brakes, the latter from Brembo, and appears to use an aluminium frame rather than the usual steel chassis. Unusually, the streetfighter appears to be designed to use belt drive rather than chain, but the old Buell 1125CR – Harley’s last attempt at a water-cooled streetfighter – showed that such drivetrains can cope with 150hp levels of power. 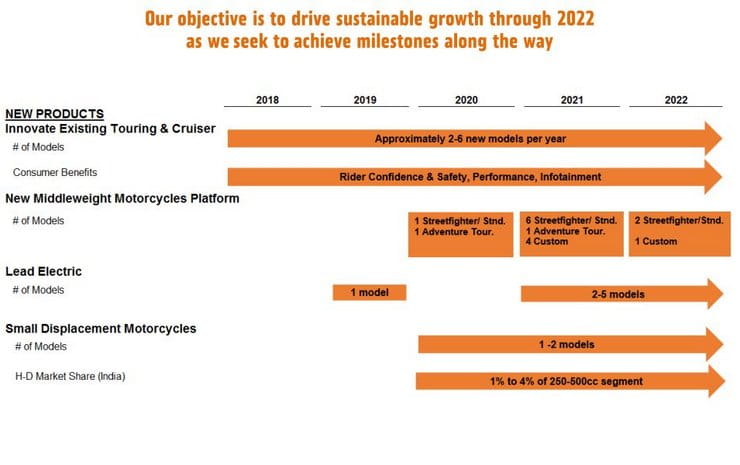 Harley isn’t completely deserting its traditional fan-base, and will also be offering the new water-cooled engine in a custom style bike – the white prototype in the images.

In fact, it promises that between 2021 and 2022 it will launch a five-model range from 500cc to 1250cc with this look, which again uses a rectangular headlight similar to the 2018 Fat Bob.

While it’s a more familiar Harley, the largest of the new bikes again promises to be rather more powerful than the company’s usual offerings. Again using a variant of the engine shown in the Pan America, its massive swingarm suggests there’s a lot of power to be handled, although the single front brake tells a different story. 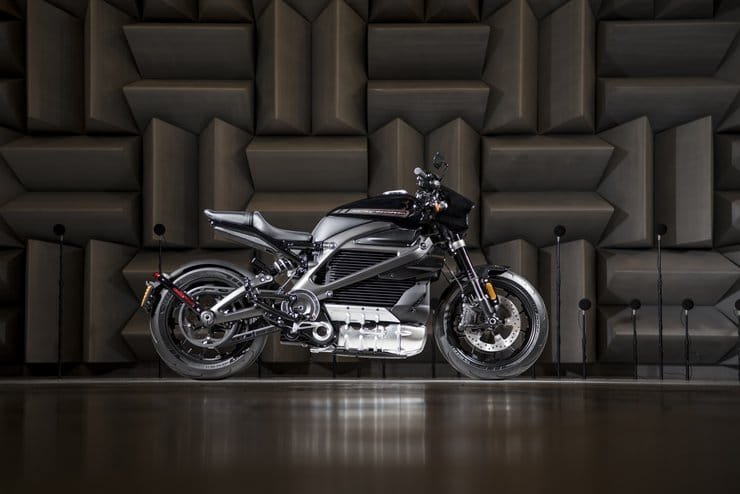 We’ve seen the LiveWire before in prototype form – and even ridden it – but now it’s confirmed for production in 2019, and this is what the showroom version is going to look like.

The bike hasn’t changed as much as we might have expected, still featuring very much the same chassis as the prototype, and with a similar-looking electric powertrain and battery. The tank shape is also basically unchanged, but ahead of it lies a new headlight design – again it seems to be taking on that rectangular motif – and behind there’s a new dual-seat rear end.

Again, we’ll have to wait to find out the all-important details about power, weight and range, but the first impressions are good.

Beyond the 2019 LiveWire introduction, there will be more electric Harley’s in 2021 and 2022. The firm is promising a further two electric motorcycle models, with more accessible pricing, and illustrates that idea with a rather fetching flat-tracker style concept sketch.

There will also be an as-yet-unknown number of smaller, cheaper and lower-performance ‘urban’ electric bikes, basically intended to rival scooters and pedelecs. Again, there’s no more to go on other than sketches showing skimpy, lightweight-looking machines with bicycle-style frames and, in one case, derailleur-style gears.

According to Harley’s plan, it will “launch a 250-500cc motorcycle within 2 years in India, and into other emerging markets in Asia over time.”

That might not be a move that instantly thrills European riders, but it’s one that might well be the most important of all Harley’s upcoming model plans.

By leveraging the insanely famous Harley-Davidson brand and applying it to bikes that riders some of the world’s largest and fastest-growing motorcycle markets can actually afford, Harley could be looking at an exponential increase in production. While profit margins in those lower-cost markets are slimmer, overall Harley production scale will increase massively.

To achieve this goal, Harley will team up with an as-yet-unannounced ‘world-class partner’ and use that firm’s manufacturing facilities and retail network.

Harley’s plan also involves changing the way it interacts with customers, putting a much greater focus on the internet and opening a new network of small, urban stores as well as enhancing the existing dealer network.

It wants to create an integrated ‘experience’, revamping its own H-D.com website but also expanding with alliances with existing e-commerce providers, particularly when it comes to apparel and merchandise.

The new urban stores will be smaller than traditional dealers, and are likely to put a greater emphasis on clothing and the new range of electric bikes than Harley’s stable cruiser model range.

On top of these, between now and 2022, Harley intends to open 25-35 new ‘full-line’ dealerships, although most of these will be in emerging markets.

Of course, all this isn’t going to come cheap. Harley is expecting to pump in $450-$550 million in operating investment between now and 2022, fairly evenly split between its retail changes, the electric bike plans and the new middleweight and small displacement models. It’s also putting in $225-$275 million in capital investment over the same period, with the majority going on developing the new models, both petrol and electric powered.

“The bold actions we are announcing today leverage Harley-Davidson’s vast capabilities and competitive firepower – our excellence in product development and manufacturing, the global appeal of the brand and of course, our great dealer network,” said Matt Levatich, president and chief executive officer of Harley-Davidson.

“Alongside our existing loyal riders, we will lead the next revolution of two-wheeled freedom to inspire future riders who have yet to even think about the thrill of riding.

“Harley-Davidson is iconic because we’ve never been static. In moving forward, we are tapping into the spirit that drove our founders back in 1903 and every one of the employees and dealers who rose to the challenges faced along the way.  Our plan will redefine existing boundaries of our brand – reaching more customers in a way that reinforces all we stand for as a brand and as a company and we can’t wait to kick it into gear.”

Harley builds streetfighters and adventure bikes, haven’t we been here before? Steve Rose thinks this time it could be different

Harley making adventure bikes, streetfighters and state-of-the-art electric vehicles is a bit like Guinness announcing they will now be making lager, or Apple unveiling their new Android phone. It could, in theory be a marketing disaster to end all disasters. But let’s be positive instead, what if they get it right?

If you’d have asked a TT fan in 2008 what bike would be the first to set a 135mph lap of the Mountain Course, I’m guessing few would have mentioned ‘BMW’. Back then most motorcycle journalists struggled to review a BMW without a tired joke about pipes and slippers. Oh, how we laughed. Ten years later BMW are a state-of-the-art, forward-thinking motorcycle company (like they always were), only now they have the brand and the image and respect among motorcyclists to match.

In that short time, they have turned around their image completely. So, for Harley to do the same is definitely achievable and, they’ve got a bit of history in these new markets from their Buell experience too. So, someone back at Milwaukee HQ should at least know what not to do. If BMW can become the company behind some of the world’s most desirable sports bikes, then why shouldn’t Harley take on the streetfighter, adventure bike or electric sectors? The only thing stopping any of us building a class-leading adventure bike is money, talent, a production facility, distribution network and some world-class marketing. Harley has access to all five and will hopefully have learned from the Buell experience that, once outside the custom market, it’s the quality and performance of the product that matters, not just the chrome and the noise. The adventure bike market is littered with the crushed and battered expectations of most of the major manufacturers. If HD are serious enough to be building a whole new family of engines, a new modular chassis and investing in the state-of-the-art electronics to control them, then you’d like to think they will go the last few yards and finish the job properly by actually building something riders want to buy.

And they know a lot about that. Harley knows how to keep its customers happy and it has the smartest marketing of any of the major manufacturers. If they get the bikes right, then this time you can bet your boots they’ll get the sales pitch and the offers right too because they’ll be selling Harleys, not some oddball Buell brand that no one outside of motorcycling has ever heard of.

It’s going to be fascinating to watch all this unfurl.