Triumph’s ability to spin multiple models from the same basic components is impressive enough to make even Ducati jealous but the latest spy shots show it’s still not finished with variations on the new Bonneville theme.

Since the 2015 unveiling of the all-new, water-cooled Bonnie platform, Triumph has wheeled out the T120, T120 Black, Thruxton, Thruxton R, Street Twin, Street Cup, Street Scrambler, T100, T100 Black and the Bobber. And each of them can be bought with various conversion packs to tailor them into even more sub-species.

Even so, Triumph has still retained a handful of the previous generation models, in particular the Bonnie-based America and Speedmaster cruisers. And this is the replacement for those bikes. 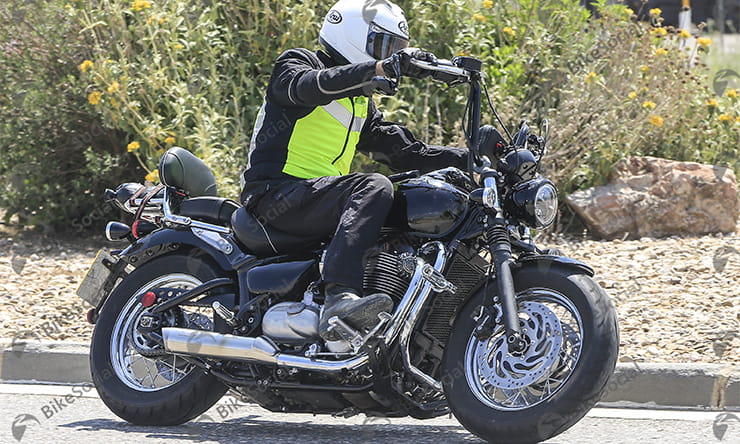 It’s often been said that Triumph is the only existing brand with the sort of heritage and credibility to be in a position to face up to all-conquering Harley-Davidson in the cruiser-centric American market. Knievel rode Triumphs before he contracted to Harley. Brando had on in The Wild One. McQueen’s Great Escape antics happened on a time-travelling, post-war Triumph.

So far, though, John Bloor’s Hinckley reinvention of Triumph hasn’t managed to capitalise on that US market credibility. The Rocket III, impressive as it is, remains an oddball rather than an obvious Harley alternative, and the Thunderbird doesn’t seem to have made the impact that was perhaps initially hoped for.

Will the new replacement for the America and Speedmaster finally take a bigger bike of Harley’s American market? Triumph will be hoping it does.

It’s clear from these shots that the bike is based heavily on the Bonneville Bobber. It’s got the same faux-hardtail chassis, with hidden rear suspension, but gains a rear subframe to allow a pillion seat to be added. A new back mudguard, sorry, fender, is also clear to see. It seems this prototype is wearing a full bevy of kit from inevitably-massive options catalogue, too. Those ape-hanger bars, for instance, aren’t likely to be standard, and nor is the sissy bar or crash bars and their unfathomably-positioned highway pegs. If the rider was to put his feet on those, he’d look like he was giving birth to the fuel tank. Or, worse, having it inserted somewhere…

The slash-cut pipes also appear to be option add-ons. All this means the prototype spied here is something of an overblown mess; you need to look past all those bolted-on extras to see that the underlying shape could actually be a reasonably clean-looking, retro, cruiser.

The engine appears to be the same 1200cc variation on the new Bonnie theme that’s already used in the Bobber. Made for torque rather than power, it makes 76bhp and a decent 106Nm of torque. Unlike the Bobber, which makes do with a single front brake disc, the cruiser carries twin front brakes. That’s probably a nod to the fact it’s likely to be used with a pillion and luggage, giving them substantially more mass to stop than the single-seat, stripped-down Bobber. Given that the Bobber is 228kg dry, the cruiser is likely to be well over the 250kg mark before fluids are added.

The chances are that Triumph will offer several different variations of the new cruiser, but it may opt to give them new names instead of directly replacing the Speedmaster and America models. It’s fair to expect that there will be a variety of different bars, mudguards and wheels to create several different looks.

Like the rest of the new Bonneville range, the bike will use fuel injection and ride-by-wire to allow multiple engine modes and traction control to be used. There are a couple of visual clues that it’s not purely retro, too – note the LED indicators and the new, split-level headlight design. It’s also got a multi-function display on the trad-looking single, round speedo.

Just as on the rest of the new Bonnevilles, the bike’s Euro4-compliant exhaust cleverly hides its catalytic converter under the front of the engine. The chrome pipes give the illusion that the exhaust runs straight from the cylinder head to the small end cans, but part is just a dummy section that hides the way the gasses are really routed into the hidden catalyst.

Although this is the first time the new cruiser has been spied, it’s clearly been under development for quite some time. All indications are that this is a near-production version, now in the process of testing the aftermarket catalogue of parts. That, and the fact that so many bolt-on bits have already been made, suggests that it will be launched fairly soon – probably at one of this autumn’s big bike shows, with full production starting in early 2018.

Other Triumph News and Reviews