David Beckham’s choice of bike for his Belstaff short film released last Autumn was the new Thruxton R, a modern and sporty version of a classic cafe racer.  It was Beckham himself who was responsible for doing the deal directly with Triumph such was his enthusiasm for the project and for getting the right bike. In fact, the bike stared in the film before it had been formally unveiled by Triumph.

Available in UK dealerships in late April with a price tag starting at £11,700 (£10,400 for the standard version), Bike Social was invited to the press riding launch on the outskirts of the Portuguese capital of Lisbon to assess just why Mr Beckham rated the Triumph Thruxton R so highly. 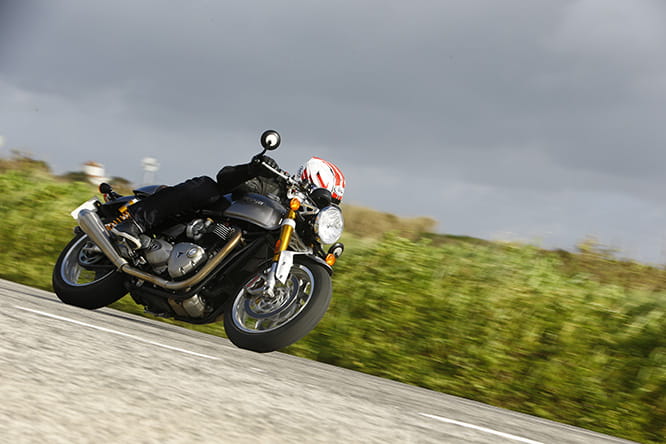 The two Thruxton models (a standard version and an ‘R’) form part of the revised five-strong Bonneville line-up for Triumph this year. These two beautiful machines plus the T120 and T120 Black are equipped with a brand new 1200cc liquid-cooled parallel twin engine, albeit in slightly differing variants, more of that later.

A brief history lesson first of all; the Thruxton name was influenced by the Hampshire-based airfield which later became a motor racing circuit and host of the highly acclaimed Thruxton 500 endurance race which Triumph dominated taking the first three places in 1969. A performance version of the T120 Bonneville was hand-built and known as the T120 Thruxton which was the beginnings of an icon.

Triumph revived the Thruxton name in 2004, with an air-cooled 865cc cafe racer styled version of the new generation Bonneville which spent 12 years in the range.

And here we are today with a brand new from the ground up motorcycle and we’re hearing that dealerships are already struggling to get in as much stock as possible such is the level of demand for the duo. The modern classic cafe racer gels some iconic and authentic styling with heaps of modern engineering and technology. And it really does ride as well as it looks. 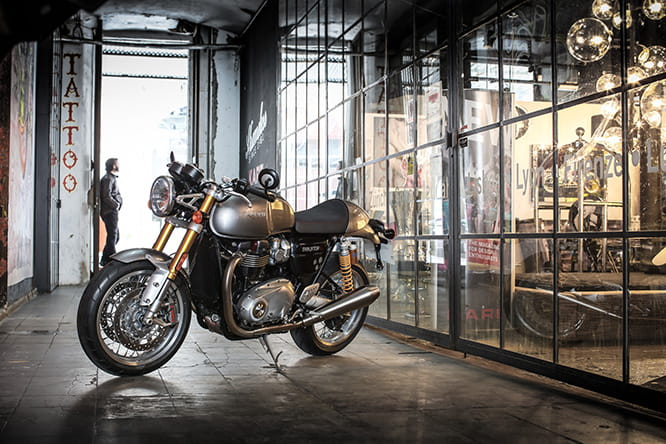 It’s an assault on the senses; not only a stylish, sexy bike to look at, it sounds stunning too. The exhaust note from the stainless steel (on the R, they’re chrome on the standard bike) upswept reverse megaphone-style twin end cans offers a burbly roar, deep and rich. At the risk of being branded a hooligan, dip the clutch and give the throttle a handful in the middle of town and watch the look on pedestrians’ faces – most will love it. You certainly will.

Speaking of senses, it’s great to touch too. Thin handlebars, easy-to-navigate control buttons offering rider mode settings and the usual headlight and indicator options are all of equal high quality finish and further add to the Triumph’s appeal. So because it’s brand new and it’s a motorbike, it therefore automatically smells good that only leaves taste and while I refrained from giving it a lick to complete the five senses, I’m sure it would be delicious, like brandy – refined yet powerful! Here is a bike that will always put you in a good mood. 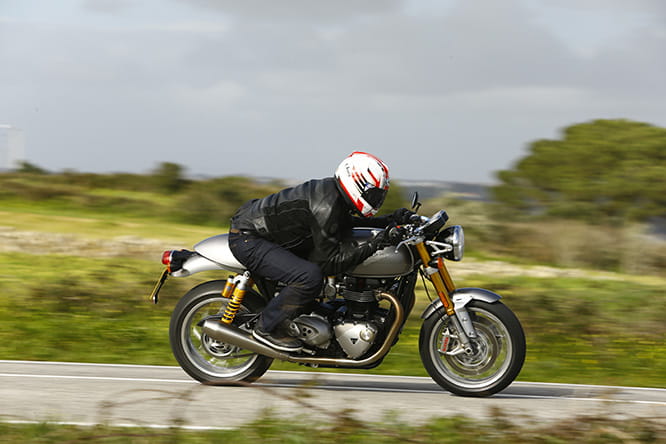 The Thruxton is equipped with a ‘high power’ version of Triumph’s new 1200cc twin cylinder motor, producing 96 bhp at 6,750rpm and 82.6 ft-lbs torque at 4,950rpm, a massive increase of 41% and 62% over the outgoing Thruxton model respectively. It’s vibrant, and its low inertia crank gives you just the right amount of feeling through the chassis, pegs, bars and seat to reassure you that the engine is responding to your every input. Some bikes can be too teeth-chatteringly throbby but the Thruxton’s degree of mechanical feedback is just right to remind you of its history each time it pulses enthusiastically beneath. The gearbox is sweet with easy up and downshifts, often clutchless just with the slightest of rolling off of the throttle. The gears on the Thruxton are smaller and have a shorter space between them than the T120 Bonneville, the front and rear sprockets are also different sizes given the Thruxton’s more sportier DNA. It means the Thruxton is more revvy and responds well to being kept higher up the range, closer to the 7000 red line. Be warned, give it a handful and the speed of the acceleration will quickly eat up and then run out of revs. Click up and the bike continues to pull hard rewarding you for keeping it between 5000-6500rpm with a cracking ride, as if it wants to be ridden like the sportsbikes at the start of its ancestral line used to be. For a sweeping 45mph corner the bike feels stable and comfortable even at the top of 2nd gear, take it in 3rd and the engine note deepens but you still get the drive.

The throttle action plus both clutch and brake levers are light, smooth and easy to operate while the handlebar-mounted mirrors add to the overall styling and are both useful and easy to manipulate into the right position should you be mixing up your riding positions.

Adding to the rideability of the current day Thruxton and Thruxton R are contemporary features such as the three level rider modes: Rain, Road and Sport all of which link to the ride-by-wire system. Each were tested and offer no adjustment in maximum power but instead affect the sharpness of the throttle’s response through the speed at which the butterfly valve opens. Sport certainly lives up to its name and threatens to overrule the traction control under hard acceleration from a standing start, the front wheel lifting a little in the first two gears with zero wheelie encouragement. Meanwhile, in Rain setting, there’s a slight, and I mean very slight, snatch in the microscopic amount of throttle travel between off and on throttle should you be crawling through slow moving traffic.

Rider modes can be adjusted while riding with a flick of the appropriately named ‘Mode’ button until your desired one flashed on the instrument panel, roll off the throttle for as long as it takes to whip the clutch in and out. Done. 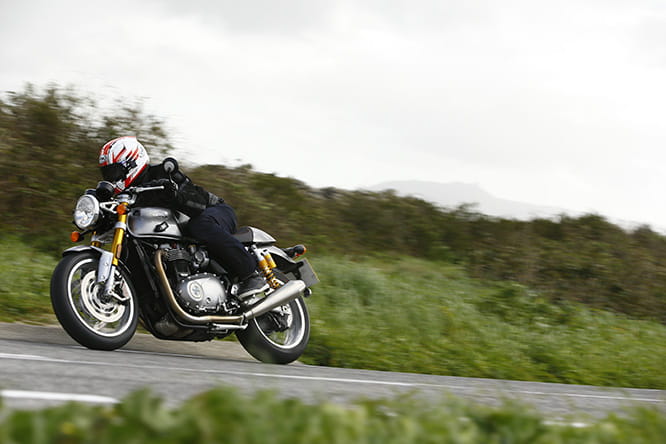 The Thruxton R is an extremely well balanced bike. Narrow with a slender seat waist, it encourages the rider to sit back and lay as flat as possible over the tank gripping with the knees in a true classic racer pose. This is where you get the most out of the bike. Its side profile doesn’t shout sportbike yet the most comfortable riding position does. It’s certainly easier on the wrists that way!

The raised clip-ons offer plenty of lock to lock (for a cafe racer) allowing for easy manoeuvrability at low or no speed. The front end is equipped with race-bred and fully adjustable Showa big piston forks while the twin rear Ohlins shocks are also adjustable, both sets of suspension direct the high spec Pirelli Diablo Rosso Corsa’s. Over the lumps and bumps it’s the seat that gives the game away. For all the good the suspension is doing, the relatively unpadded and therefore the authentic seat doesn’t offer the most comfortable ride for my derriere. The suspension, set in completely out-of-the-dealership standard form, settles the bike well even if committed in a corner and you catch an abnormality in the tarmac. A sentiment echoed by seven-time world champion and Triumph ambassador, Carl Fogarty. The Pirelli’s gripped extremely well from a mixture of road surfaces to hard braking, they’re a wise choice for such a bike.

Noticeable about the Thruxton R is the attention to detail that Triumph’s engineers have gone to. The care and quality of the finish is exceptional and as you swing a leg over, the feeling that some people in a factory near Leicester spent time to complete this four-year project with the care is deserved adds to the overall riding experience.

The big 310mm Brembo floating twin disc brakes are both strong and sturdy, there’s a degree of engine braking but feel reassured that the ABS-equipped Brembo monoblocs are more than capable with the lightest of touches on the lever.

Triumph has created something very special with the latest model to proudly carry the Thruxton name. While the marketing chaps will drill words like icon, legend and authentic into presentations and web pages, I’d urge you to get on the bike, feel the engine, hear the exhaust, drop your visor and give it a whirl and you’ll understand why words like that are used. It’s not just hyperbole. Either that or I’ve been completely sucked in by it.

According to the Hinckley-based manufacturer, the Thruxton’s competition as BMW’s RnineT, Norton Commando 961 Cafe Racer, Yamaha XJR1300 and Moto Guzzi’s V7 Racer. The Triumph is certainly the sportier in appearance and rider position despite loosing out to the BMW on bhp figures.

Switchable traction control, a slip assist clutch, twin clocks, daytime running lights at the front and an LED rear light plus an under-seat USB charging port all add to the Thruxton’s appeal. And because service intervals are now extended to 10,000 miles and the bike is cleaner emission-wise plus a claimed 11% more economic with an indicated mpg of 45.3 after the 88 miles covered on the press ride, the new Thruxton certainly seems to be a winner for your wallet too.

Over 160 dedicated accessories are available for owners to customise their Thruxton’s, including a pillion seat and pegs, and like the other Bonnevilles, the Midlands-based manufacturer has produced some inspiration models using a handful of the official accessories; ‘Track Racer’(£1620) - possibly one of the most beautiful bikes I’ve ever seen, a ‘Cafe Racer’ (£1295) and the ‘Race Kit’ – designed for circuit use only with a price and more info due later in the summer. These prices don’t include fitting by the way.

When the Thruxton and Thruxton R land in UK dealerships, which should be by the end of April, be quick because they’re in high demand but grab yourself a test ride and have a think about how your senses are aroused, particularly your hearing.

David Beckham may well have the nose to smell out a genuinely terrific bike. That said, he has been seen roaming around LA on a Confederate Hellcat. Oh well, we all make mistakes! 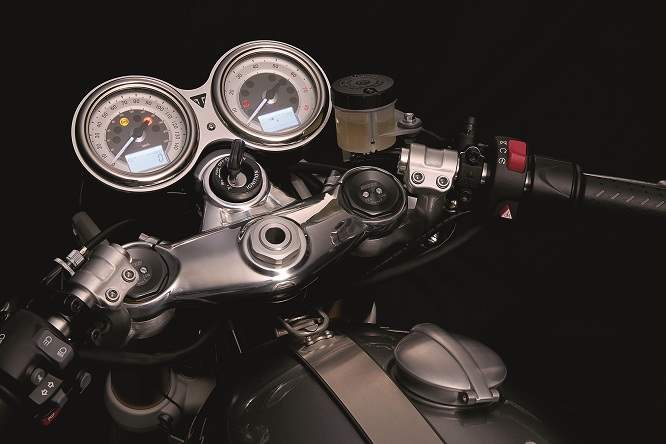 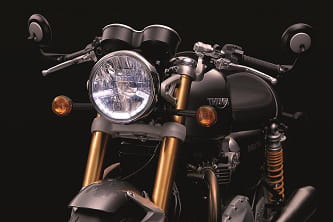 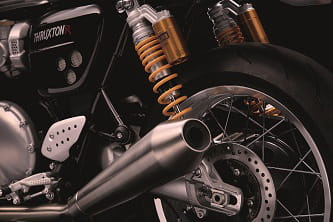 Do you have a Thruxton R on your shopping list?