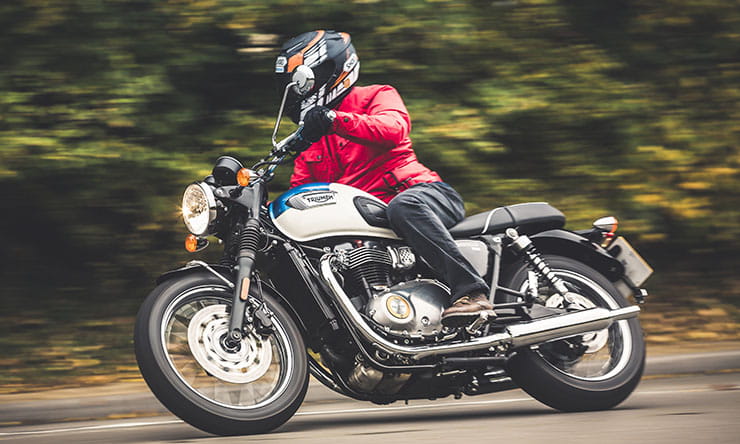 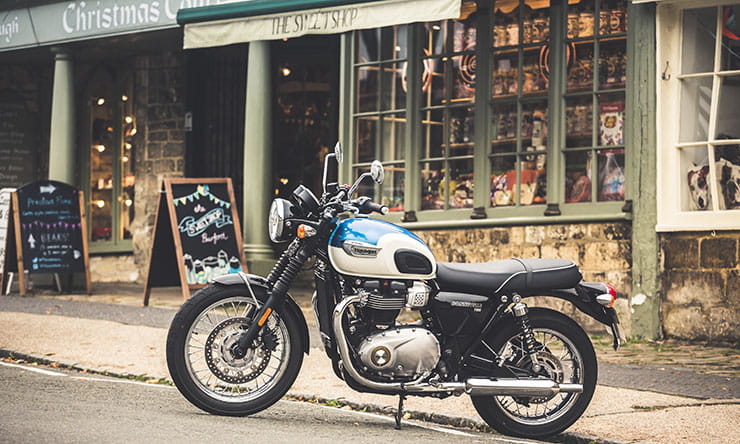 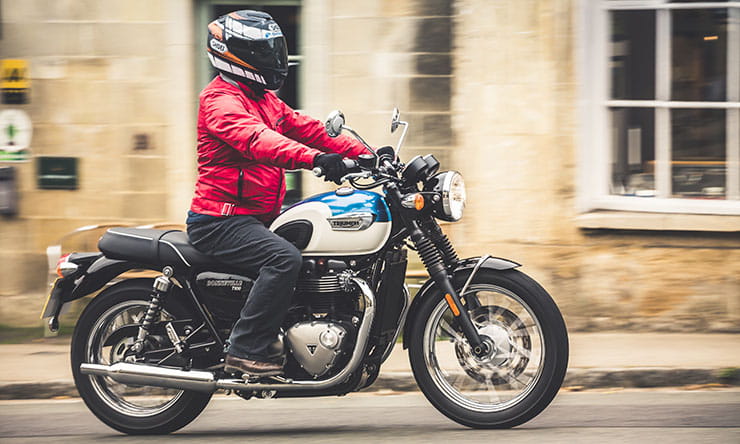 It’s cold, wet and miserable – and I’m grumpy. I’m full of the ‘flu and have just spent the last hour lost in Leicester, en route to Hinckley, home of Triumph, to ride the new Bonneville T100.

After the glitz and glamour of the new Bonneville Bobber unveiling a few weeks ago, it’s as low key a launch as we’ve probably ever seen from the British manufacturer. The lack of pizzazz suggests that the T100 doesn’t warrant being shouted about, and my expectation level isn’t raised any when I’m simply thrown the keys to a T100 and told to head out on the road. Normally with these things you are wined and dined, while a man in a corporate shirt slowly and painfully delivers death by PowerPoint for dessert. Maybe today would be a good day after all…

Climbing aboard the T100 feels refreshingly reassuring, and familiar to anyone who’s ever ridden one of the classically styled Triumphs. It’s low and narrow, with a 790mm seat height, while the twin clocks are beautifully classical in design. The motor fires with barely a whisper and both the clutch and gearbox, previously an achilles heel for Triumph, are delightfully light and precise.

Triumph are marketing the T100 as ‘all-new’ although they’re probably sailing a bit close to the wind with that. What it is, in reality, is a 900cc version of the Bonneville T120 that was launched last year, or a T120 with a Street Twin engine if you want to put it another way. At £8300, it sits neatly between the £7500 Street Twin and the £9800 T120 and, along with the Bobber and recently announced Street Cup, helps fill even more niches in Triumph’s classic range.

And it is no bad thing. Triumph’s Street Twin was one of my favourite bikes in the retro group test we held earlier this year, although it did feel too budget and entry level in many ways.

The T100 shares its 54bhp engine with the Street Twin but it’s housed in a far more premium feeling chassis, which is more or less shared with the T120 that was also launched 12 months ago.

Differences between the T100 and T120 include the brakes, with the T120 having a twin disc set-up to the single stopper specced on the 900, it also foregoes a centre stand and grab rail, as well as the T120’s factory-fitted heated grips. The geometry is claimed to be slightly different too, giving the 900 a 5mm longer wheelbase. The T100 is also missing the faux carb bodies that adorn the 1200 models. That’s a good thing in my book. We are living in 2016, after all.

As the new model uses the Street Twin’s motor, the T100 also loses the T120’s selectable riding modes and only has a five speed 'box, but it does come well specified with ABS, traction control and lots of neat little features that include a USB charging socket, neat LED lights and a comprehensive twin clock instrument set-up.

The colours also give the T100 a top-end feel that belies the budget price. Options are two-tone Aegean Blue and Fusion White, or Intense Orange with New England White, as well as plain Jet Black option. There’s also a T100 Black, which is listed as a separate model, which features blacked out engine cases, rims and exhausts and comes with on-trend matt or jet black paintwork (pictured below). 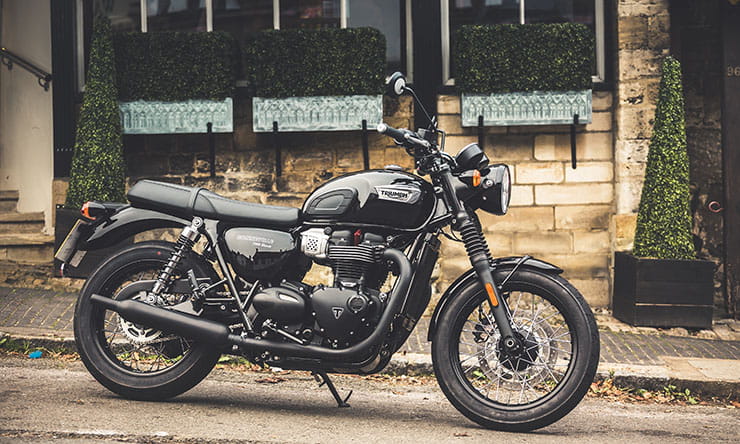 Compared to the last T100, which left the Triumph range at the end of 2015, the latest incarnation feels light years ahead in terms of refinement. Looking at my notes, the words ‘nice’, ‘easy’ and ‘smooth’ appear on a frequent basis. At 213kg, the T100 is a heavy bike for what it is, but it carries it so well for the figure to be totally and utterly irrelevant. It’s a doddle to manoeuvre and it’s agile enough on the open road, although obviously not in sports bike territory. The traditional wire wheels come shod with Pirelli rubber claimed to have been developed especially for the Triumph classic range, and they are more than up to the job required of it.

The T100 turned my bad day good. The ride from Hinckley, along the Fosse Way to the Cotswolds was supremely relaxing and sticking to legal speeds there’s probably no bike that I would rather have been on.

In my mind, the T100 is the best and most relevant of the Triumph classic range. It is such a step up in quality from the Street Twin that it seems almost crazy that you’d consider the cheaper bike, unless you really are on a tight budget or need the shorter seat height of the Street, which at 750mm is one of the lowest ‘standards’ you can buy. From the additional spec, improved suspension and general detailing, the T100 is in a different league to the Street Twin.

Triumph probably won't thank me for this, but I also found myself asking why I’d take a T120 over the smaller T100. Sure, there were times when a little extra shove would have been welcomed during overtakes, and a sixth gear would have been nice on the dual carriageway, but the top speed of naked bikes is regulated by the laws of aerodynamics anyway, and anything north of the legal speed limit had me backing off for comfort's sake. For the Bonneville’s natural environment, namely on the city streets and as a Sunday morning A road swinger, I’m scratching my head and wondering why I wouldn’t want to leave that extra £1500 in the bank. It was only really when I was carrying a pillion that I yearned for the extra power of the 1200.

Everyone in the BikeSocial office knows me as the most cynical and critical member of the team, so I must have found something I don’t like, right?

Hmm, I think that Triumph have stumped me on this one. If I have to criticise, then maybe it is just a bit too perfect. That engine is just so refined. The twin pea shooter silencers emit a pleasant enough tone, but there’s no feeling of mechanical drama underneath whatsoever. On other classic style bikes, such as a Harley or Ducati Scrambler, the seat of the pants dyno tells you when to shift up. They have vibes and noise and chattering, but on the T100 it’s just smooth, smooth, smooth… rev limiter. It feels like the limiter cuts in harshly at around 7000rpm, but that’s really only because there’s no warning it’s coming. The engine is at its sweetest above 5,000rpm, but it drives so well from zero that you can ride it how you want, when you want.

Despite the lower price, I reckon that Triumph will sell more T120s than T100s here in the UK, where the average rider is that bit older.

One of the key factors with the T100 is that it is also available in an A2 licence-friendly version that allows it to be ridden by new riders as young as 19. That might be more appealing to kids on the streets of Paris and Rome than it is the yoofs of London but with classic being the new cool, it opens up an important new market for them in continental Europe.

But if it’s my own money, I’d be taking the T100. It’s a little lighter and easier to manage than the T120 and looks identical to the full-fat version to all but the real anoraks. I’d take my grand and a half saving to stick some rorty silencers and a few Triumph accessories on my Bonnie.

Maybe that’s the reason for the low key launch. Perhaps Triumph want to keep the T100 their little secret and stop it stealing the limelight from the (more expensive) headline act.

Whatever the reason for the low profile, the T100 certainly put a smile on my face. 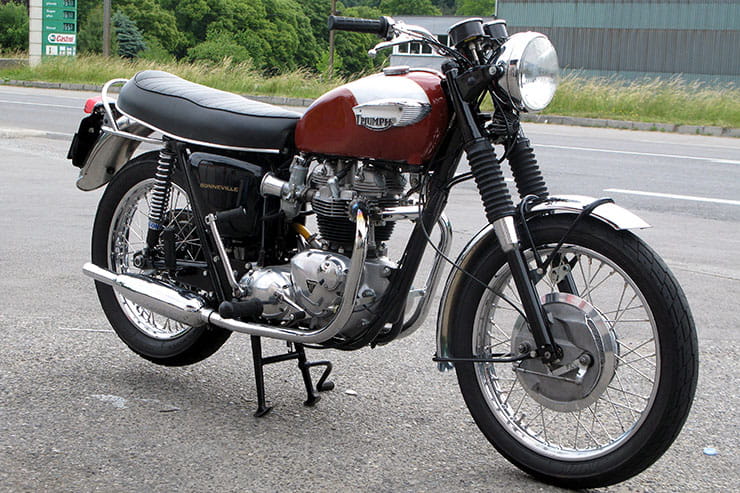 What's in a name?

The T100 moniker follows a long Triumph tradition of intimating the bike’s theoretical top speed in miles per hour through the model name.

Triumph patriarch Edward Turner first introduced the concept in the late 1930s, when the Tiger 70 was launched.

The T100 designation first appeared in 1939, on the 650cc Tiger T100 that replaced the legendary Speed Twin as Triumph’s sportiest model.

When the first Bonnevilles were introduced to the world in 1959, the twin carb superbike was optimistically designated T120, while the marketing man got increasingly creative as they launched the 750cc Bonneville T140 and the three-cylinder Trident T150.

The T designation was reintroduced by the new Triumph company in 2002, its centenary year, with the Bonneville T100 – an upspecced version of the classically styled, new generation, Bonneville. That bike ran, in 865cc form, until the end of last year, when it was replaced by the new, 1200cc, Bonneville T120.

Thanks to Triumph for the loan of the T100 and to ace snapper Jason Critchell for the pictures.