How’s your day going? Are you feeling worked up, stressed? Has it been a busy week? Is the boss working you too hard or are suppliers making false promises? Don’t worry, I’ve found the solution. Forget the spa, cinema, a round of golf or tinkering under the bonnet in the solace of your own garage, just take Triumph’s new Bonneville T120 out for an hour, it’ll sort you right out. 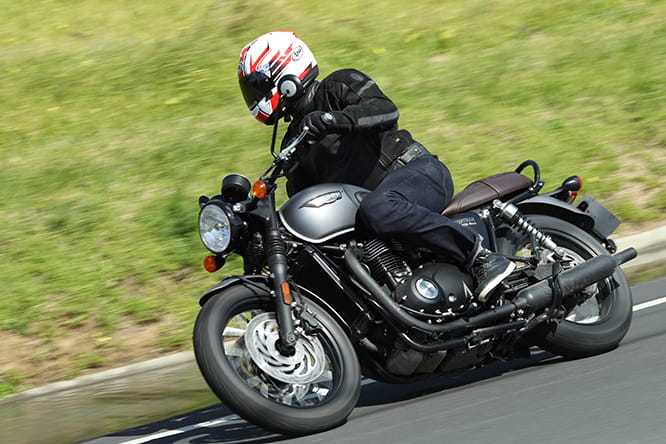 Taking its styling inspiration from the classic ’59 and ‘68 Bonneville’s but introduced as a brand new bike for 2016, 57 years after the original launched, the T120 forms part of the new Bonneville range for this year. In fact, Triumph are to release two versions into UK dealerships in April with little other than aesthetical differences between them; known simply as the T120 and T120 Black. Both have the same £9600 starting price with a bit extra on top depending on your preferred colour.

The riding launch of the new T120 in its ‘Black’ guise took place on the outskirts of the Portuguese capital of Lisbon this week and Bike Social was invited along to spend a morning on the new bike.

Modern classics is the fastest growing category for Triumph and are appealing to a range of ages say the Hinckley manufacturer. Will it encourage more people to ride? Who knows but if motorcycling particularly in this category is, as some believe, becoming more fashionable, mainstream and dare I say it trendy then the likes of Ducati, Yamaha and Triumph will reap the rewards with their cluster of modern day, budget-friendly, accessible fashion bikes that are already proving popular.

Starting with a heritage style then building in a host of modern-day technology to create a soulful machine capable of holding onto the character of its evolutionary family tree while providing the rider with safety and comfort features seems like a recipe for success for Triumph. In the T120 Black, the British firm has created a motorcycle that is relaxing and enjoyable to ride without becoming too…vanilla. It retains a healthy degree of thumpy mechanicalness which should appeal to both new riders and those familiar with the original bikes. 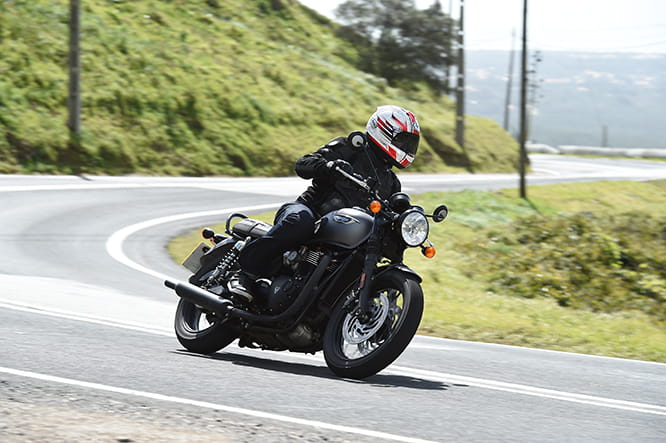 At first glance it’s easy to see the styling influence of the model, especially the standard T120 in the relevant colours to the ’59 and ’68 bikes. In my eyes, the T120 Black in the Matt Graphite colour looks super smart. Bang on trend, the fashionistas may say.

But while design components remain, this is a completely new motorcycle. Not one piece from the outgoing version makes it into the new bike even though the “focus has been evolution not recreation,” say Triumph.

And the biggest change is with the completely new engine. A liquid-cooled, 1200cc, eight valve, parallel twin ‘high torque’ motor has been designed to deliver more power, lower-down. It has the same dimensions as the outgoing 900 so proportionally the bike is no bigger despite a big hike in engine capacity. In terms of performance the new bike does exactly what its engine says it does, provide low down torque for an emphatic and instant drive out of each gear. The previous Bonneville T100 made its peak torque at 6800rpm while the new T120 provides an almost instant hit, maxing at 77.5 ft-lbs at 3100rpm, a 54% increase. Slot the bike up into second gear and the amount of forward motion is surprising as the clutch lever springs out.

Power is up too throughout the rev range, peaking at 79bhp @ 6550rpm and as high as a 50% increase at 4500rpm. It certainly doesn’t hang about for a bike that is more at home on a relaxing, gentlemanly journey than a thrash around the countryside. Sedate, upright and chilled is what the T120 is all about. Though get it leaned over and the sturdy chassis and suspension combo plus Pirelli Phantom tyres work well together. Too well if you happen to be a foot-peg mounted hero blob. All three elements have been purposefully developed for this bike. The Kabaya forks at the front and shocks at the rear maybe a little budget in their appearance but suit the look and actually I found the suspension more than capable for the style of riding the T120 is designed for. 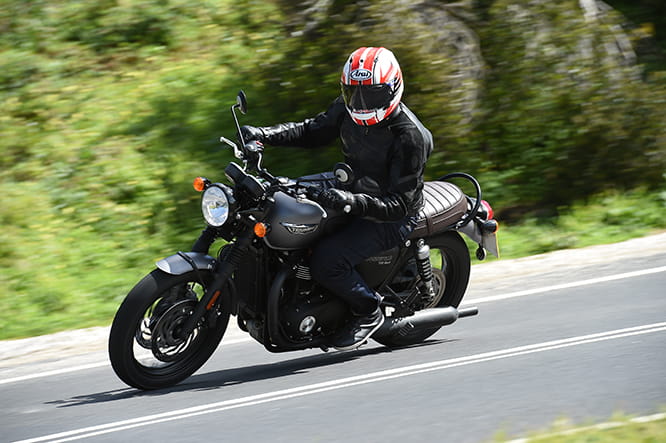 Weighing a meaty 224kg dry, so that’s without fuel, brake fluid etc lead to a double-take when I saw the spec sheet but the bike doesn’t feel as heavy as it perhaps should. In fact, it’s more noticeable on the smaller Bonnevile, the Street Twin, especially at the front end, while the T120 feels sturdy without being too cumbersome and the weight seems to be distributed well.

With Triumph’s next generation ride-by-wire fuel-injection and engine management system, the six-speed 1200 Bonneville engine is engineered with a 270° firing interval designed for a smoother, more linear power delivery. The richer, deeper burble from the twin pea-shooter style exhausts adds to the character of the ride too. It’s just so easy to ride, from a lightweight clutch lever to a thick gripped throttle and the clear, simple switchgear. Even the Rain/Road mode settings switch is large and simple to operate while riding. Roll off the gas, give the button a flick then the briefest pull of the clutch and the digital display will confirm the mode you’re in. By changing modes, you’re altering the sensitivity of the throttle and how quickly it opens rather than the ultimate amount of power available.

On the left-side of the handlebar is the standard fit heated grip button, neatly tucked against the grip in another example of the high quality finish of the T120. It offers two stages and even in ‘Lo’ mode they are rather toasty, albeit I was wearing summer weight ‘Robinson’ gloves from AlpineStars’ Oscar range.

While I may have been seduced by Portugal’s picturesque coastline and pleasant roads, even a trip along the B1040 on a grotty winter’s morning won’t be enough to dull the spirits that a ride on the T120 creates. The seating position is virtually bolt upright and at 6ft tall, I actually found that shuffling back a little on the seat pushed my elbows forward making my arms even more comfortable on the raised bars. 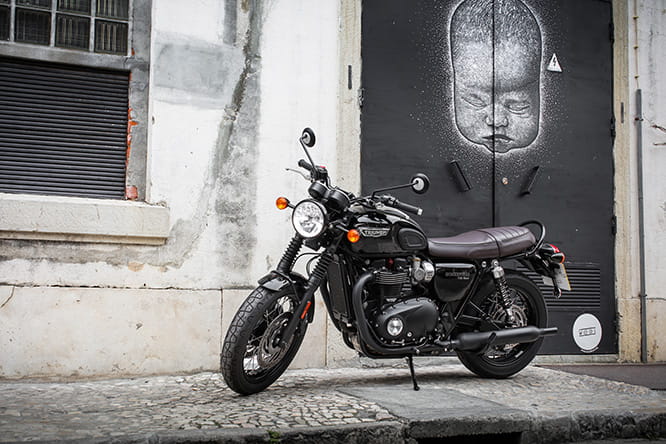 The centre of gravity on the bike is low and the seat height a mere 785mm, ideal for riders of pretty much any height or stature and the foot pegs are directly beneath the front of the seat so even though knees are going to bent further than 90° it’s hardly an unfriendly sportsbike tuck. Neat features such as the underseat USB charging point, LED daytime running lights complete with a smart little Triumph logo in the centre complete the look, feel and quality finish from the Hinckley team.

In terms of safety features, the traction control system is sensitive and cuts in quickly to avoid any kind of rear tyre spin but dulling throttle input almost instantly, although if you’re feeling confident it can be turned off.

The gears are long and while the Street Twin only has five, this T120 has an almost redundant 6th. I only got that far because I needed to remind myself it was there. Such is the gearing arrangement, fifth might as well be an overdrive. Cruising along at 30mph even in second and the bike is only pulling 2750rpm. It does allow for a decent spurt though - twist the throttle and second gear will soon take you beyond 50mph with ease and purpose.

Again, on paper, the twin 310mm front discs should offer ample braking power but that extra timber can be felt when squeezing the brake lever because it feels a little soft. Like the ride itself, the feeling of the front brakes is a little too chilled for my liking. 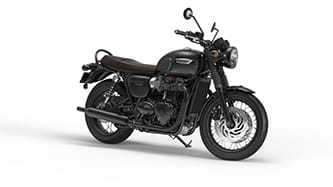 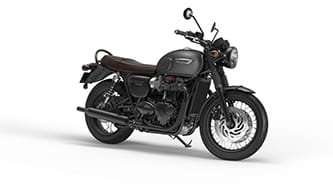 Claimed MPG is 63, 13% up on the previous model which should be easily achievable, while service intervals have increased from 6000 to 10000 miles further enhancing the bang for your buck.

Of the 160+ accessories some are interchangeable with other models though many are dedicated. It’s the type of modern day templates that can be personalised with the range including optional the delectable Vance & Hines slip-on silencers.

Triumph have even done some of the work for you by creating their own ‘Inspiration’ kit, known as ‘Prestige’ and includes the aforementioned silencers, ribbed and stitched seat and chrome engine covers – yours for an extra £1170 not including fitting. 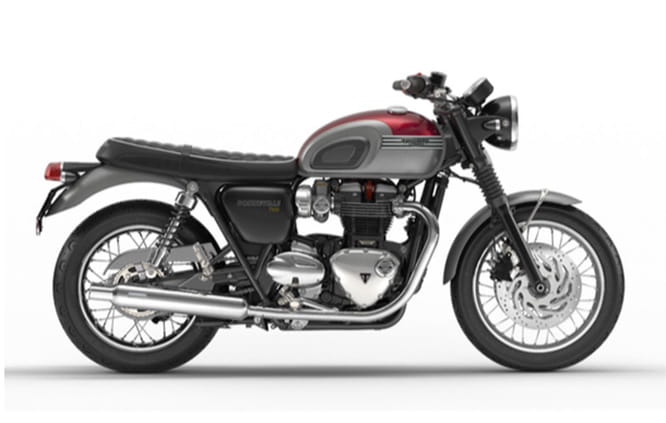 Once you go Black

The difference between the standard T120 and the T120 Black are colour related. The wheel rims, grab rail, engine covers, mirrors, headlamp bezel, indicators and exhaust are all blacked-out components while the Jet Black and Matt Graphite colour schemes with brown seat are also exclusive to this model. 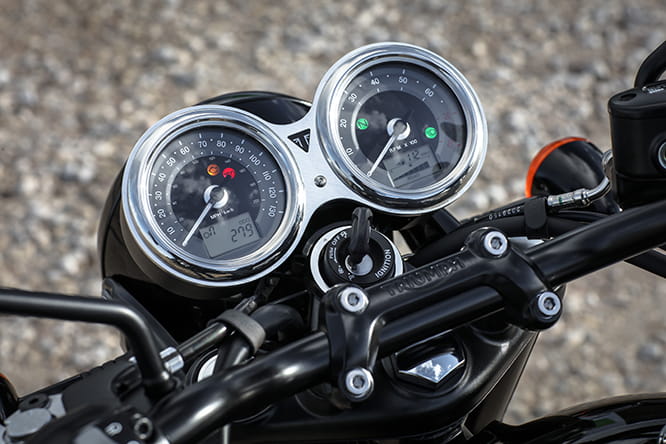 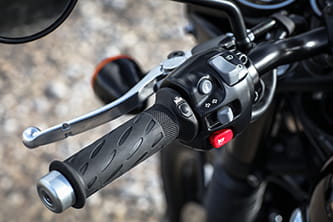 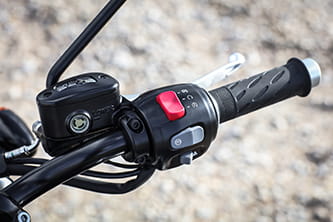 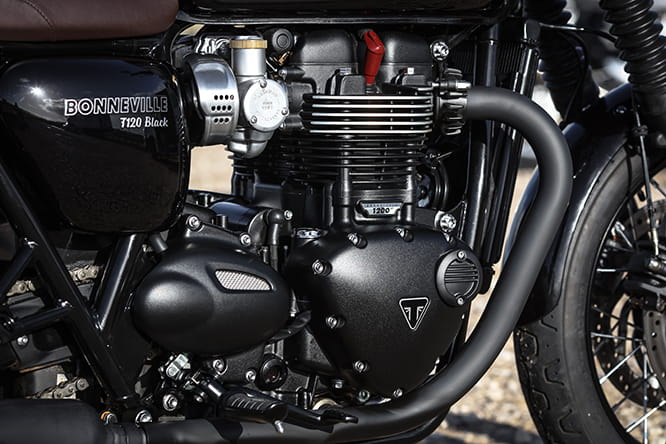