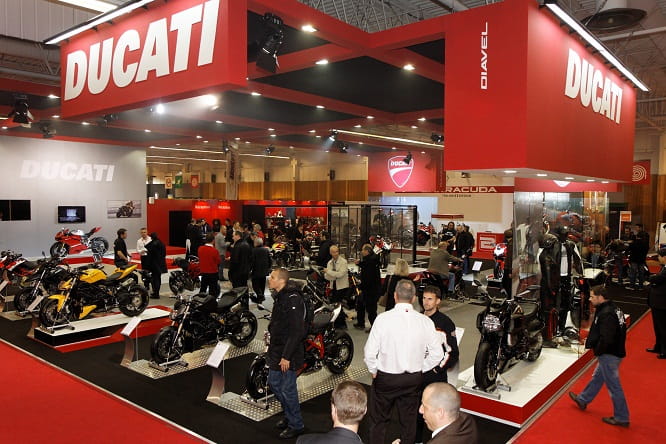 Ducati are set to be the first manufacturer out of the blocks by showing a new model for 2017.

The ninth World Ducati Week (even though it’s over three days) takes place over the weekend of 1st – 3rd July at the Marco Simoncelli Misano World Circuit and Ducati have today confirmed they will use the opportunity to announce a new 2017 model.

The new machine will be previewed in an exclusive “closed room” at the event alongside a special Ducati 90th anniversary edition bike.

Very little information about the new model is available but possibilities that would fit naturally in the existing range include a ‘mini-Multistrada’, using an existing 821 or 939 engine, which pitches it around Yamaha’s recently renamed Tracer 900 and the forthcoming Tracer 700 as well as the KTM 1050 Adventure and Tiger 800 range for example.

Alternatives include a larger capacity Scrambler or one of two versions of the Monster; touring edition, like a Monster Strada or even a 1299 Monster to compete with the more earth-shattering super nakeds such as Aprilia’s Tuono V4 1100RR.

Meanwhile, rumours are surfacing about what the 90th anniversary bike could be with one Bike Social source placing their money on a special edition 1299 Panigale, possibly a mix of the 1199R and the exquisite Superleggera.

We will bring you updates early next month, if not before.

Ducati have already released nine new models for 2016 including the Monster 1200R, 959 Panigale and XDiavel but the stringent Euro 4 emission and noise regulations are putting manufacturers under pressure to ensure new or revamped models comply in time for 1st January 2017.

World Ducati Week is the ultimate get-together for fans of the Bologna-based with appearances from their factory Grand Prix and World Superbike riders past and present including Casey Stoner, Andrea Dovizioso, Andrea Iannone, Loris Capirossi, Scott Redding, Troy Bayliss, Rueben Xaus and Chaz Davies. The riders go head-to-head in a series of on-track challenges while fans get to enjoy parades, track time, contests, test rides, stunt shows at the weekend-long Ducati-focused party.

Here’s the official trailer for WDW2016: