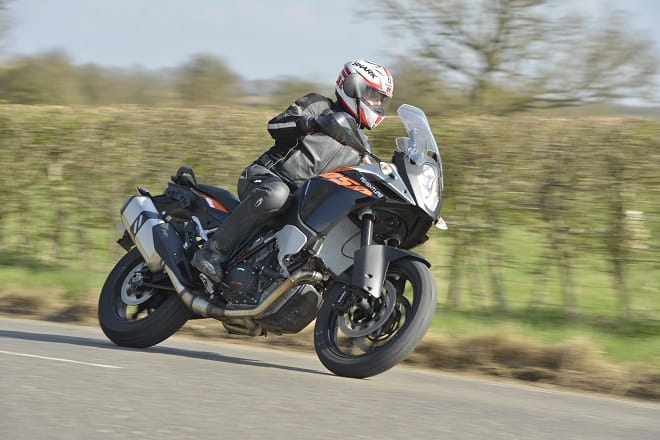 But did KTM need another adventure bike meaning this four-bike range is only covered by less than 250cc?

Thankfully, the Austrian’s thought so. 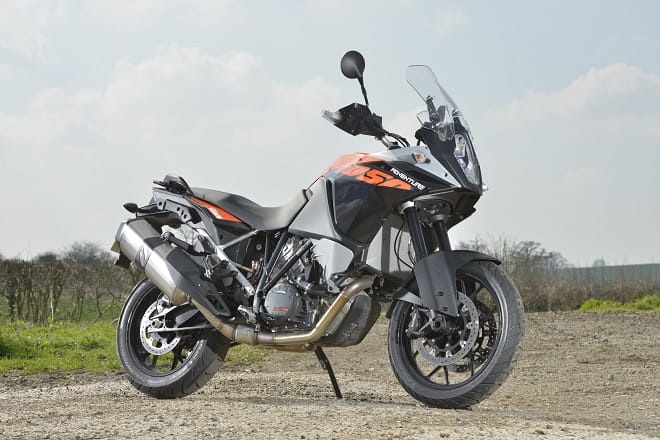 The 1050 Adventure uses a revised version of the existing 1195cc, 4-stroke, liquid-cooled, V-twin engine to produce 1,050cc. Bore and stroke were reduced from 105mm and 69mm to 103mm 63mm respectively while low-rev performance was enhanced to offer a very healthy and surprising mid-range torque. The first time I rode the 1050 Adventure I’d just hopped off the extraordinary 2015 Yamaha R1 after speed runs at Bruntingthorpe proving ground so I wasn’t expecting eye-popping performance.

Though the spec sheet shows max power of 95bhp at 6,200rpm and 79 ft-lbs of torque, on paper the bikes performance doesn’t immediately appear mind-blowing. Ok, it’s not designed to challenge litre sports bikes off the line but it’s got plenty of grunt to startle. As you’d expect from a V-Twin, the lower revs are soft and unintimidating but mid-range is where it springs alive. If accelerating hard with throttle wide open, the little red needle soon powers ‘round the tachometer to the 8,500rpm limiter and if the stutter in performance isn’t enough to prompt an up-change, a red flashing light on the instrument panel will be. That said, the torque curve peaks at 6,500rpm so changing up before limiter is wise move for more rapid forward propulsion. 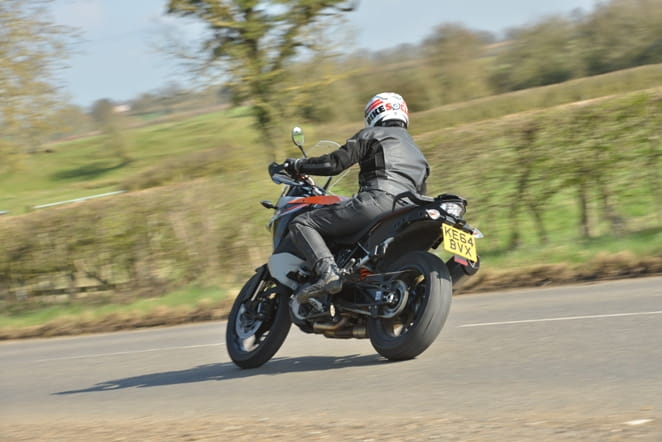 The bike can be restricted to conform with A2 licence regulations which encourages less experienced riders a great opportunity to step up to a big traily bike. This option simply restricts the amount of throttle offered which in turn restricts the power. Naturally, it can be derestricted once the appropriate test is passed.

For the shorter rider it is worth noting the standard-fit seat height is not adjustable. While it is the lowest in the KTM adventure range, at 850mm it’s taller than all of the aforementioned rivals except the highest setting on the Tracer. Weighing 212kg (dry), the KTM isn’t a heavyweight in its class and has a narrow enough seat/tank to make the bike easy to manoeuvre around town and in the faster corners. WP suspension and standard-fit Metzeler Tourance Next road-biased tyres offer excellent stability in the corners and overall the 1050 impressed on the road, it felt easy to ride. This is helped along with the ride-by-wire throttle which makes acceleration non-hesitant or juddery. Couple the torquey mid-range and an agile balance and you’ve got a practical, versatile bike with enough power to get the adrenaline pumping. 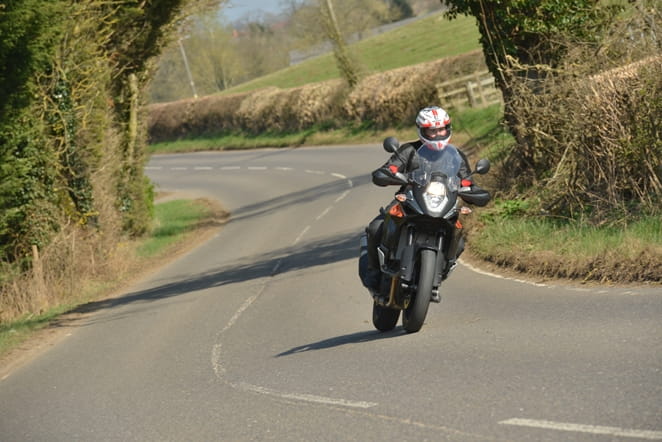 The one-piece rider/pillion seat is shaped well for a comfortable riding position but after an hour or so on the bike I found it a little firm. Firm enough to want to stretch my legs and move around the seat but not bad enough to stop and get off. As with the 1190, KTM offer an accessory seat as an optional extra. When riding two-up my pillion, the 5’5” Mrs Mann, noted the comfort of her seat position particularly with its height. She pointed out minimal wind buffeting behind me and that the foot pegs were positioned low enough down the sub-frame to be comfortable and not too tall to mount/dismount ungracefully.

In terms of additional comfort and riding position options, the windshield is adjustable but not on the move. Unlock two clamps with a quick flick and the screen slides up or down through 25mm and at 6ft I would certainly recommend the highest possible position unless you fancy tucking in. The handlebars are wider than the 1190 and are adjustable through 20mm while the foot pegs are adjustable by 10mm. 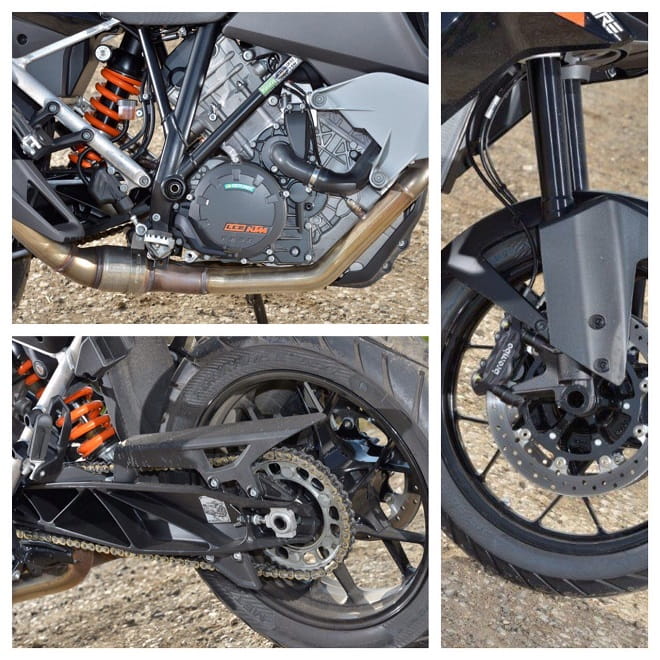 Technologically, the KTM offers plenty of options to tailor the ride depending on road and weather conditions. ABS is switchable as is the clever MSC (Motorcycle Stability Control) lean-sensitive cornering system which can be found on the 1190 Adventure and 1290 Super Adventure. The three riding modes offer a choice between Sport, Street and Rain – each offers a differing degree of available power and traction control. Off-Road mode is an optional extra and can be fitted subsequently.

The left-hand side of the info-packed instrument panel is operated by a four-way directional pad, back and action buttons on the left-side of the handlebars. It’s fairly user-friendly although looks-wise is a little dated and dull yet offers plenty of information. From MPG to tank range, date/time to odometer there are plenty of options to select for your Favourites page.

While on the right-hand side of the dashboard is a large, analogue rev counter and digital information including gear change indicator, time, fuel gauge, speed and current riding mode. 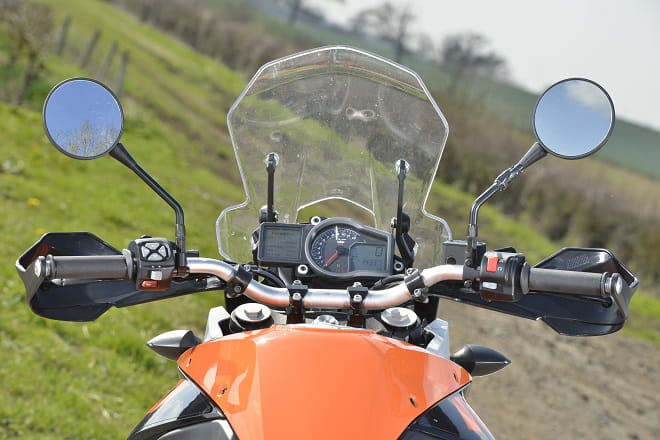 The KTM is a handsome bike: tall with striking over-and-under headlights and  but it does lack a centre stand and, in the changing face of traily bikes, is propelled by a chain and not shaft-driven which offers an understanding to the lack of actual off-roading owners are likely to be doing.

One minor irritation is the fiddly ignition location which is particularly difficult to engage the steering lock and remove the key if you have a key ring or any additional keys.

The tank’s 23-litre capacity should give a range of about 200 miles under normal riding and on our test we managed 45mpg. Service intervals come along every 9,300 miles.

Next week, we'll be publishing our UK road test of the KTM 1290 SuperAdventure - the largest capacity in the four-bike range.

Gloves: BMW Two in One