Our spies have caught not one but two new KTMs under development at the companies favoured testing grounds in Spain – a revised 1190 Adventure and the completely new 890 Duke.

The Duke is one of KTM’s biggest projects in years. It’s powered by a completely new parallel twin engine and will give the firm a machine to compete with mid-sized naked bikes like Triumph’s Street Triple and MV Agusta’s Brutale 800. 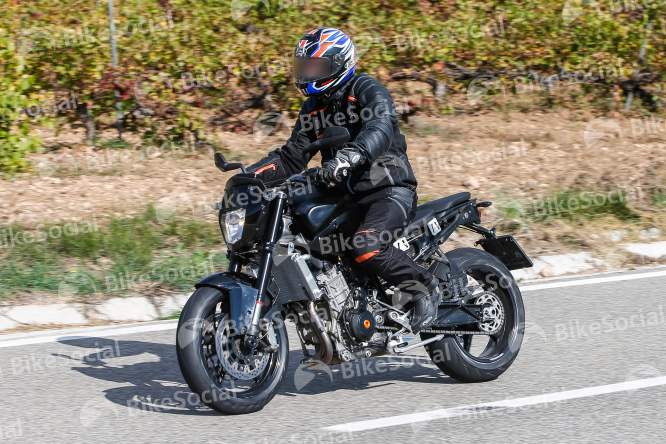 The engine, with a capacity somewhere between 800cc and 900cc, is expected to make around 100-115bhp, but importantly it will be cheaper to manufacture than the firm’s V-twin engine, allowing the new bike to compete in a different part of the market. Inline engines (like a parallel twin, inline triple or inline four) are less expensive to produce than V twins or V fours simply because they contain fewer components. There are only two camshafts, for instance, rather than four.

The new 890 Duke was first spotted last summer, but the latest pictures give a clearer view of the bike.

The chassis is typical KTM, with a tubular steel frame and ribbed, aluminium swingarm, but this bike is still in early stages of development. Check out the wat the seat has been designed to be adjusted and the multiple holes for pillion pegs – the firm is clearly still working out the riding position.

The new 1190 Adventure is clearly testing an updated front fairing, with a new screen and headlight. The screen has a redesigned set of brackets behind it, clearly offering some level of adjustment, and the light – hidden under tape on this bike – is likely to be reshaped. 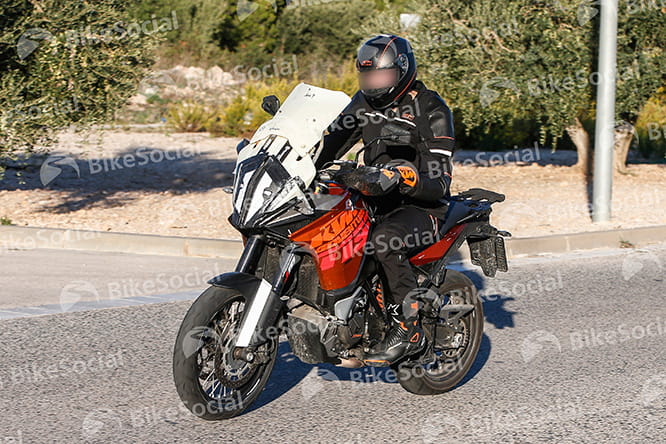 On this prototype the forks appear to be the ones from the 1190 Adventure R, but our spy says that the plan is to fit the production version with the electronic suspension from the 1290 Super Adventure to the final version. Other updates are likely to be intended to make the bike comply with the revised European regulations coming into force at the start of 2017, which include Euro4 emissions limits.

While the new 1190 Adventure will be ready for production in 2017, the 890 Duke is a little further off. It’s believed that the machine won’t appear at shows until the end of 2017, and will go into production as a 2018 model. By then the appearance might well have changed significantly.