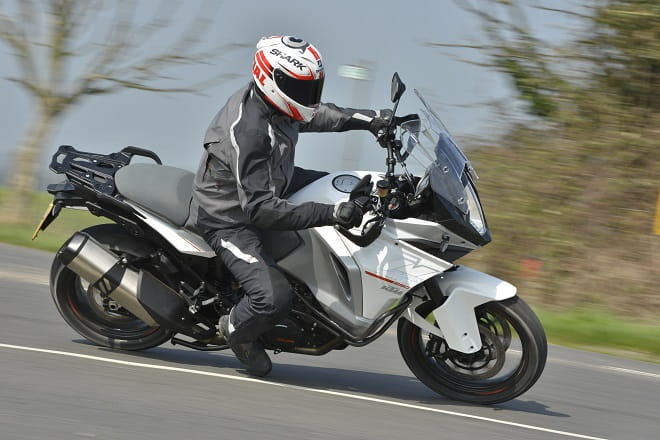 Last August, the inbox made its pinging noise as an email from KTM drops in. The Austrians had officially announced an addition to their adventure range, the flagship model no less, with “more power, more torque and more luxury”. Oh yes, the 1290 Super Adventure had arrived to go toe-to-toe with BMW’s GS and Ducati’s Multistrada.

The Bike Social team gathered around the screen like teenage girls cooing over a photo of their favourite One Direction person.

Then maths took over. Not for the girls, for us. Looking at the basic components, a 1301cc, V-Twin engine based on the loony 1290 SuperDuke R produces 160bhp and has been merged with the qualities of an 1190 Adventure. Then a mass of luxury settings and electronic gadgets that rival a modern day Formula One car were combined with the comfort of your favourite sofa and a tank the size of a camel’s, and a new sports-adventure machine was created.

We spent a hugely satisfying week with the 1290 SA which included the daily commute, letting it loose in a quarry as well as munching the motorway miles to Goodwood and back. And we’d do it all over again. 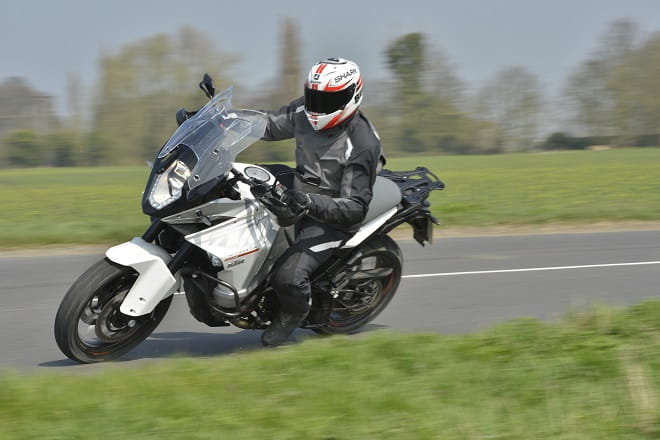 The first thing one notices with any bike is its physical form and the KTM is an imposing machine, even for the 6 footers. Tall and broad with a sizable (and adjustable) screen, big headlight and protective engine bars give the KTM its tough, masculine appearance. Yet its shapely, angular fairings and lack of unnecessary clutter also give the bike a strong, athletic look. Given its size there’s still an attractive symmetry to the bike helped by the three-stage LED cornering lights above the engine bars of either side which are designed to shine further round the corner depending on how far you lean.

At 229kg without fuel it’s 12kg heavier than the 1190 (mainly due to the bigger tank, heavier crank, and additional cornering lights and crash-bars). Its hyper-comfortable two-part seat is slightly wider but the same height, adjustable between 860 and 875mm albeit a bit fiddly to do so.

The one-piece handlebar is slightly higher and also adjustable horizontally by 10mm. The footrests have two positions, diagonally by 10mm and, as usual, the brake and clutch levers have five of their own settings. These settings are all well-and-good but our photographer claims to be 5' 6.5" and rides a BMW R1200GS so is used to tall bikes but he struggled to get onto tip-toes on each side so didn’t feel comfortable.

Equally noticeable for those encouraged by its size to use it for its supposed off-road abilities, is the fact that it’s chain-driven which isn’t normally associated with riding through muddy trails due the potential for clogging and difficulty in cleaning. Realistically though, how many owners will even take the 1290SA out in the rain?

Even if they do then there are four Traction Control settings available through the vast array of KTM electronic options, all affecting the engine modes. The 160bhp is controlled or even restrained by one of these four, all can be activated while on the go although the throttle needs to be closed for a second to activate – don’t worry, the electronic display will tell you what to do:

The three-part instrument panel offers a 0-12,000 analogue rev counter in the centre surrounded by the usual riding display including digital speedo, gear indicator, current riding mode and fuel gauge on one side. While opposite is a comprehensive digital menu operated by a four-way control located on the left-hand bar. The system, while a little dull in display, is easy enough to read and fool-proof to operate, even allowing you to create your own ‘Favourites’ page if, for example, the date, oil temperature and current mpg all visible on one page is your bag.

The other riding options controllable include heated grips, a twin-part heated seat where the pillion even has their own temperature control and semi-active suspension with four damping modes. Cruise control comes as standard and is as simple to use as it looks. On the right-hand bar is on/off via the push button then it’s select and re-set. No more to say really. 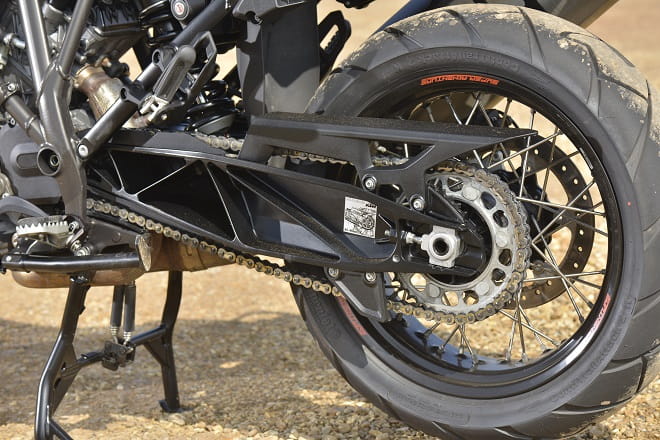 But it’s the mighty engine and the cornering ability of such a large machine that perhaps surprises the most. The 1290SA’s power is impressive enough but the torque, best in its class, is worthy of medals. Naturally on dry roads and a sunny spring UK day the bike was set Sport mode and thrown around accordingly, all in the name of thorough road testing you understand.

Its low-rev grunt and straight-line performance are incredible. A ride-by-wire throttle ensures an ideal and smooth response to even the most heavy-handed madman while clutch lever that’s lighter than air aids operation of strong, butch and almost agricultural gearbox. This is good thing. The bike’s excellent fuelling also adds to its smooth power delivery and helps it perform like a supercharged tractor. Then it gets to the corners and you’d assume that for a tall, heavy machine it’s not going to offer much in the way of confidence. And you’d be wrong.

Hurl the KTM towards the turn and the superb 320mm ABS-enabled twin-disc Brembo’s allow plenty of trail braking into corner while the long travel suspension doesn’t fold and get all wallowy. Continental’s ContiAttackTrail2’s on the 19” front and 17” rear spoked wheels offer plenty of grip and it’s all quite entertaining. The V-Twin sits low in the chassis while the majority of the huge 30 litre fuel tank is positioned well enough to create a lovely balance, KTM really have done a great job with the Super Adventure.

On the wide open roads, the bike soaks up the miles while returning a fine level of comfort. The seat is plush and comfortable enough for a complete one-hit ride from full to empty - tank not bladder – which should be as much as 250 miles. The screen looks like it’s had millions spent on it with wind tunnel development with crafted lines and aerodynamic holes and it does an admirable job although could be a little visually obstructive. Unscrew the oversized knobs and its adjustable on the move. As with the 1050 Adventure, 6th gear acts like an overdrive and is ideal for motorway cruising as are the handguards and various heated apparatus.

This gentleman’s power tourer even has a BMW RT-style hill-hold stopping it from rolling backwards. The bike keeps the brake applied until the rider accelerates away. 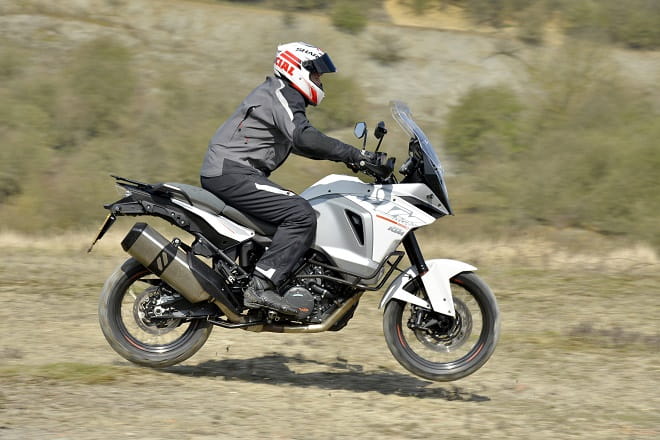 We even had the chance of riding on some looser surfaces in a local quarry and while the Continental’s are much more road-biased they still allow a degree of off-roading. Selecting the relevant mode in the menu means the power and traction are cut enough for easy wheelspins in front of the camera. The ABS still cuts in too much in the standard mode but can be adjusted in the on-board menus. The downside to taking the 1290 off-road is its weight and height meaning it’s harder to manoeuvre in tight spots. 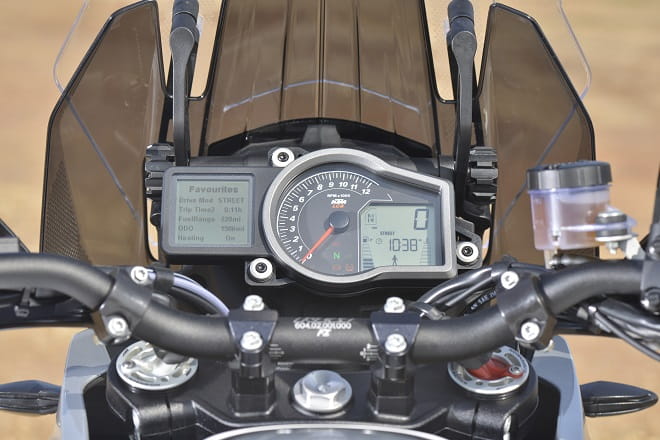 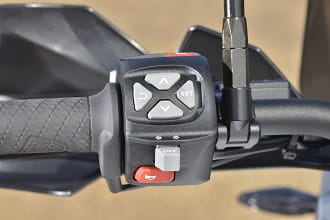 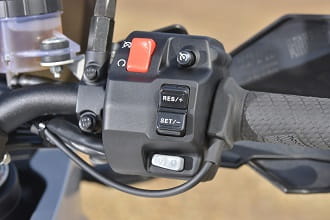