Meet MV Agusta’s middle weight supernaked. The virtually all new-for-2016 three-cylinder 800cc machine sits proud, its chest puffed out, like a father with his new-born first or a fighter who has just won a world-title. The aggressive, arrogant stance of a bike combining the front end of a supernaked with a supersport rear.

15 years and 30,000 sales after the original Brutale, the latest incarnation is a true Italian masterpiece, a work of art and one of those bikes that just looks fast while standing still. Stunning lines with supermodel-esque curves in all the right places and quality craftsmanship just oozing from every nut and bolt. Forgive me for drooling a little here but this is a bike that cries out for love and attention. You don't keep something this on the street or in your driveway draped in a flimsy cover, it deserves a place in your living room. Relegate the dog because the Brutale 800 will become a member of your family.

Let’s address the elephant in the room early. The price. At £10,499 it’ s almost £1000 dearer than its nearest rival, the Monster 821 Stripe from Ducati but read on because this Italian beauty could be worth every penny. The Brutale 800 is 75mm narrower, 8kg lighter, has an 80mm shorter wheelbase and that’s before it plays its trump card; the quickshifter. More about that later but certainly having ridden 80-odd miles up and down the famous Ronda road north of Malaga in Spain at the world riding launch, I could be convinced. This calls for a group test. Stand by Bike Socailites. 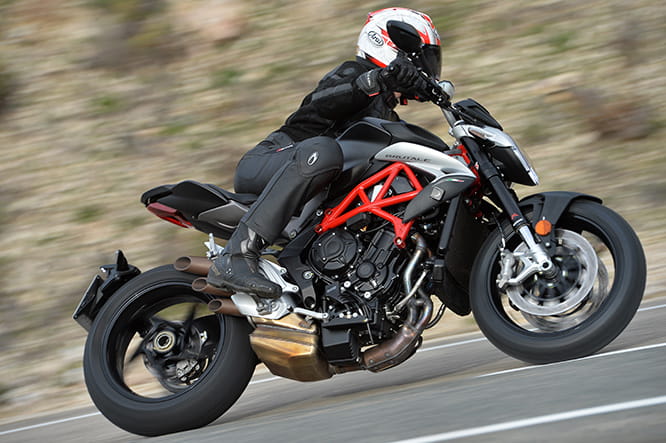 In essence the whole bike has been redesigned, it now meets Euro 4 emissions regulations, there’s less power but more torque. A larger fuel tank and greater economy plus LED headlight and Daytime Running Lights (DRL). The triple exhaust pipe and system has been remodelled and increased in size. The frame and subframe are sleeker and more streamlined while the high resolution LCD instrument panel, retractable passenger grab handles and a new ‘Engine Map’ button on the right-side handlebar are all rider friendly aids.

The lightweight Brutale 800 (175kg dry) feature the latest evolution of the three-cylinder unit and features revised cam profiles and timing plus new pistons. According to MV the focus was to “enhance response at low/mid revs” which are the most relevant to standard road riding. And they’ve struck gold.

While power output has been reduced from 125bhp to 116bhp, torque is up by 25 per cent to 61ft-lb and the spread of that torque has also been revised, “for balance” say MV. Here’s the kicker; 90% of that torque is available as low as 3,800rpm so while you experience the relative calm existence of tweeting birds and a cool spring breeze gently rustling trees below that figure, roll the very sensitive yet controllable throttle back and chaos reigns…the Brutale 800 shows incredibly fast acceleration for a mid-weight naked. The combination of power to weight ratio plus snappy, precise quickshifter and glorious three-cylinder howl is enough to make you feel very smug. The new engine powers quickly through to its peak of 10200rpm where it begins to loose a little steam. Technically the redline is north of 12000 but your eardrums will burst if you take it anywhere close. Keeping the throttle pinned while you change up and the beautiful dull popping noise of gears being selected within microseconds is worth that extra money. 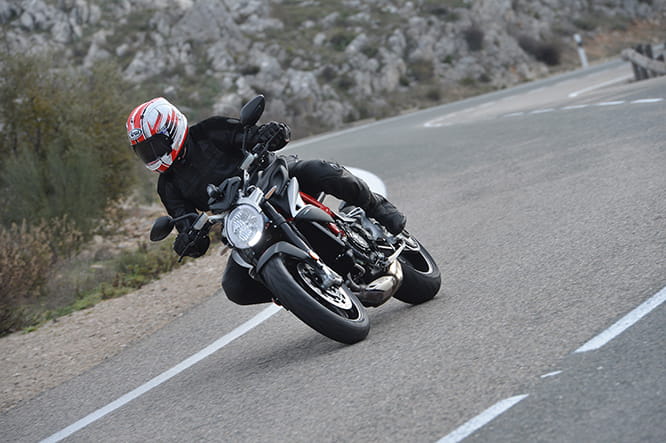 Back down the ’box and the autoblipper works a charm too. A mere tap of your left foot and the MV’s mega electronics sort it all out for you, regardless of throttle position. It’s so good that novelty of changing up and down won’t wear off quickly! The rather heavy clutch lever which has a late bite point is thankfully only required for pulling away, coming to stand and then on the downshift below 20 mph so look out for that in towns and cities.

The Brutale 800’s electronic wizardry doesn’t end there. The bike has three pre-set engine maps plus a customisable one to regulate the ride-by-wire throttle, traction control setting and amount of power on offer; Sport mode is by far the best fit for the sporty characteristics and lively nature of the MV. It’s a rewarding feeling when the full bag of 116bhp is available to power you out of the slower turns. Touring reduces that to 90bhp while Rain takes it down to 80bhp to assist with grip on more slippery surfaces. In Sport mode with traction control in setting no.1 of the 8 available, I cranked open the throttle and experienced marginal slipping of the rear tyre and the front wanted to come up too such is its responsiveness. There’s no anti-wheelie. While at the other end, even though MV Agusta have increased the wheelbase by 20mm and played with the geometry of the rear Sachs monoshock to permit greater weight transfer to the front under braking, naturally I tested this claim and found stoppies rather too easy. Under 30mph, grab a fistful of front brake and almost at the moment the ABS on the double 320mm floating discs with 4-piston Brembo callipers cuts in, the rear wants to lift – though the stiff rear suspension would have also contributed.

The engine maps are very simple to change, on the fly, the easiest I’ve experienced on any bike with this options. A simple button on the right-hand side of the bar allows you to flick through the options, leave it on the one you want and the bike will do the rest. No need for rolling off, stopping, playing with other dashboard buttons or engaging the clutch to confirm.

A raised centre of gravity and an increased distance between seat and foot pegs offer a comfortable riding position though the seat itself while narrow enough at the fuel tank end to allow for shorter rider comfort and to move around in the saddle with ease, is actually quite hard for the bonier bottomed rider. I didn’t mind for the cafe-interrupted 80 or miles covered on the test but wouldn’t fancy a longer trip in one go not unless I could guarantee a bean bag to sit on at the other end.

Sportier than its rivals with the pegs tucked slightly further back encouraging you to lean further forwards adding a bit of weight over the front. The new handlebars have been raised so there’s no extra pressure in the wrists with the revised seating position. The trail is now 103.5mm on the 2016 model, up from 95mm on the previous addition, which too adds to the directional stability and overall agility of the bike in the corners. Because the MV is so compact and light, the high specification components such as the adjustable 43mm upside down Marzocchi front forks and Sachs shock absorber along with brand new Pirelli Diablo Rosso III’s simply add to its almost magical ability in the corners. This set of rubber has never seen before on a production bike as standard before and based on this outing now come highly recommended. The Ronda road has plenty of fast, camber-friendly sweepers with the odd 2nd gear, open-hairpin. Most of it presents good, smooth, grippy tarmac and the Pirelli’s were spot-on throughout. Even in the morning dampness as the road rises to more than 700 metres above sea level.

At times I rode hard, harder than a regular rider in regular conditions. The Bruatle 800 is designed for attack, certainly in Sport mode, and the free-revving motor eggs you on to ride in a manner akin to the mode’s name. The suspension’s standard setting is firm which makes it ideal for smooth and ripple free roads or even track days but don’t go hustling on the B-roads of Norfolk without making some adjustments, or at least pre-warn your local chiropractor. 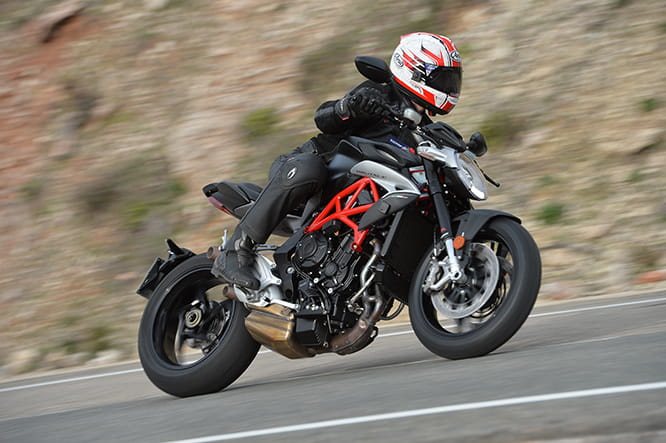 The engine plays its triple tune which even the clever folk at MV Agusta have purposefully engineered not only to refine its note and also to reduce the volume. It’s joyous to listen to, punchy with its performance and fits perfectly with the chassis, quickshifter and the overall look of the Brutale. It’s no good getting into a Porsche and finding out it’s got a 1.4 litre Ford Focus engine under the hood. 798cc of 4-stroke goodness propel the MV along at a hearty rate of knots, good enough for an estimated 50mpg from the 16.5 litre tank which is up from 12.9 litres on the previous model.

The downside to the tank for all its contribution to the attractiveness of the Brutale 800 is its daft, horizontal ‘fin’ on either side presumably to assist with aerodynamics but which is positioned right about where you want the inside of your knee to rest should you be of average height.

While on the subject of gripes, why would you create a smart LCD instrument panel and fill it with loads of information then not include a fuel gauge?

The left-handlebar mounted menu operation button is bit clumsy too – not as user friendly to scroll and amend traction control settings or to adjust the clock for example. At least MV have considered the large and clumsy gloved hands that will operate it and therefore made it large enough.

As is the nature of most three-cylinder machines, it is a little vibey through the seat mainly but nothing to deter from the character of the bike.

What MV Agusta have done with the new Brutale 800 is designed and built an extremely rider-friendly and rider-rewarding motorcycle with the same levels of refinement one expects from the Italian manufacturer. The build quality is obvious from first inspection as well as during the ride. The power to weight ratio, dimensions, top-end components and clever electronics provide a top class riding experience making the extra investment at purchase completely worthwhile. Equally, the company is focusing on developing their dealer network during 2016 and there are already 19 dealers across the UK so here’s hoping the 140% increase in UK sales during 2015 is a sign of things to come. 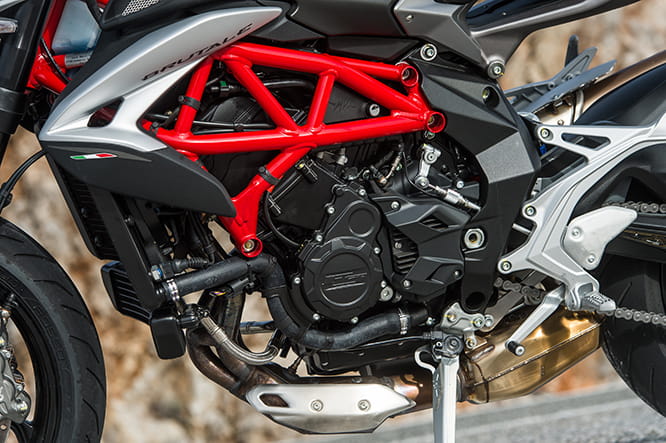 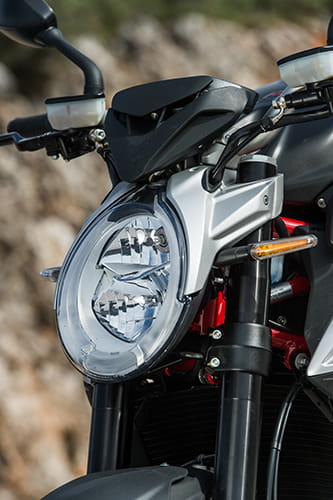 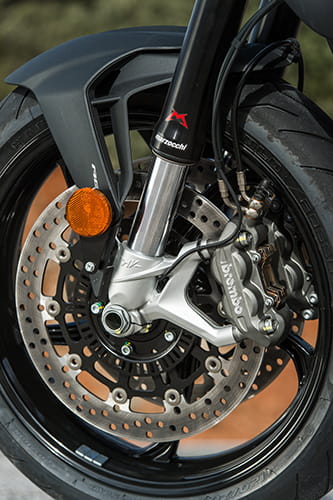 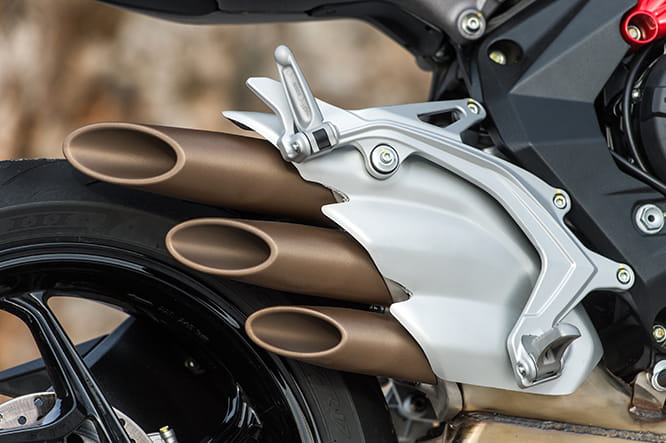 Do you own an MV Agusta? Would you consider it if not?  or