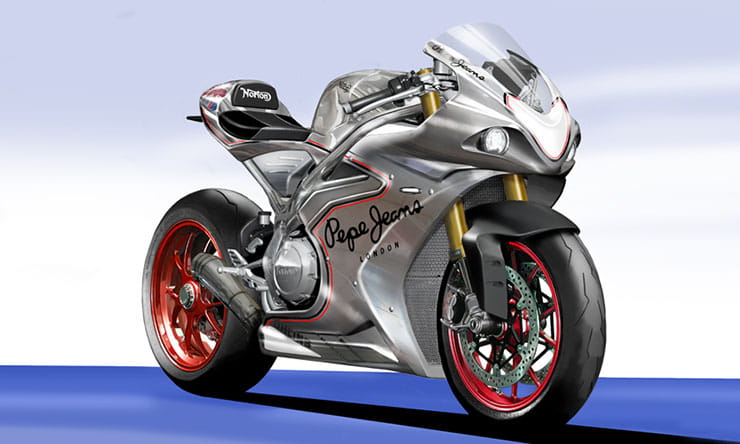 An image has emerged of the new 1200cc V4 that Norton hopes will challenge Ducati in the premium superbike sector next year.

As revealed to Bike Social last year, the new model will be powered by an all-new V4 engine that is being developed in conjunction with Sussex-based Ricardo Engineering. The ultra-compact 72 degree V4 should see the iconic British marque join the illustrious‘200bhp club’ as they gun for the high-end superbike sector that's currently ruled by Ducati's 1299 Panigale.

The drawings of the as yet unnamed superbike have been posted to Norton's website, where they are starting to take enquiries from prospective customers for the new machine. The company has confirmed that the bike, which will be hand built at the company's Donington Hall factory, will be unveiled for the first time at November's Motorcycle Live exhibition in Birmingham.

The picture reveals a radical yet elegant machine presented in the chrome finish of Norton's SG5 TT racer that Dave Johnson took to a near 131mph lap and seventh place in this year's Senior TT. There's a hint of Triumph's T595 and Daytona 675 in some of the styling cues, notably the shape of the tank, nose cone and the frame design, but beyond that the in-house design owes little to anything else currently in the market.

It's little secret that Norton has been using its Aprilia-engined TT project as a chassis development project for the superbike project, and although the finished designs appear to share no major components. Out has gone the racer's conventional swingarm, to be replaced with a Ducati-style single sided item, while suspension and brakes are, as expected, the best that can be provided by Ohlins and Brembo respectively.

For a traditional brand, expect to see a bike packed full of technology, with cutting edge electronics, semi-active suspension and an innovative system to replace traditional mirrors. The new Norton will feature a rear view camera instead of mirrors, improving the bike's aesthetics and giving the rider a much clearer rear view through a dashboard mounted display unit.

Norton has confirmed that an initial run of 200 limited edition bikes will be built, after which we would expect a lower cost 'standard' version to become available. Using the Panigale R as the benchmark, we'd expect the base version to come in at a touch under £30,000 and the limited edition model, which will feature more extensive use of carbon fibre, should be in the region of £10-15k more.