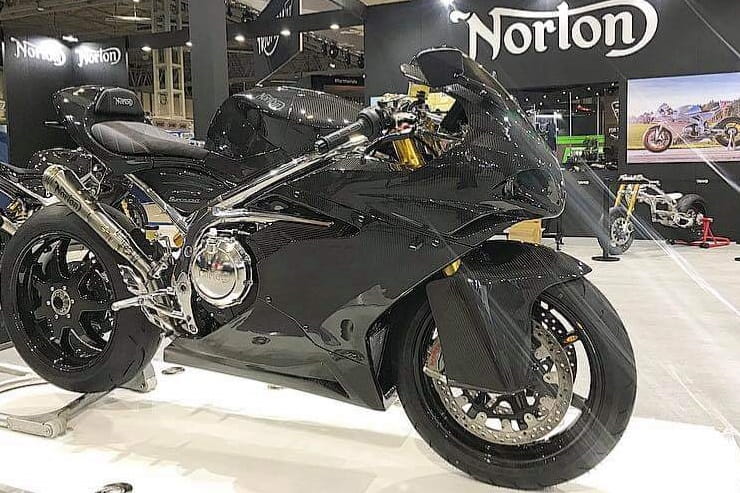 Just days ago Norton unveiled its first water-cooled parallel twin 650cc machines – the Atlas Nomad and Atlas Ranger scramblers – and now it’s added a lightweight sports bike into the mix in the form of the new Superlight, unveiled at Motorcycle Live at the NEC in Birmingham.

Looking almost identical to the £28,000, 200bhp Norton V4 RR superbike, the Superlight is based on the same 650cc parallel twin that’s used in the Atlas models. Basically made from the front cylinder bank of the V4 RR’s 1200cc four-cylinder engine, the twin gets an enlarged 61.5mm stroke, up from 56.8mm, to gain an additional 25cc per cylinder. It keeps the superbike’s wide 82mm bore, and that short-stroke, big-bore combination means it can rev higher than you’d expect from its layout.

While the Atlas version of the engine makes 84bhp at 11,000rpm, the Superlight doesn’t peak until 12,500rpm, when it’s making an impressive 105bhp. That increase comes in part from a higher 13.4:1 compression ratio, compared to the Atlas models’ 11.5:1. Like the Atlas, it uses a 270-degree crank to mimic the firing pattern of a 90-degree V-twin. Norton claims the engine meets all the latest Euro4 emissions targets, but that the addition of a titanium, race-only exhaust system will boost power by an additional 6bhp.

A tubular aluminium frame, much like the one used on firm’s increasingly competitive TT race bikes and the V4 RR superbike, carries the engine as a stressed member, and features an adjustable swingarm pivot and steering head. The stock head angle is a steepish 24.2 degrees, promising sharp handling when combined with a short 1399mm wheelbase and the bike’s 158kg dry weight. That’s equivalent to around 180kg, ready-to-ride, once loaded with oil and water and when the 18-litre, under-seat fuel tank is filled. The race exhaust is claimed to cut that weight by another 6kg to 152kg dry.

That fuel tank is carbon-fibre, as is all the bodywork and even the BST wheels. The running gear is pure high-end superbike stuff; Ohlins NIX 30 USD forks and a TTXGP rear shock – fully adjustable, of course – are allied to Brembo M50 radial brakes.

Of course, none of it comes cheap. Norton has slapped a £19,950 list price on the bike, which is sure to make it a rare beast.

One place where you will see the bike, though, is at the TT, where Norton will be competing in the Lightweight class that’s been dominated by Kawasaki-engined 650cc twins for years. Based on its specifications, it should instantly be a front-runner.